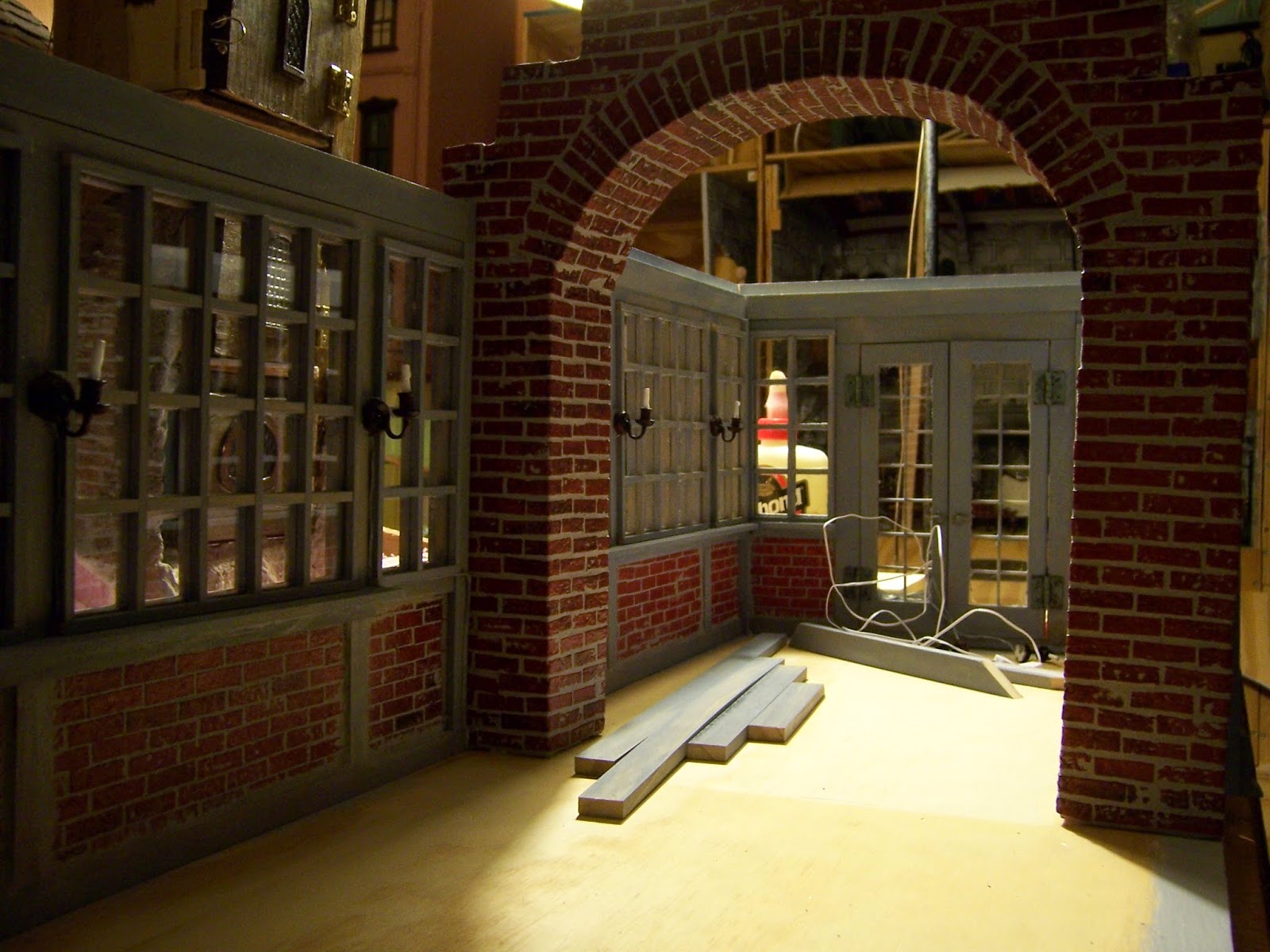 You Would Think Nothing Had Been Done....

Progress on all fronts is Excruciatingly Slow, Dear Readers, and it is not for lack of trying! The above picture is the present condition of the Conservatory, after a week spent working at it! Does it look as if anything at all has been done? Well, if you know where to look you will see the tiny bits of progress! The wires on this end back wall have been glued "out of sight" under the window ledge which has also been glued on! The most important detail, though, is virtually invisible.... The walls have been glued in place! 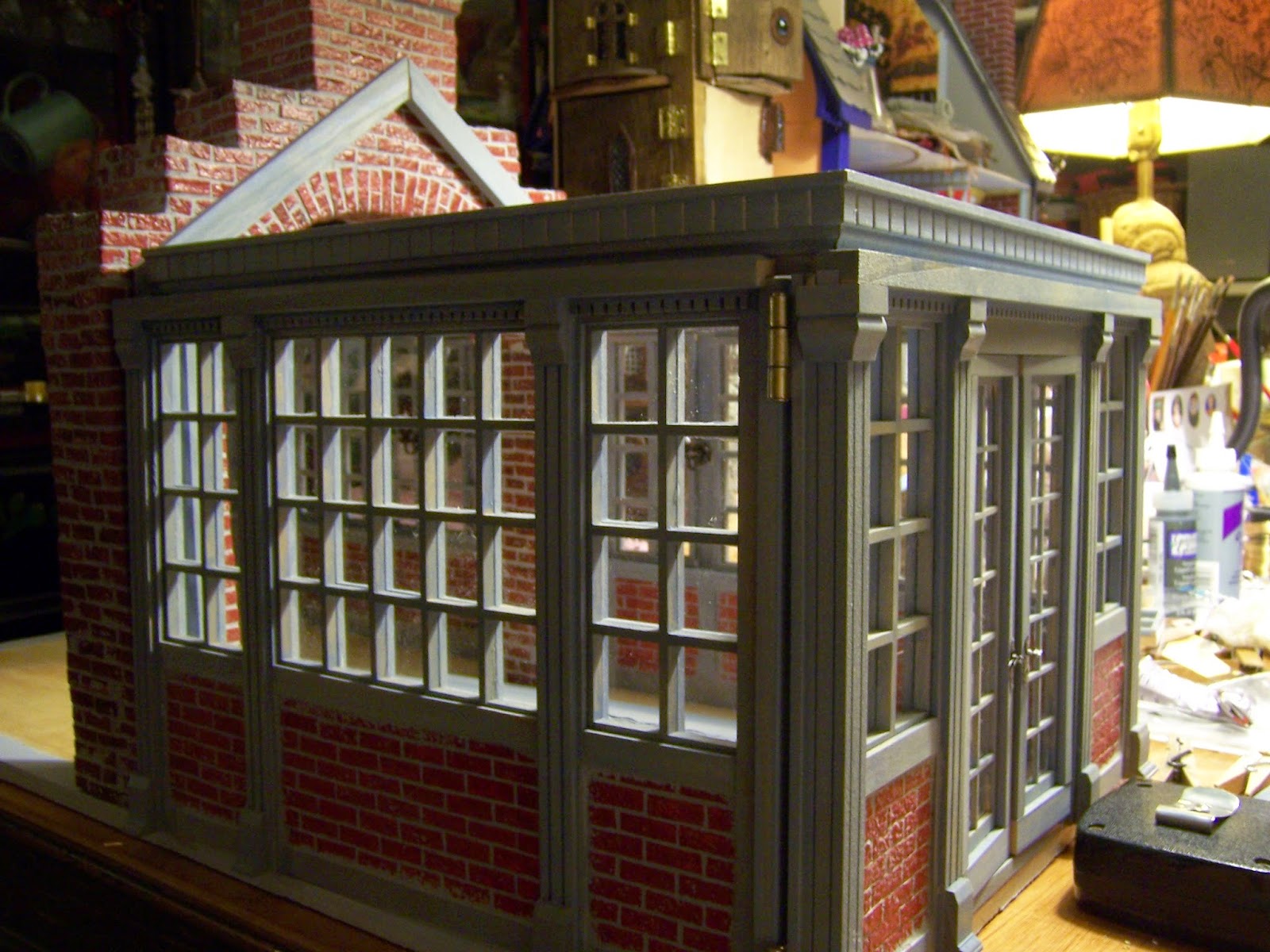 And with the wall at the end glued firmly in place,
I could complete the cornice section over the wall which opens...... 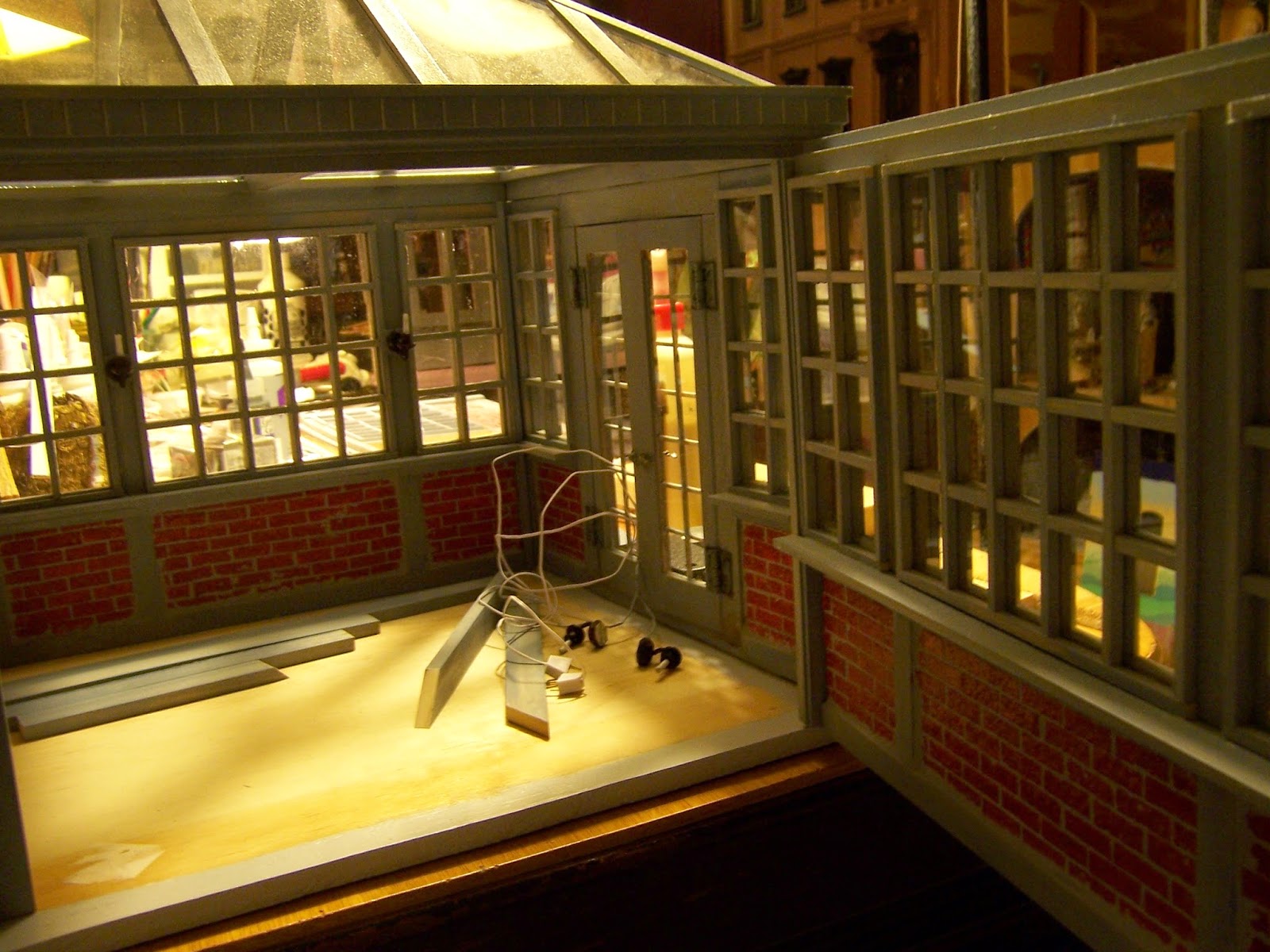 Which you can see here with the wall opened and the roof in place,
supported by the new cornice which does not open! 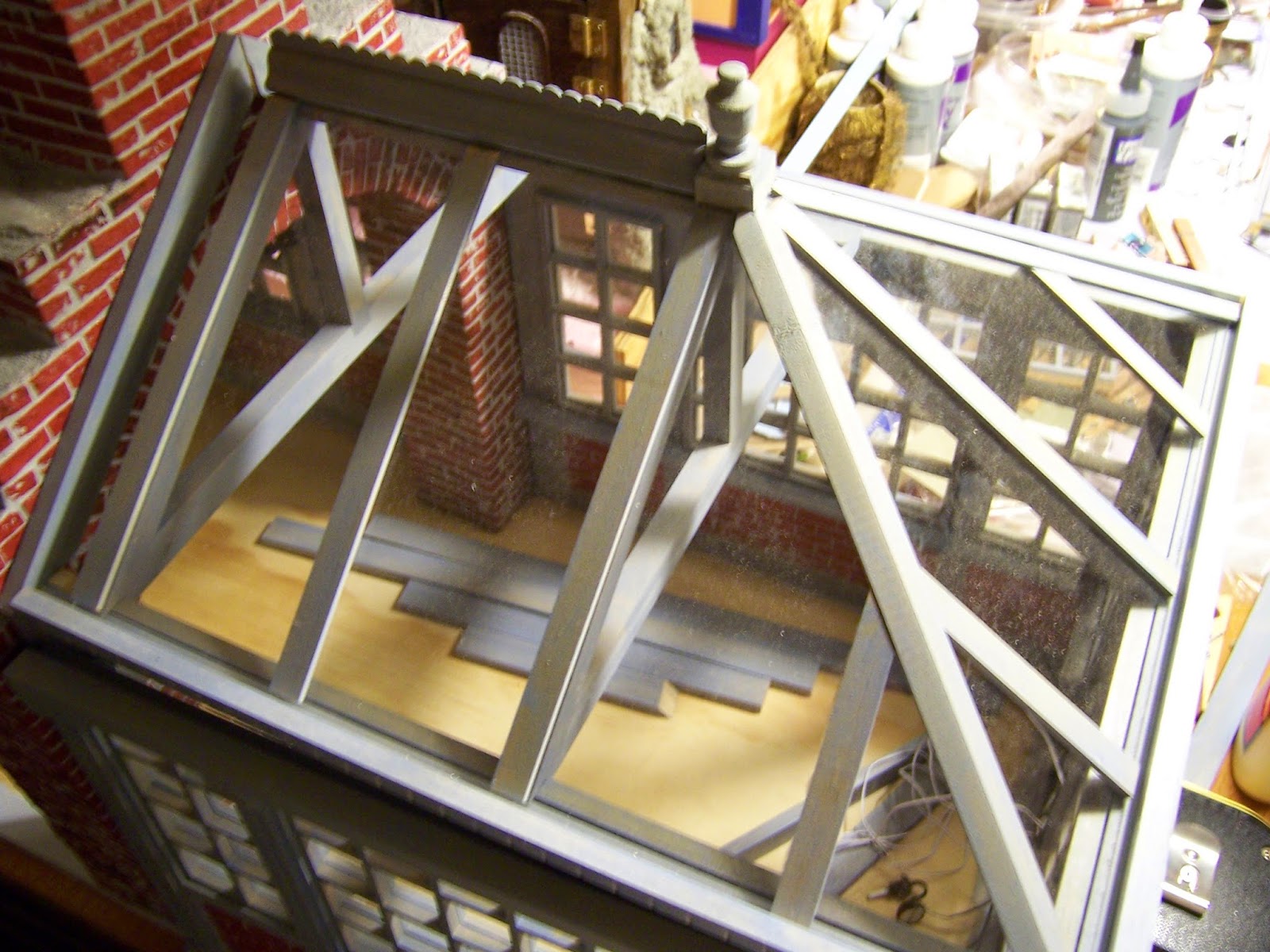 Here is the view from above....
The roof sits on the lip formed by the new cornice
and the support beam I added at the top of each wall.
And every little step needs to be carefully thought through....
in case something is being forgotten....
or an unforseen snag arises! 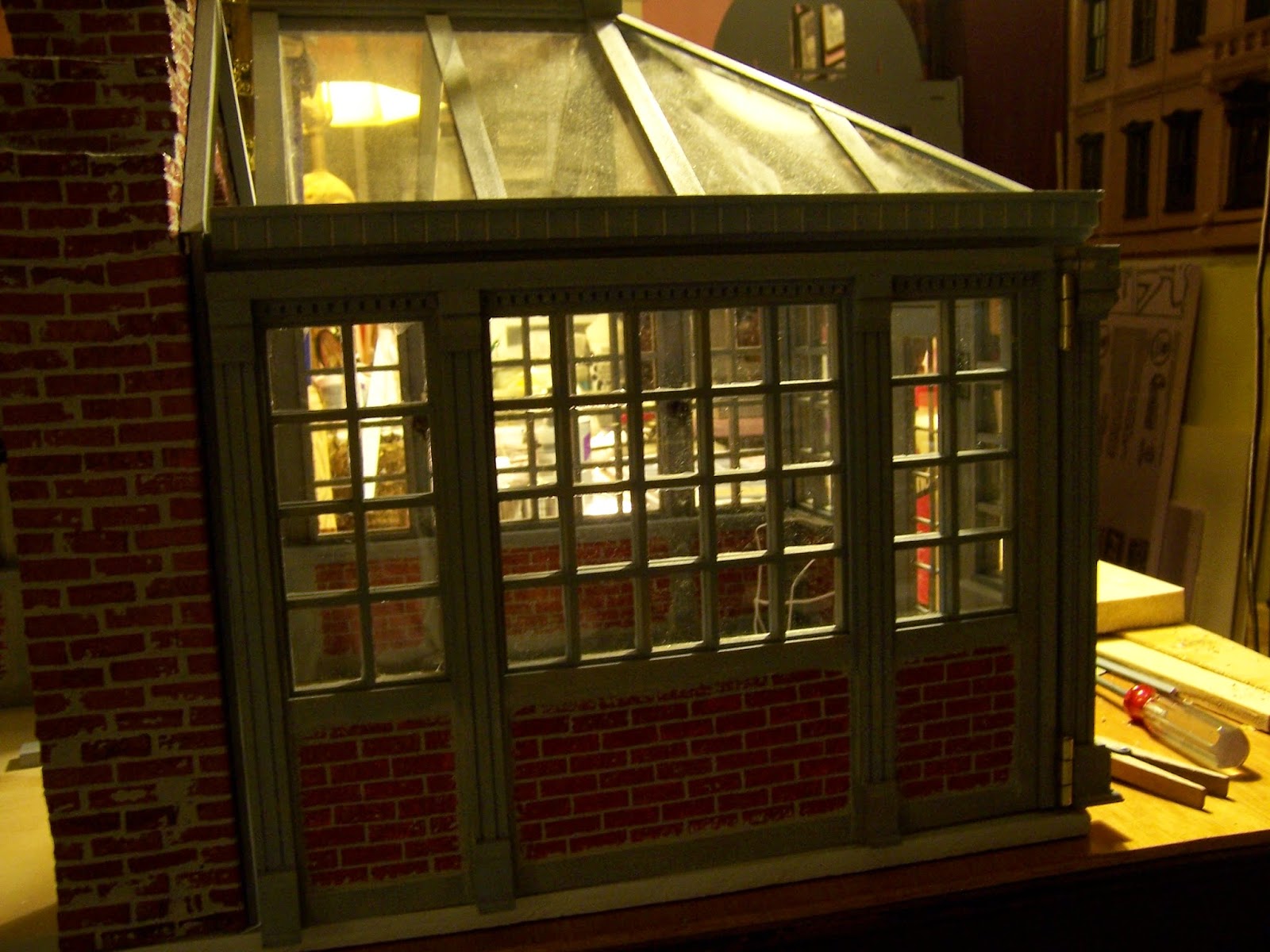 I have not glued the roof in place yet...
but the walls for this end are all attached.
And a start has been made on the other end.....
But as I mentioned last week,
it presents an entirely new set of engineering challenges!
The chief one being the relocation of the wall with the doors to the side of the structure.
One tiny detail I had ignored was that the door wall
is one half inch narrower than the side walls.
This means that when I swap them,
the "end" wall of the conservatory on this end
will be a little wider than on the other end! 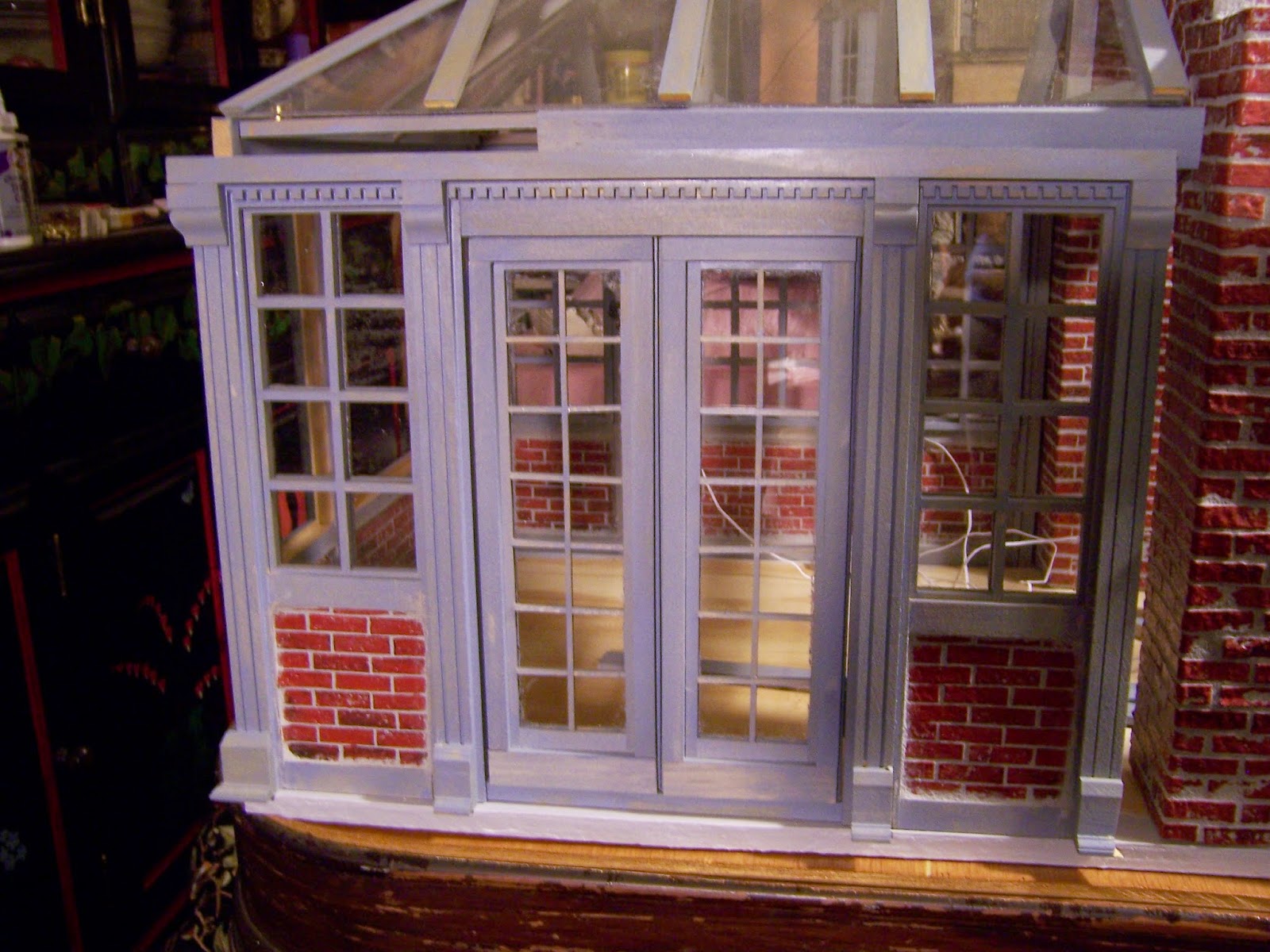 But we are going to overlook that trifling detail.....
and maybe just "pretend" that it was built in two sections.....
and they didn't measure exactly.....
or maybe since it is very old....
the walls sagged and are no longer equal.
So when I figure out how to fit the sections together.....
there will be more progress. 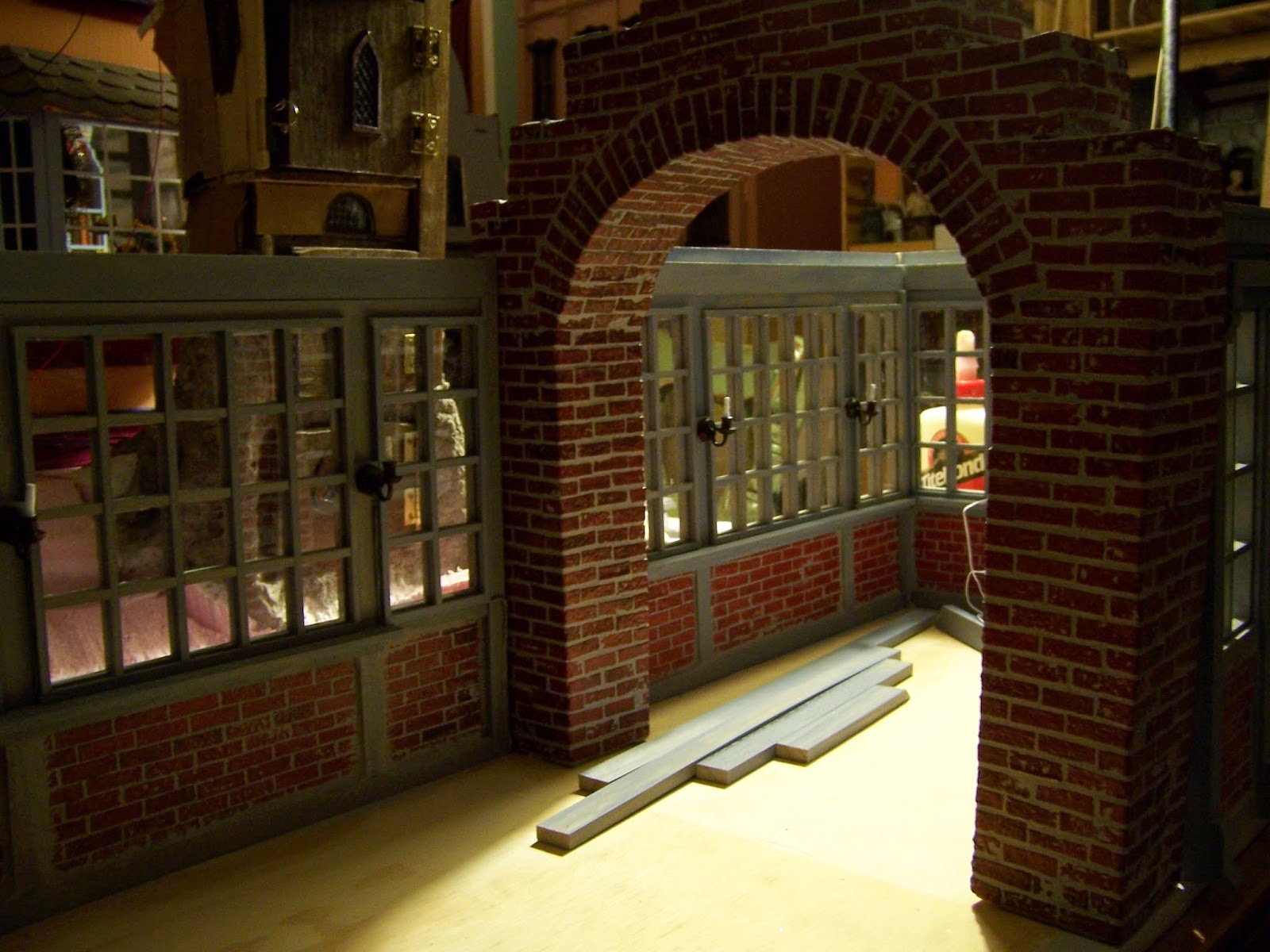 But for now, at least the back wall is glued down
and will no longer fall over at every touch!

And another Tiny bit of progress has been made with the hall of the Willowcrest.
I decided to try the "lead" line paint that you use for glass painting
on the plastic window in the stairs. 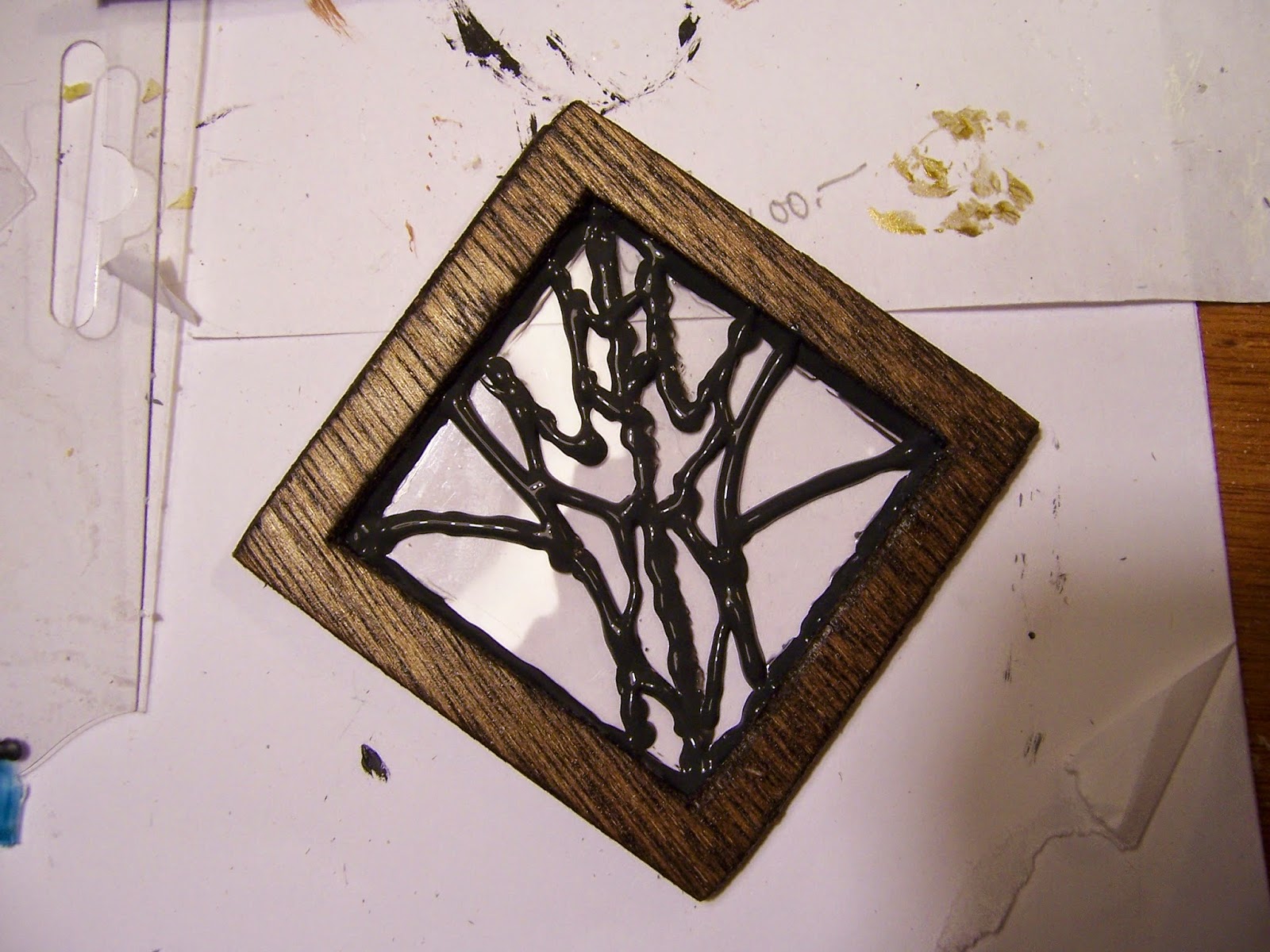 I had bough a larger bottle of the stuff,
but it comes with a pre-cut tip, which makes a wider line than I was expecting.
It makes the drawing look very crude.
And because this is on a plastic sheet, I can't bake it to cure it.
But I decided that it will be on the interior of a window you can't reach,
so it will be protected from wear and tear.
Rather than use the glass paints which require baking....
I decided to try nail polish....
It comes in such yummy colors these days! 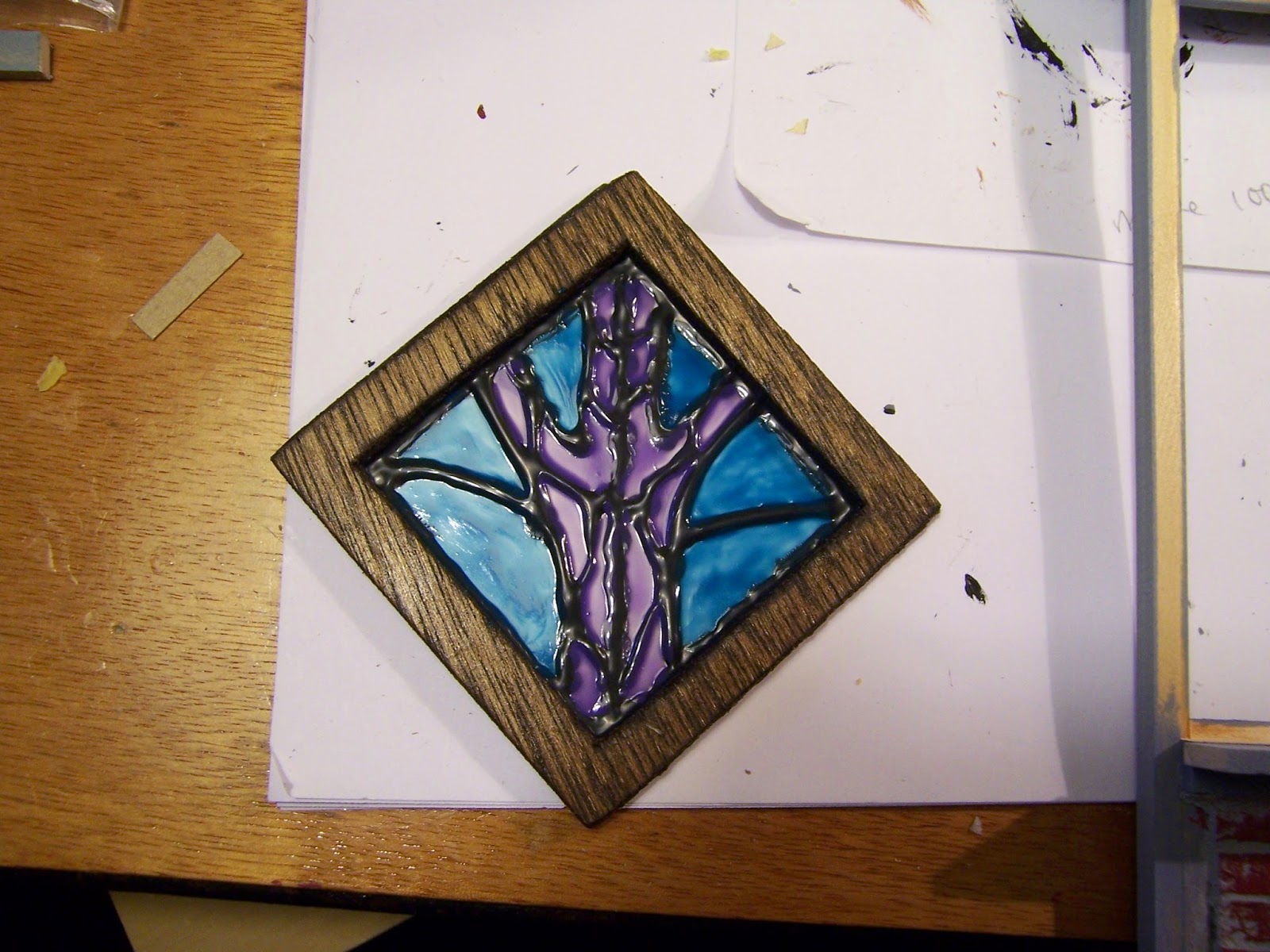 You may remember that I wanted it to look like a continuation
of the painted tree in the wall mural... 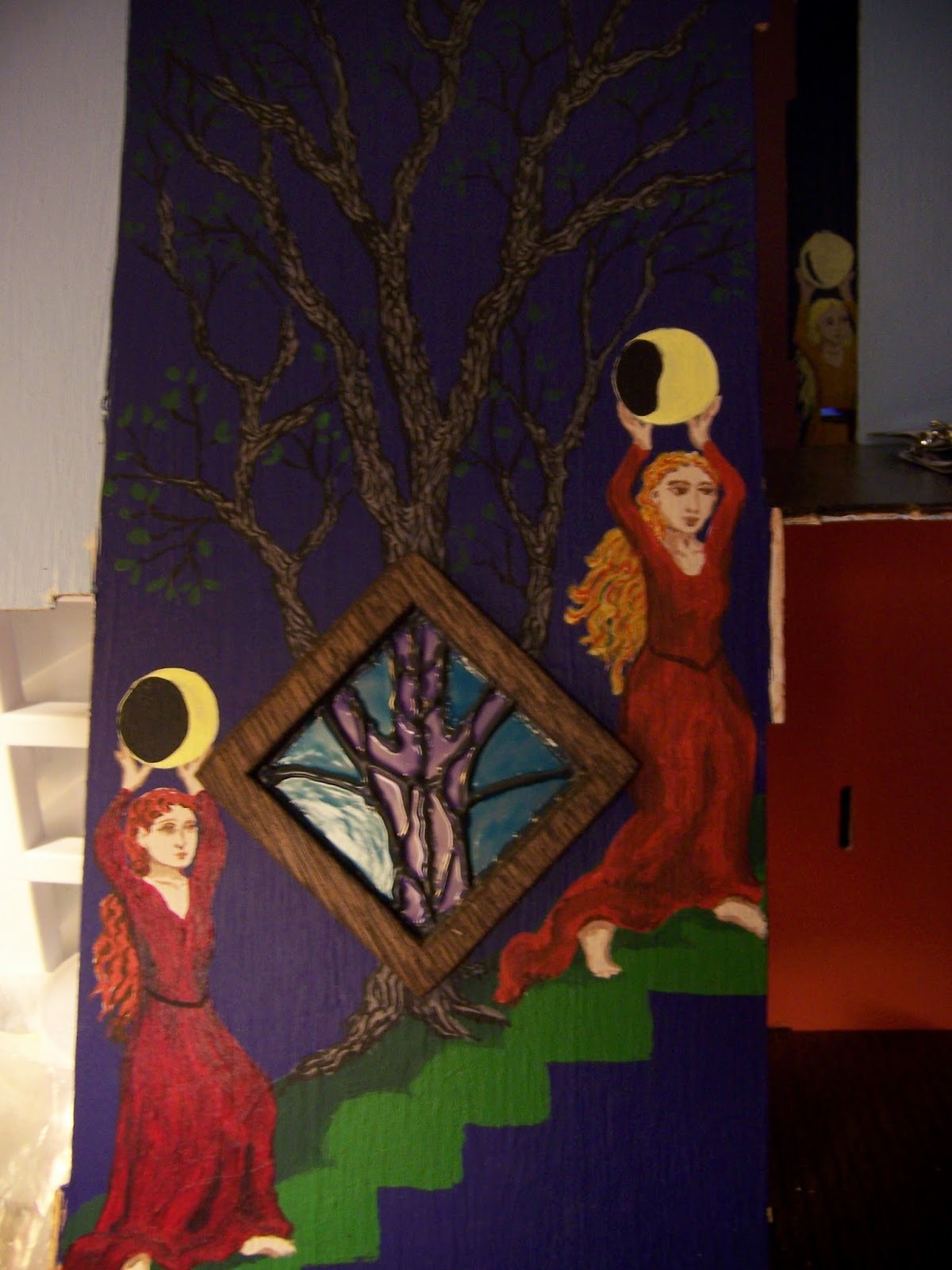 Of course, it is now the Dark time of year...
It is so difficult to get pictures with the lighting right.... 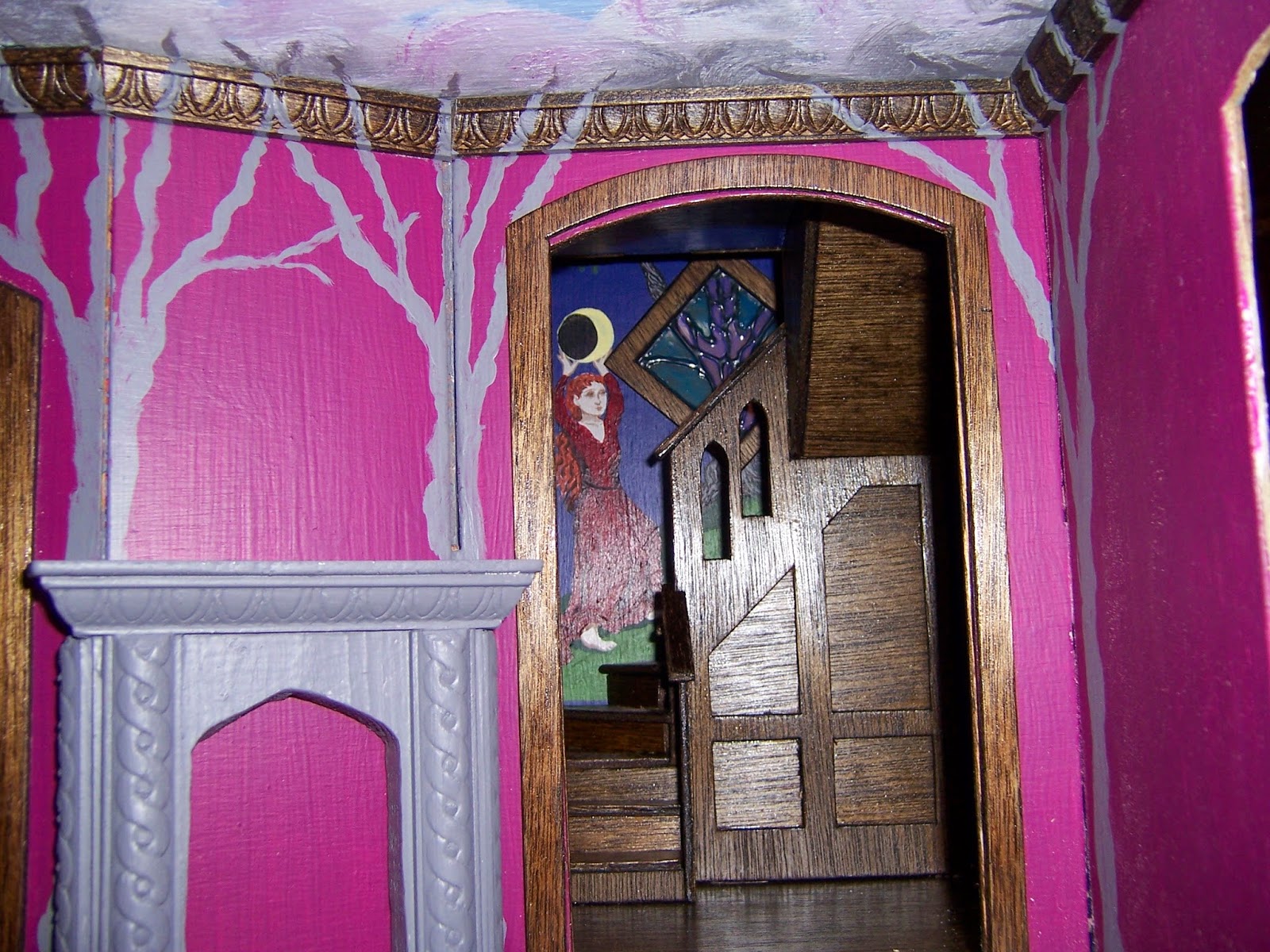 Here you can see it in the view from the parlor with the flash!
(And the fireplace now has a coat of paint too...)

And while I was being bold and trying this method,
I decided to use it on the front doors too! 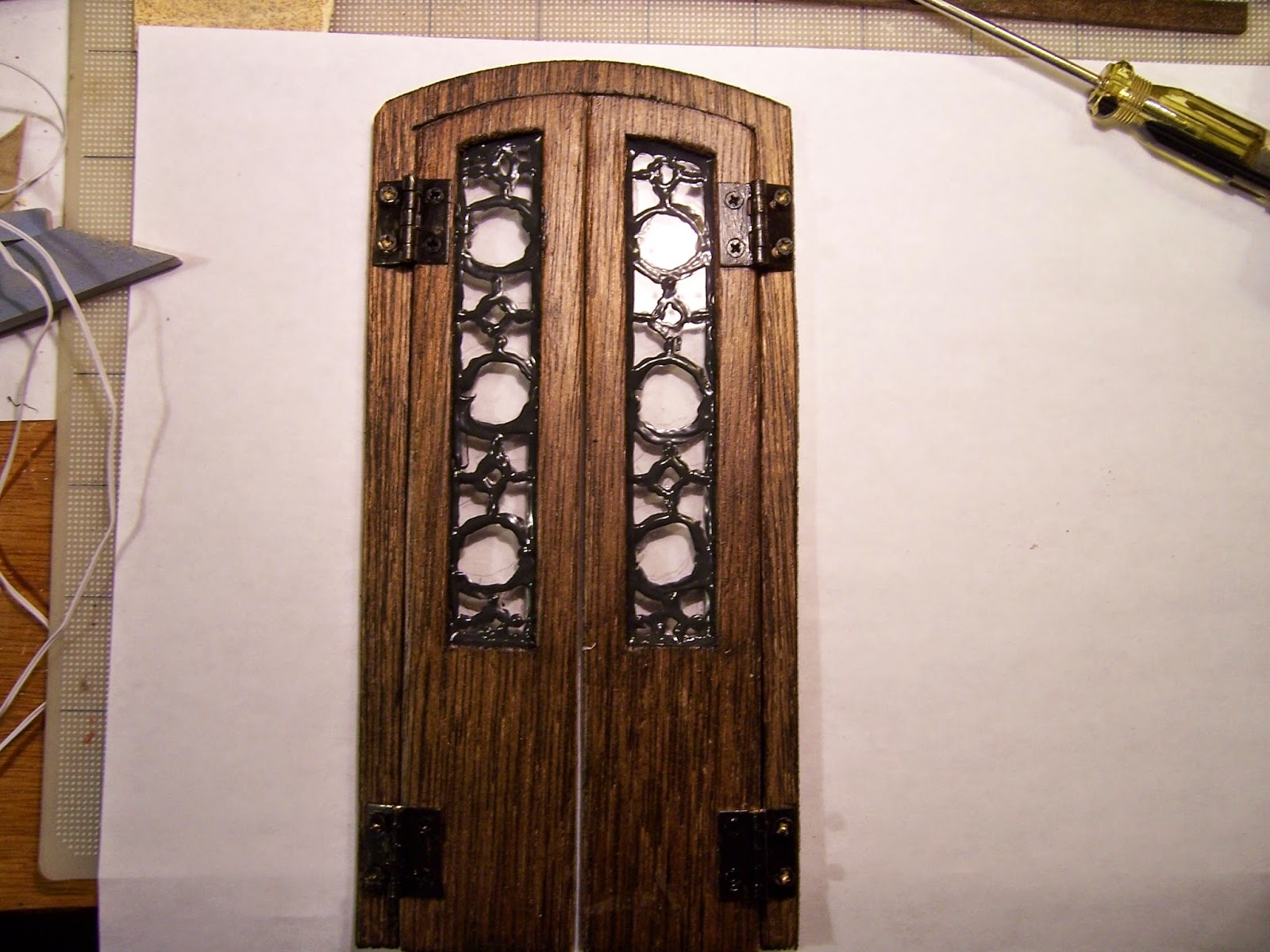 Once again, the line is much thicker than I would have liked..... 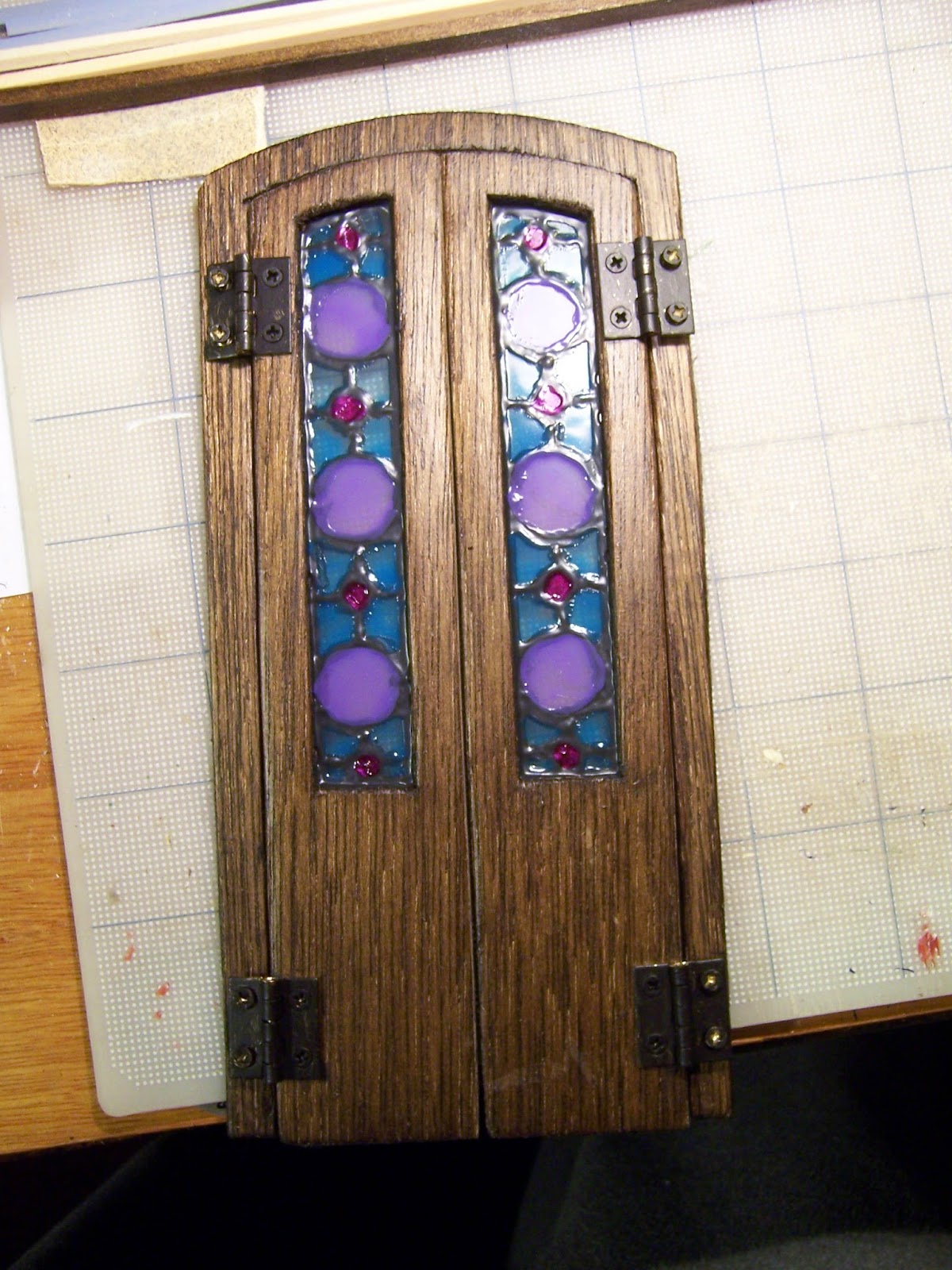 But I think the colors look wonderful! 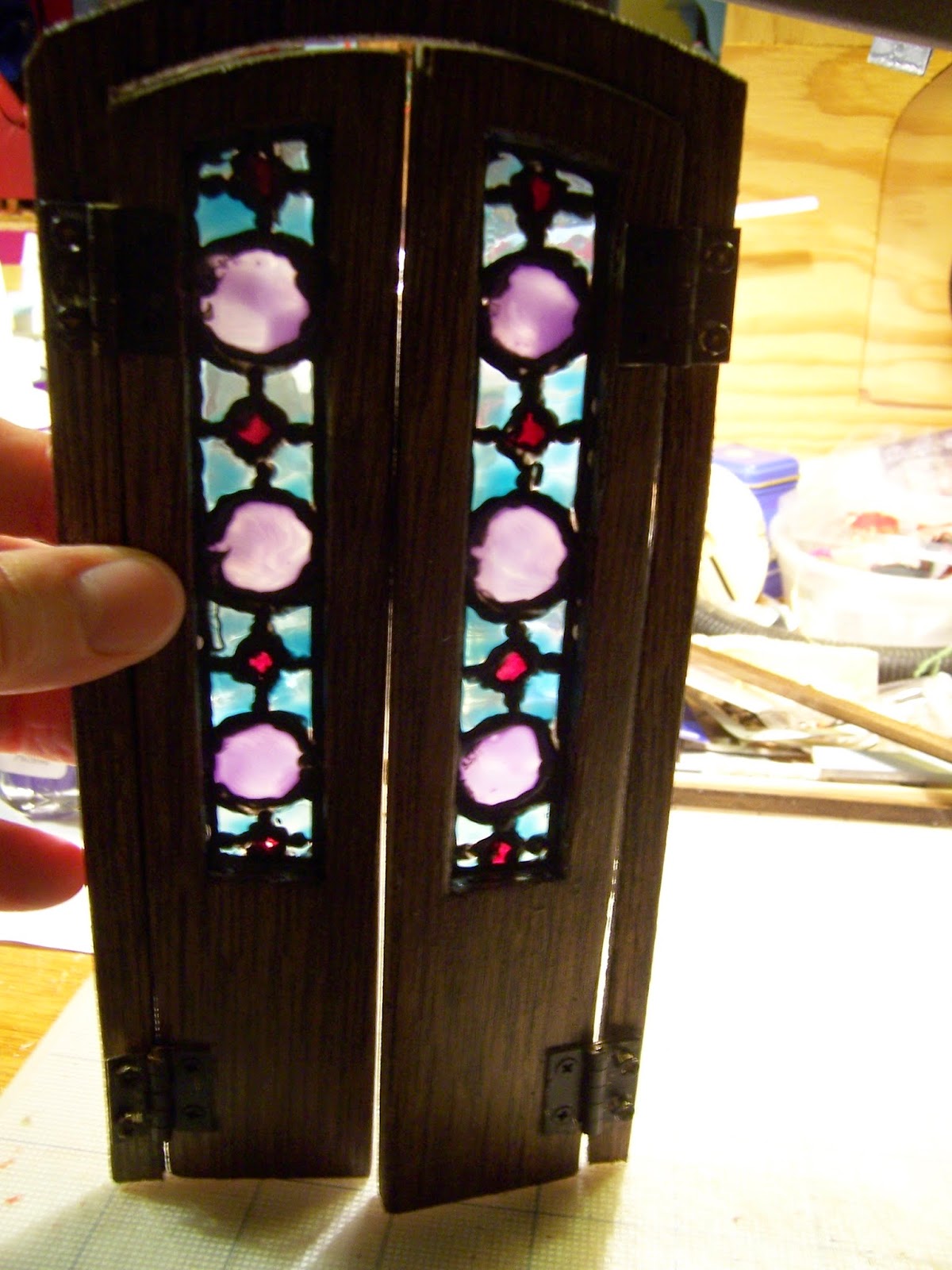 And if you hold it so the light can shine through....
(Please overlook the crude, rough leading!) 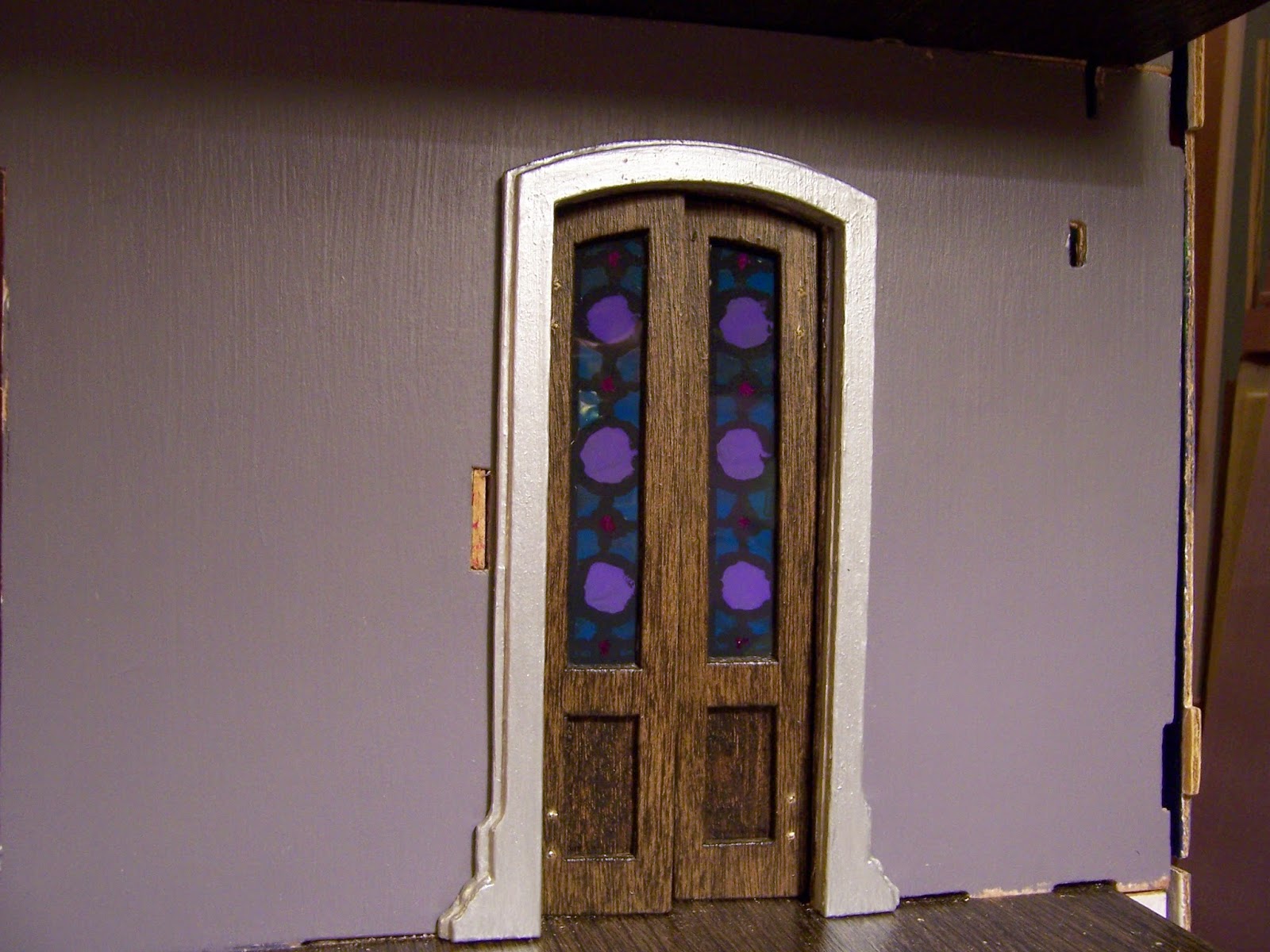 And here they are propped in place on the front of the house.
I will need to attach them with the screws from the inside....
so I am not completing this until all the hardware is in place!
Yes, this front hall requires you to think everything through....
because when it is enclosed it will be impossible to reach in there!

And that is not the only place Dear Readers,
where you will think there has been no progress at all!
I am sure you will have despaired of ever hearing more of Daphne's Story!
You might recall that we last saw her when
she told Will she could not love him as he deserved.
And you might remember that she had been on her way
to the DeMontaigne family Town House
when she passed the Park and chanced to see her child at the Fountain.
And then she had confronted Will. 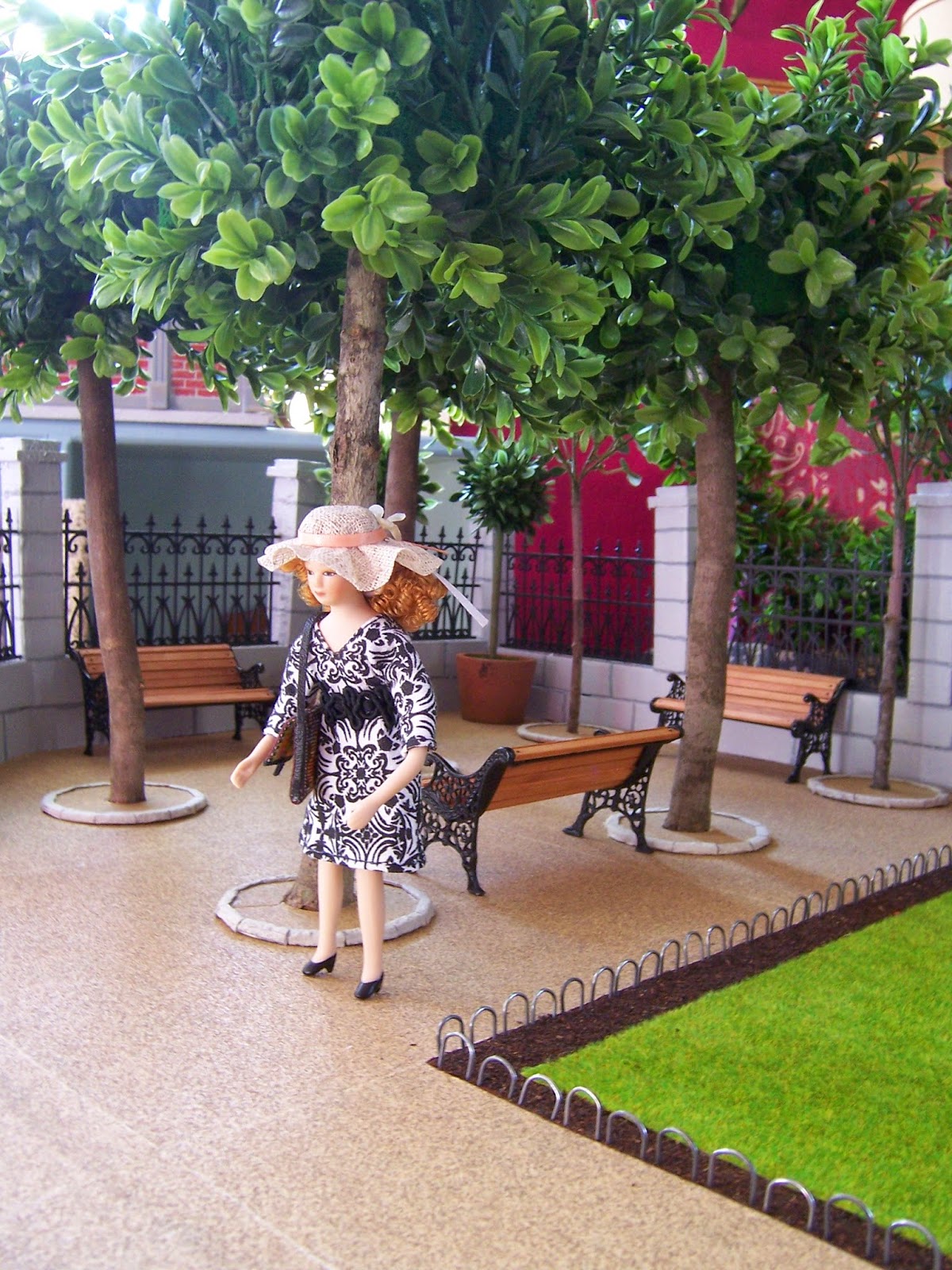 When she left Will in the Park, she realized she was too upset
to continue on her way the the deMontaigne House. 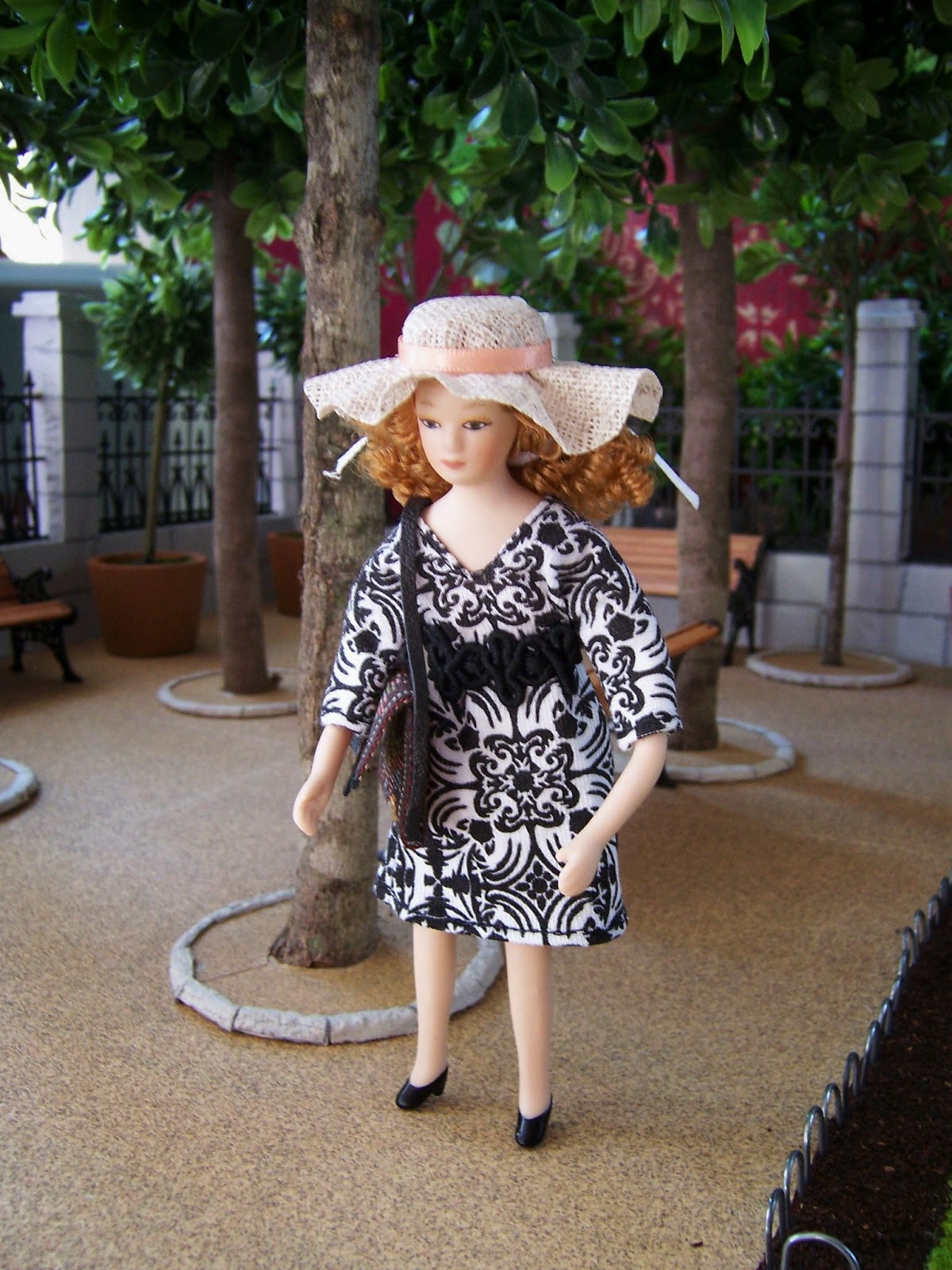 She realized that too much had happened that she hadn't planned on
for her to continue with her first plan.
She needed time to think things through.
She hadn't thought Will would be here asking questions....
meeting her child....!
She had no idea what the repercussions of that might be!
So she returned instead to her Pension and sat with her tea in the garden. 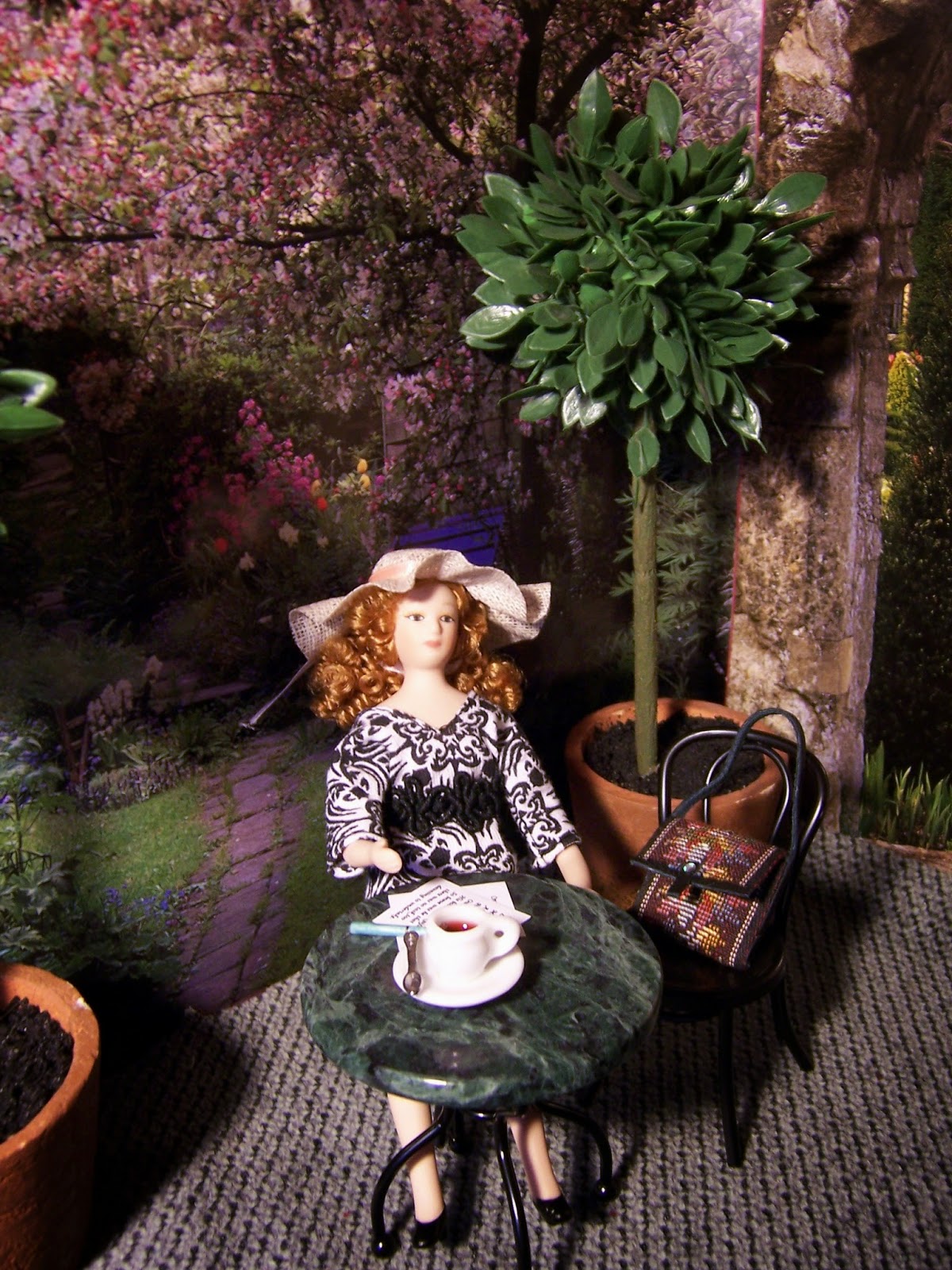 She needed to think things through and come up with a plan.
And the more she thought about it, the more she realized that she didn't want to alarm the deMontaignes at all! She wanted to be able to get along with them..... 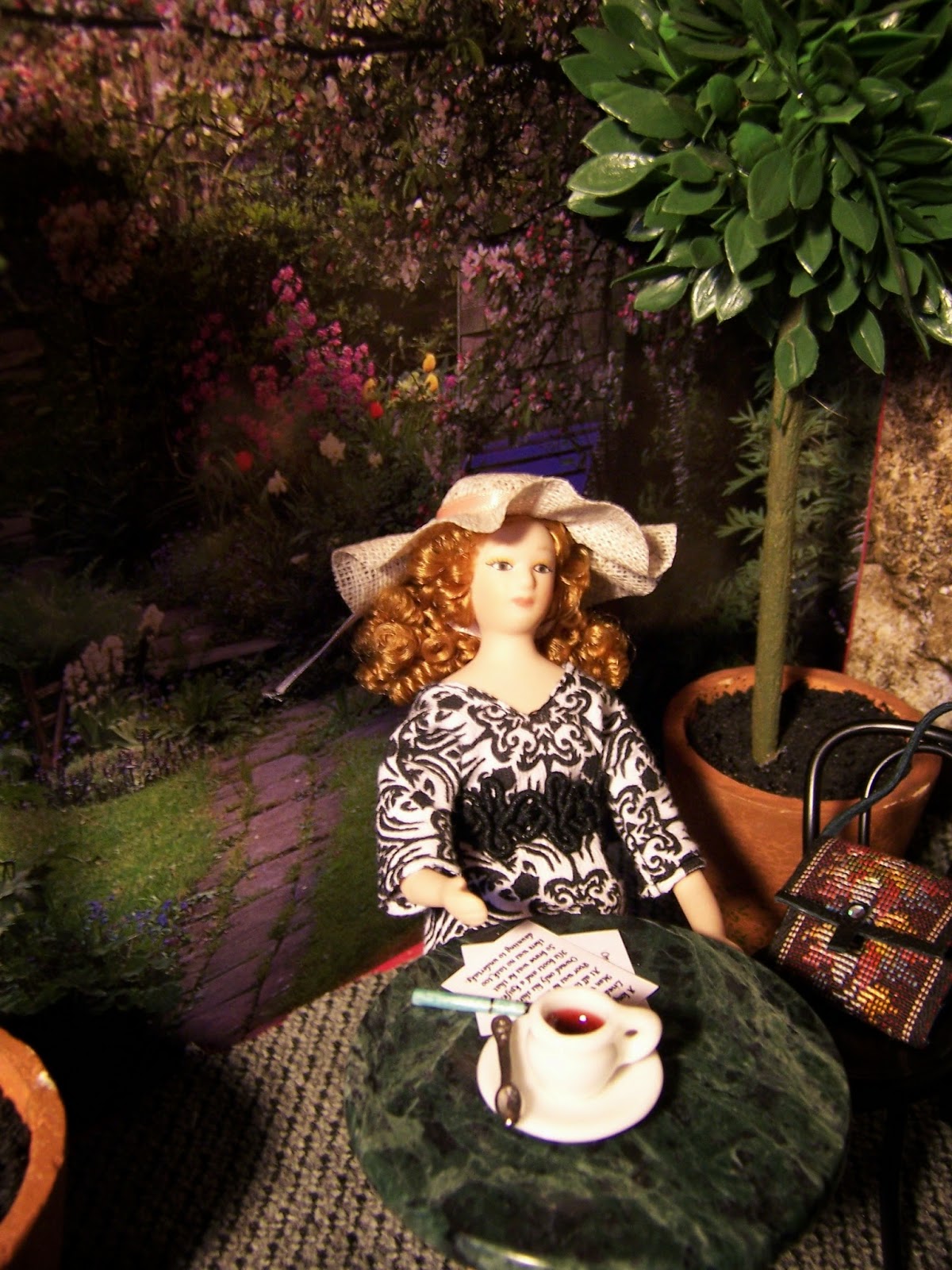 She wanted them to know how she felt and what she hoped for.
She decided the best thing would be to write them a letter.....
that way she could say all the things she might not otherwise tell them....
about her desire to be a part of her child's life. 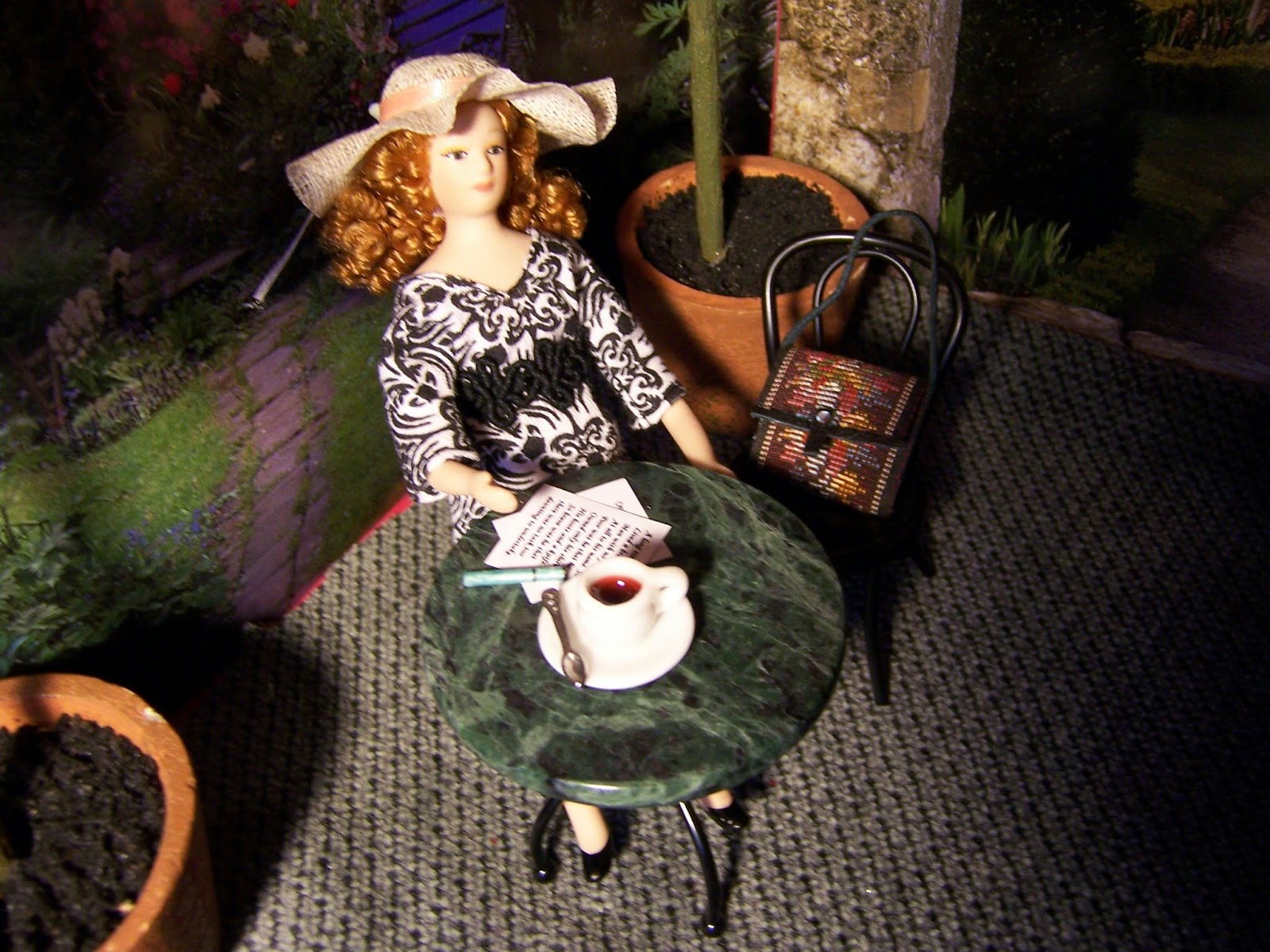 Yes, she would write them a letter telling them exactly what she would do.
And she would give them a week to think about it....
And then she would go see them as she had at first planned.
She didn't want them to be alarmed when they saw her after all these years!

Well, Dear Readers, it might seem as though nothing has been done at all.
But if you look closely, I think you will see there has been some
Slow Progress after all!
Posted by Daydreamer at 9:47 PM