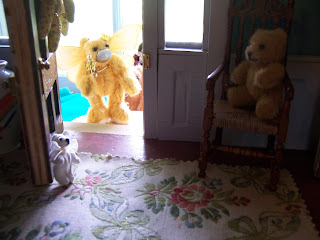 With all the recent comings and goings in my RL World, Dear Readers, my Time has been too Fragmented to accomplish much in my Mini Worlds, and what little has been done is all rather scattered and only partly done with little to show for results. So I am sure you will not be too surprised that all I can show you this week is another small part of the Adventures of Marmalade and Buttercup as they try to find the Cloud Palace! You might recall that they had joined up with Tiny Bear and the Little Dreamers, and the last we saw of them they had just arrived on the doorstep of The Lovely Old Dollhouse. Tiny Bear was really rather relieved to find a house he had been to before and he marched boldly in the door. There he saw Theodore Bear still sitting in the chair by the front door.

"Good afternoon" he said politely.
"Oh, its you again..." said Theodore Bear.
"I've brought my friends...." said Tiny Bear.
"We're looking for the Cloud Palace...." he added.
"You don't happen to know which way we should go...?' he added hesitantly. 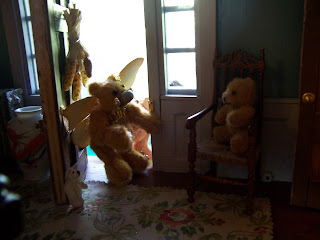 At that moment Buttercup stepped inside too.
"Hello..." she said. "My name is Buttercup."
"Oh, hello..." said Theodore bear.
He was suddenly a bit shy to see such a Large Bear... with Wings!....
He had never seen such a creature before! 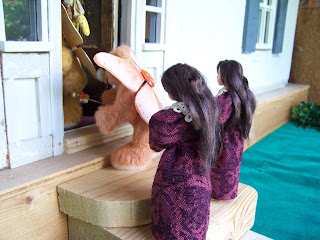 And right behind Buttercup... came Marmalade...... 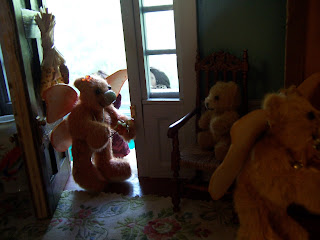 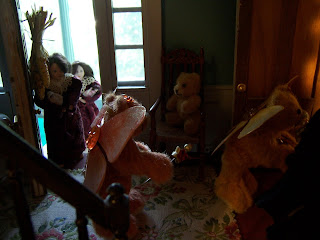 And right behind Marmalade came the Little Dreamers. 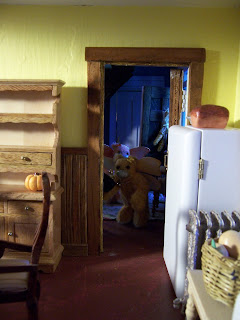 By then Buttercup was on her way to the Kitchen.... 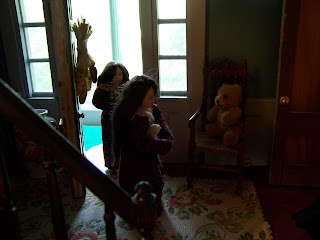 "Hello..." said Amy as she passed by Theodore Bear
on her way to the Kitchen.
She was feeling a little bit hungry by now
and thought a snack would be very nice!
"Hrrrumph..." said Theodore Bear again.
"I didn't expect a whole darn Parade...!" he added under his breath. 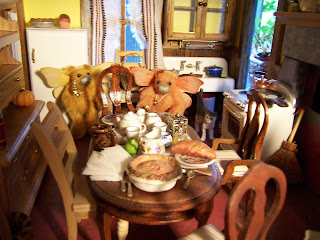 The instant Marmalade entered the kitchen,
she spotted the teapot!
(She was very fond of tea!) 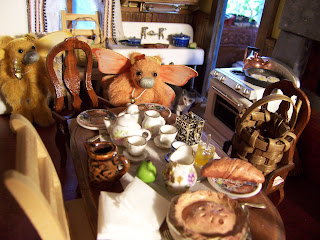 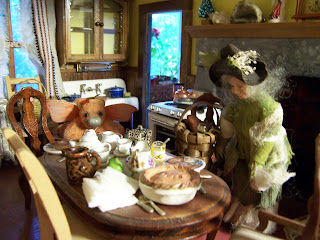 "Well..." said Hazel "Let me fix a basket you can take with you."
(Marmalade had completely forgotten about finding The Cloud Palace!)
But Buttercup had decided to have a look around The Lovely Old dollhouse...
just to see what she could see! 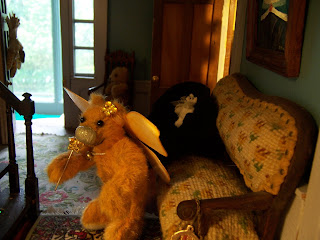 She headed up the stairs.... 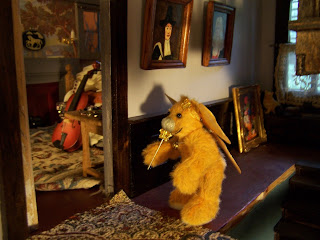 And peeked in the door of a bedroom at the top of the stairs.
No-one was there, so she went on to the next room. 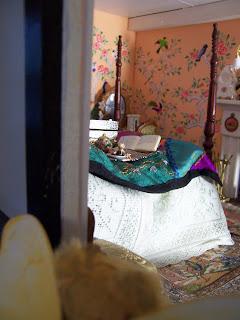 She peeked in the door.
It was the most beautiful room she had ever seen!
So she went in to explore...
Meanwhile, Marmalade realized that Buttercup was gone,
and went looking for her. 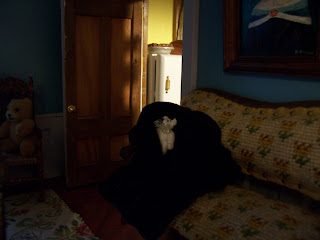 Tiny Bear had hidden himself inside a coat on the settee in the hall.
"What are you doing there. Tiny Bear?" she asked. 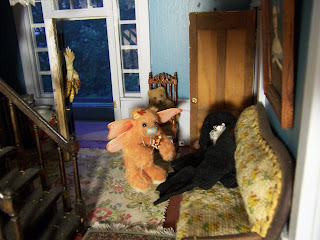 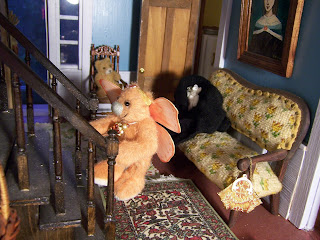 "Let me find Buttercup.... then we can be on our way..."
she added as she climbed the stairs.
At the top of the stairs she could hear Buttercup
talking to someone at the end of the hallway... 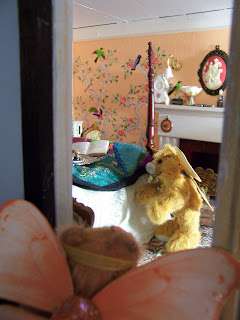 She went to investigate. 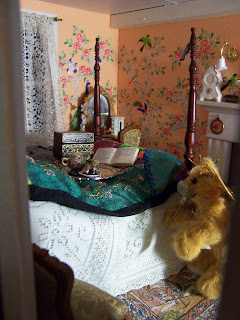 Who could she be talking to? wondered Marmalade....
There didn't seem to be anyone there! 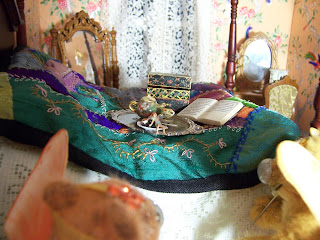 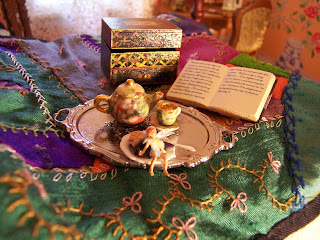 Practically sitting In a piece of Blueberry pie.....
was a mischievous Little Fairy!
"The Cloud Palace...?" he was saying....
"You'll never get to the Cloud Palace!"
"Not unless you talk to the Wizard
about the Key To Time!" he added and laughed in a rather sly way! 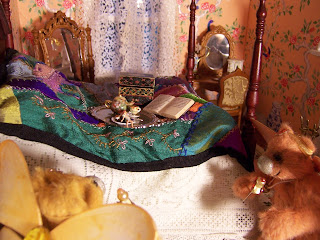 Marmalade looked at Buttercup
and they silently agreed that it was a good idea
to go find the Little Dreamers and continue on their way! 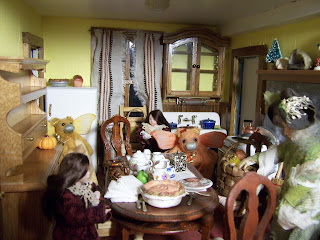 Marmalade wanted to be sure that the
jar of marmalade was also included in the picnic basket! 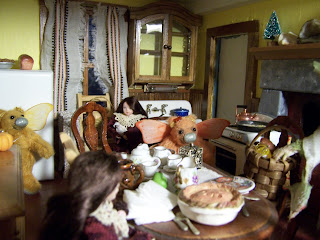 And so they gathered up their basket
and All together they headed outside to
continue their search for the way to The Cloud Palace! 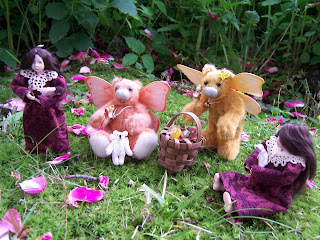 They were just about to start on their picnic, Dear Readers,
when they noticed something in the distance! 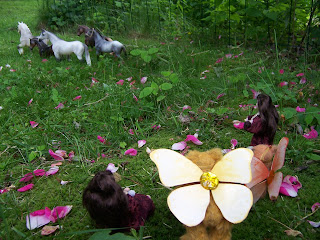 Whose horses were those?
And where were they going?
Well, Dear Readers,
I hope you can forgive me for leaving you here....
Time is so Fragmented lately....
We can't even finish the Fairy Tales in one sitting!
(To be continued!)