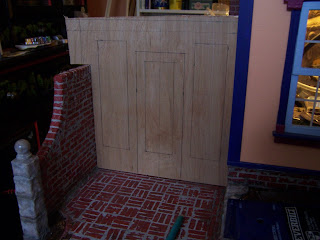 I must Confess, Dear Readers, that it was only After I had started to work on (*cough-cough*....) Another Project that was needing me to cut plywood walls and doors, that I realized the simplest method of building the Glass House would be to cut the openings for the door and windows from a piece of plywood, rather than trying to construct the walls from pieces of "lumber" like a real life building! I had been pondering the various steps needed to construct the door and the windows and fit them into the uneven brick wall area, and was making no progress! The ready made commercial windows and doors were not the right sizes to be of use here. And three of the four corners were partly supported by the brick wall, which was not the full height of the sides for the Glass House, so they would need to be fit on top of the brick walls.... and so figuring out where to start was just making me go in circles! Then I realized that I could start with the plywood "wall" and cut the openings for the door and windows! So simple!! And I had just the pieces of plywood right at hand! This Glass House is really quite small, being just under seven inches wide and seven inches deep. So I started right in with the front wall where the door would open onto the "courtyard". 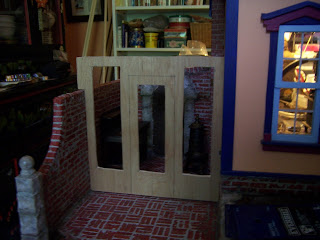 The windows will probably be made of real glass
with additional "framing" to hold them into the openings. 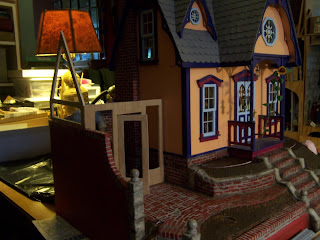 And then I started on the end wall which rests atop the brick wall. 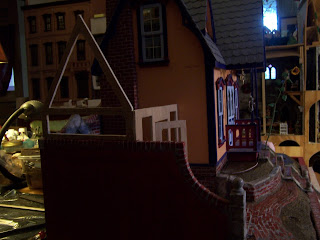 (I apologize for the dark pictures.. I hate to use flash,
and the light is not strong in this room!) 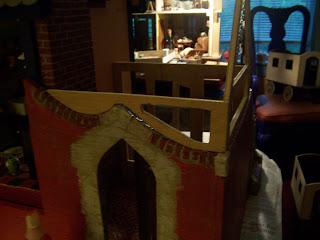 And then started to fit the challenging back wall ....
which needs to match the sweep of the wall on one side
and establish the level base for the rafters above! 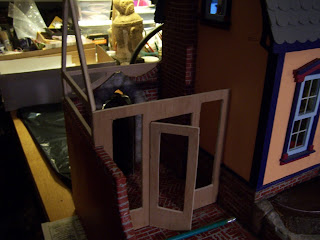 The fourth wall will be The Folly wall.
And the back side of the roof will hinge open for access to the room. 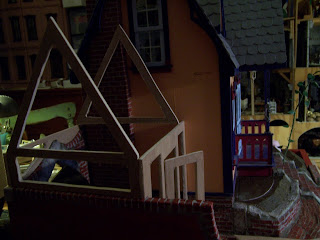 I cut the other rafter frames, but still have to notch them
into the top of the wall and add the support under their ends. 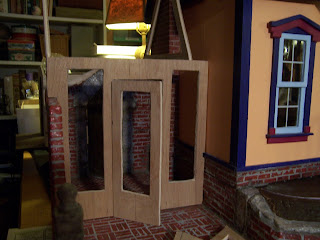 It went together much faster than I thought it would!
(Although none of the walls are yet attached....
they fall down at the drop of a pin!) 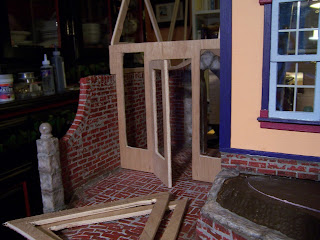 It makes the "courtyard" feel very small and intimate....
but really, all the rooms in The Folly are rather small! 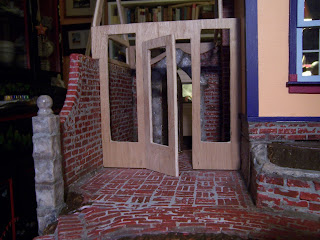 But I didn't have time to figure out the hinges for the door...
The Folly is one of those thin plywood kits
which don't support the use of metal hinges with screws...
so I used leather ones on the front door....
which is the only door in the whole house!
The plywood I have used for the Glass House is thicker
and would take metal hinges with no trouble.

Meanwhile, Dear Readers, rather than leave you with so little to look at,
I will share with you some pictures my sister sent recently
Featuring a Fairy Bear adventure (of a small sort!) 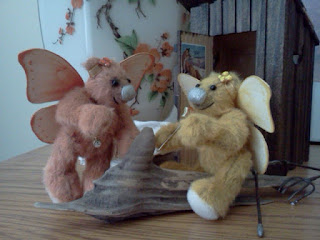 Marmalade and Buttercup were playing together
one sunny afternoon at Hope Cottage.
Suddenly one of them said, "We're sisters,
but which one of us is the older one?"
"I don't know," said the other one. 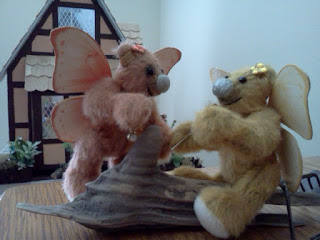 And then Marmalade said "Hey, our wings can come off....
let's trade wings and see if they feel different!" 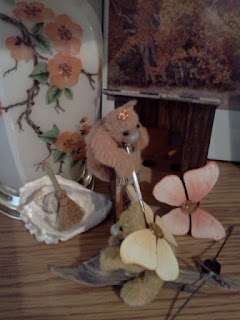 And she had removed her wings in no time at all!
But Buttercup's wings would not come off!
"Here, I'll help you" said Marmalade,
wielding a long sharp looking tool. 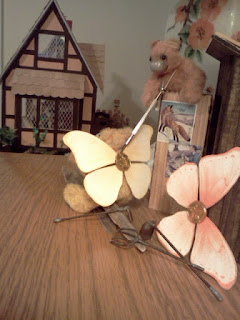 But buttercup had complete faith in her sister,
so she sat quietly while Marmalade climbed onto the outhouse door
in order to get better leverage! 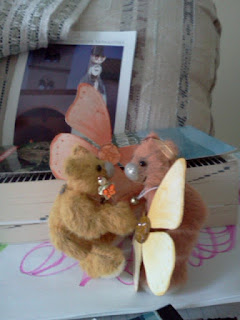 Soon they both had taken off their wings and they traded,
Golden for Orange.....
It made them feel a little giddy and full of Adventure! 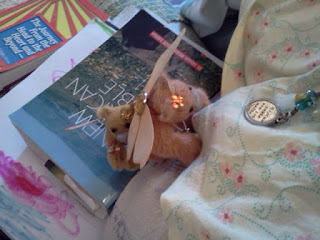 Next they decided to climb to the top of Sleeping Couch Mountain
to see if the world looked any different.....
(And of course, they could have Flown up...
but it seemed more Adventuresome to help each other climb to the summit!) 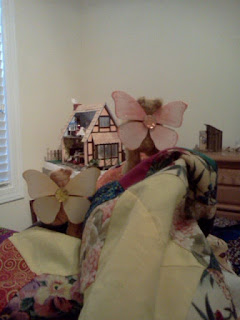 They made it to the top at last,
and they could just see Hope Cottage in the distance! 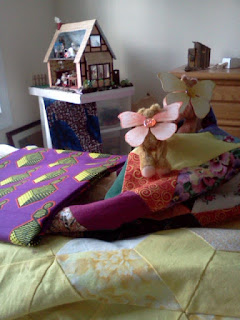 It seemed so small and far away! 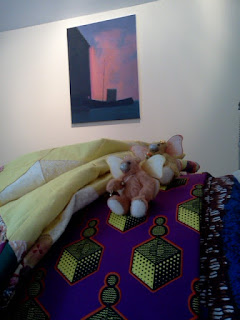 Then Marmalade said "Look!"
"We could slide down the Mountain on this beautiful cloth slide!" 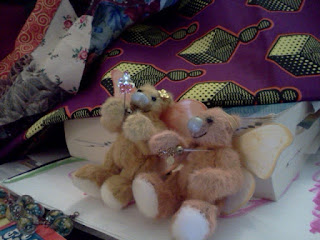 And so they did!
Squealing all the way down!
And when they reached the bottom, Buttercup said "what next?"
And Marmalade said "I'm hungry" 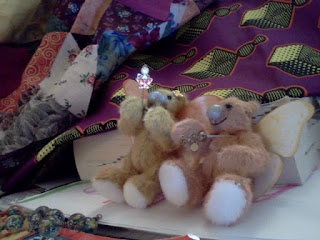 And Buttercup held up her magic wand and recited a quick magical spell......
(The words of which I couldn't hear clearly and have since forgotten!)
Her wand glowed brilliantly.... 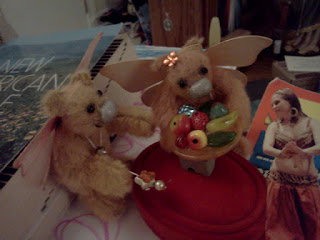 And suddenly a platter of beautiful fresh fruit appeared,
brought by a lovely house genie!
Marmalade gave a big sigh! Being sisters was so much fun!
And it probably didn't matter at all which one was older,
or who wore which wings....
It only mattered that there Was a sister there to share with!

This story was lovingly sent by my sister, Dear Readers,
to share with all you in blogland
who might have wondered how Marmalade and Buttercup
were faring in the South!
Meanwhile, the Glass House is well under way,
and I didn't have to do any "framing" at all!

Posted by Daydreamer at 9:58 PM