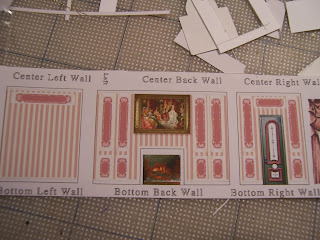 No Matter how much work you put into it, Dear Readers, the progress on this Secret Christmas House kit is always Tiny! Even though the final room needing its interior walls decorated is the Largest and fanciest room in the House, it needed only the same treatments as the others. I started by making the gold picture frame to add to the printed wallpaper version. This time I made it from two layers of card, one cut slightly narrower than the other, and glued them together. 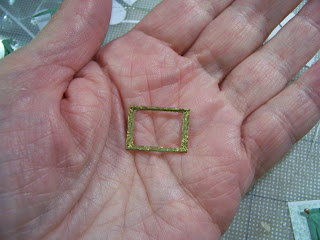 Here you can see it once it was painted with the gold paint....
which I applied in a textured manner to suggest the carving on the frame.
It is by far the largest and most elaborate frame in the house. 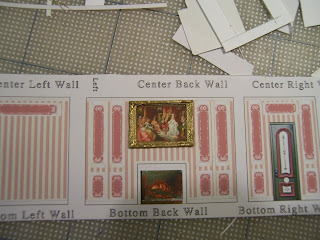 Here you can see I have glued the frame to the printed wallpaper. 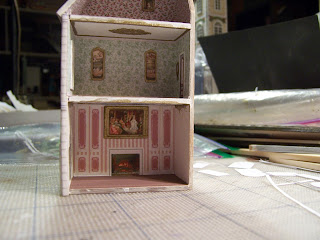 And here the paper has been attached to the back wall of the Parlor. 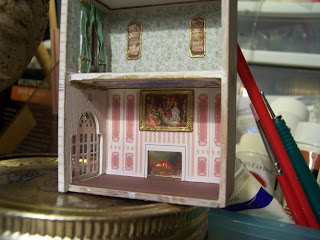 Here you can see the ornate window in the Parlor
before the wallpaper has been fitted.

The kit comes with interior window frames
which are supposed to be glued to the wallpaper
before it is attached to the wall...
but I found that was going to mean
I could not adjust the placement of the frame
over the opening of the window
because the paper needs to fit the wall precisely.
So I fitted the paper to the wall first
and then tested the window frame..... 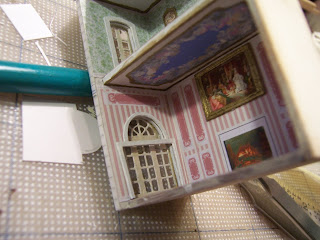 And then I noticed that the interior frame
was not exactly the right shape
to match the exterior window frame!
The center cross bar was going to be too low
and would interfere with the view in the window from outside!
So I removed the center portion of the frame.... 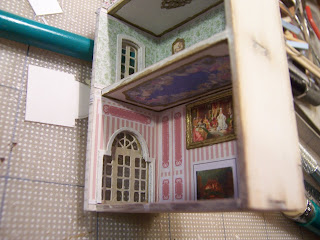 Which you can see here. 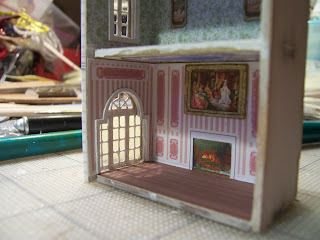 And here it is glued in place. 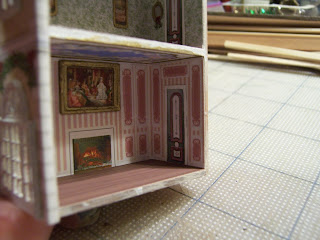 And the door needed a frame around it like the ones in the other rooms.
At this point I had to postpone making the baseboard trims
because there will need to be a fireplace mantelpiece
to surround that beautiful glowing fire
and until it is built I will not know where to end the baseboards.
The fireplace surround comes in a separate batch of kits.... 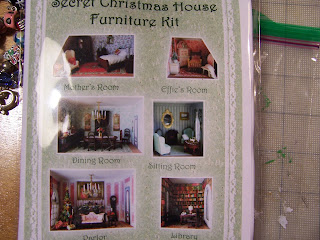 Yes, there is an entire houseful of teeny tiny kits
for all the furniture and decorations shown in these pictures!
But meanwhile, Dear Readers,
I was also trying to make some tiny curtains.... 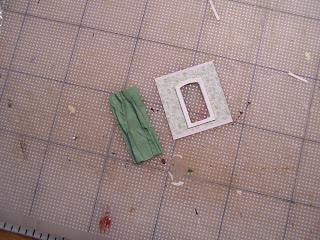 From coffee filter paper painted with acrylic paint
and "wrinkled" to shape as it was drying.
The idea is to let the acrylic paint
act like the "glue" used in other methods. 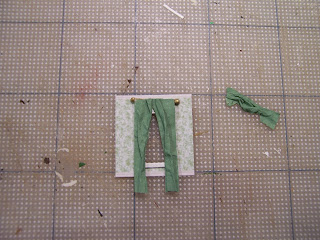 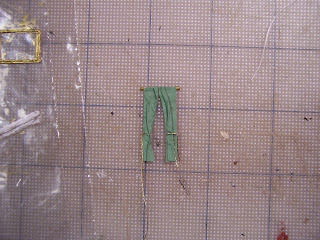 Or at least some gold rope tie-backs.... 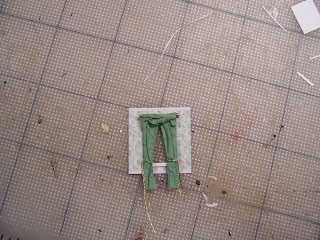 But I am beginning to think I have to be
more precise with the drapery folds..... 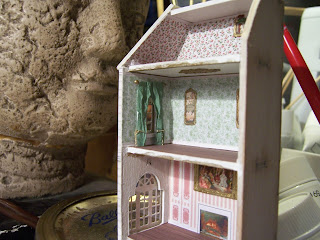 Because when I test them in the room...
they just look messy!
Yes, I will need to refine the drapery a bit!

And that is not all I accomplished Dear Readers,
I also made Tiny progress on the exterior of the house!
I really want to "finish" the exterior
before starting on all those dozens of interior furniture kits....
if for no other reason than that I would hate to lose
any of the final outer pieces before I got them attached! 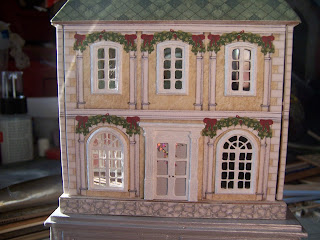 The House is designed to sit attached to its own perfectly lovely table....
which I am painting a glossy silver gray.
But then I started thinking that maybe I shouldn't attach it to the table....
because what if somebody wanted to Play with it?
What if there needed to be a garden...?
or a beautiful Landscape....?
Perhaps it should be able to sit on a larger table
where the sides could sometimes be open ....? 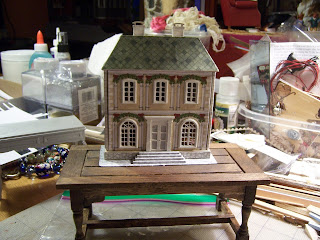 So I painted a piece of cardboard to be a separate base..... 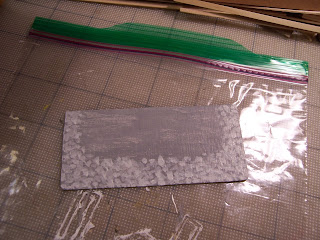 Making it look a little like the rocks on the foundation.... 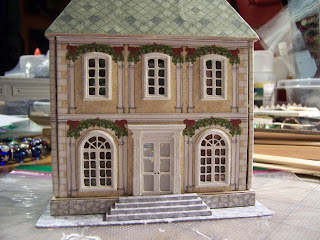 And then I glued it and the (painted) steps to the House! 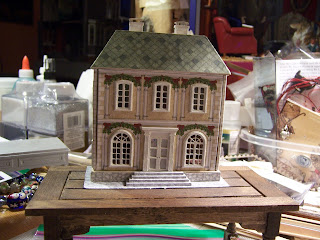 I think this allows for much more versatility!
And it can still sit perfectly on its own graceful table! 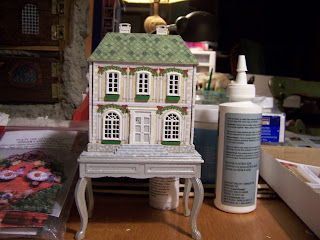 You can also see here that I have
painted and attached the tiny window boxes. 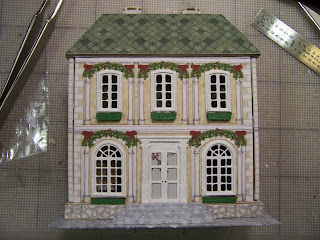 The kit suggests that they be painted red,
but I wanted to downplay the red on the exterior
so I painted them green.... a much more traditional color!
There is a supply of green and red "bunka" included
in this kit to make the greenery three dimensional.
I have yet to try bunka....
so I am looking forward to learning how to work with it!
The exterior of the house still needs the "icicles" added
along with the fake snow and "bunka" greenery....
and suddenly I am getting "Cold feet"
about making this permanently a winter scene!
Really!
I am just going to have to accept it....
It is the Secret Christmas House Kit after all! 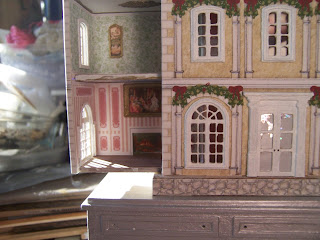 And even if I decide to add a Garden....
it could be a beautiful Snowy garden scene!
So you can see Dear Readers,
That a lot of Teeny tiny steps were accomplished,
Inside and Out....
And there is only a little more to do
to finish this Tiny Christmas House Kit!
(If we don't mention all those furniture kits, that is!)

Posted by Daydreamer at 8:58 PM