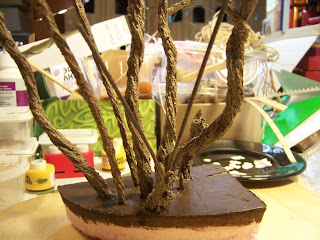 While my Lovely Mother was visiting, Dear Readers, and I was adding to the tally of Lilac Blossoms, I was reminded suddenly that the Final Lilac Shrub (did you even remember that there was one still to complete?) was lagging way behind in the completion of all its myriad details. I had thought it would be just a matter of adding all the leaves necessary for a Summer Lilac Shrub. But when I looked at the stems I realized I had not even added the careful ink lines that made such a difference in the appearance of the bark texture! So, on a gloomy rainy day while my Mother was knitting and I was gluing florets to yet another Blossom, I also began to draw all those tiny lines on the stems. Above you can see the completed results... because I forgot to take a "before" picture! 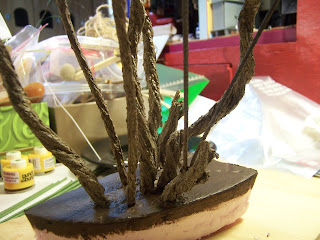 I am not sure if you can see them here....
(It was a gloomy day and the lighting is harsh...)
But there they have been added! 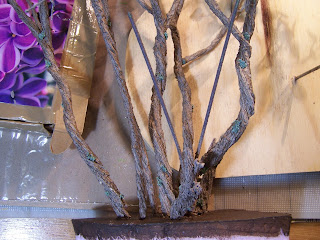 And then I had to add all those lichens....
In likely spots... but trying to copy the bushes that are already done....
In case anyone wanted to point out how I missed
a spot that had a lichen on the other version!

I am going to wait to add the fungus until
I am closer to finishing those leaves...
because the fungus are delicate
and there are a lot of steps involved with the leaves!
But before I get to the leaves, Dear Readers,
I must show you the nest! 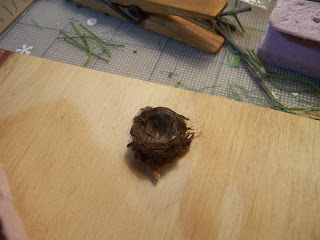 I hope you will recall that there is a Robin's nest in the lilac branches!
And by now (or certainly by the time we reach full Summer...)
you must understand that the nestlings have fledged and flown....
Leaving behind a few downy feathers in the twigs!
Can you see them? 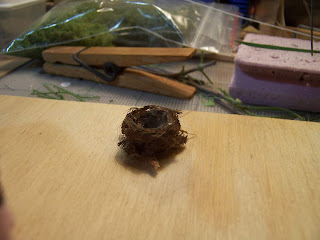 Right there on the edge of the nest?
(My winter down coat sheds tiny pieces of goose down
and they stick in my sweaters...
just begging to be used for minis!) 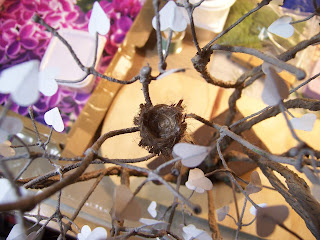 Here you can see where I have added the nest to the shrub.
(And I have also started to add leaves....) 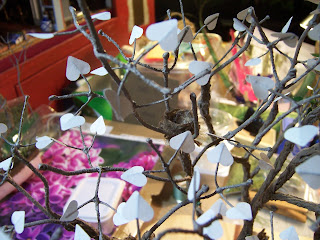 Another angle of the nest... perhaps you can spot the Feathers?
Well, even if you can't see them....
Yes, I will know they are there!

And as for those leaves, I must admit that they are going to take
MUCH longer to make than I had thought!
This is primarily because I had gotten a bit ahead of myself
way back last Summer with making four shrubs all exactly alike,
before I had figured out exactly how the blossoms
and leaves would need to be attached.
Remember how I was making all the branches with twigs on the stems?
(I will not mind if you don't remember!)
Well, I realized as I was starting the Blossoming version,
that the leaves would need to be attached to all those stems
before I attached all those stems to the branches!
So the Blossoming shrub was fairly easy to make and add leafy stems.
But the Summer Leafy shrub (now being constructed)
already had dozens and dozens of twigs on those stems...
and each twig would need a leaf added to it...
as well as more leafy twigs.... and then more leafy stems.
There was no way around it...
so I started to add leaves to those twigs... 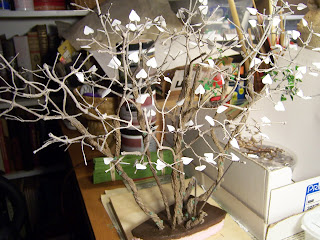 Here I have added leaves to about two thirds of the twigs. 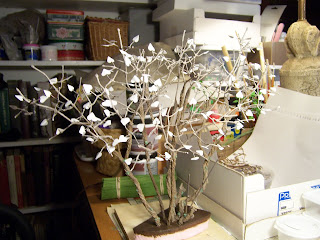 And all the twigs are now "leafed"....
but the branches have nowhere near enough leaves...
But before we add any more leaves.... these ones must be painted.
Because it is hard enough to reach through the branches
and not get green paint on the stems while they are spaced apart. 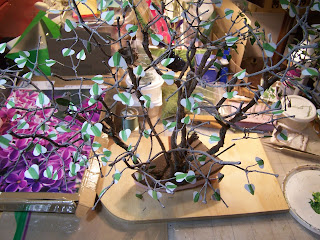 First I paint the paler green stripe down the top side of all the leaves.
Later this will be mostly covered with the darker green, leaving a thin stripe.
But next I realized I also should have painted the twigs green...
Because they are integral to the leaves... which are green. 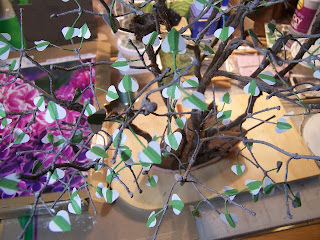 Maybe you can see the difference here?
Some of the twigs are green and some are still gray.
(When I have added the rest of the leaves on green twigs,
it will be apparent that they all needed to be green!) 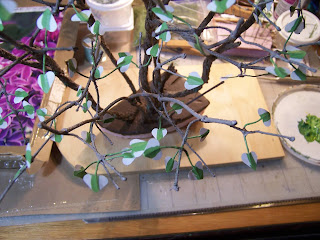 Here is a closer view...
I know, it is hard to see the difference.
Once that was done, I could paint
the undersides of the leaves the lighter green.... 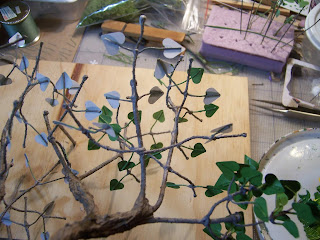 I had to hold the shrub upside-down,
and found it easiest to paint the farthest ones first. 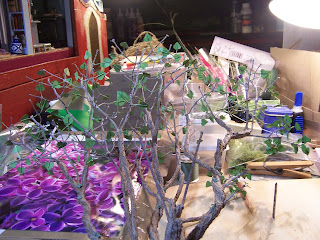 Here the undersides are all painted.
But that is as far as I got over the weekend.
I did not have time to get to the darker green
on the top sides of the leaves. 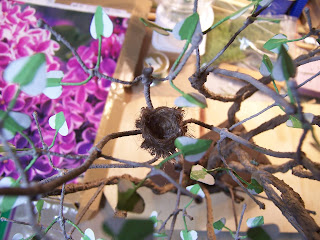 Another view of the feathered nest.....!

But I imagine, Dear Readers,
what you really want to see is the Weekly Blossom.... 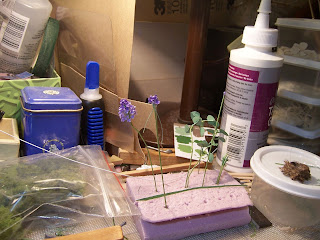 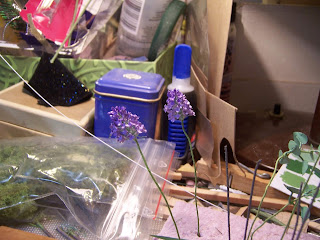 Yes, I completed two blossoms in a week again!
(I had extra time off from work with my Mother here!) 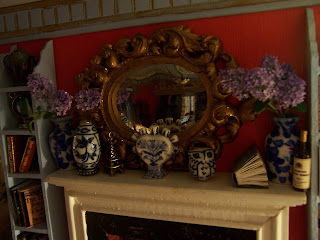 The first one is added to the vase on The Folly mantel... 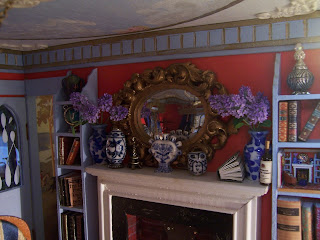 And the second one too! 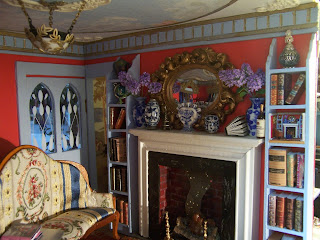 Can it be that I am nearly done with the Blossoms?

Well, Dear Readers, whether I like it or not,
I have not forgotten The Summer Lilac...
And I still have a Long way to go making leaves...
It might take me All Summer!

Posted by Daydreamer at 8:59 PM