Where Are We Going Now? 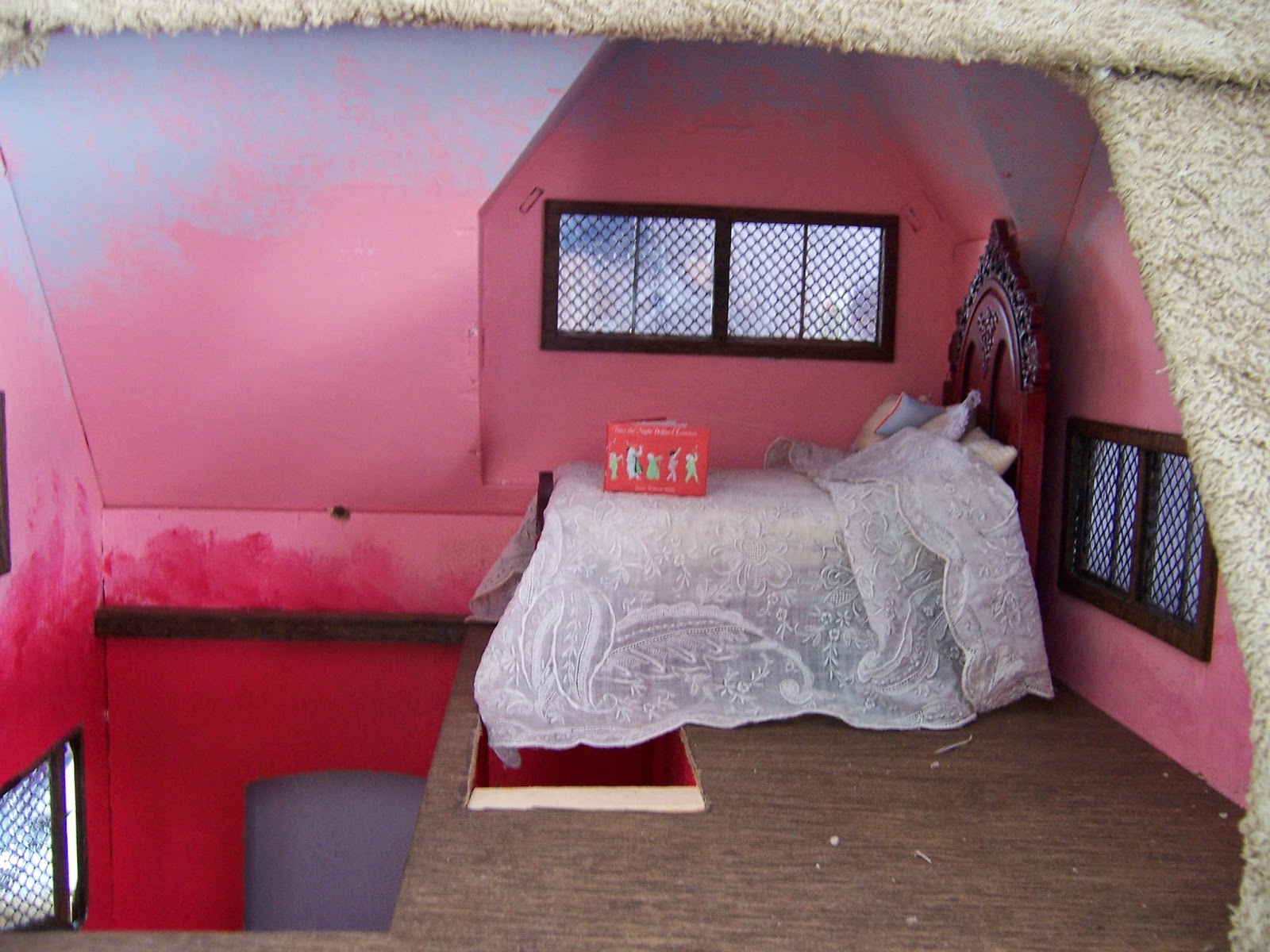 There have been a lot of changes in My World recently, Dear Readers, not the least of which is a new computer with a new operating system (which takes a lot of getting used to!) and a new photo storage system (which takes a lot of getting used to!)..... So I hope you can forgive me, as I Detour you through another one of my Ongoing projects.....! It is one that you have seen in some of my Stories, but never really been given a thorough look at! This is mostly because it is Woefully incomplete on the inside.... and I have been struggling with the layout of the parts ever since I started building it! This is the "Aster Cottage" kit, a small half-timbered thatched roof cottage... and I emphasize the "small"! The floor area is about 16'' by 19" and the second floor is supposed to be just a loft. I started this kit while Hurricane Sandy was bearing down on New England..... (over a year and a half ago!) to distract me from the possible trouble.... (which thankfully did not come to my neighborhood)..... and I always intended it to be a house for my Witches. I have named it "Rose Thorn Cottage". The kit is cute on the outside but has numerous design flaws for the interior! It comes with a ladder to the loft, which they intend you to place along the back wall to the right of the fireplace, with the opening to the loft under the only tall roof area on the upstairs (where I have positioned the bed). With this arrangement, there is nowhere to place furniture! I tried moving the stairs to the center of the kit.... but they take up too much room in the small floorspace. I also wanted to make a small bathroom in the back corner to the right, since this kit is relatively deep. I also wanted to enlarge the hearth area, since the original fireplace opening is cute but Tiny! Here below you can see the very unsatisfactory first modifications..... 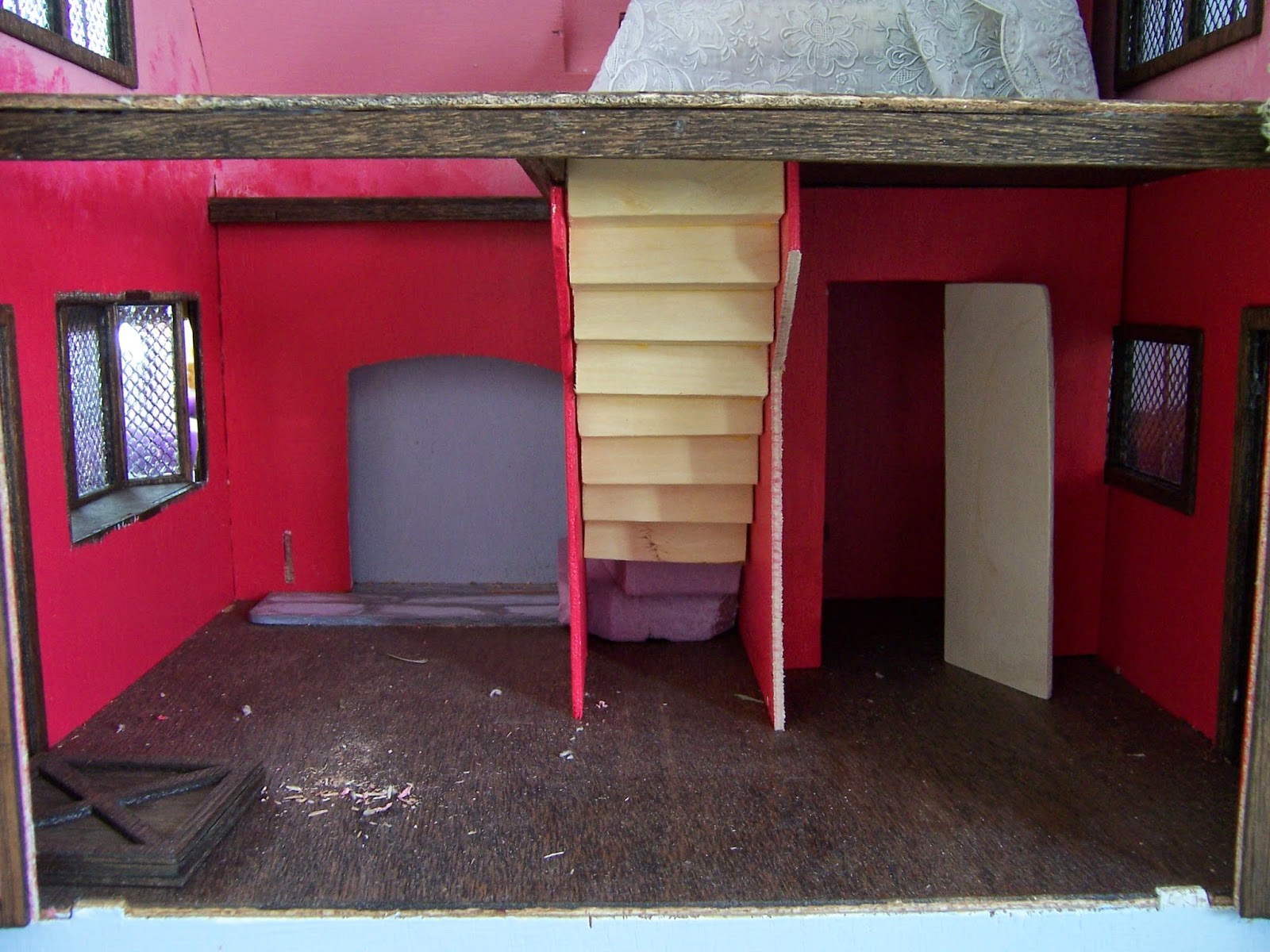 A Long Time ago I had seen a picture of a stone stairway curving up into a wall behind the hearth... (I am not sure where I saw it)... and that was what I really wanted to make for this cottage... but I didn't think I had the room to make it work. But when I saw Elizabeth at "Studio E" Blog have so much success with fitting her stove in under the stairs in her little house.... I thought I should give it another try! 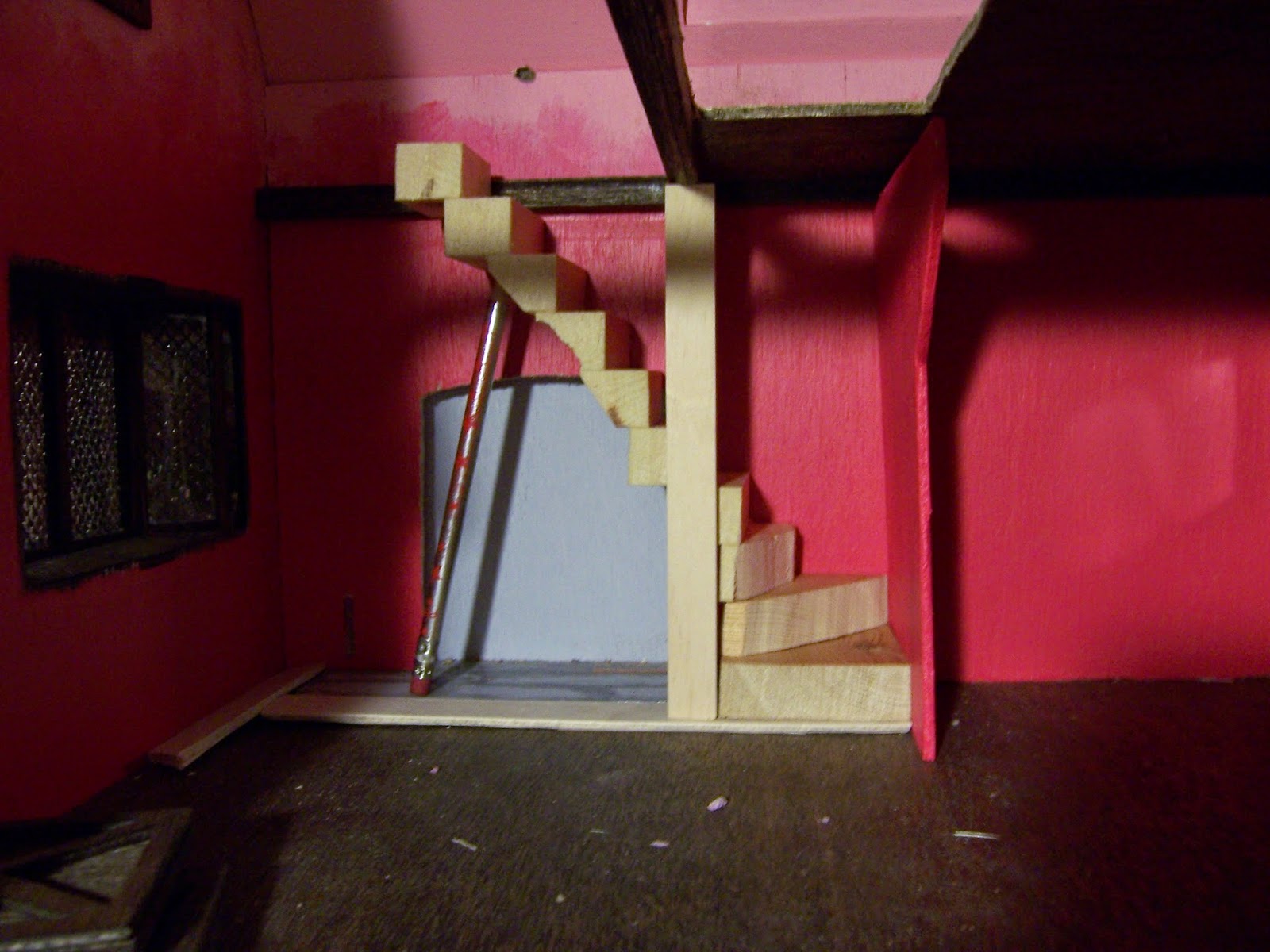 I re-worked my already partially built stairs,
carving off the underside of the stair blocks,
thereby narrowing the space they took up vertically.
I also added the turned stairs at the bottom.
Here you can see me testing them in place. 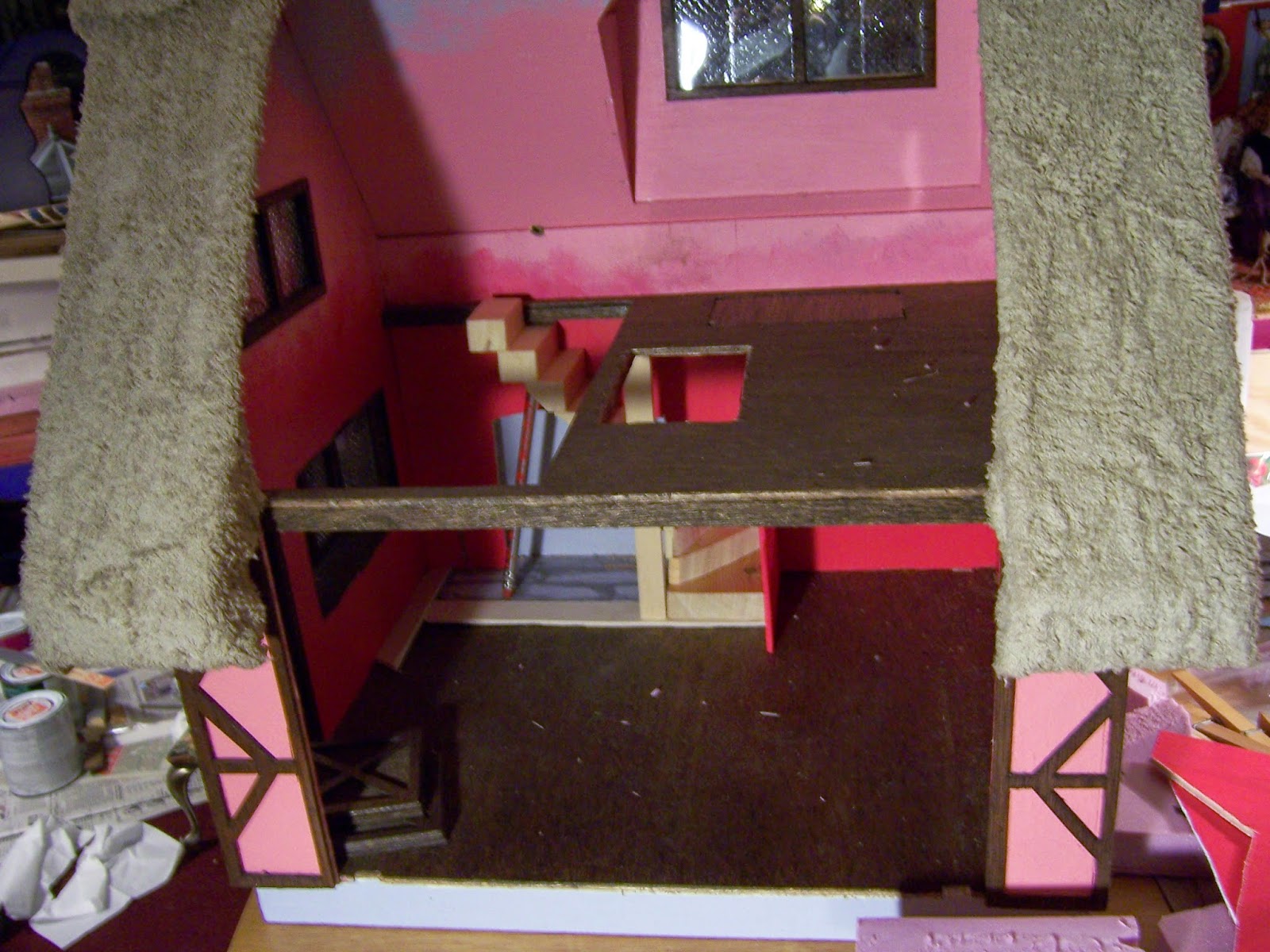 Here you can see they have plenty of room to "land" at the back of the open loft area,
which I planned to cover over anyway, making a solid second floor.
You can also see where the stairs would have come up in the middle...
and you can see the patched opening in the floor at the back right,
where the kit had designed the stairs to go.

I really just needed to decide whether there was room for the hearth and stove
under the stairs in the new position! 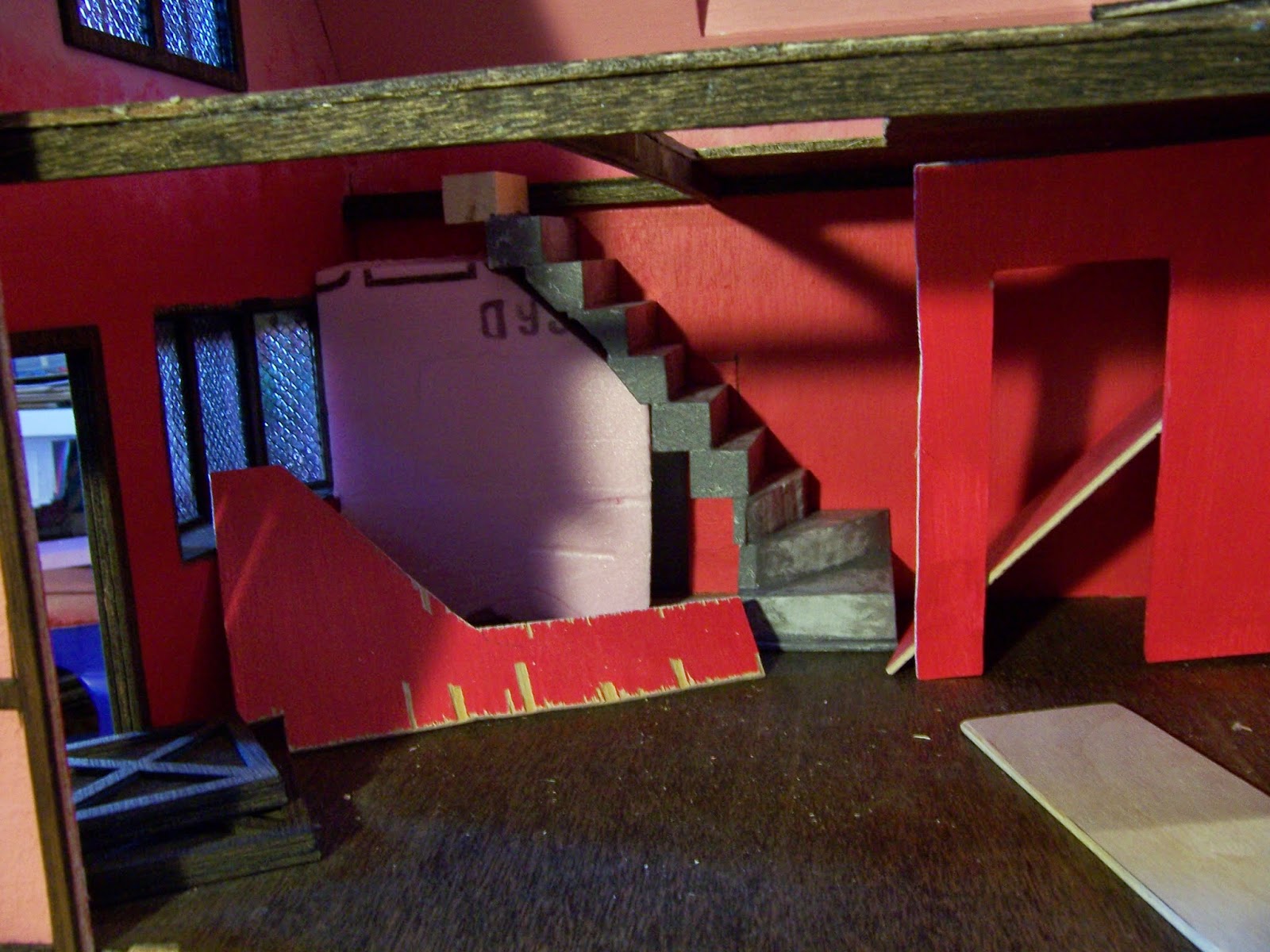 I am starting with a block of the pink builders foam insulation
which has become my go-to material for constructing chimneys and stairs! 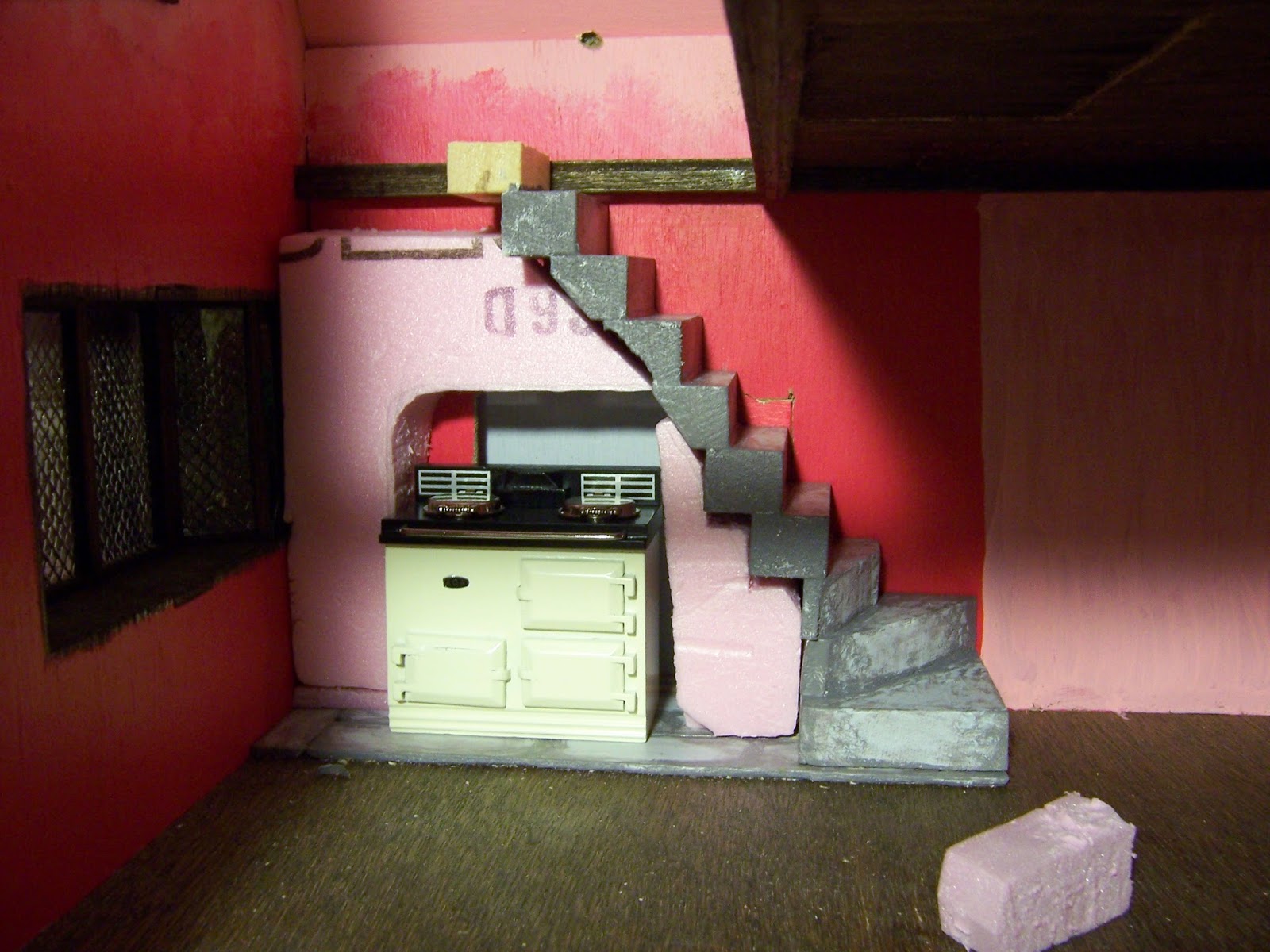 Then I needed to cut out the area for the "fireplace"
which would need to be large enough for this "Aga" stove.... 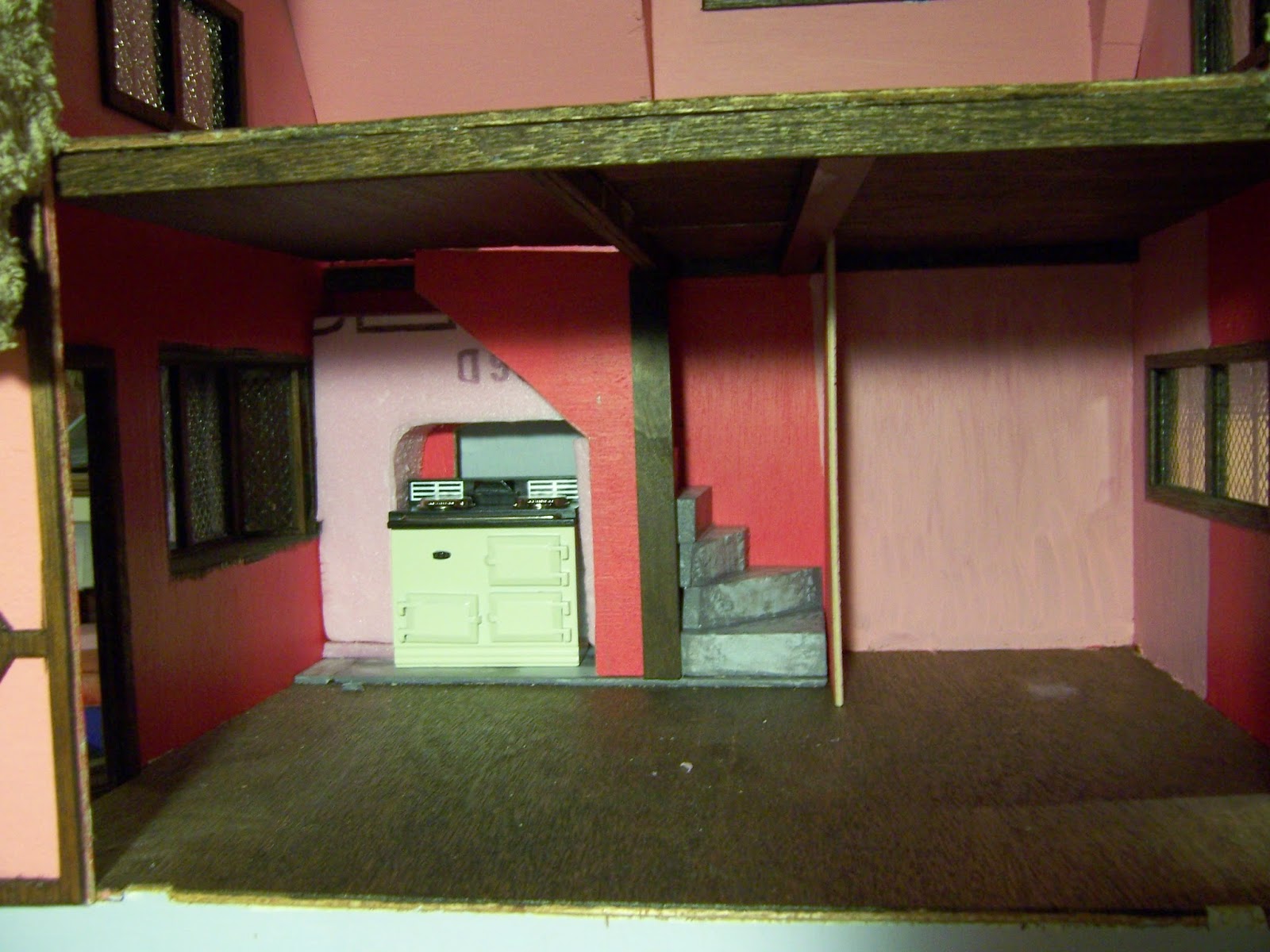 Here I am trying to see how it will fit and look
with the wall section going upstairs filled in...
And you can see I have also painted the area that will be the bathroom on the right....
It is now a lovely deep pink! 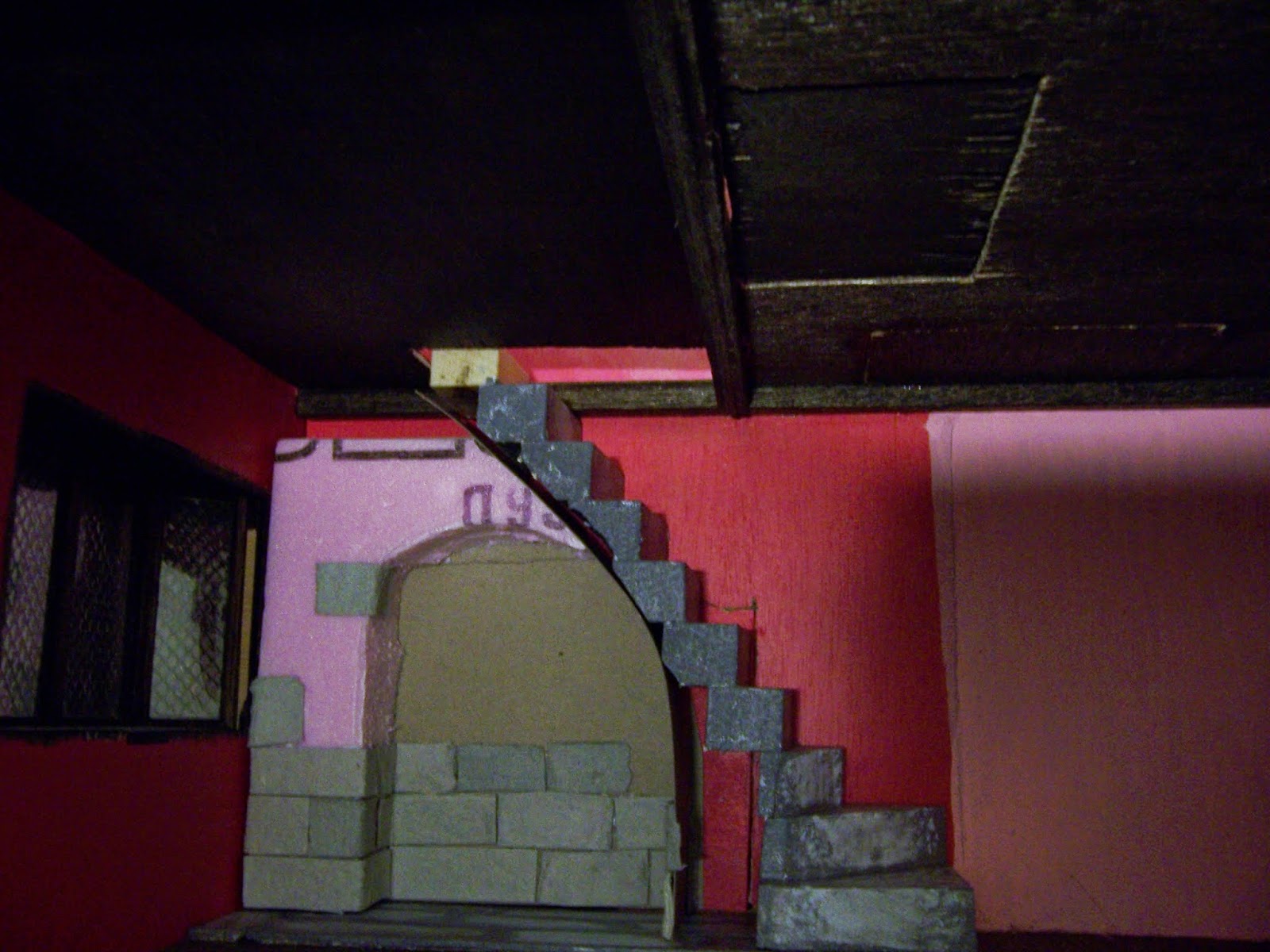 And having determined that there really was enough room to put the stairs here, I just needed to refine the opening for the hearth and get started with the egg carton stones!
It always takes longer than I think to cut and position those egg carton pieces! 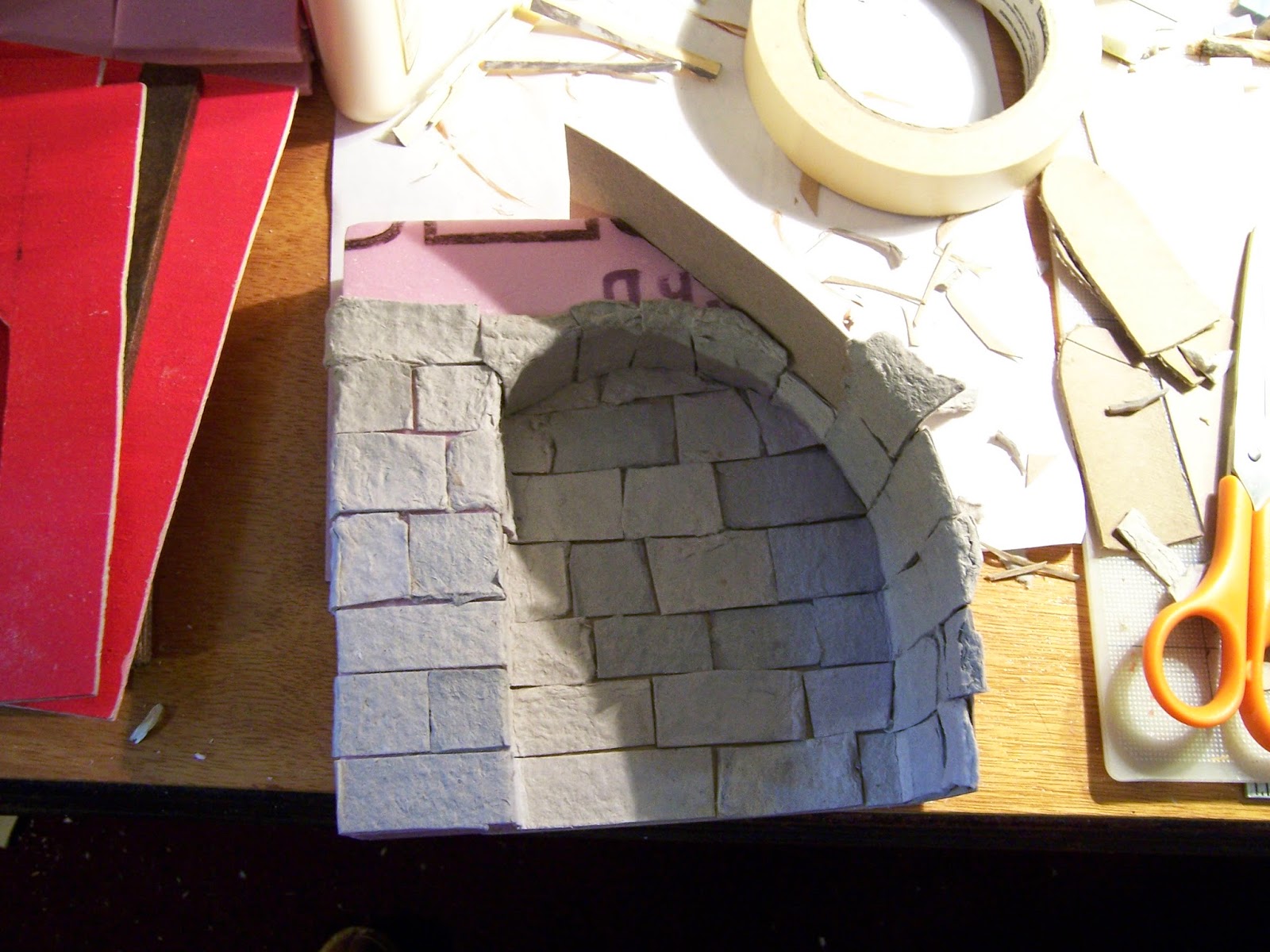 Here you can see the opening for the hearth without the front wall,
which I thought I would make out of wood.....
Until I realized it would be much better to make it all into
the "rocks" that the chimney is made of! 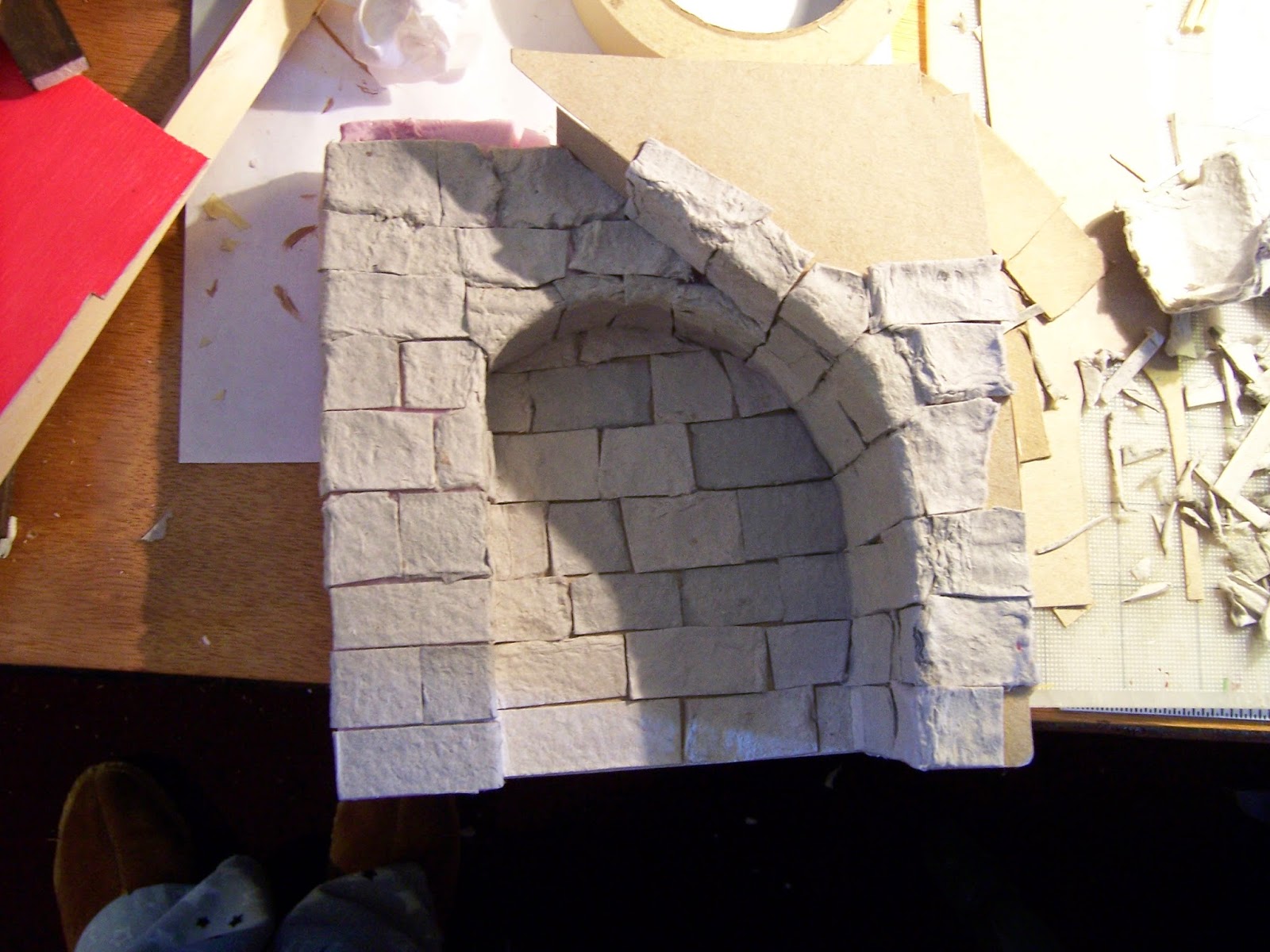 It looks so much better that way, Dear Readers,
and is ever so much easier to cut and shape in this tight opening!
(By the way, for the Realists of you out there,
the actual opening for the chimney "flue"
would be at the top back of the arched opening....
but I am anticipating that no-one will be able to see
that the "flue" is just painted on in this case...!) 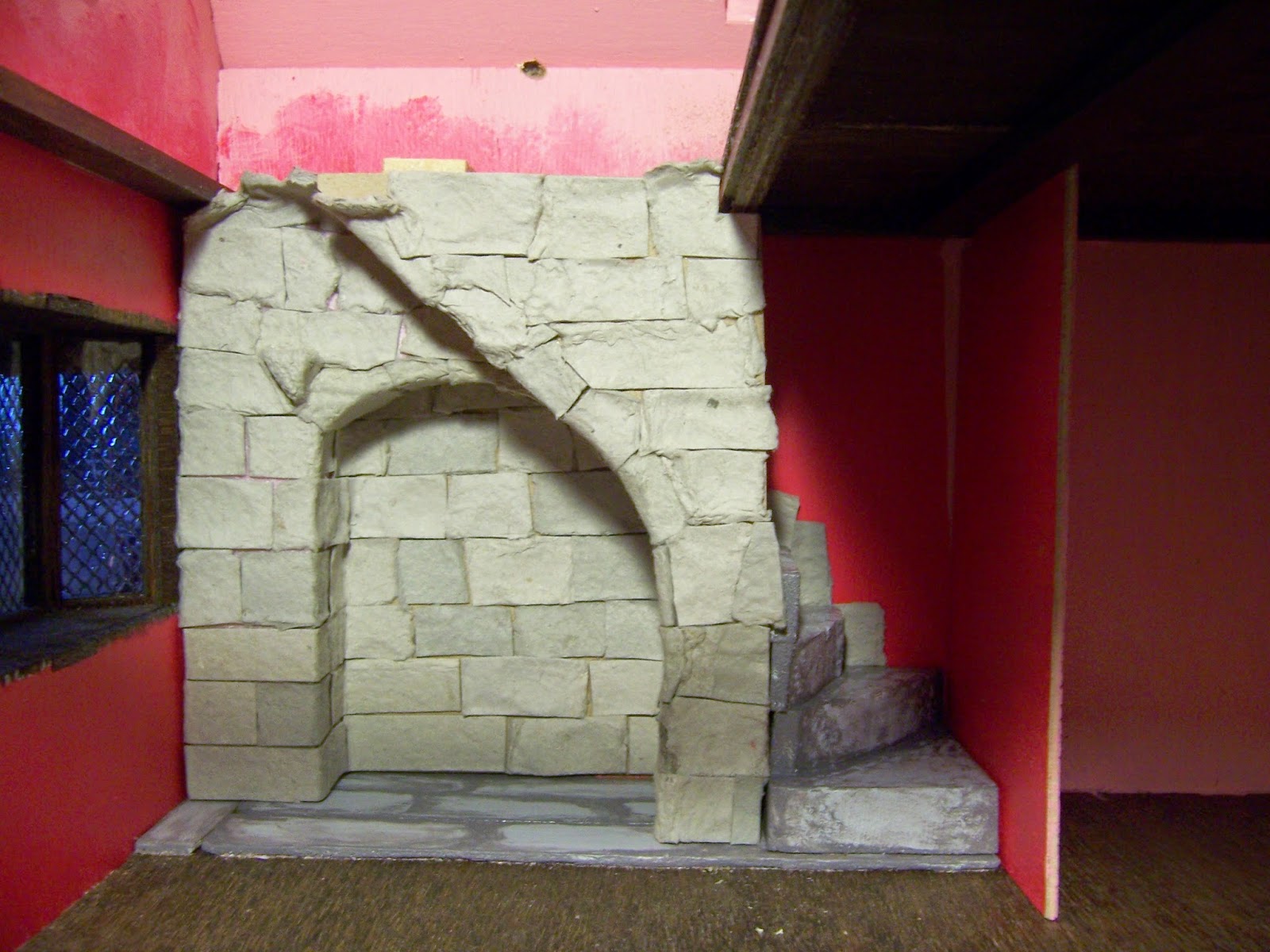 Of course, I had to test it in place again and again! 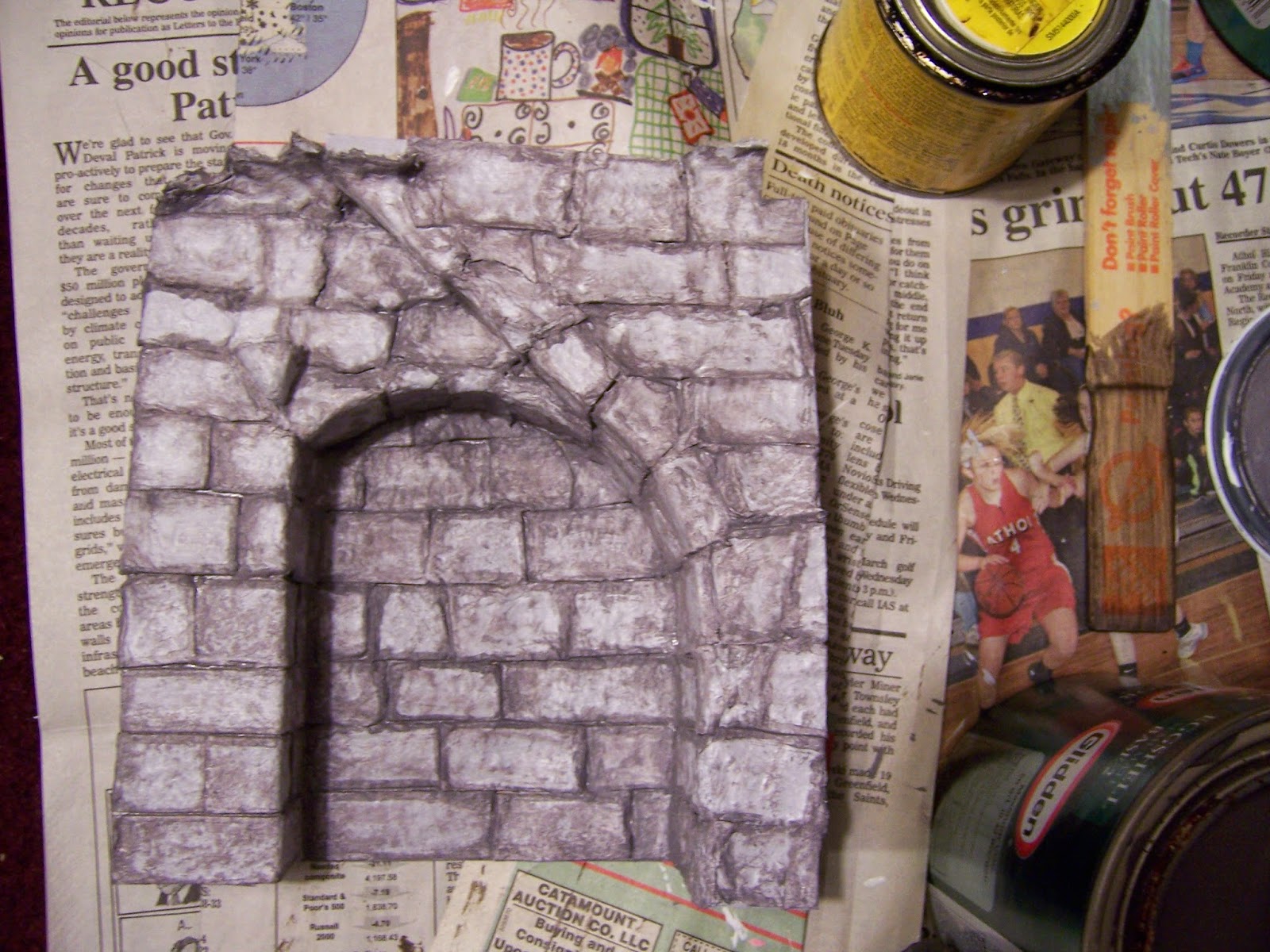 And then I had to paint it to resemble rocks...!
This is just the first few coats... gray and darker gray...
There will be more details added! 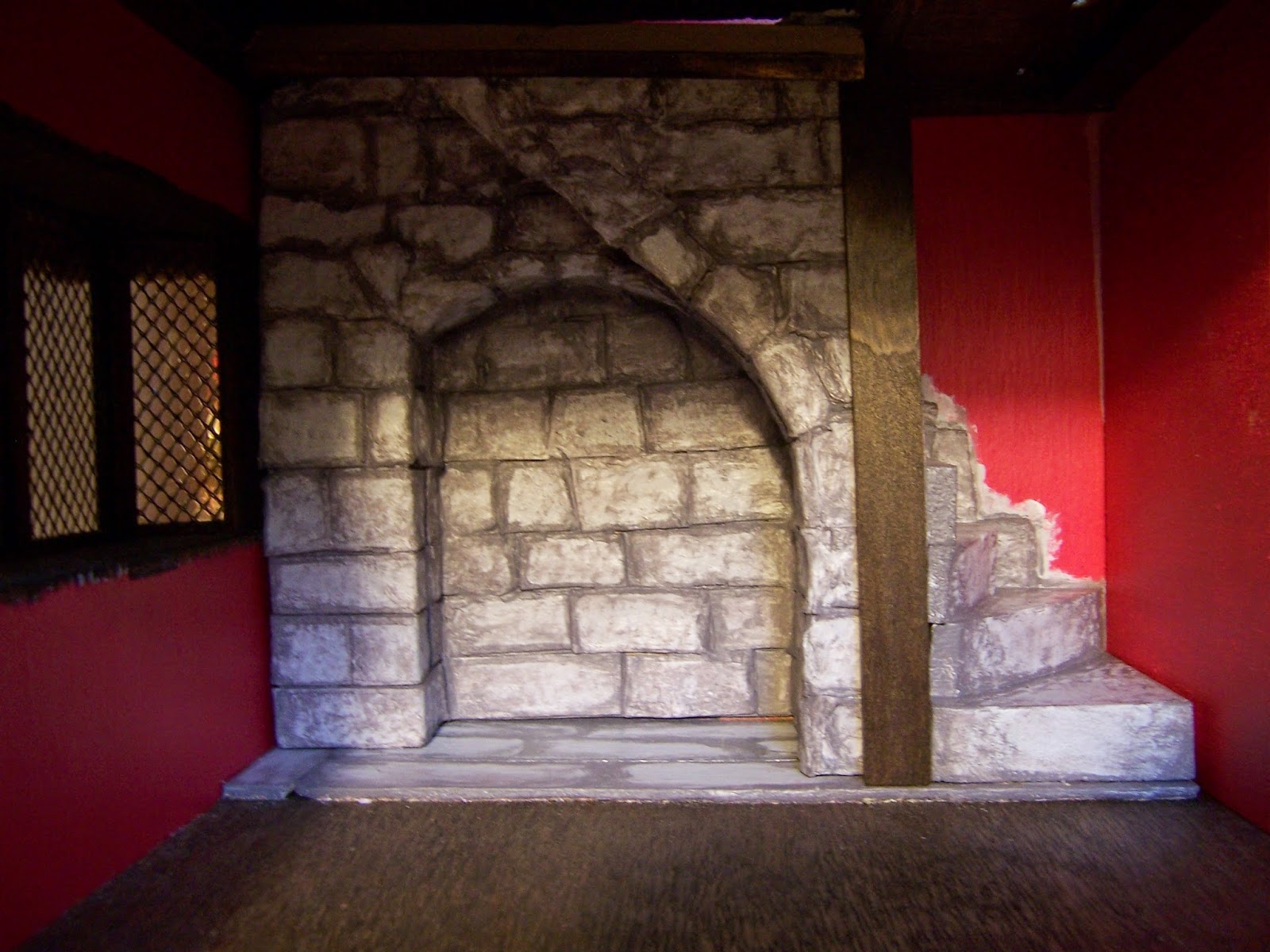 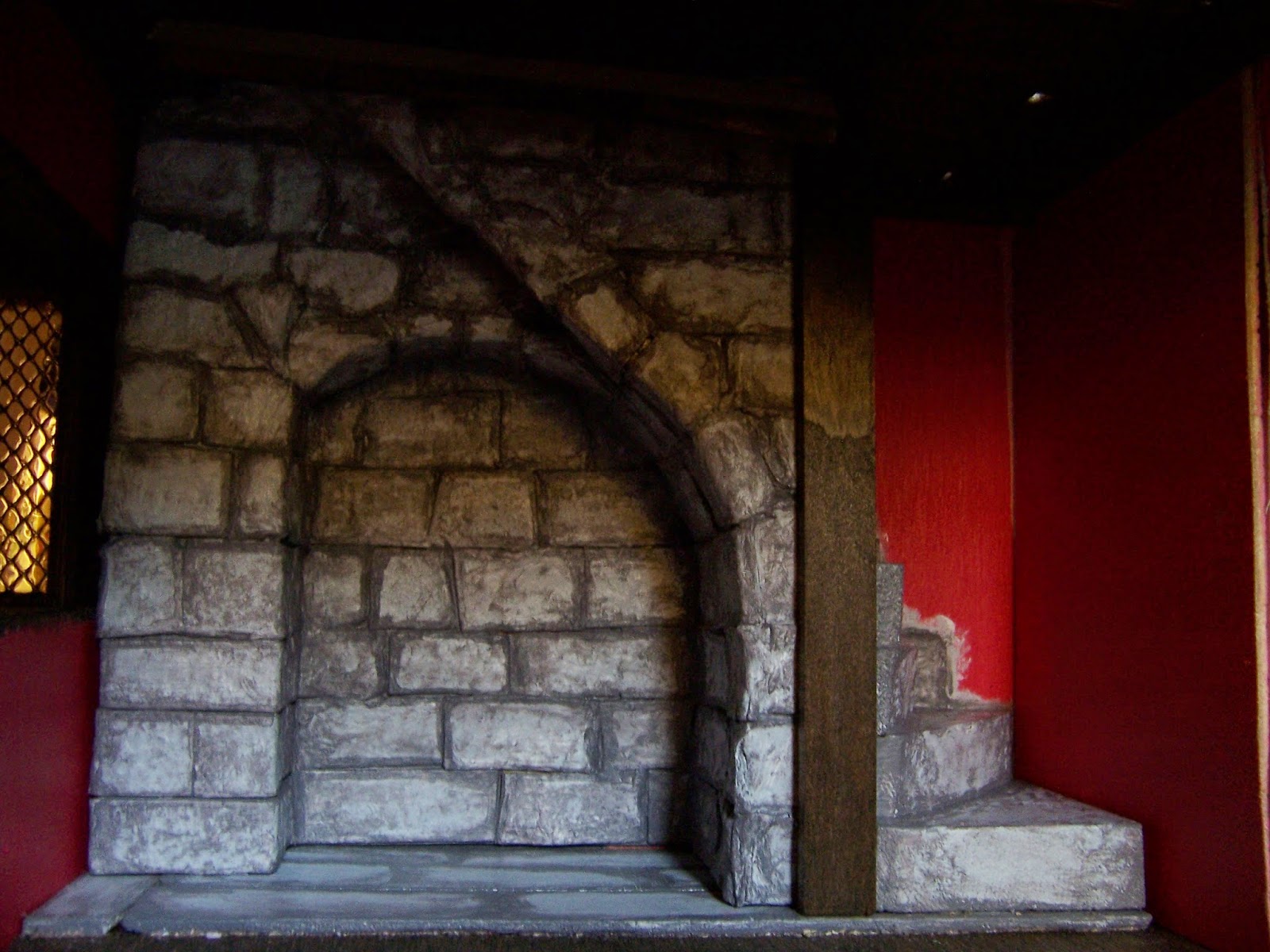 And a little closer to see those rocks.....!
I think it is working! 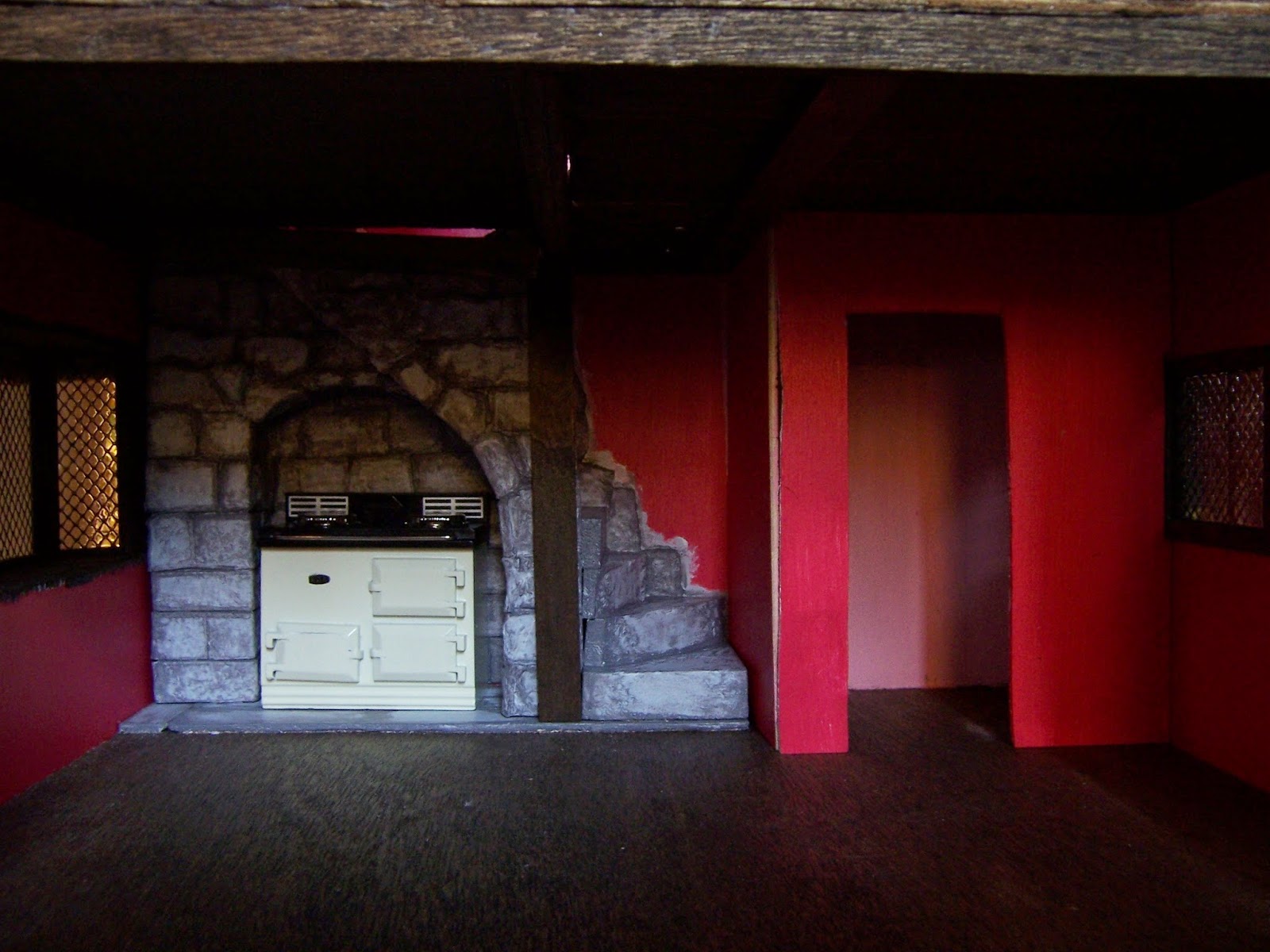 Here you can see it with the Aga stove tucked into the opening......
(It all still looks Waaayy too new for my liking...!)
And on the right you can see the little room that will be the bath....
And there is plenty of floor space for the basic living area.... 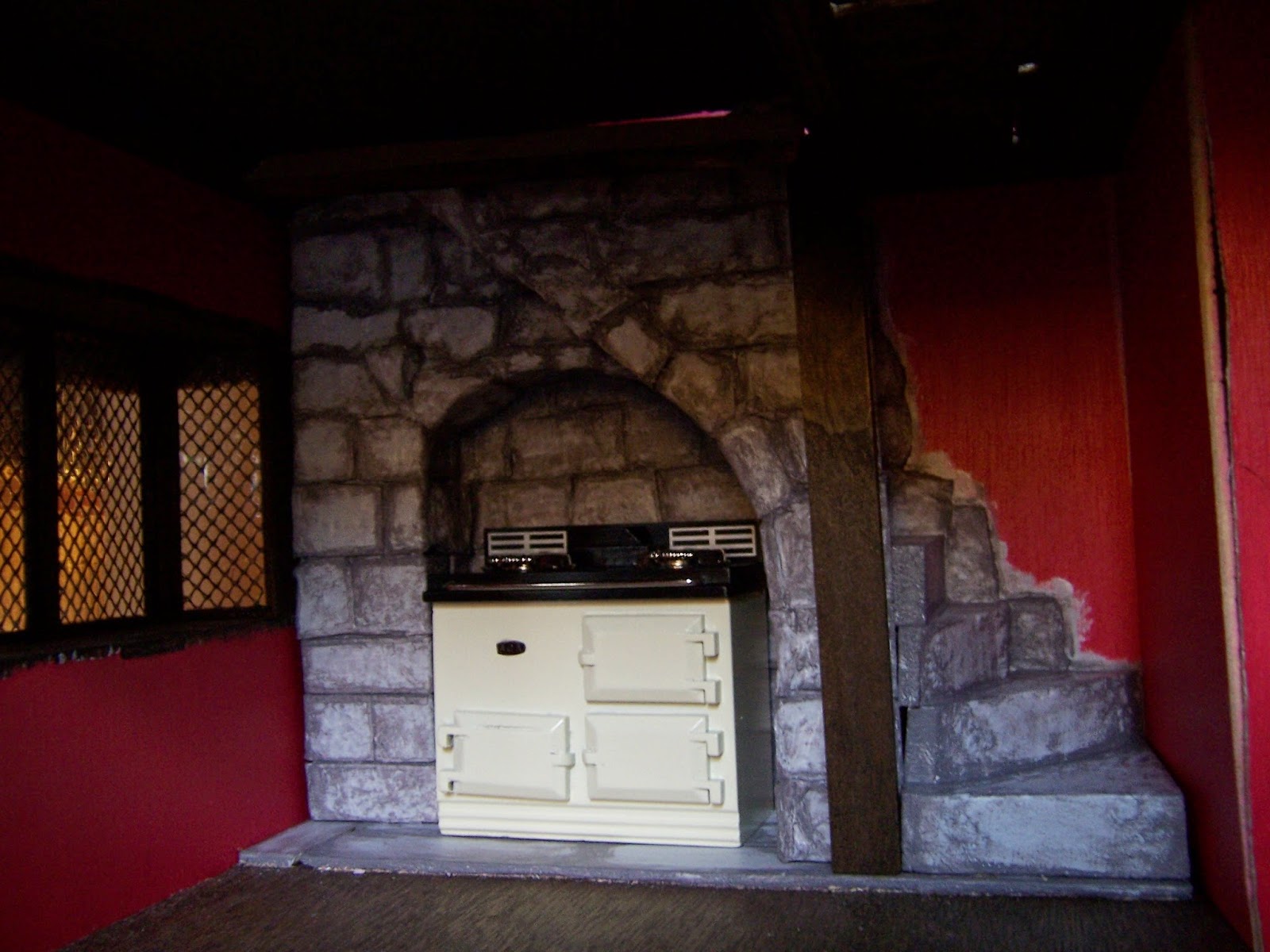 Here you can come closer....
I can almost feel the warmth radiating from the stove! 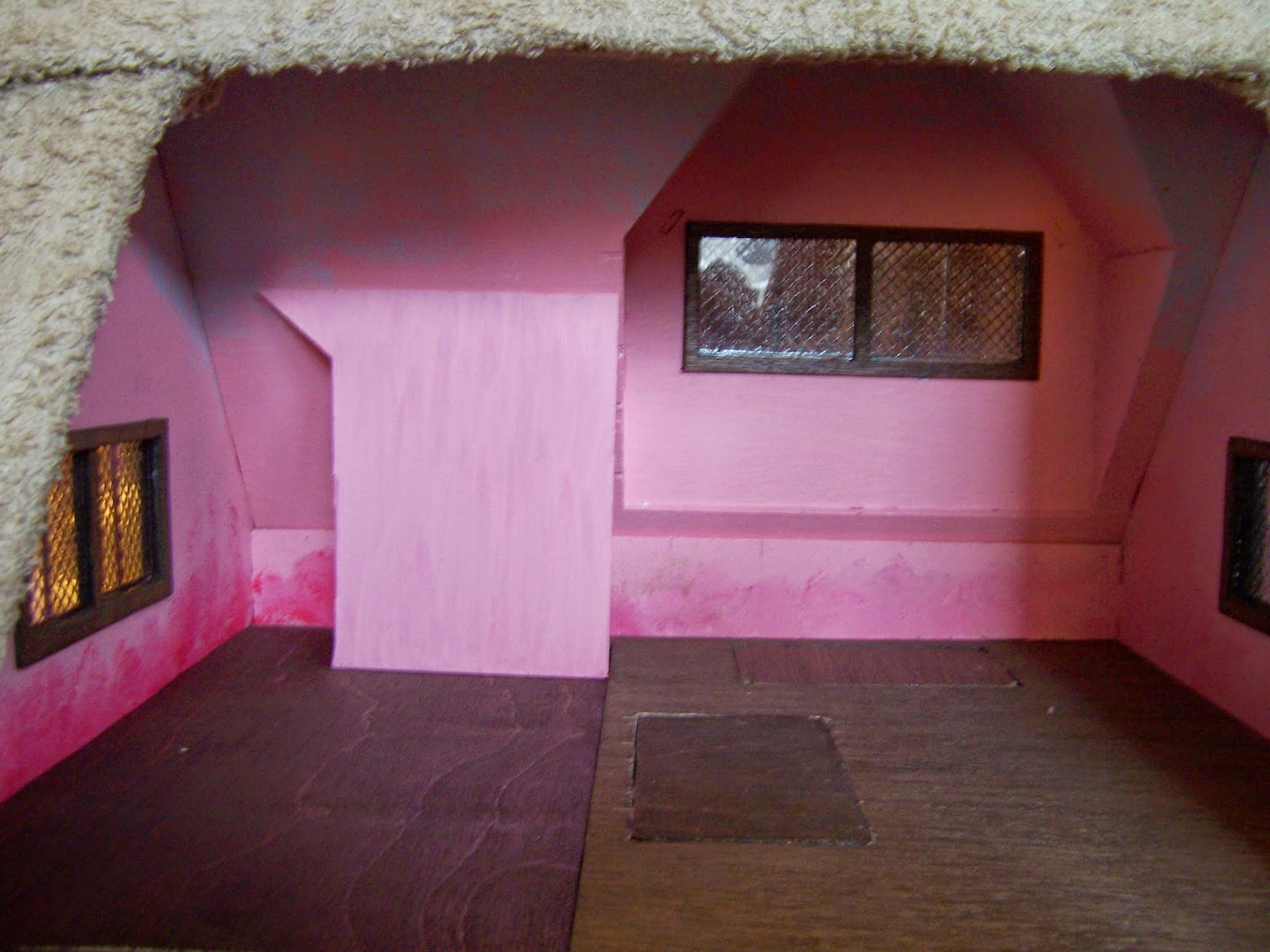 And in the upstairs, there is the wall at the back where the stairs open....
and I plan to add a dividing wall where the loft used to end,
making two rooms instead of just one. 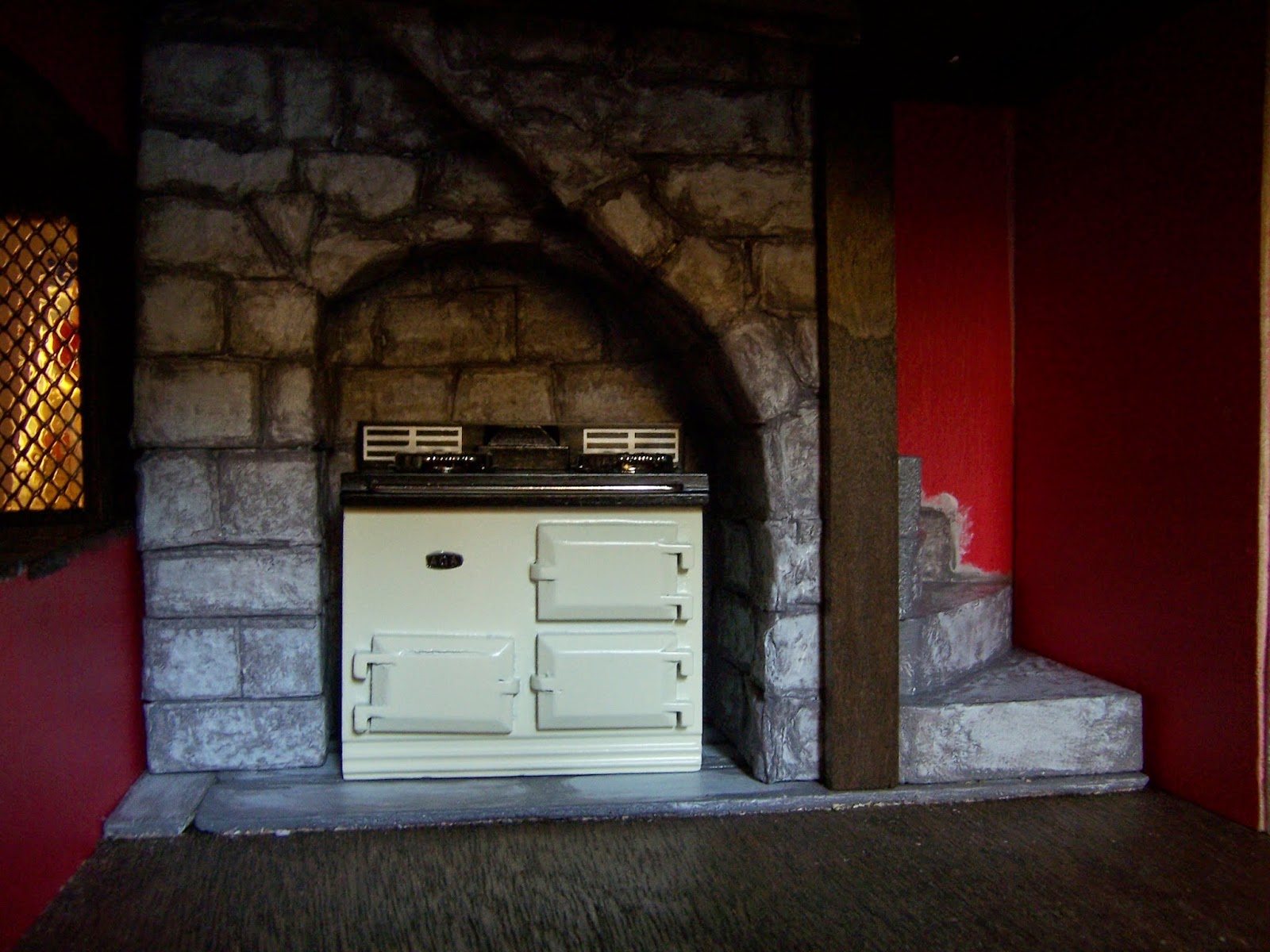 I think I am liking this!
I have Tons to do still to make this Cottage Habitable....
And I Don't blame you at all, Dear Readers,
If you are wondering Just where are we Going Now....
But I am really Happy with these Long Overdue Changes!!!