Travels Near And Far.... 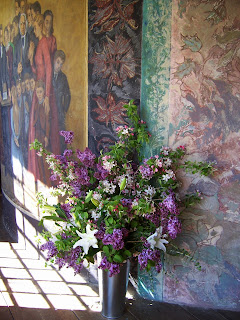 I Hope you will forgive me, Dear Readers, if I take you on a Journey to a place that is Far Far Away and not altogether Certain of its Time. I traveled last weekend to a place near where I had lived in my teenaged years, in order to attend a Memorial Service for the Late Husband of a Dear Friend. The Memorial was held in a tiny, old New England Meeting House, situated at a crossroads in the middle of the woods, miles and miles from any other Village or Town buildings. This Meeting House was only about thirty miles from where we used to live, but it might as well have been in a different land altogether, as we had no idea then, of its existence or the Splendor it contained! On the exterior it was a normal White clapboard "Church" such as are liberally scattered across the New England landscape. 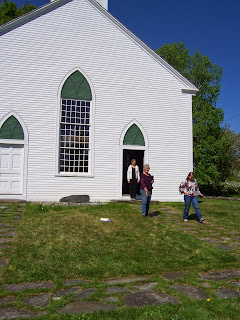 But the moment you cross the threshold,
you can see that it is no ordinary place! 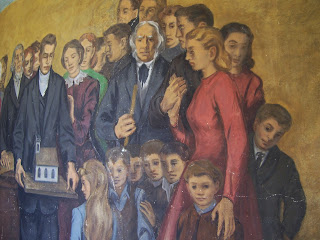 From the mural in the entrance vestibule
showing the "community" that tends the Church.... 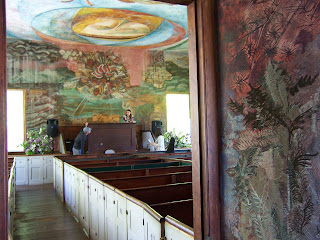 To the glimpse through the doors to the Hall itself.....
You can see that every square inch of wall and ceiling
has been painted in genuine "frescoes"
a la Michaelangelo!
(For those who might not know, a "fresco" is when
the paint is applied to the still damp plaster.
This way the pigment becomes part of the plaster
not just a surface coating like with normal paint.) 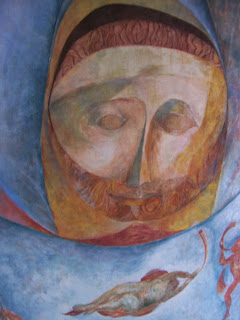 They were created in the 1950's by some artists
who were teachers at the nearby "Skowhegan School"
a summer Arts School of some renown. 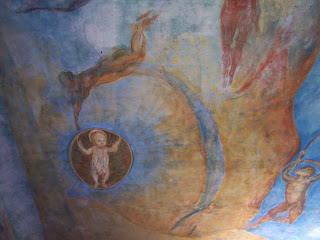 The Themes are clearly Religious, suiting the nature of the Meeting House,
but are modern in their style, and varied from artist to artist.
I believe Eleven different artists contributed, but I do not know their names. 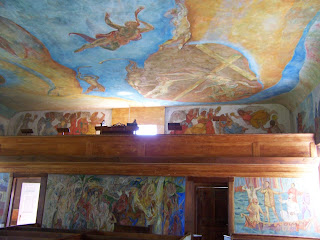 Here is the view looking back to the choir loft above the entrances.
I took a great many pictures, and will not bore you with All of them....
One of my favorites is this Noah's Ark with the Dove..... 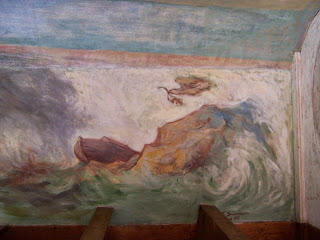 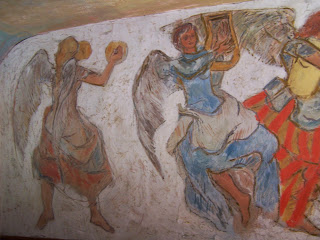 And Play their harps.... 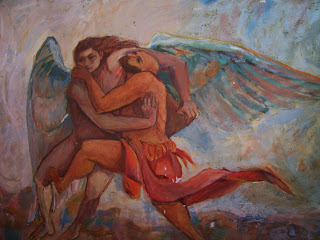 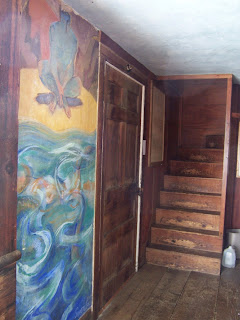 All the interior woodwork is the original unpainted pine....
here are the stairs to the choir loft..... 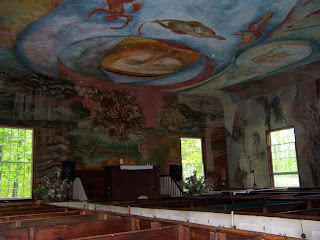 Simply constructed..... all the pews with doors
(almost the only painted parts!)
Such an utterly unexpected and Glorious Creation! 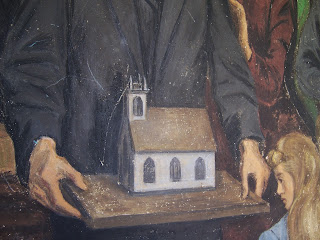 And a close-up of the "Church" in the hands of the people!

And I hope you will forgive me even More, Dear Readers,
if I skip you from that heightened plane to the lowly world
of my painted rocks for the Cloud Palace Tower!
We don't even have to Travel far to see it..... 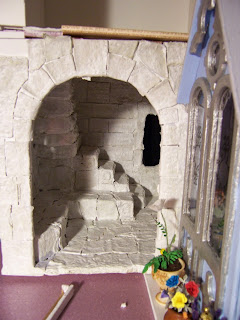 I did apply myself diligently after all
and covered the interior of the Tower with egg carton "rocks"!
Above you can see the only picture taken before I began to paint them....
It is late at night and the lighting is terrible.... 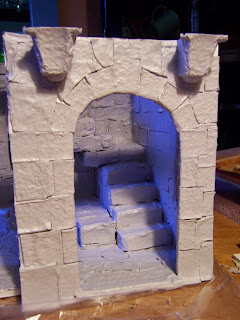 Here you can see the Front corner with the first coat of gray paint applied
this was after the primer, of course. 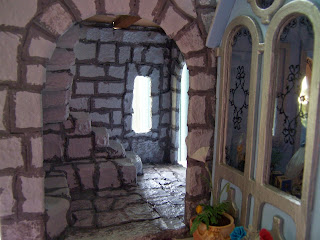 And here you can see where I have started to paint
all the "cracks" between the rocks a darker gray...
It is really quite tricky to get the paint all the way into the cracks!
(I am reminded that I should have under-painted the walls
with a dark color before gluing on all the "rocks"!) 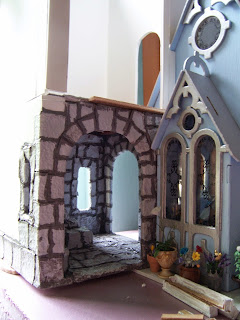 It will take many more layers of paint to make
the "rocks" look anything at all like rocks!
It is a Journey that is only just begun!

And Speaking of Journeys, Dear Readers,
I have to share with you another Journey that has just begun....
Well, actually, it began a while ago when my Sister was visiting,
and we agreed that it might be a nice thing if there were
a couple of Fairy Bearys to come live in her Cottage Doll House!
So I asked Birgit....
(really, she Must be tired of hearing from me by now! LOL!)

And Birgit worked some of her Magic..... 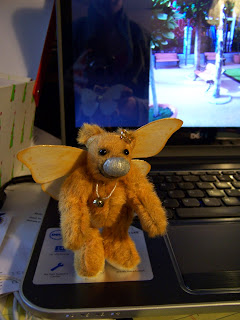 And she sent "Buttercup" 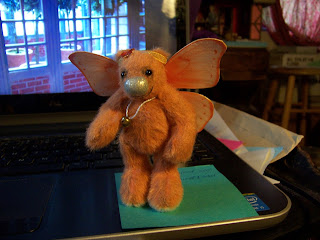 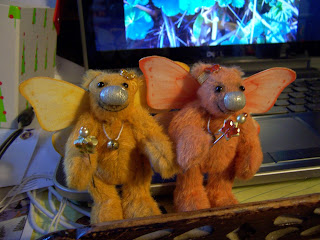 Two sister Fairy Bearys......
who have come to see the Cloud Palace and all the Beary gang
on their way to my Sister's Cottage Doll House!
They are very much alike and completely different at the same time....
just like Sisters so often are!
But I must confess there is only one little problem......
The Minute they arrived here they flew off to the nearest Dollhouse.....
And so it was that Beatrice awoke one afternoon from her nap
and found the two Fairy Bearys standing in her room! 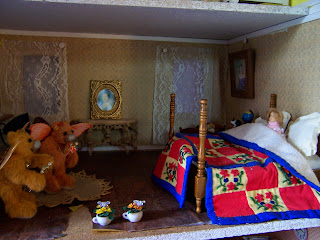 "Who are you?" asked Beatrice in her most polite voice.
(She was familiar with seeing other small creatures talk....
so she was not surprised when they answered her!) 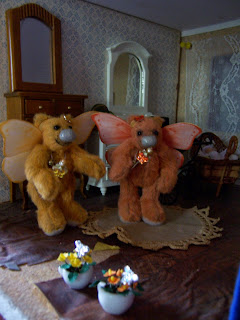 "We are Buttercup and Marmalade" said Buttercup.....
"And we have come to visit the Cloud Palace" added Marmalade. 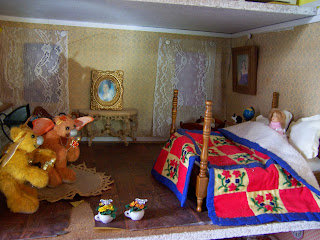 "There's a Cloud Palace?" said Beatrice, her eyes opening wide!
"I've never seen a Cloud Palace" she added,
"all I've seen is the Old Castle ruins.
But they are Dangerous and I'm not supposed to go there!"
"Hmmmm...."  said Marmalade...
"I am certain there is A Cloud Palace somewhere here...."
"We're supposed to visit our Cousins
on our way to our new Home...." added Buttercup!
"I've never heard of the Cloud Palace," declared Beatrice.
But privately she thought that maybe she would ask her
brother Tommy if he knew anything about a Cloud Palace.
But she didn't want to let Tommy know that she was talking to Animals again...
it made her Family a little worried!
Meanwhile, Buttercup and Marmalade asked if they
could stay for a while and rest from their long Travels.... 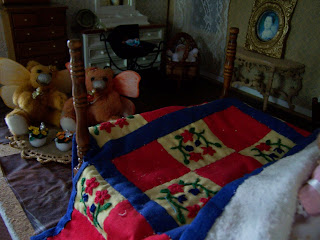 Beatrice said "Only if you promise to hide when anybody is coming!
They must'nt know you are here!"
"That's easy" said Buttercup...
"We'll just fly off when they are coming..." added Marmalade.
So it was decided that they could rest a while
and tell Beatrice all about their Journey!

Well, Dear Readers, I must leave you here,
at the Beginning of another Long Journey.....
For in case you hadn't guessed,
The Fairy Bearys have arrived in the Right place...
But in the Wrong Time!
(Beatrice lives in the year 1852.....)
So I hope you can forgive me for leaving you here
After Traveling Far and Near
And Losing All track of Time!
Posted by Daydreamer at 10:55 PM