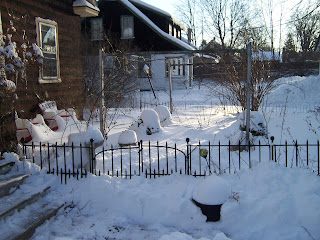 Progress Is Progress....Even If Small!

A Week ago, Dear Readers, the ground in my garden was bare and snowdrops were blooming. The clocks had been turned ahead an hour, making the evenings sunny long after returning from work. It was so easy to think that Spring was almost here! But then it turned bitter cold again, and we were reminded very clearly that this is New England and it often snows even in early May.... and as I mentioned in my last post, it was snowing hard and continued all day. We did not get as much as some areas near here, but we did get a heavy 12 inches, and it stayed cold and windy so not much has melted. The above picture is the morning after the storm. And as I had mentioned, I had stayed home from work and I was sewing cushions to soften the blows of life... big and small.... 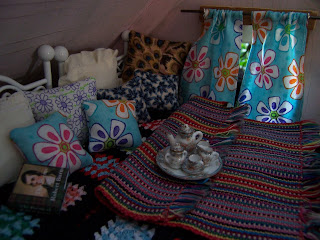 As you can see, I made quite a few more little cushions
for the attic room of The Lovely Old Dollhouse!
And between drinking many cups of tea,
I also stitched some more on the Tea cosy.... 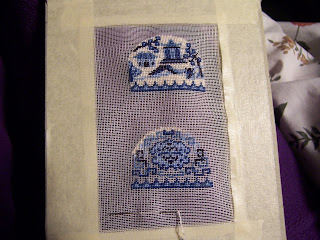 I completed all the blue threads
and have begun the cream background.
I find it quite difficult to sew the paler colors
because it is difficult to tell if the stitch is the cream thread
or just the white cloth showing.
I even attempted to paint some more on the Castle Hall ceiling,
but with the winds howling and the poor light of a stormy day,
I put it off for the weekend instead. 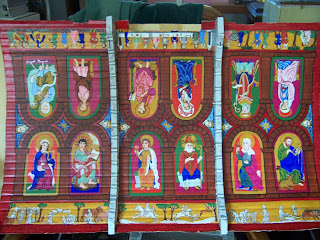 Meanwhile, Dear Readers, I have decided that
I am making finishing this ceiling a priority!
(I apologize for the blurry photo. It is very difficult
to get this ceiling photographed clearly!)
As you can see, the painting of
the peasant's labors has only just begun,
and half the Saints still need to be completed.
There is still a long way to go before this will be done!
I am leaving it set up on my "easel" and in the way
so that I will work at it often....
and hopefully complete it soon!
And I did make Some progress on the weekend.... 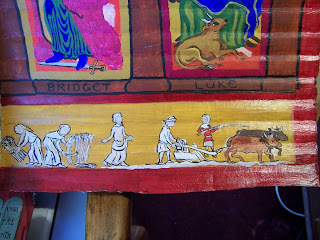 The individual characters all need to be given their basic colors first....
And since I have drawn from so many diverse
Medieval Miniatures as my sources...
I have to adapt the colors somewhat
in order to make this ceiling balanced. 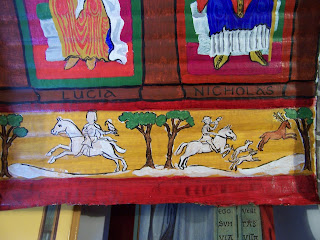 In these first pictures I have only added the flesh color,
which blurs the facial features.... 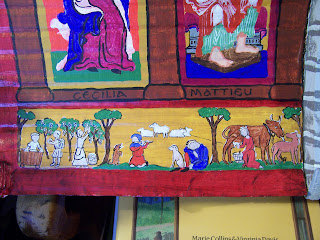 And here I have begun to paint the base colors for several of the figures.....
This is so I can get a feel for the overall color balance...
The detail work will be done later. 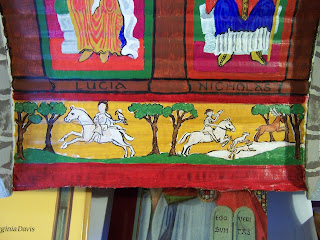 And then the subtle additions of more ground
and trees where the stag is leaping... 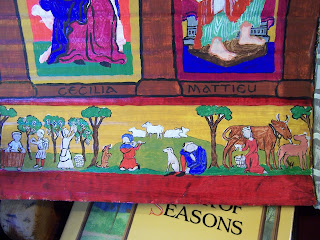 And ground where the sheep are flocking.... 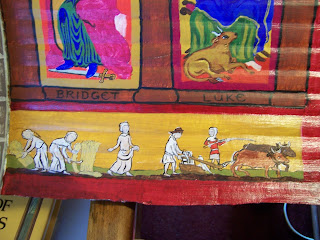 And earth that the oxen are plowing....
And here I am deviating from the originals,
because the Medieval paintings often lacked
the "background" that we assume is necessary! 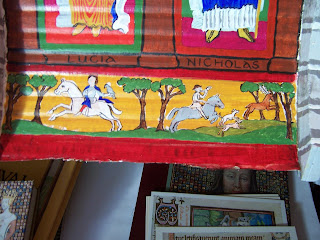 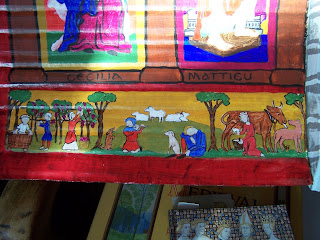 Again, I apologize for the blurry pictures! 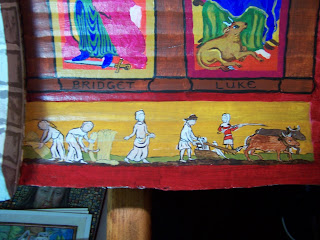 Still Such a Long way to go! 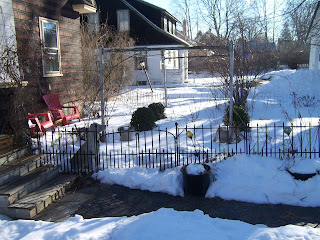 And the Garden too, still buried in snow...
after an entire week.... but it Is slowly melting!
And I am sticking with my Spring Optimism, Dear Readers,
Progress Is Progress, even if it is only little!

Posted by Daydreamer at 9:37 PM