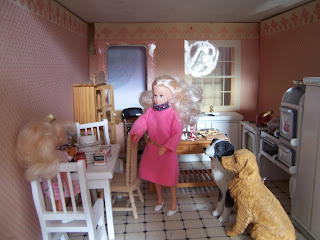 I Hope you are not surprised, Dear Readers, to learn that Sally May is thinking about Thanksgiving dinner. She is determined to gather with her loved ones this year, and she has been baking pies. "The pies are almost done, Annabelle," she says, "and as soon as they cool enough we will go over to see Gramma and Grampa and Great-grandma and Great-grandpa and have a feast!" 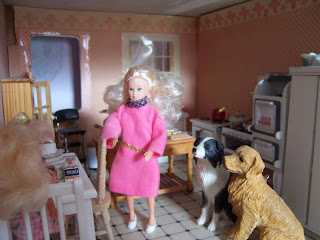 Everyone in her immediate family was vaccinated, so it should be safe enough to get together. Well, almost everybody, she reminded herself. Annabelle was too young to get the vaccine. And her in-laws, Chip's parents had refused to be vaccinated. Yes, they are that sort of independent crusty old New Englanders. And I hope you will not be too surprised to learn that Chip was not entirely sure they should go. He wasn't sure his folks would be welcome, and didn't want to leave them home by themselves. 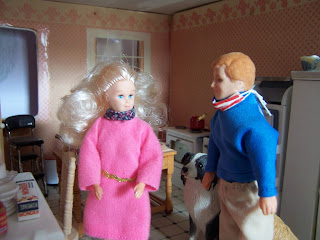 "Are you sure about this, Hon?" he asks Sally May,
(not for the first time!) 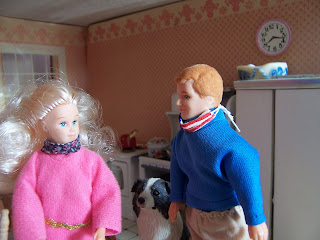 "Darling," said Sally May in her sweetest voice, "we've been over this already.
You know what I think , and why. I'm not changing my mind." 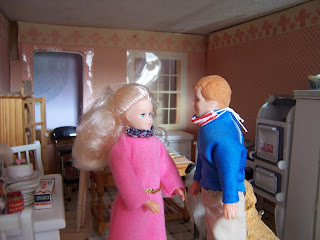 "Even if my folks can't come too?" he asked. 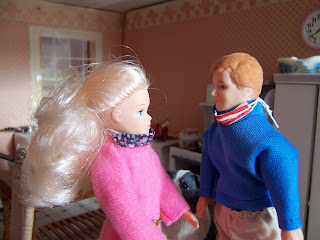 "Whether your Folks come or not is up to them." said Sally May bluntly.
"Just like whether or not to get the vaccine is up to them."
she added with just a touch of annoyance.
"I am taking Annabelle to Feast with her other relatives,
and I hope you will come too." she said quietly.
Meanwhile, over at The Lovely Old Dollhouse,
Joanna has learned that Chip's parents are not vaccinated
and she is sharing this news with Helen and Charles. 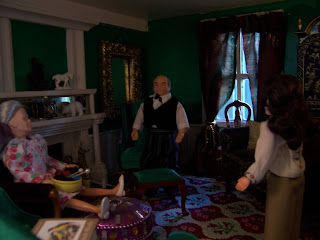 "It seems that they refuse to get the vaccine!" declared Joanna. 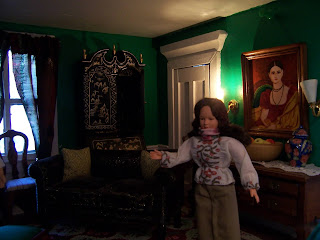 "Sally May says she is not sure if they will come to dinner," she added. 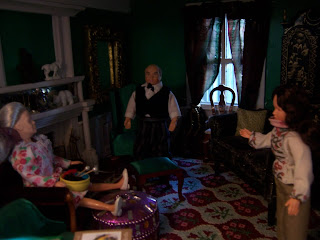 "Well," said Helen, cautiously, "We have all been vaccinated...
so it shouldn't matter to us. Should it?" she added uncertainly.
"Well," said Charles, "The medical advice is
to be careful even if you have been vaccinated!
But, I think it is unlikely that we would
catch the covid virus from them..." he added hopefully.
"We will only be together for a short while."
"And they have been careful." 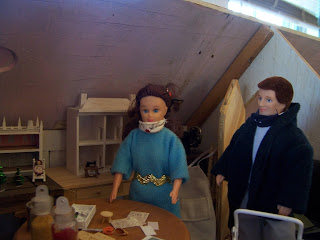 And way up in the attic of The Lovely Old Dollhouse,
Arthur and Pollyanna have been doing their favorite thing.
Some call it hanging out while being creative,
and some call it hiding from the Family.
"I think we will need to go downstairs soon," said Arthur.
"I hear the dogs barking. Somebody must have arrived" he added.
"And I should be helping with the dinner," added Pollyanna,
even though cooking was not her favorite activity. 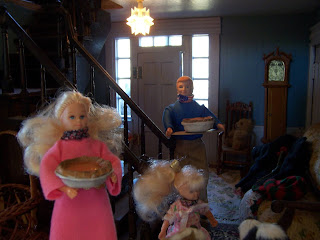 Sure enough, the barking dogs heralded the arrival of the Pies! 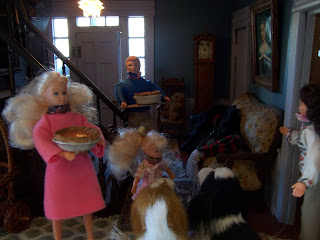 "Goodness!" declared Joanna. "Those pies look wonderful!"
"Bring them on in here!" she added. 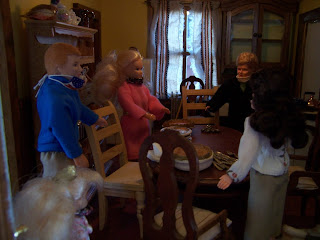 "I see the main course is here!" declared Victor, laughing!
"They look fabulous, Sweetie" he said to Sally May.
"I'm ready to start eating..." he chuckled. "You're just in time to help us with peeling
the squash and potatoes!" said Joanna cheerfully,
indicating a large basket full of vegetables.
"Uh, sure..." said Chip cautiously,
"Let me just go greet the 'Grands' first" he added,
and made his getaway. 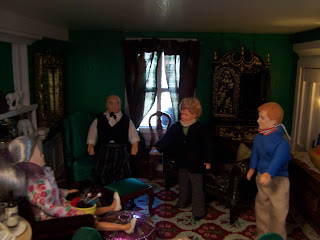 "I hear your folks didn't get vaccinated!" said Helen right away.
"Will they come to dinner anyway?" she added.
"Well," said Chip, feeling a little defensive,
"I think they'll come just for the meal.
They won't stay too long." he added.
"Well, I'm just glad you got the vaccine!" declared Helen.
"That's one less thing to worry about!" 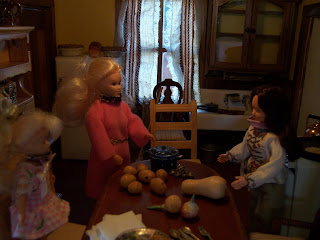 "I am so glad you came!" said Joanna to Sally May and Annabelle.
"We just don't get to see enough of you!" 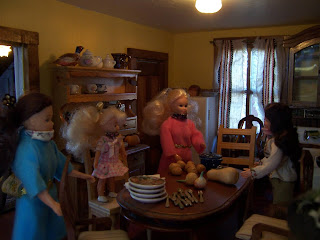 "And here's Pollyanna, just in time!" Joanna cried.
"It feels just like old times... I have both my girls here!"
"It does seem so strange" said Pollyanna,
"to be so near and yet spend so little time together!" 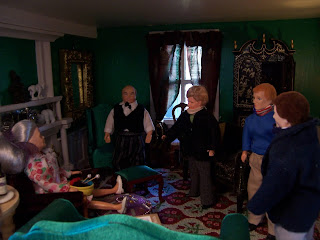 It didn't take Arthur long to join the folks in the Living Room.
Helen was enjoying all the attention of
her Son-in-law and Grandsons-in-law!
The time flew by and before anybody knew it,
Pollyanna was calling them to come eat! 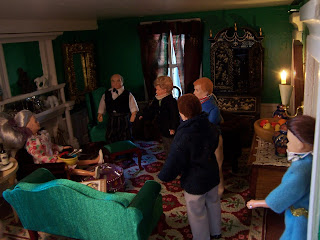 Sally May and Joanna spread the food on the table.
They would have to eat buffet style...
there wasn't room for everybody around the one table. 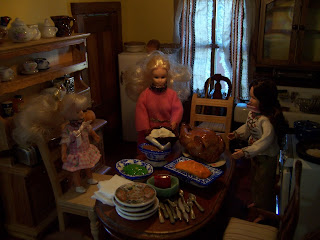 "Do we have everything...?" asks Joanna.
"I do hope Chip's folks get here soon.." said Sally May.
"I will feel awful if they don't come after all!" she added.
"Well," said Joanna, "It's up to them. So don't feel badly."
"I'm just so grateful you are here!"
she said smiling at her younger daughter.
"And here comes the crowd!" 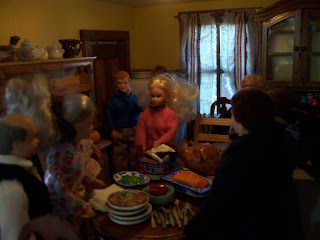 "Oh, My!" declared Helen, leaning close.
"That has to be the biggest and best Turkey ever!"
"Do you see it Charles?" she added.
"I don't think we've ever had such a grand turkey before!"
"Great job, Ladies!" Charles replied enthusiastically.
"You've outdone yourselves this time!" he added.
"We'll all be as fat and round as that Turkey
before too much longer!" he said with glee.
Just then there was a sound of voices in the Hallway. 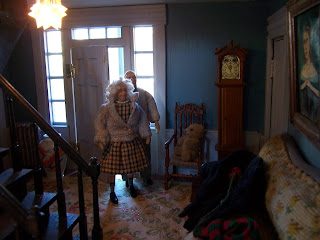 "Halooo there!" called Blanche.
"Anybody here...?" she added hopefully. 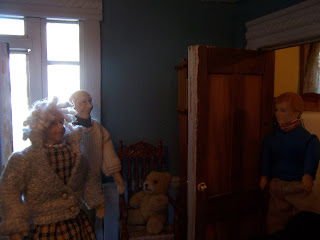 Chip came to greet them.
"Did we miss anything..?" asked Blanche.
"I hope we're not too late for the Turkey! declared Ernie.
"Nah, you're right on time!" said Chip.
"Come on in!" he added. 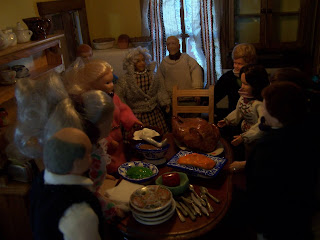 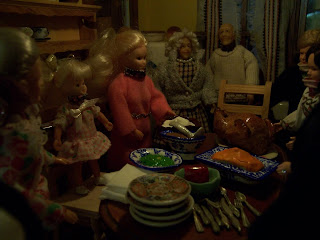 Posted by Daydreamer at 8:25 PM