The Key Of Time - Part Two 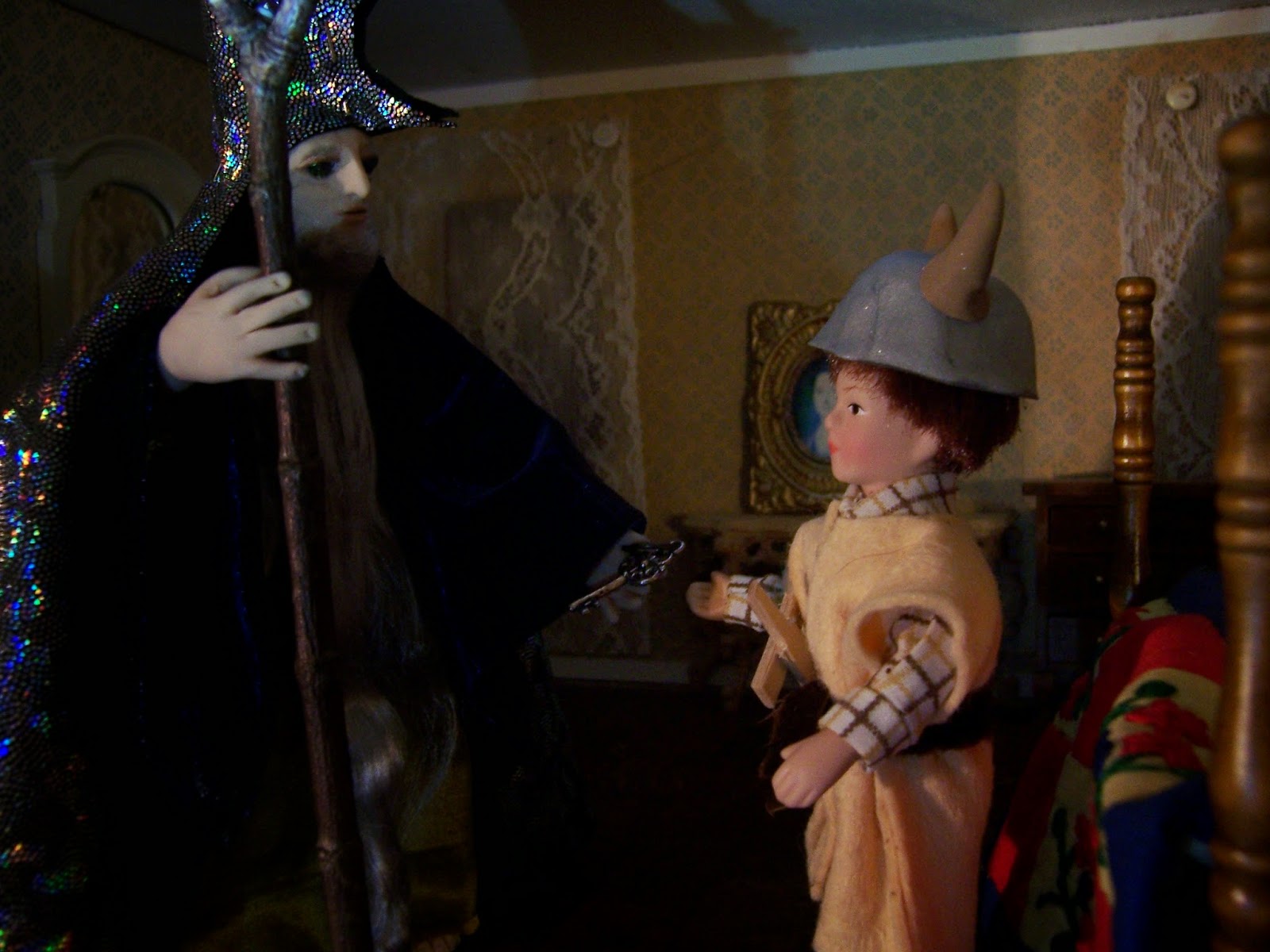 The Moment that Peregrine touched the Key, Dear Readers, he found himself standing at the Castle Door. It was dark but the moon was shining brightly and it was easy to see the large and ancient lock on the door. Mindful of the Wizard's instructions, he needed to be sure the key would open this door before he entered! 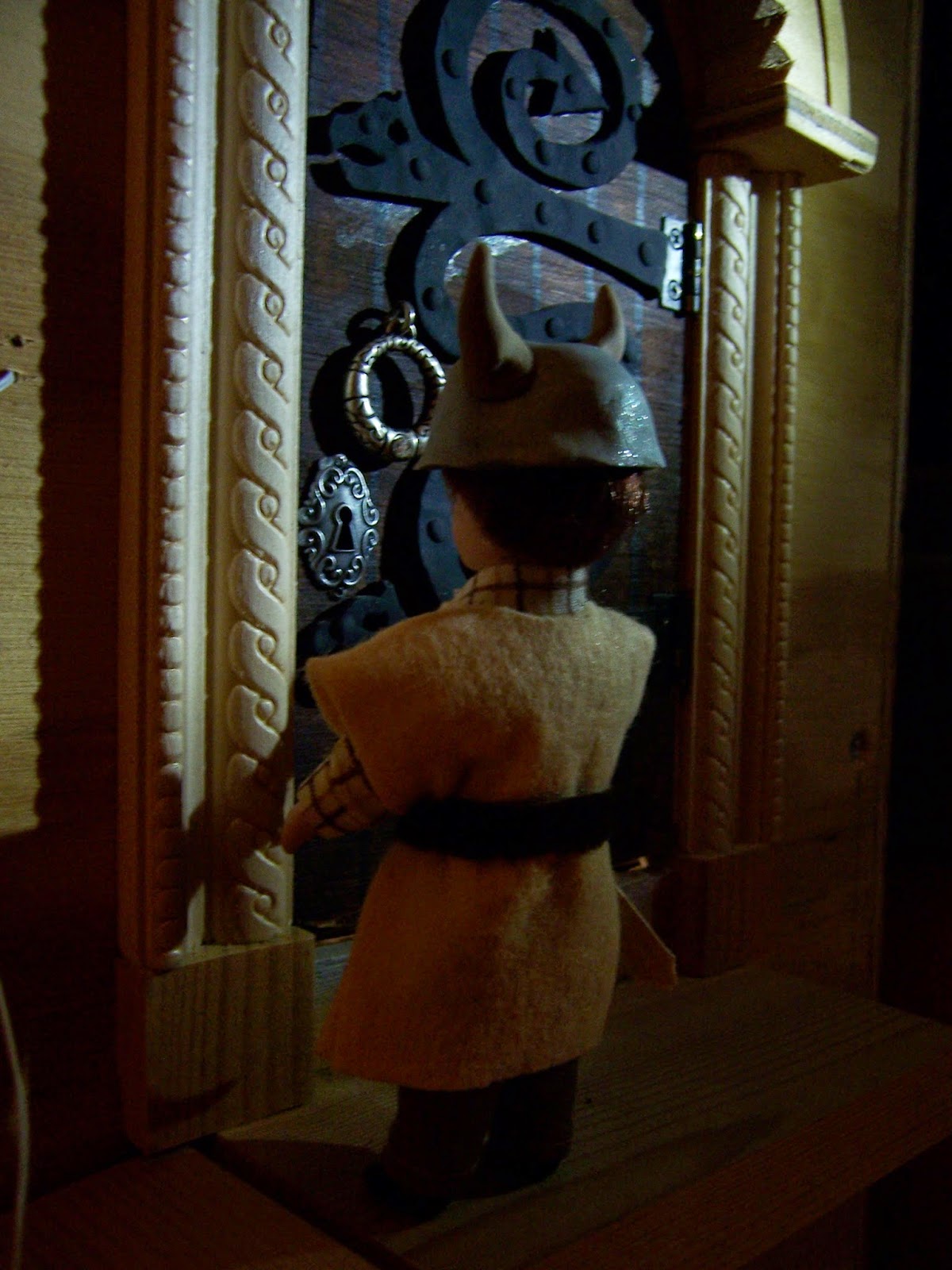 Perry took a deep breath and inserted the key into the lock.
It turned smoothly and the door swung silently open.

He looked cautiously into the Guard Room,
but it was empty.
So he entered and crossed to the large doors
on the opposite side of the room. 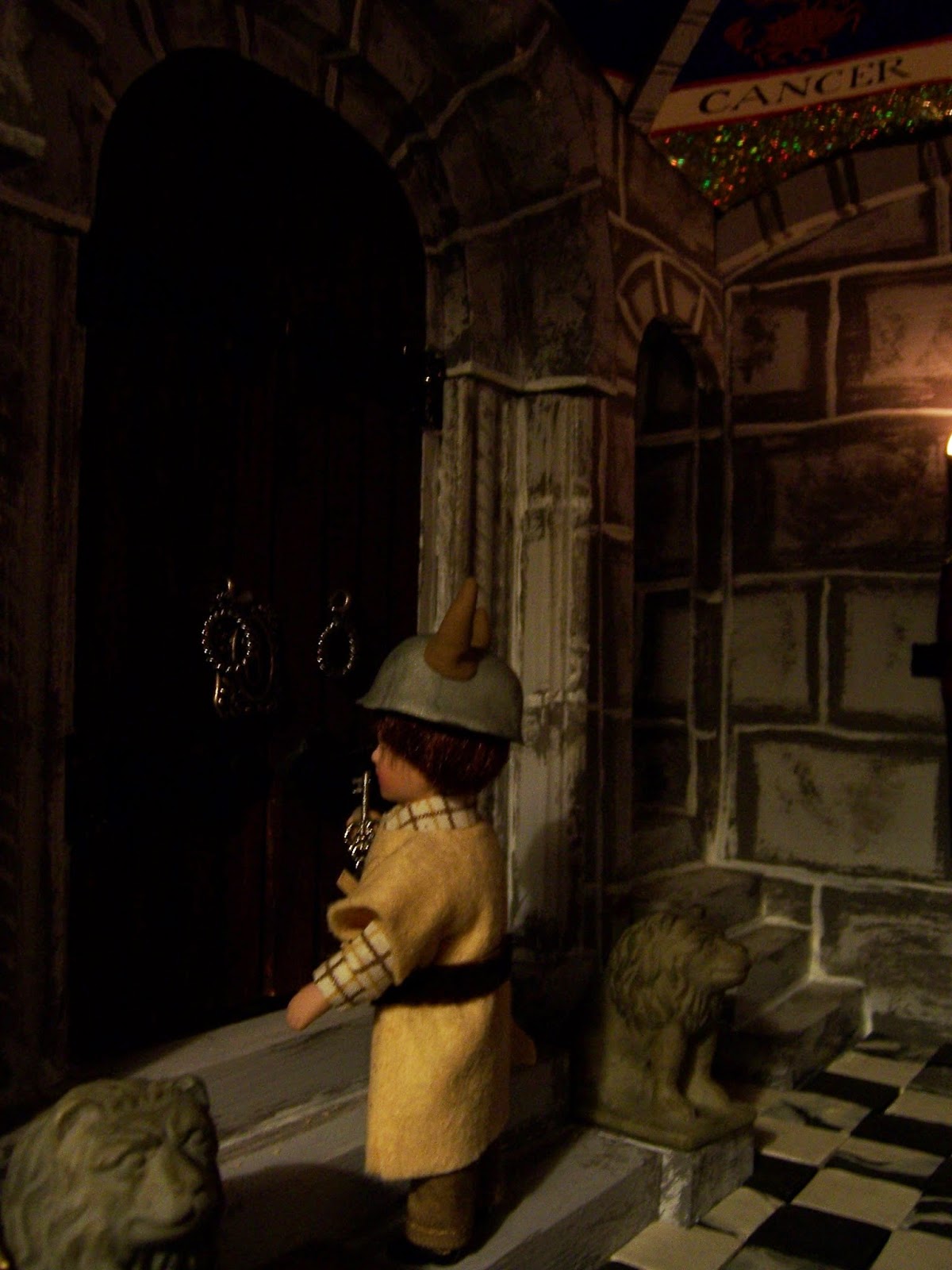 Once again, he tried the key in the ancient lock.
And again, it turned easily,
And the door swung open.

It led him into the Great Hall. 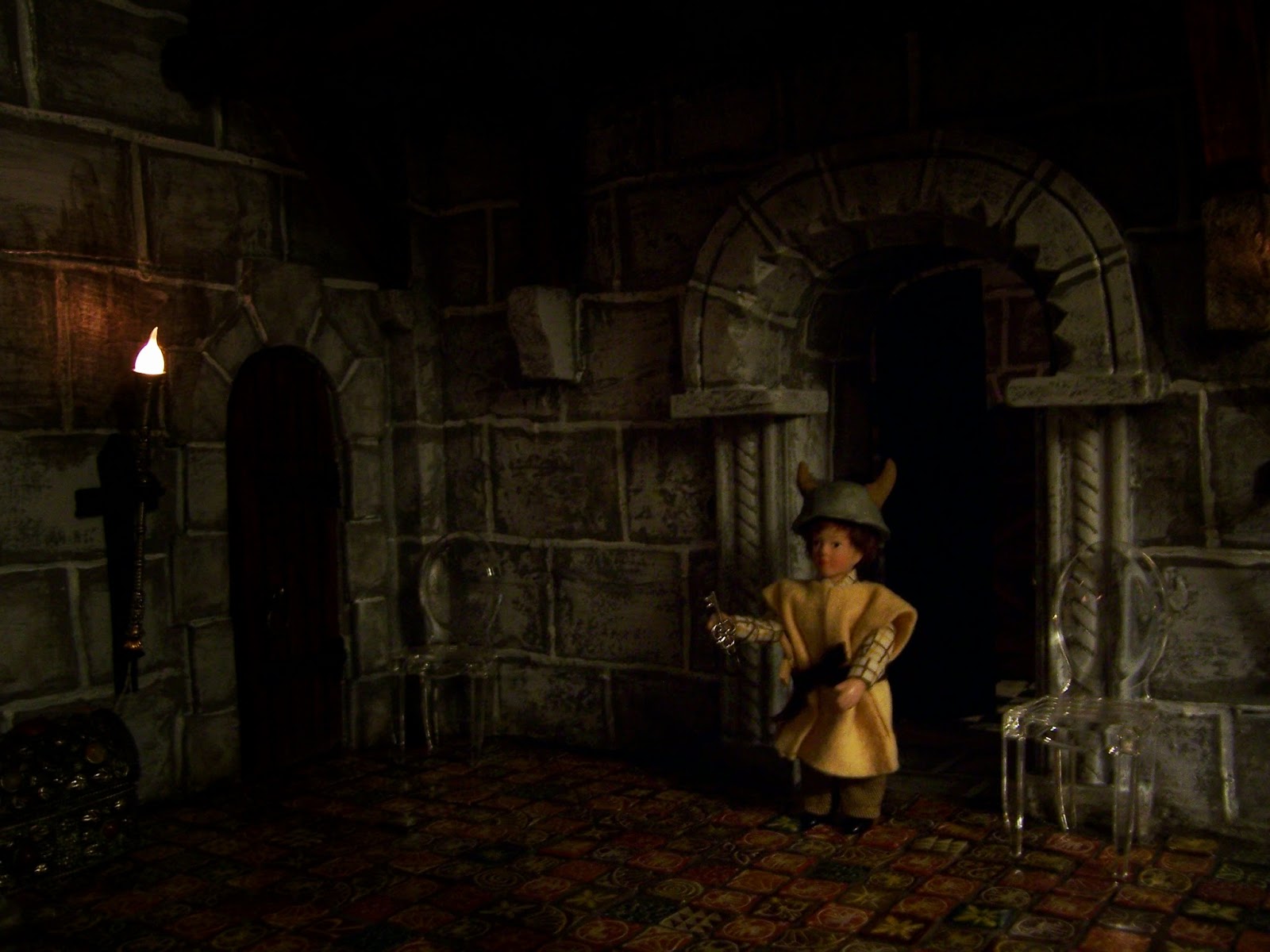 It, too, was deserted, although the torches were still lit.
There were many doors in this Hall, but one on the other end stood open.
He crossed to it, but thought he should try the key in the lock first....
Just to be sure.... 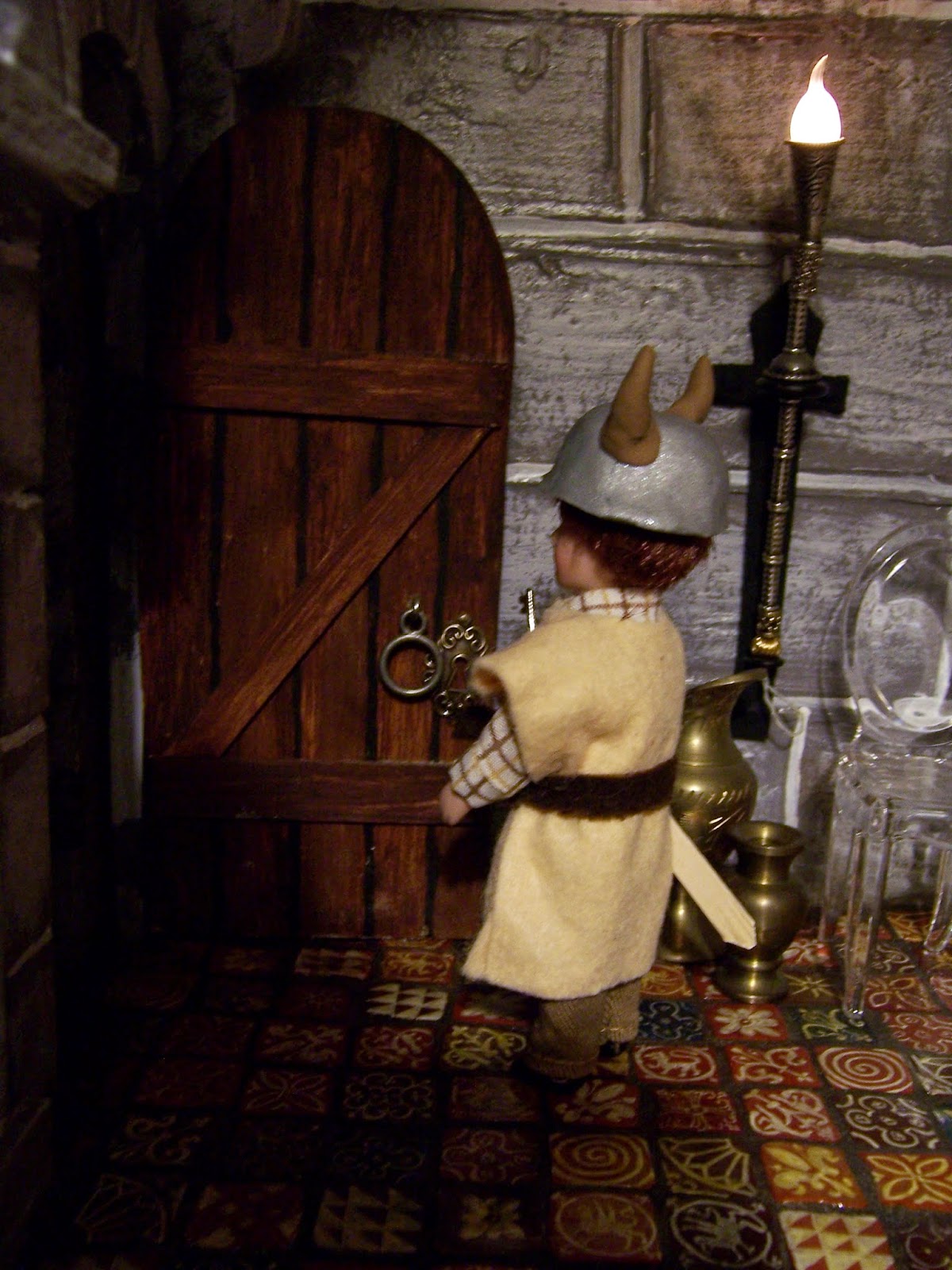 It turned easily. So he passed through.
It took him down a narrow stairway to the cellars. 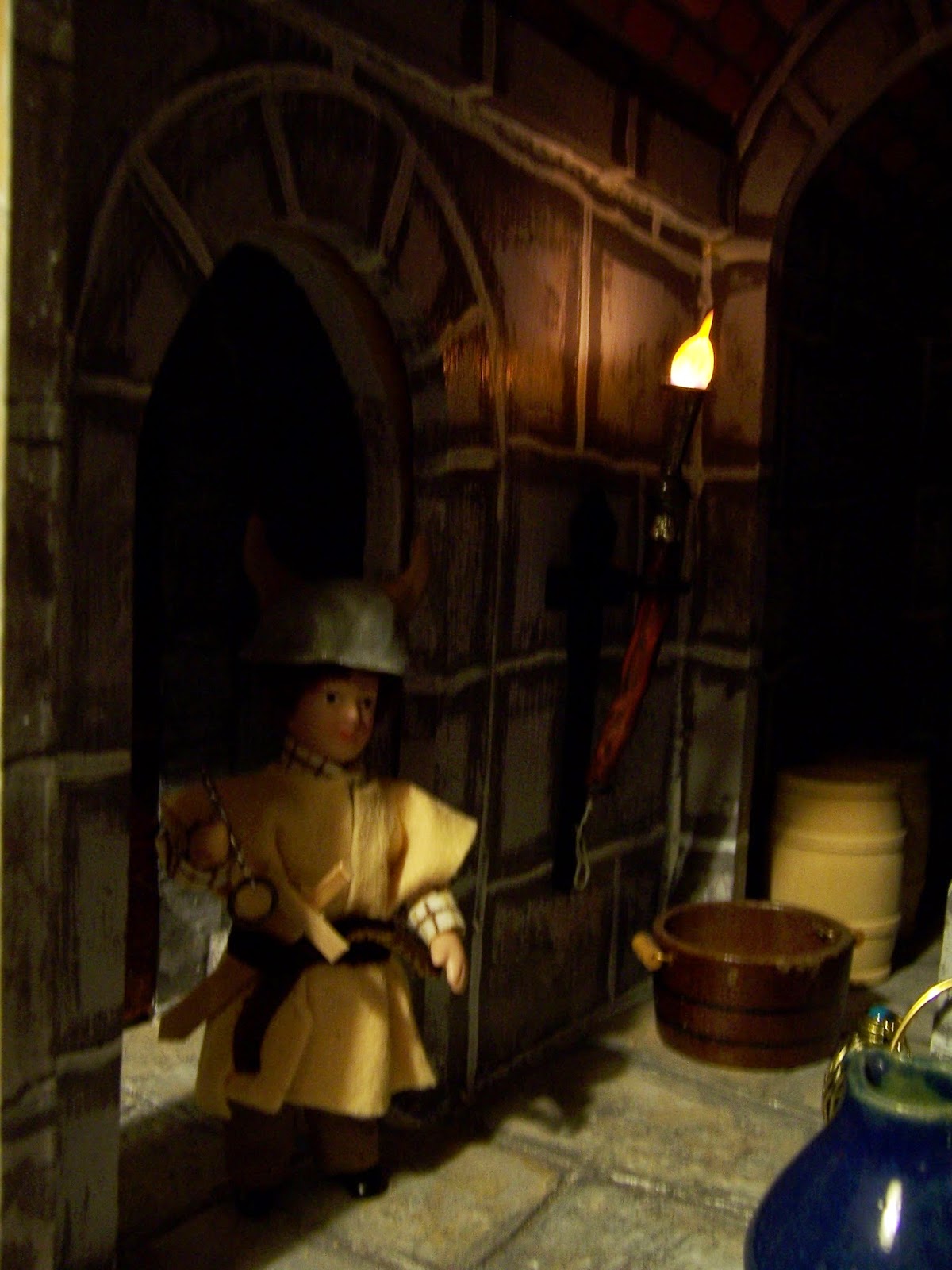 It, too, turned smoothly and the door opened.
It led into the old kitchens. 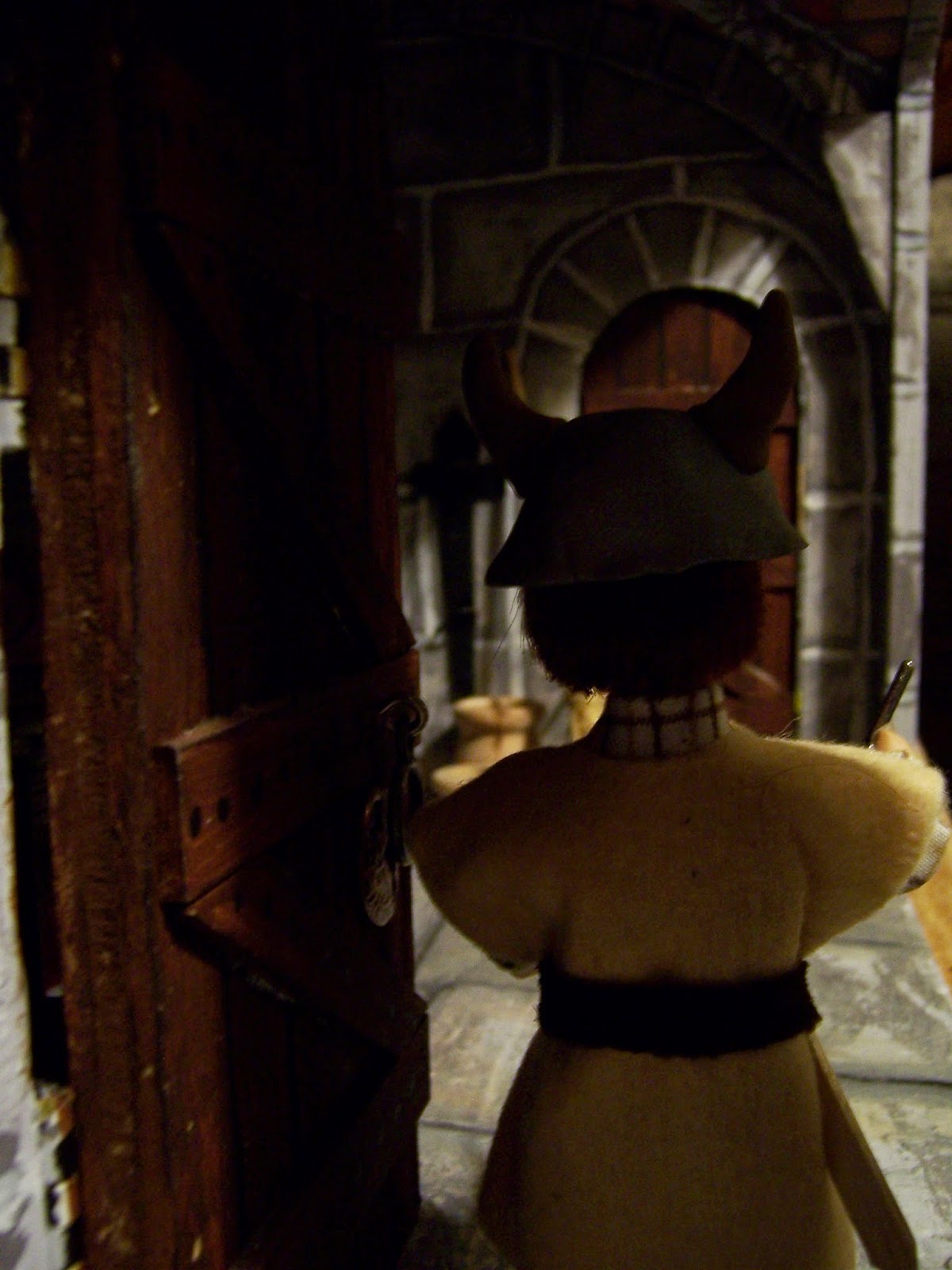 They too, were empty!
Perry began to wonder whether his sisters were here at all!
Perhaps the Wizard had been mistaken....
but he would keep looking.

There was another door at the bottom of the stairs.

It was closed, but it had no lock on the door.
Perry reached for the handle and the door swung open.... 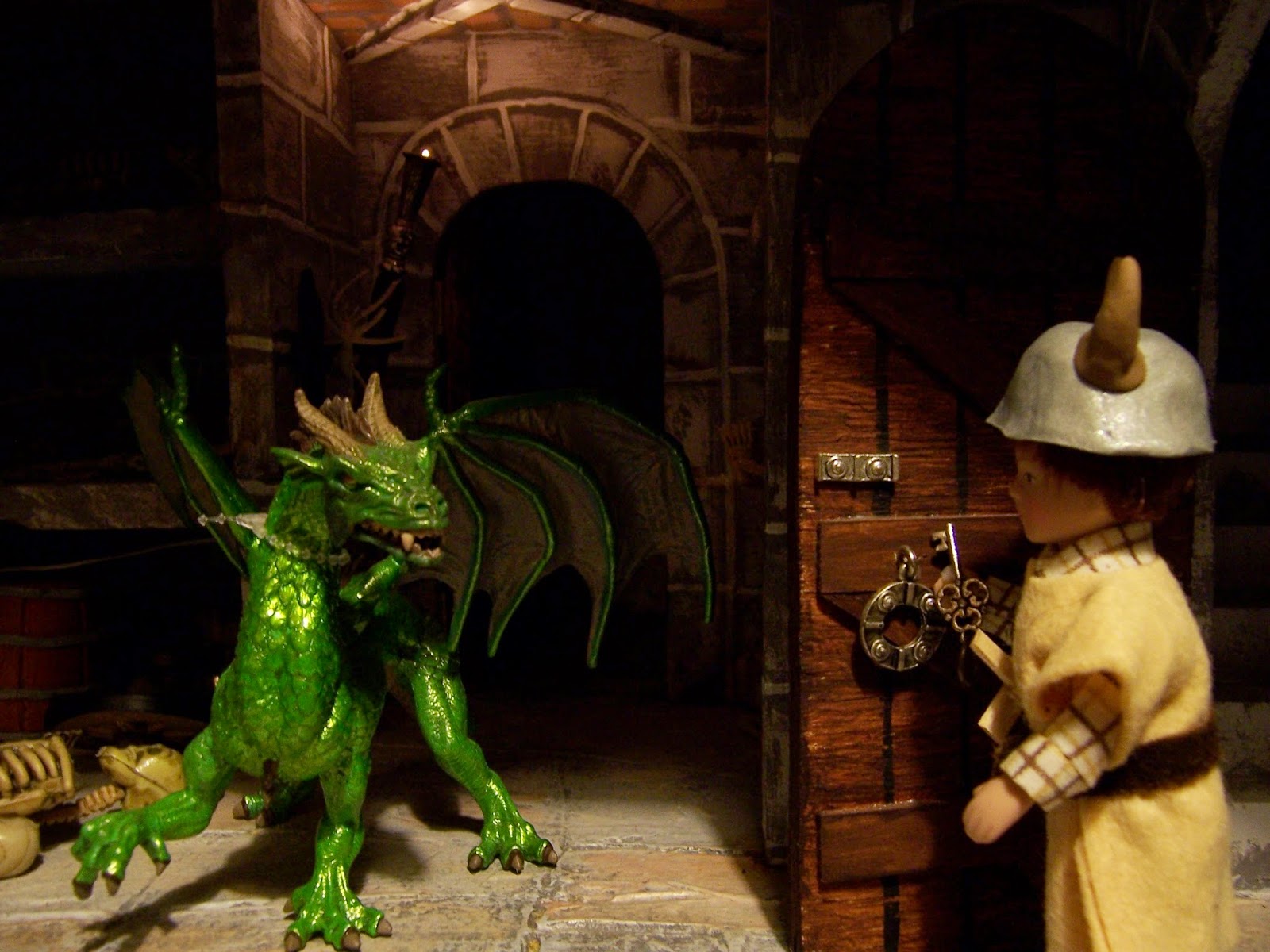 He leaned in and looked around the door.....
And came face to face with a young Dragon!
He was only startled for a moment,
and then he thought that if there was a Wizard in this Castle,
then he should not be surprised to see Dragons too! 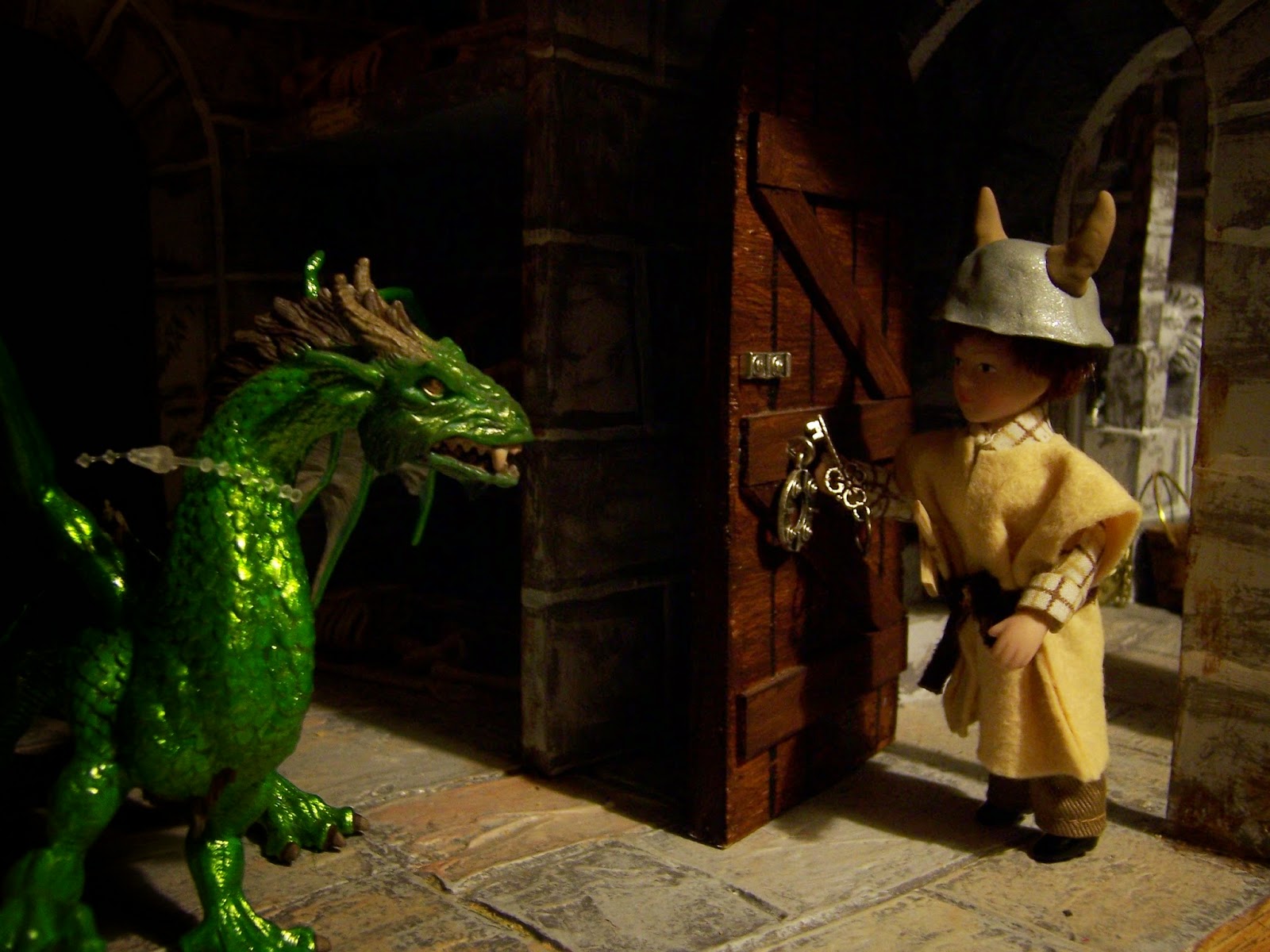 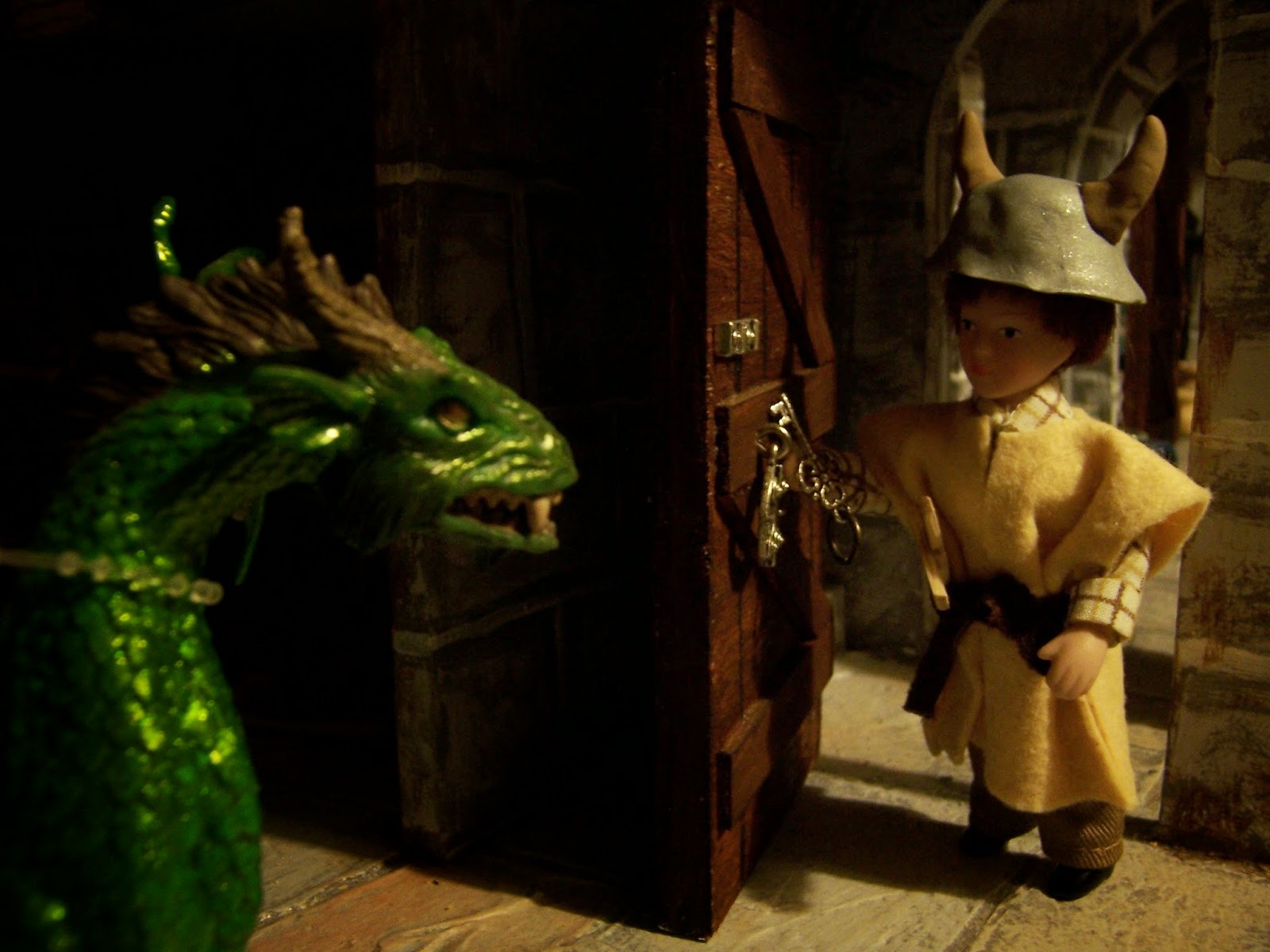 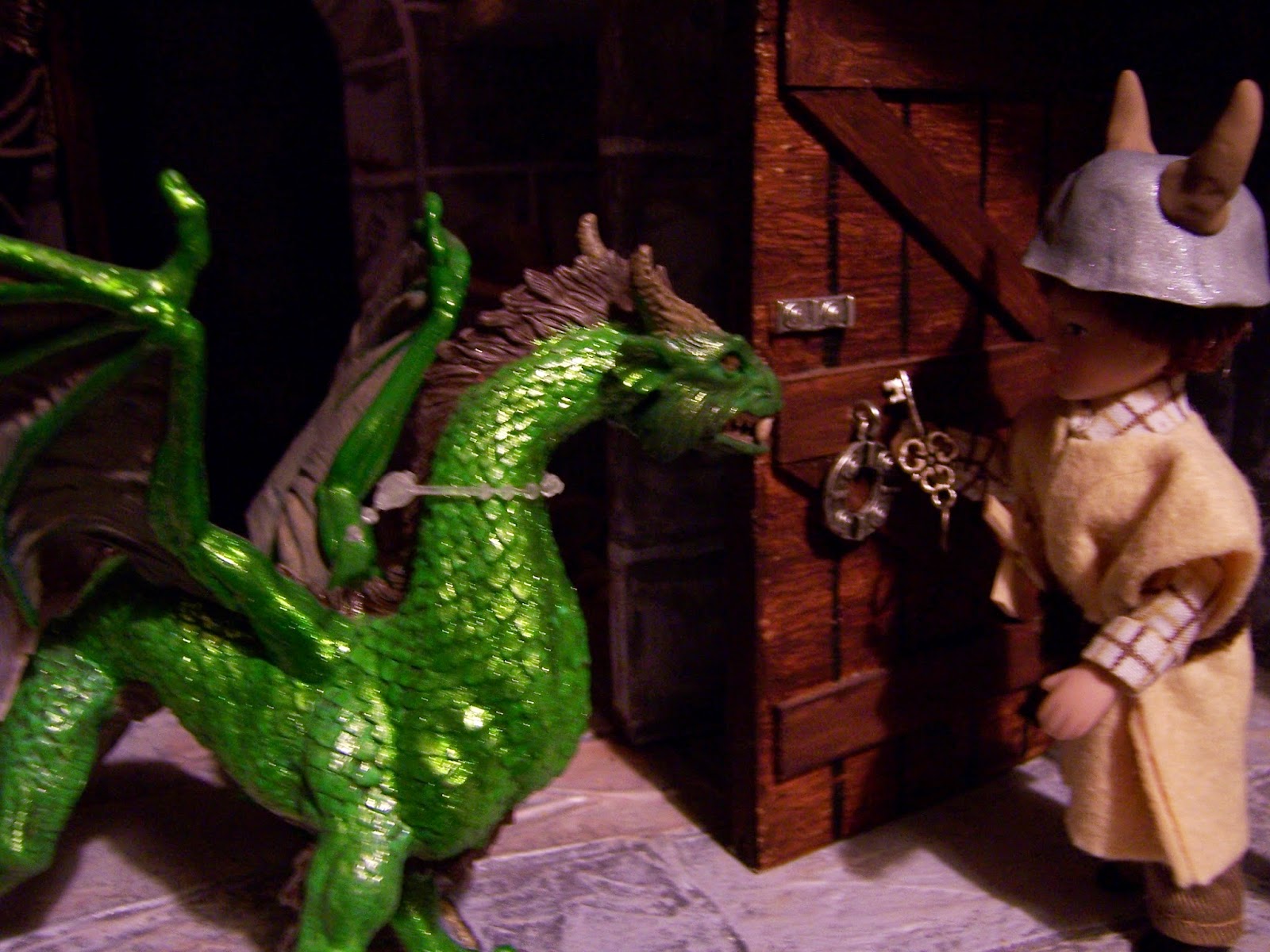 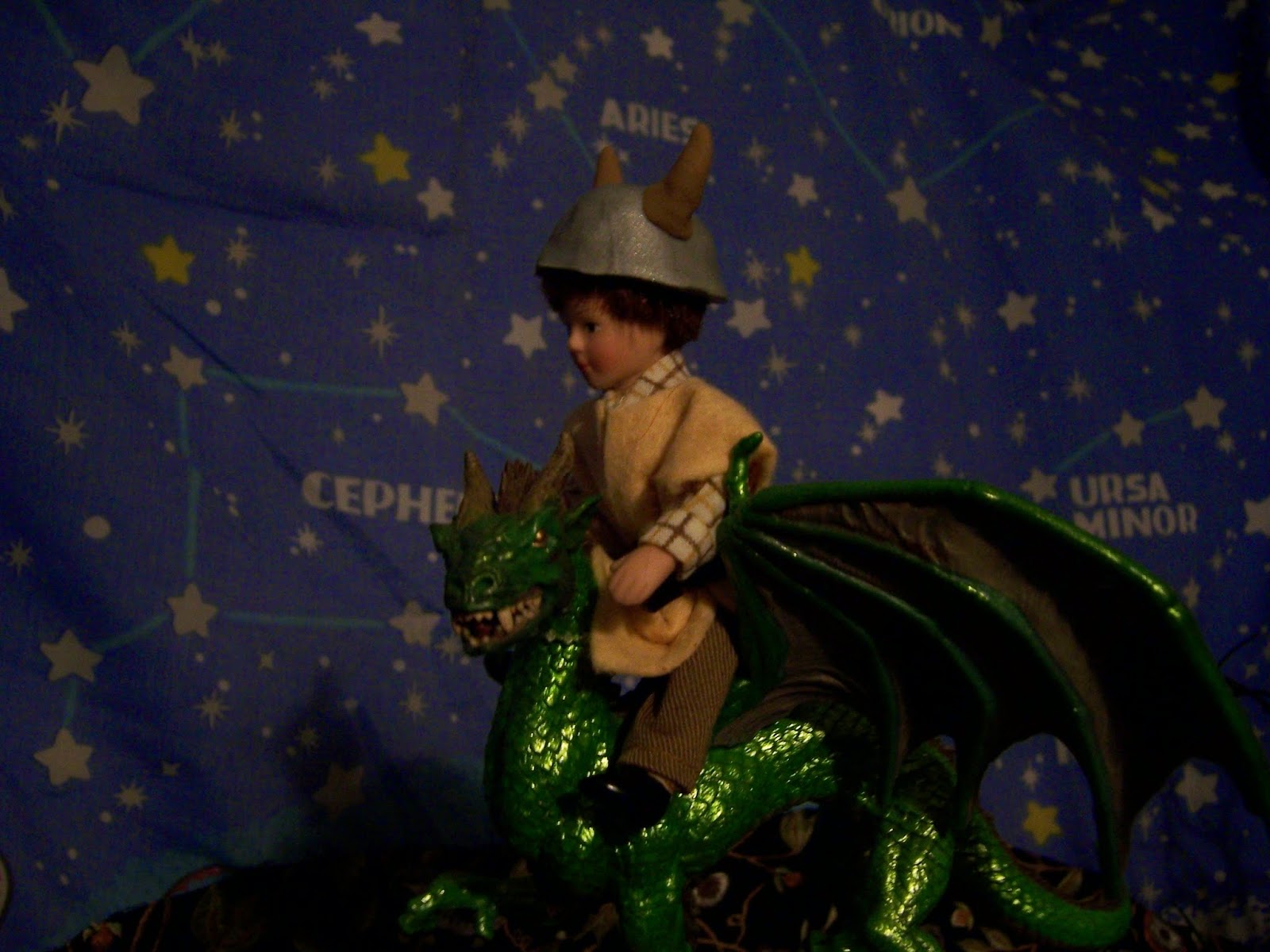 The wind whistled in his ears, and it was cold.
But Perry thought it was very exciting! 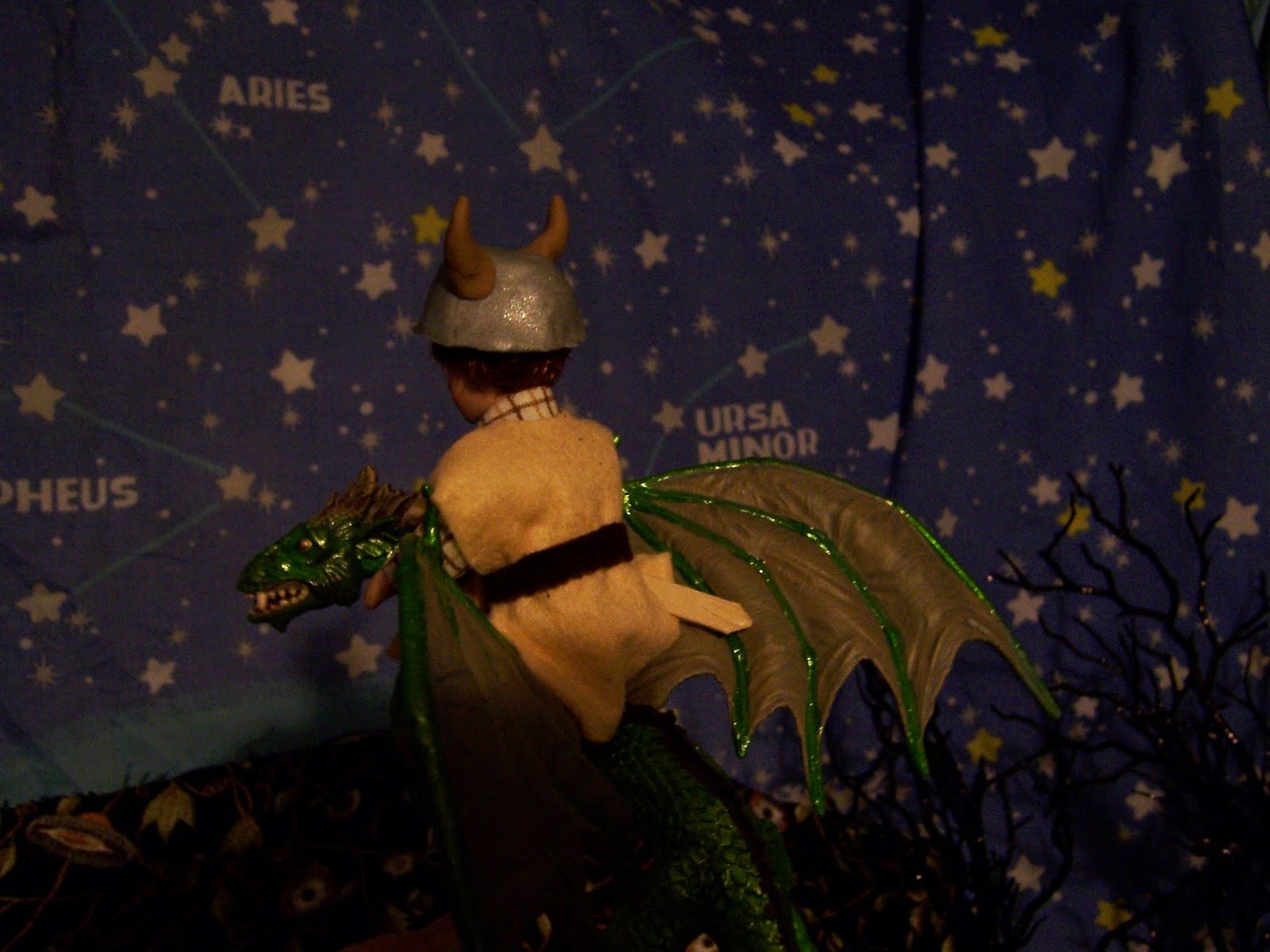 Until suddenly the Dragon plunged toward the Earth..... 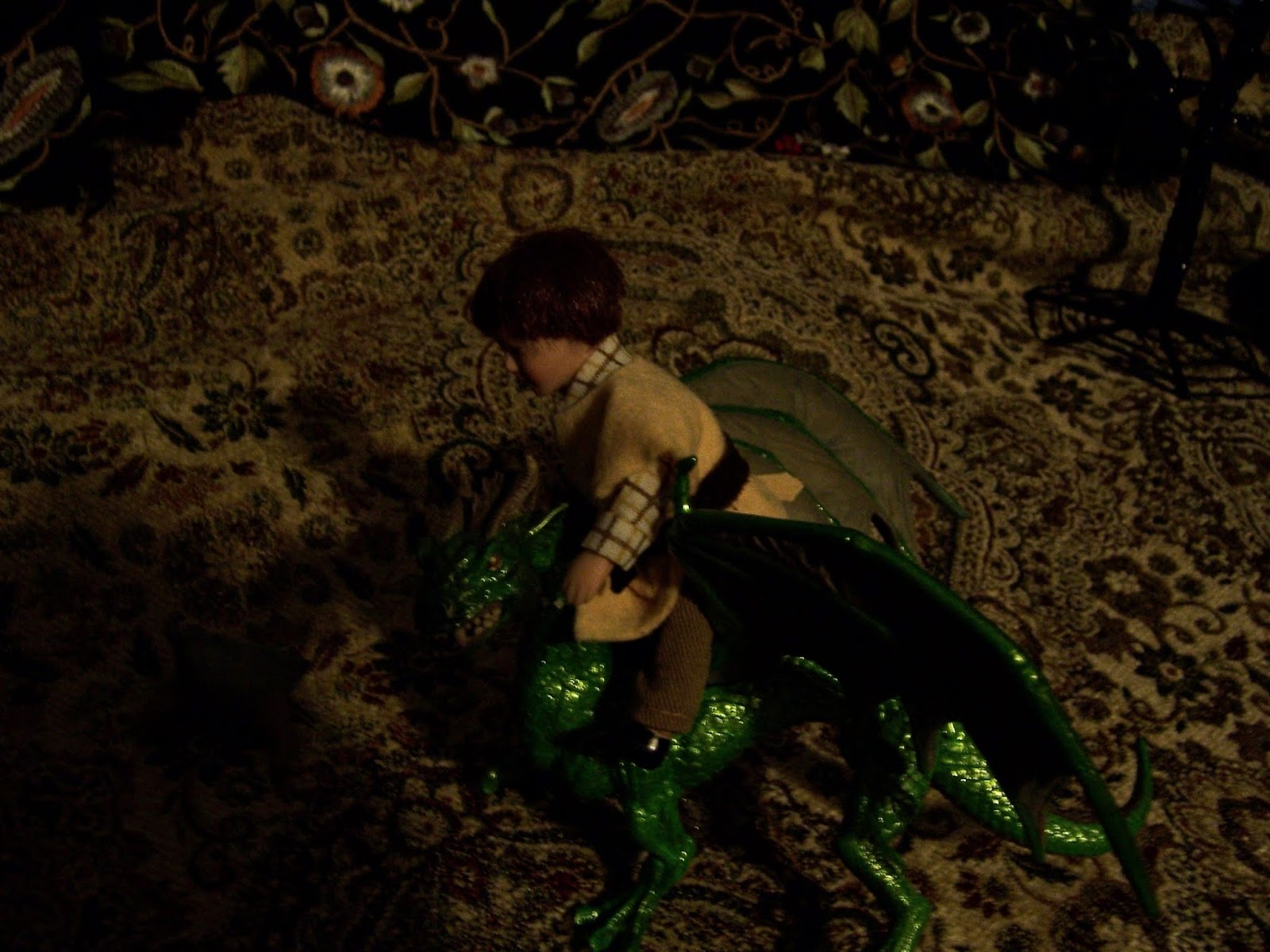 And landed with such a jolt.... 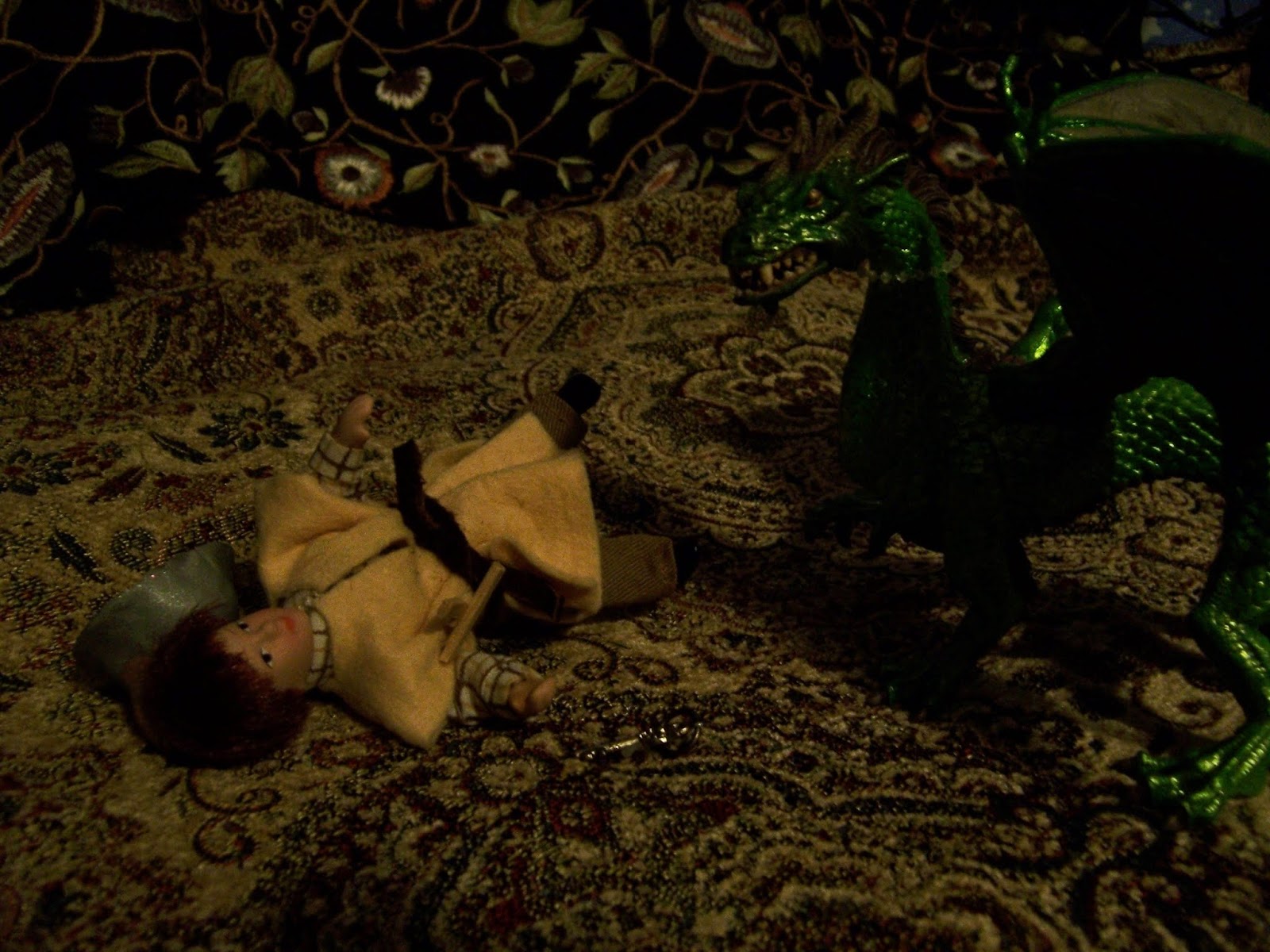 He was thrown to the ground where he hit his head rather hard,
and all the breath was knocked out of him! 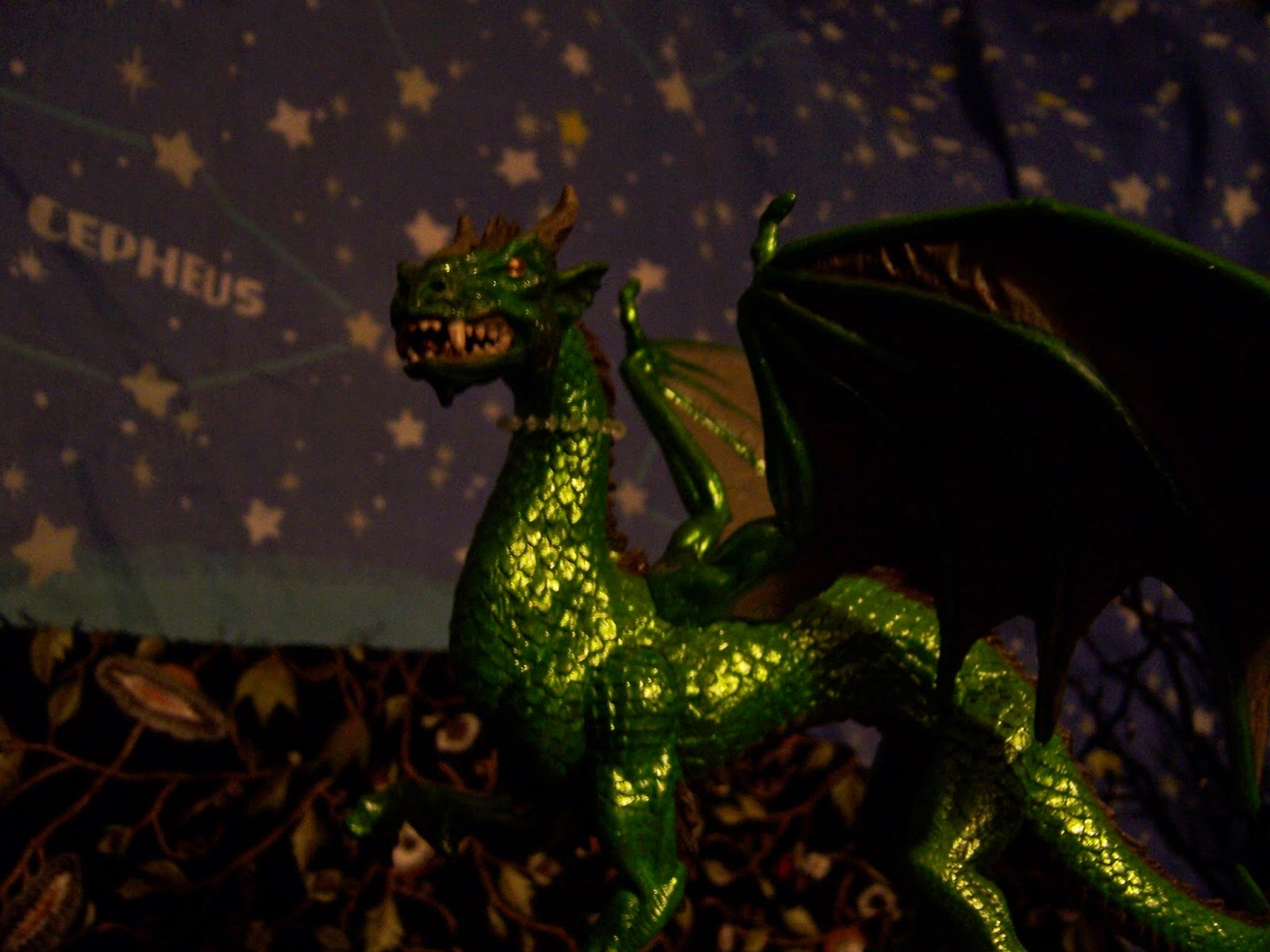 Then the Dragon hissed "I think I will find the Princesses for myself......"
and he flew away into the night and left Perry behind!

He did not lie there for long before he heard
the sound of thundering hooves on the ground,
and suddenly a horse and rider raced over the hill. 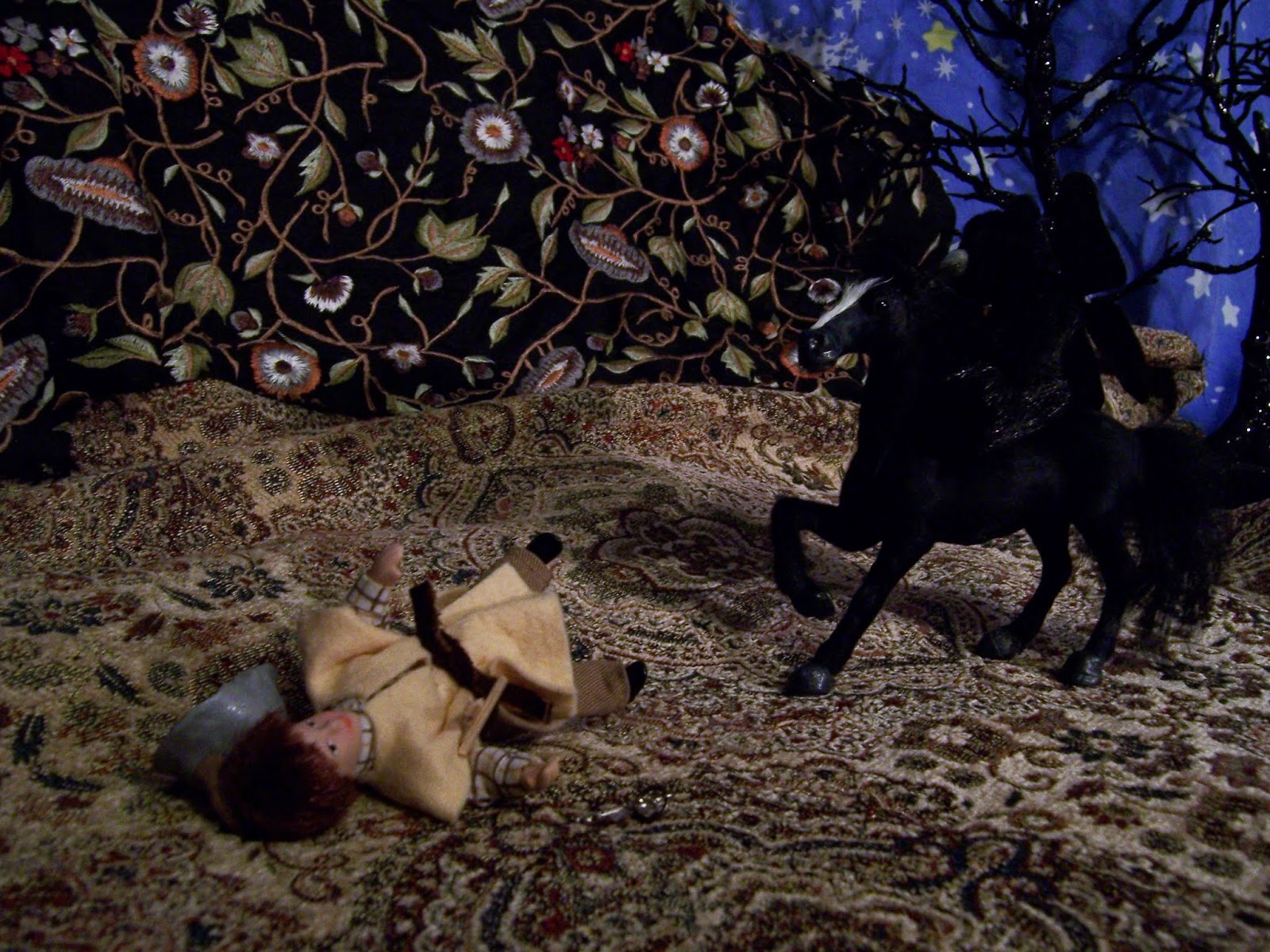 Before Perry could even catch his breath,
a Great Black Warrior Bear was standing beside him. 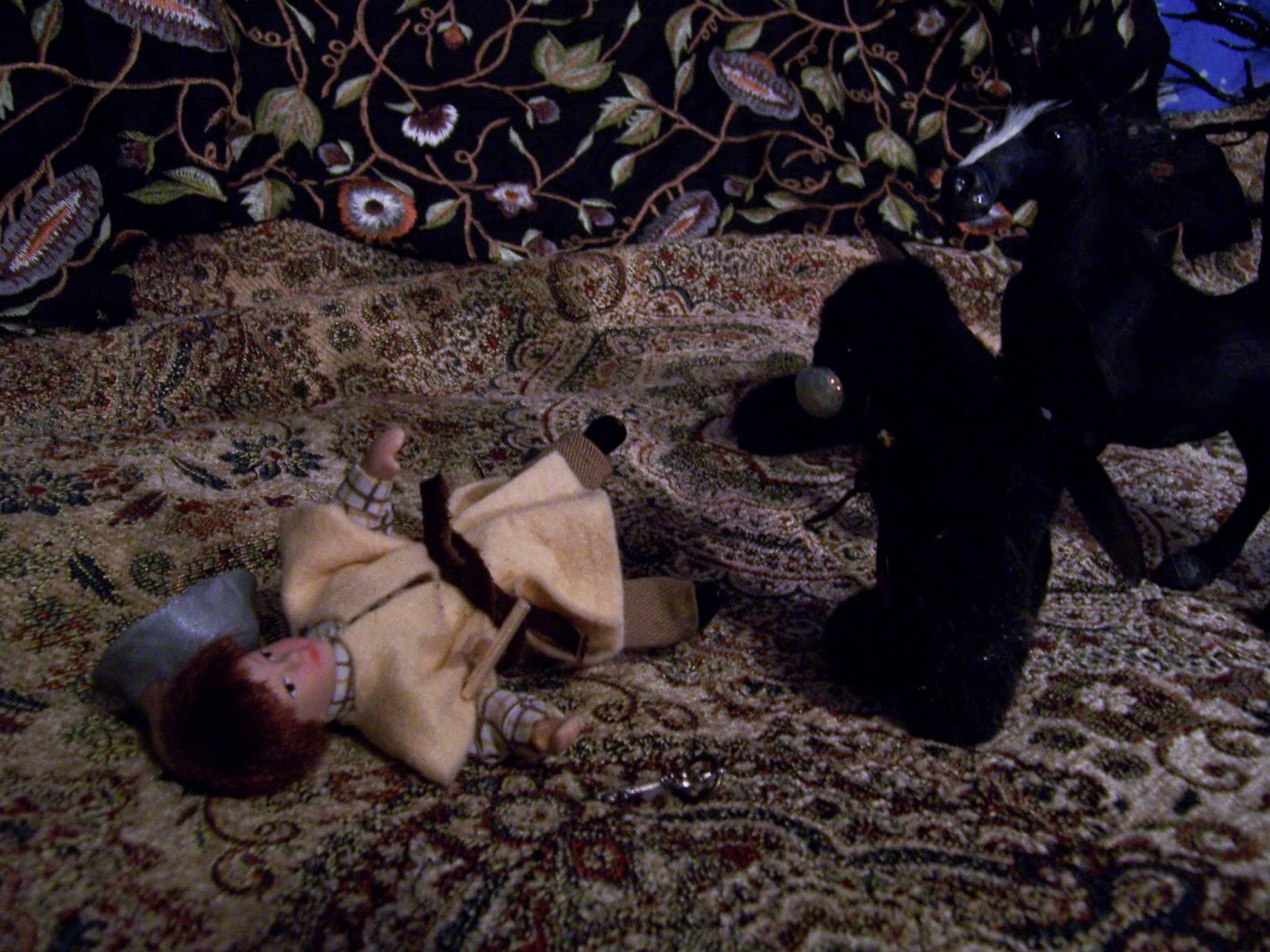 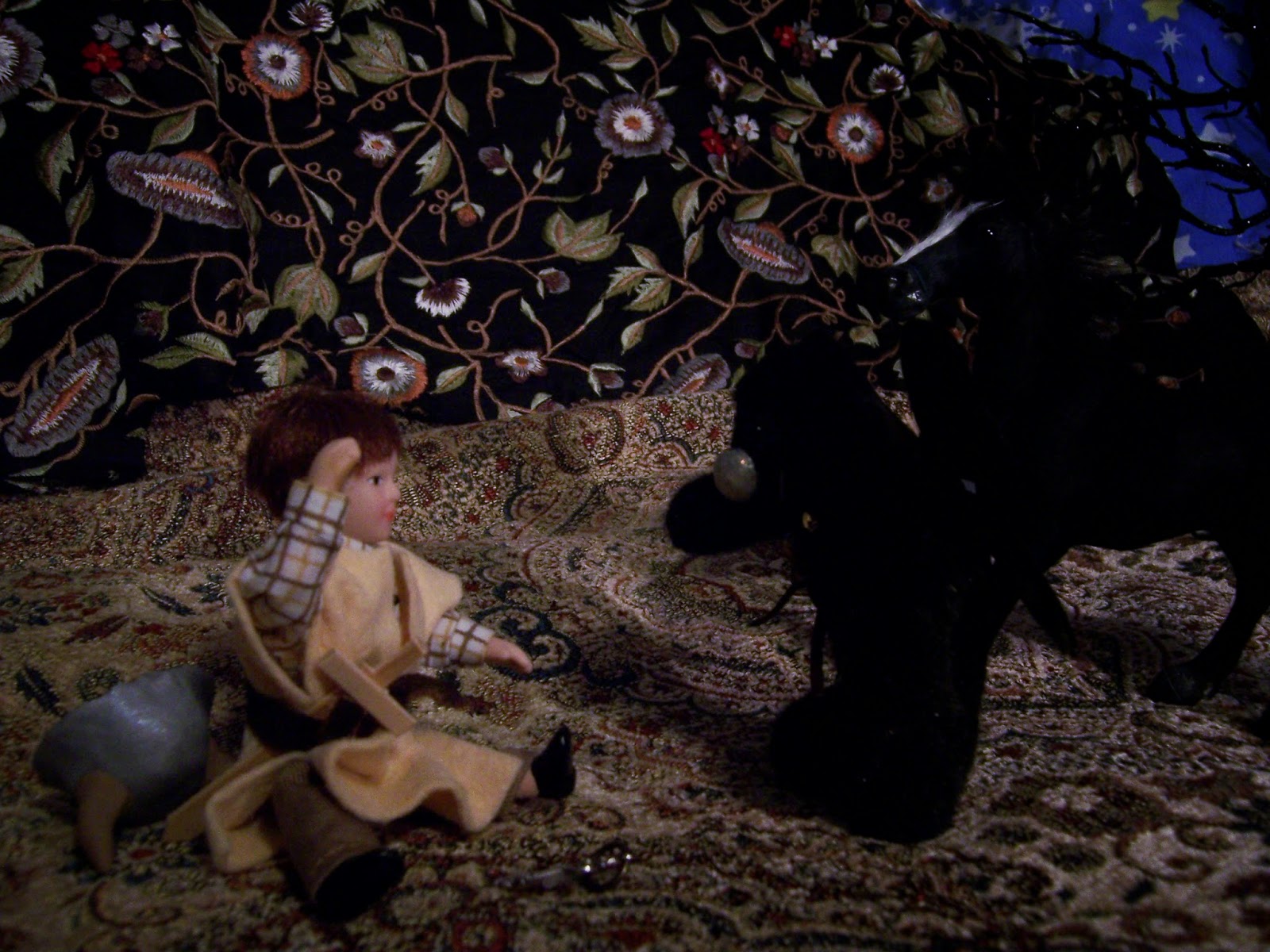 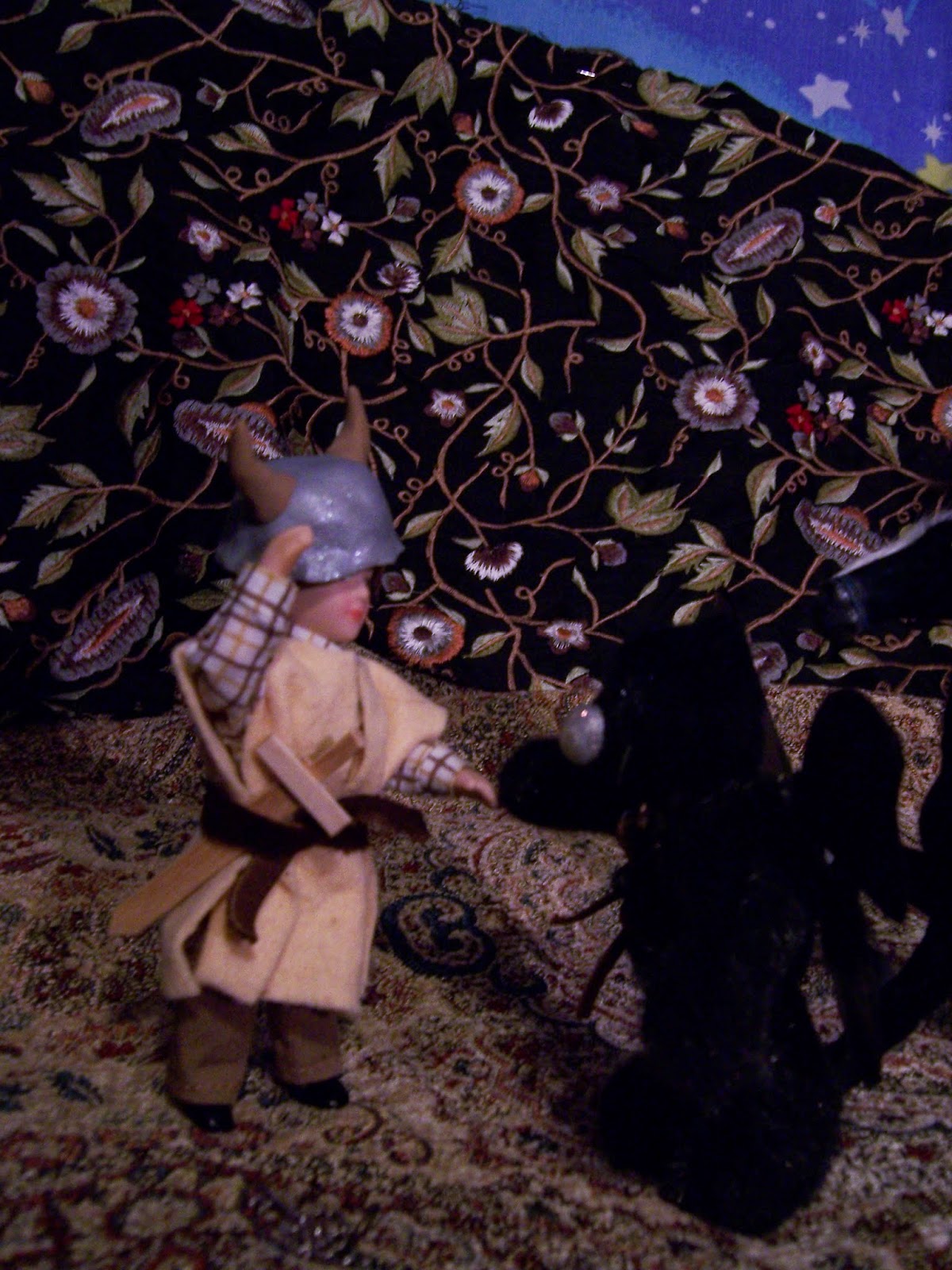 "We were looking for my sisters, the Princesses..." added Perry.
"The Wizard said I would find them in the Castle,
but they weren't there," he explained.
"Then the Dragon said he would help me find them.....
if I let him out of the dungeon, " added Perry.
But suddenly he wasn't so sure the Dragon had meant to help him after all.
"Well, perhaps I can help you find them..." said Sir Orion.
"At least I know someone who is sure to help you..." he explained.
"But you will have to climb onto my back...
it will take a bit more flying to get there," he added. 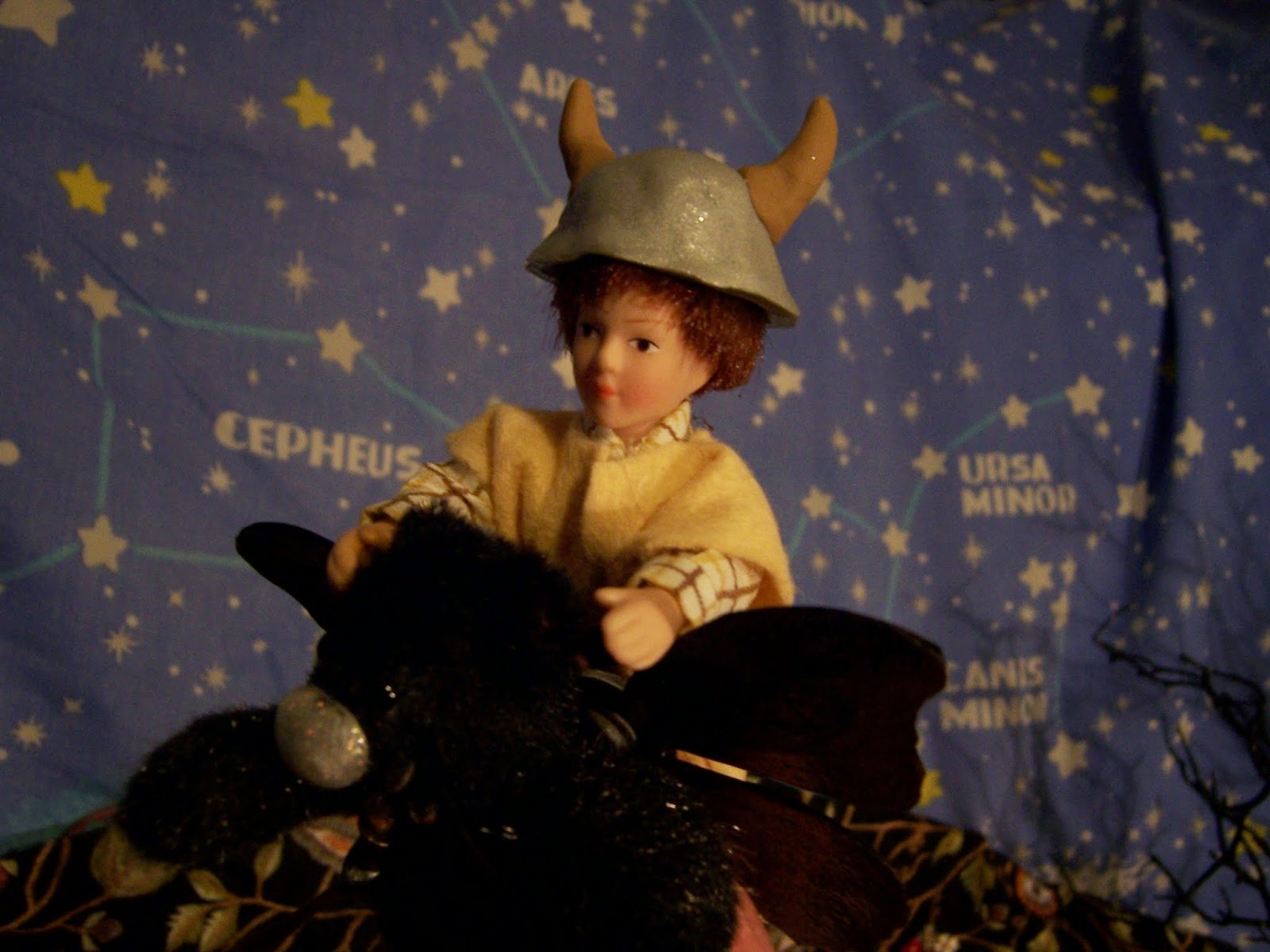 So Perry climbed onto Sir Orion's back.
And before he knew it, they were flying up into the sky! 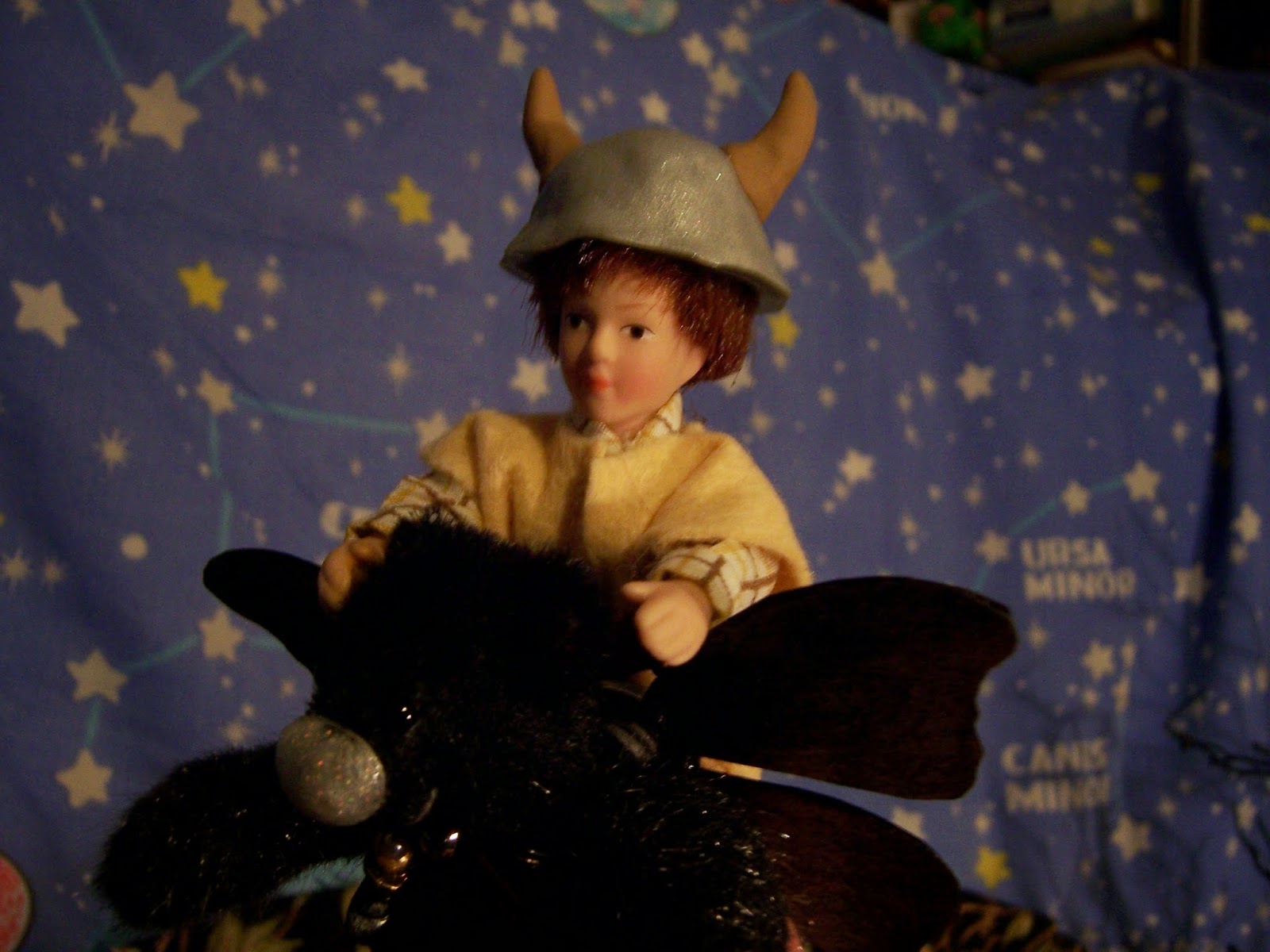 They went much higher and farther than the Dragon had flown!
And at last they landed high up in the clouds at The Cloud Palace. 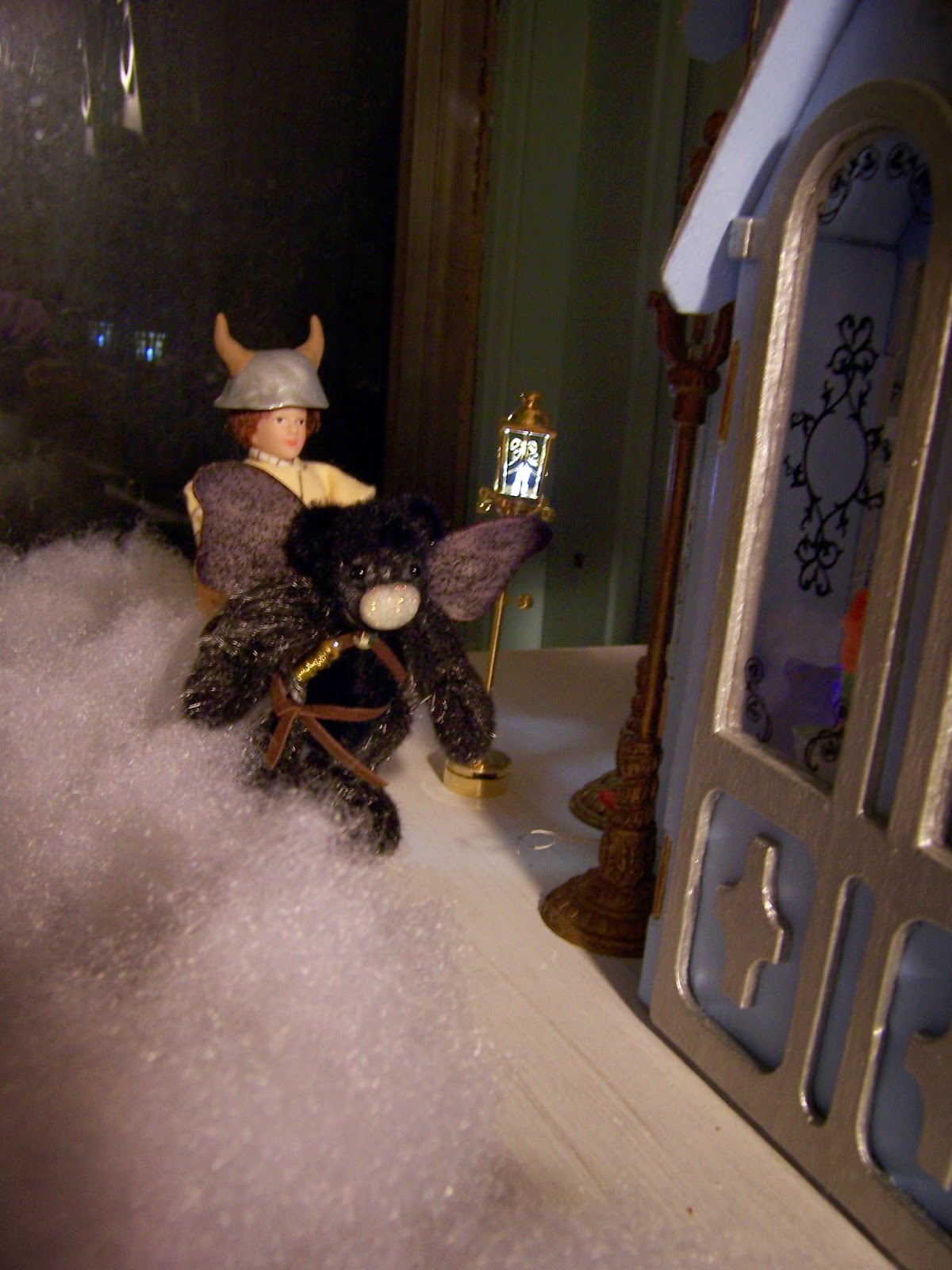 Sir Orion was very happy to be able to set his passenger down!
But he was not going to admit how tiring it had been to carry Perry.
He took him straight into the Palace to meet Blue, the Blue Fairy Bear. 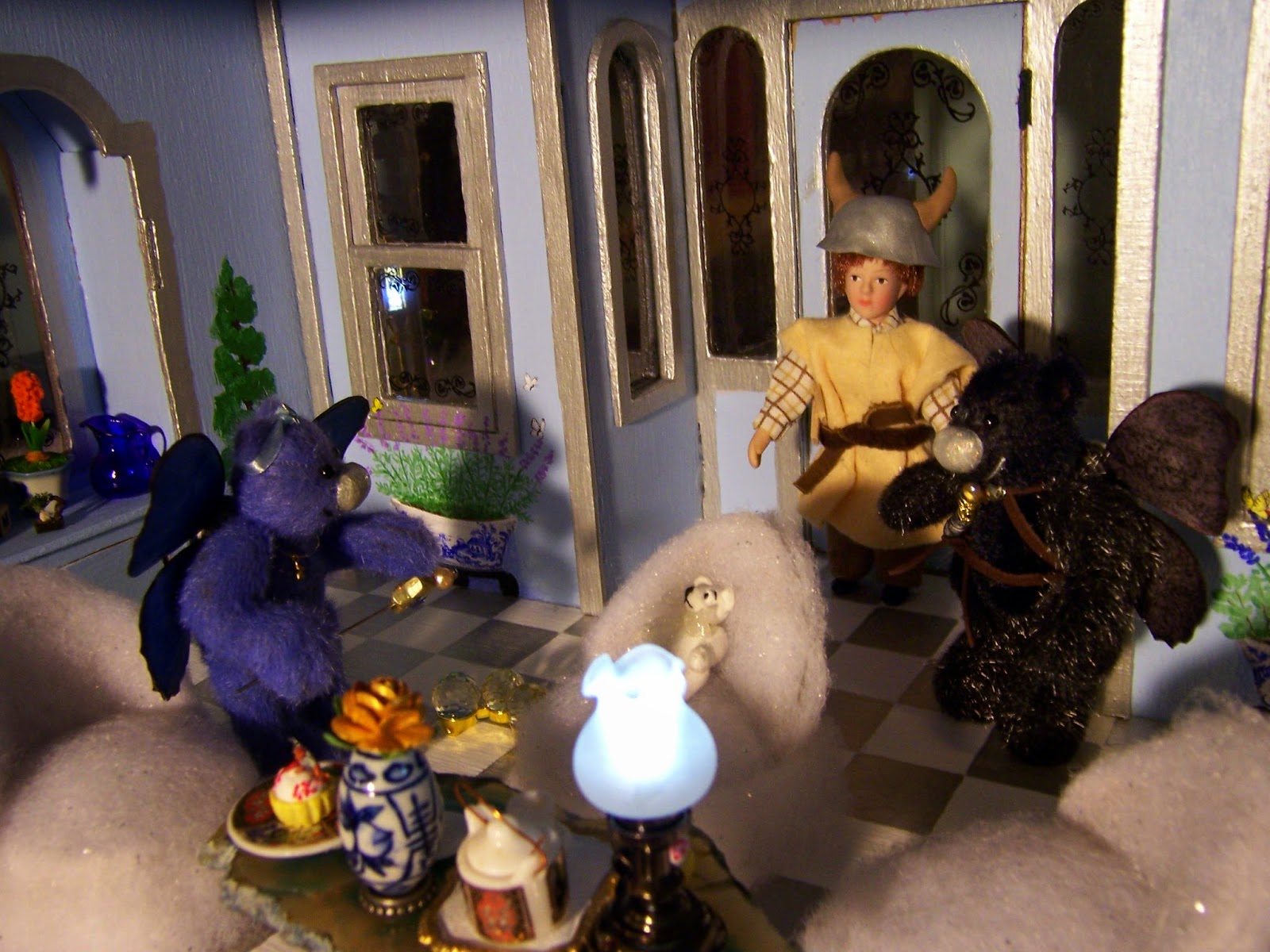 "I have found another lost Traveler," said Sir Orion to Blue. 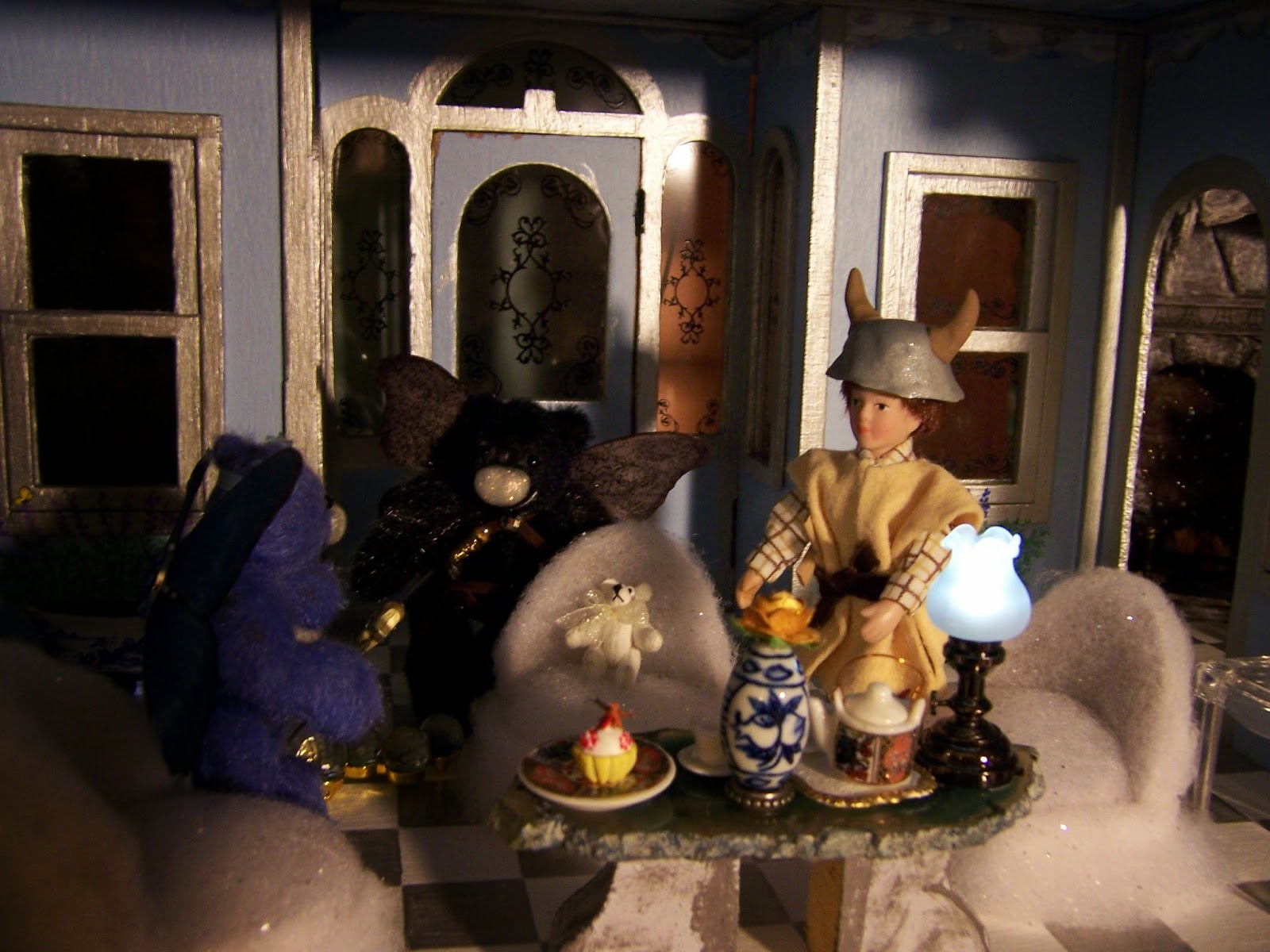 "His name is Peregrine.
And he is searching for his sisters..." added Orion.

Meanwhile, the Dragon had returned to the Wizards Cave.
He had hoped that the Wizard would give him some clue
to the location of the Princesses. 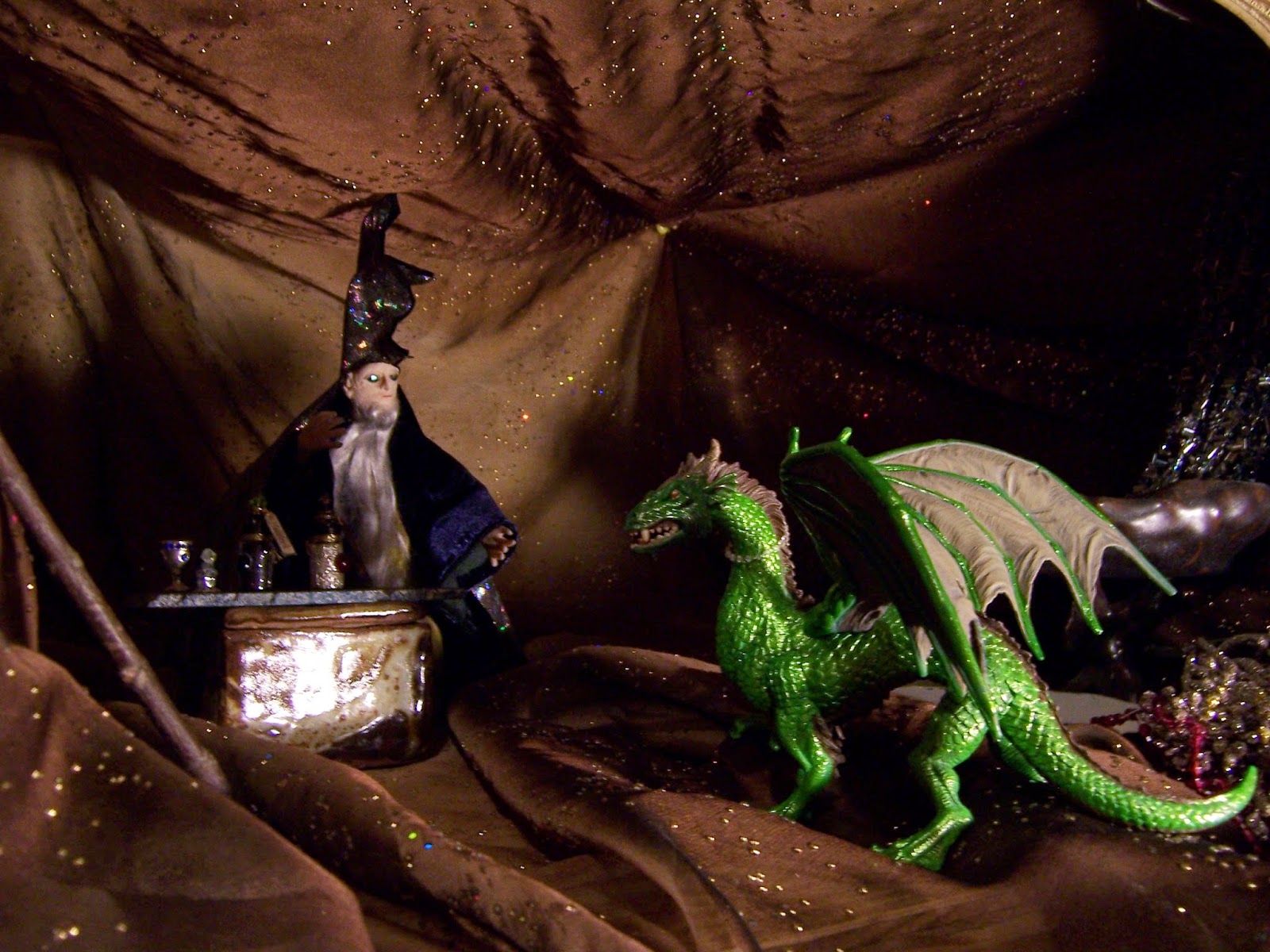 But the Wizard knew that something had gone wrong.
"Slitherwing..." he said "Who let you out of the dungeons?"
"I just want to help find the princesses...." whined Slitherwing.
"What have you done with the boy?" demanded the Wizard.
"He fell......" said Slitherwing, with mock sadness. 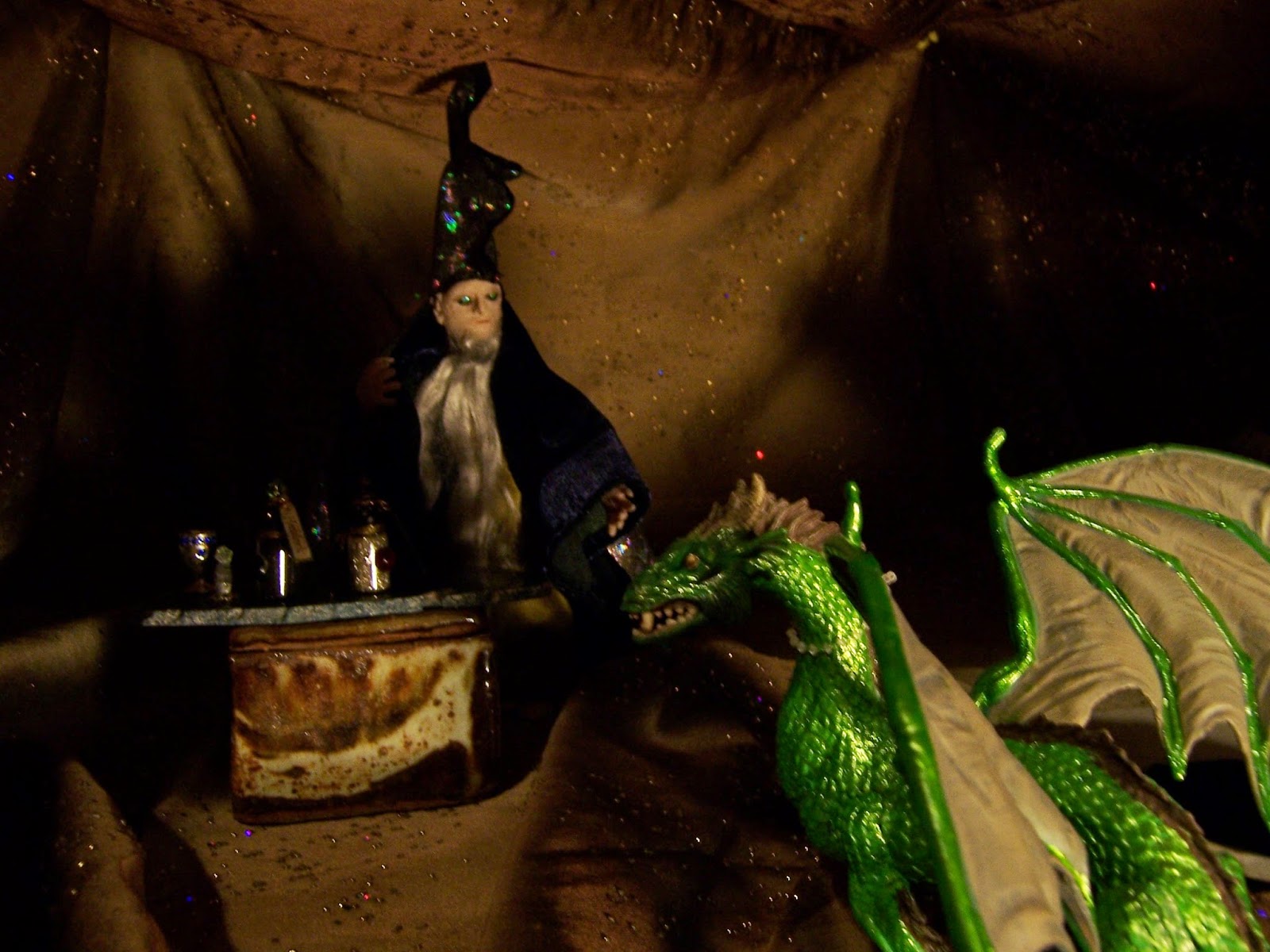 "Begone with you!" ordered the Wizard.
"You have made great mischief this night!"
The Wizard had hoped he would not need to,
but now he knew that he must summon Old Meg! 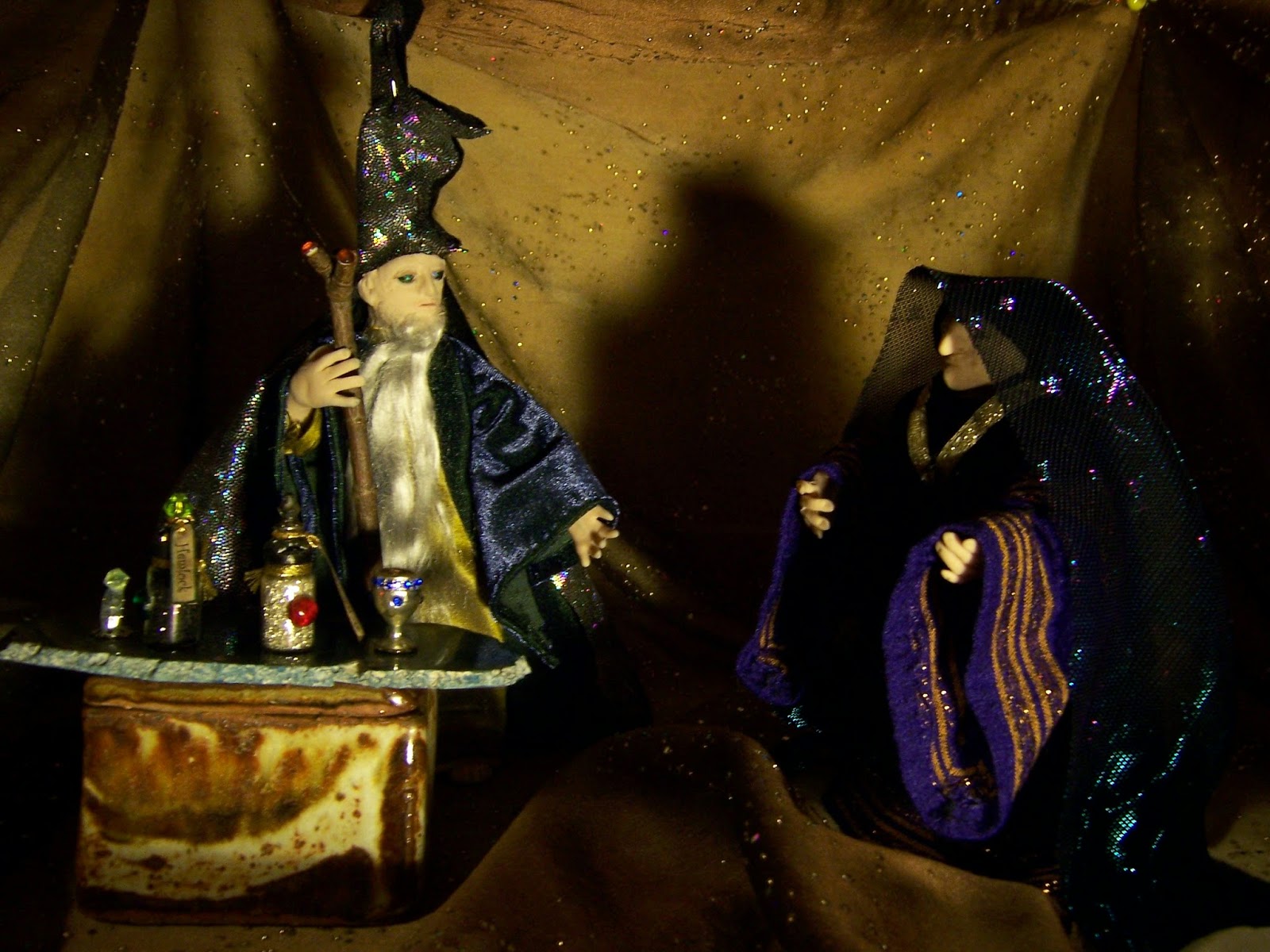 He would need her Wisdom to help untangle Time!