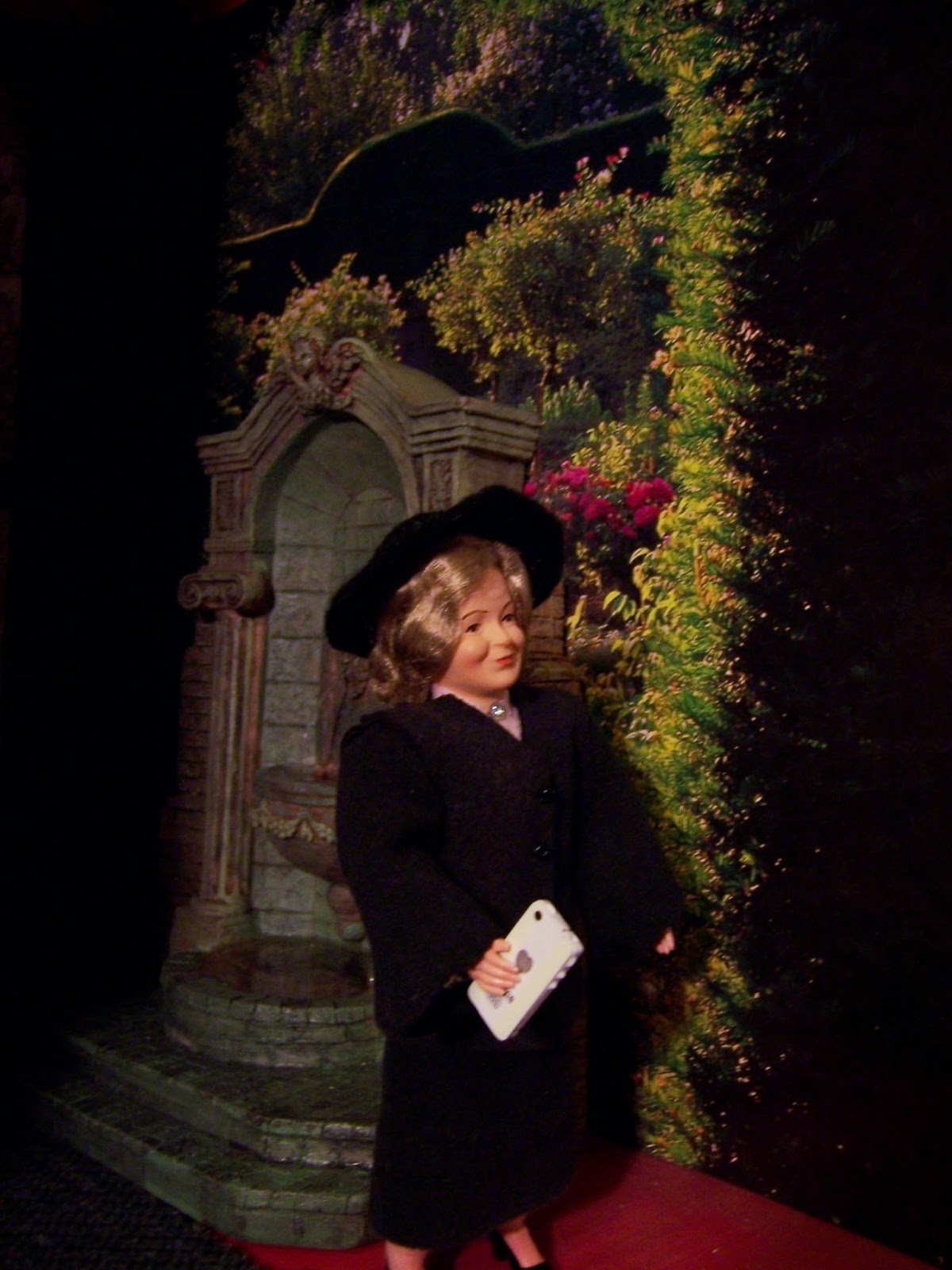 It is only too true, Dear Readers, that we are Never prepared for unsettling news! Whether we like to think we are is another matter. Such was the case with Yvonne. You may recall that we last saw her when she was visiting her cousin Louis Davenant, and he told her the gossip he had been hearing about someone in town making inquiries about the validity of a certain adoption. It sounded too similar to her own situation to be ignored. While she assured him that it could not be the case with her own grandchild, privately she was not so sure. She left shortly thereafter, and was barely beyond earshot before she pulled out her phone and called her Lawyers, Gaston and Raymond du Lac. 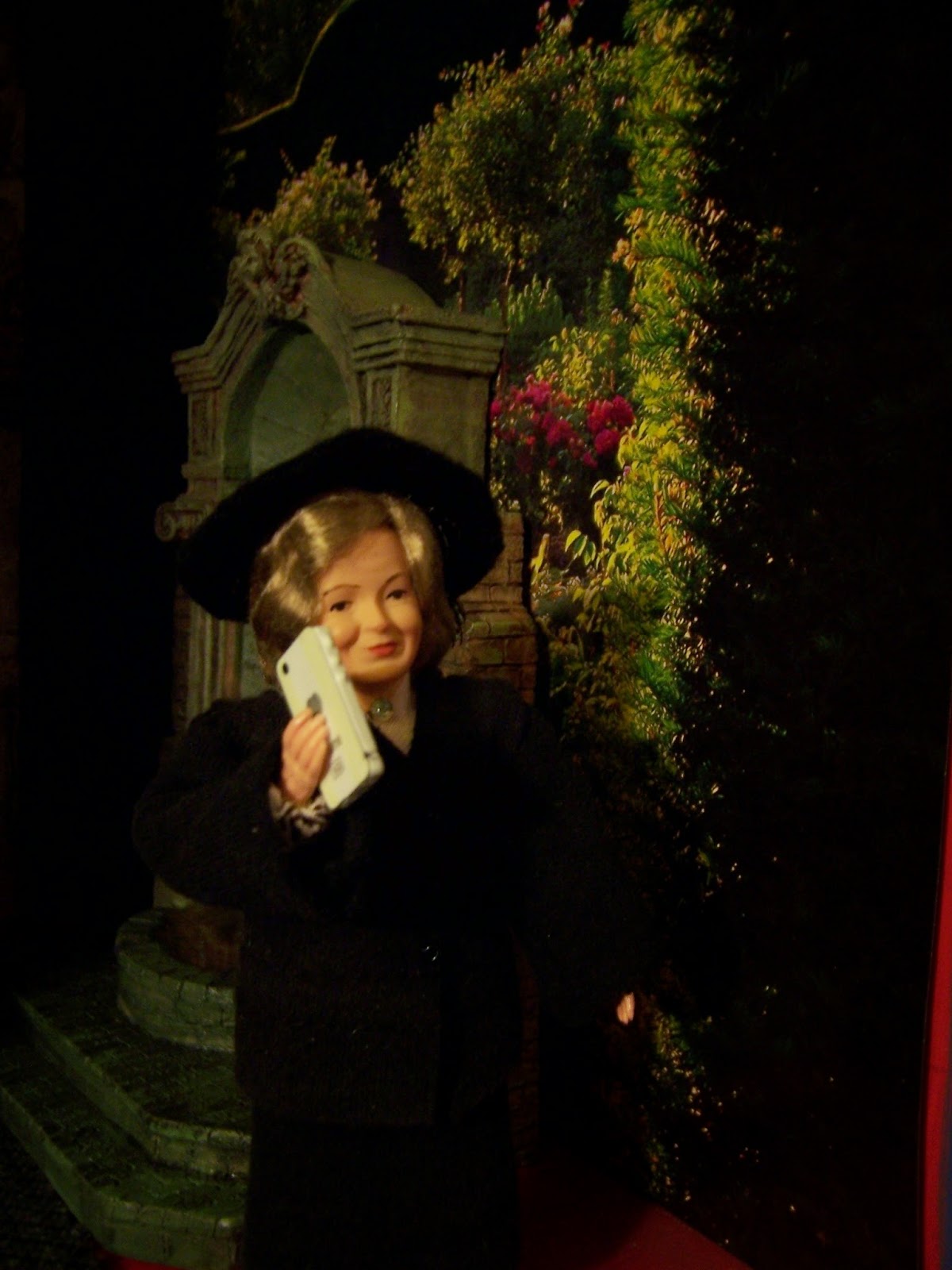 She was suddenly aware that she had never seen the adoption papers herself!
She hadn't wanted to think back to those first few weeks with the child....
That was when Guillaume had suffered his stroke....
and her whole life had been turned upside down!
The lawyers did not answer the phone so she left a message.
She was growing increasingly concerned....
what if it was someone asking about her Grandchild?
What if the papers hadn't been signed? 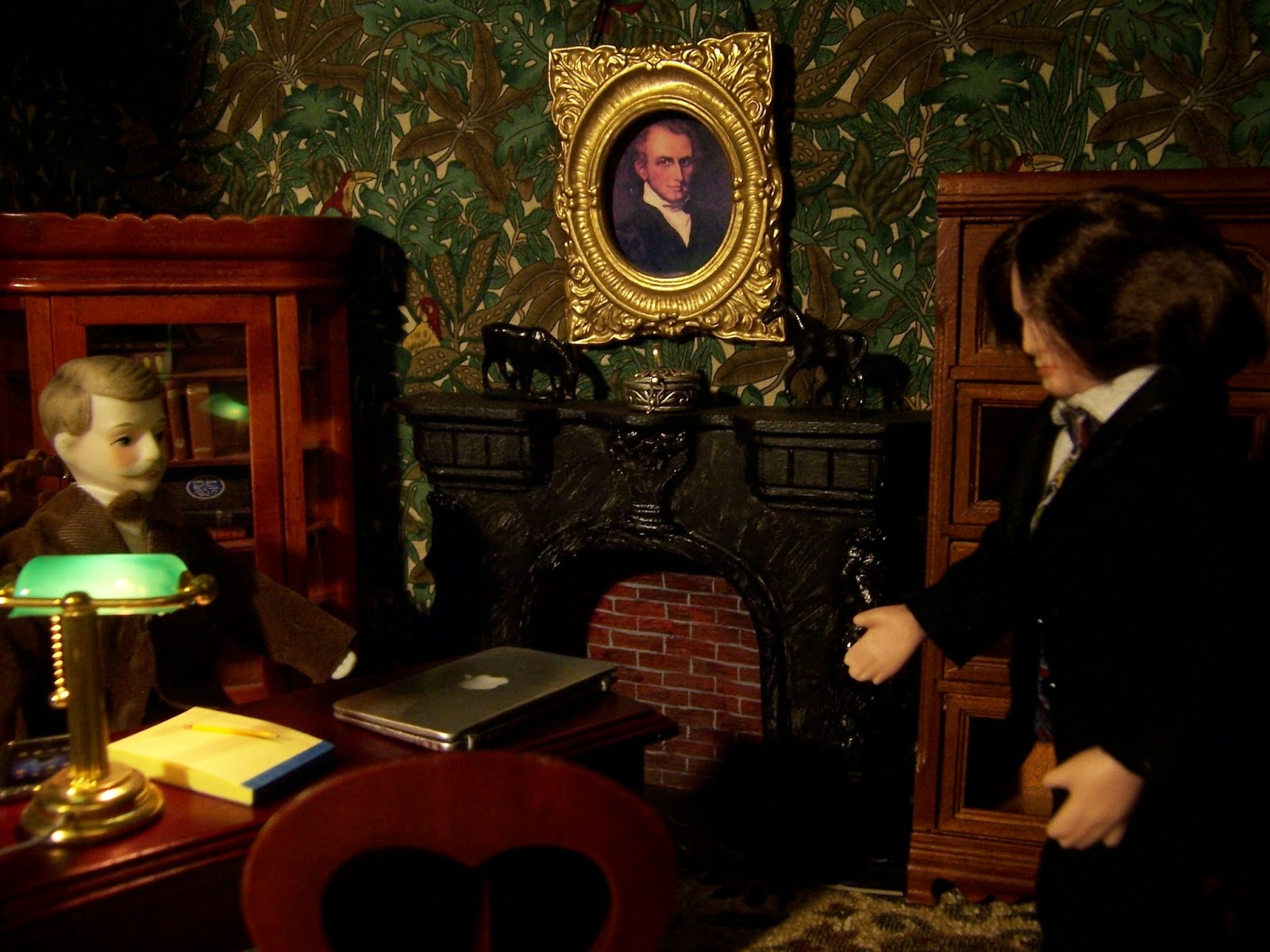 Raymond du Lac retrieved the message a short while later.
He was taken completely by surprise and hurried into his Father's office.
"The adoption papers for Renee..." he blurted out...
"Did you ever get the Mother's signature?"
"There is someone in town making inquiries
and Madame is wanting to be reassured..." he added. 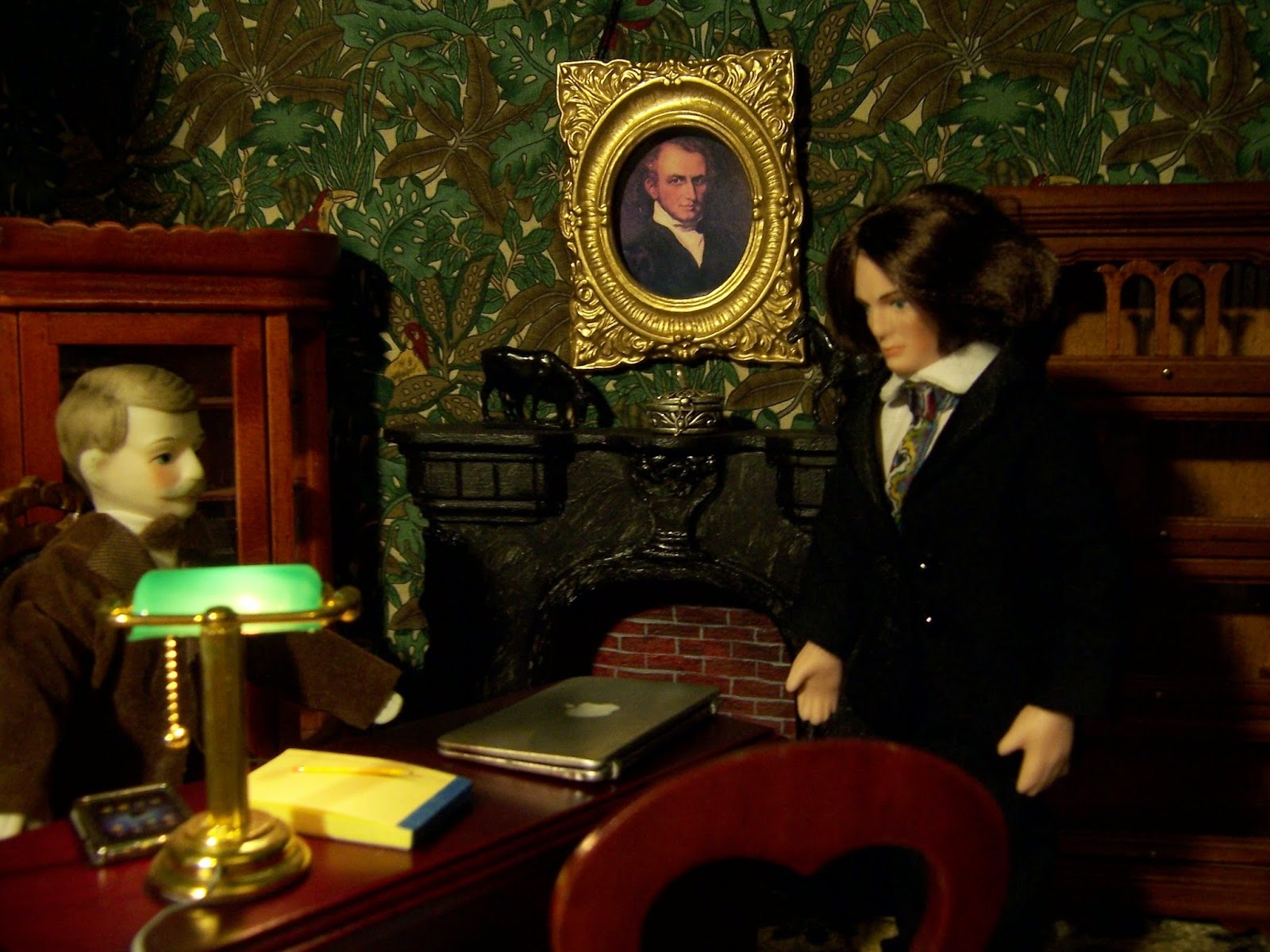 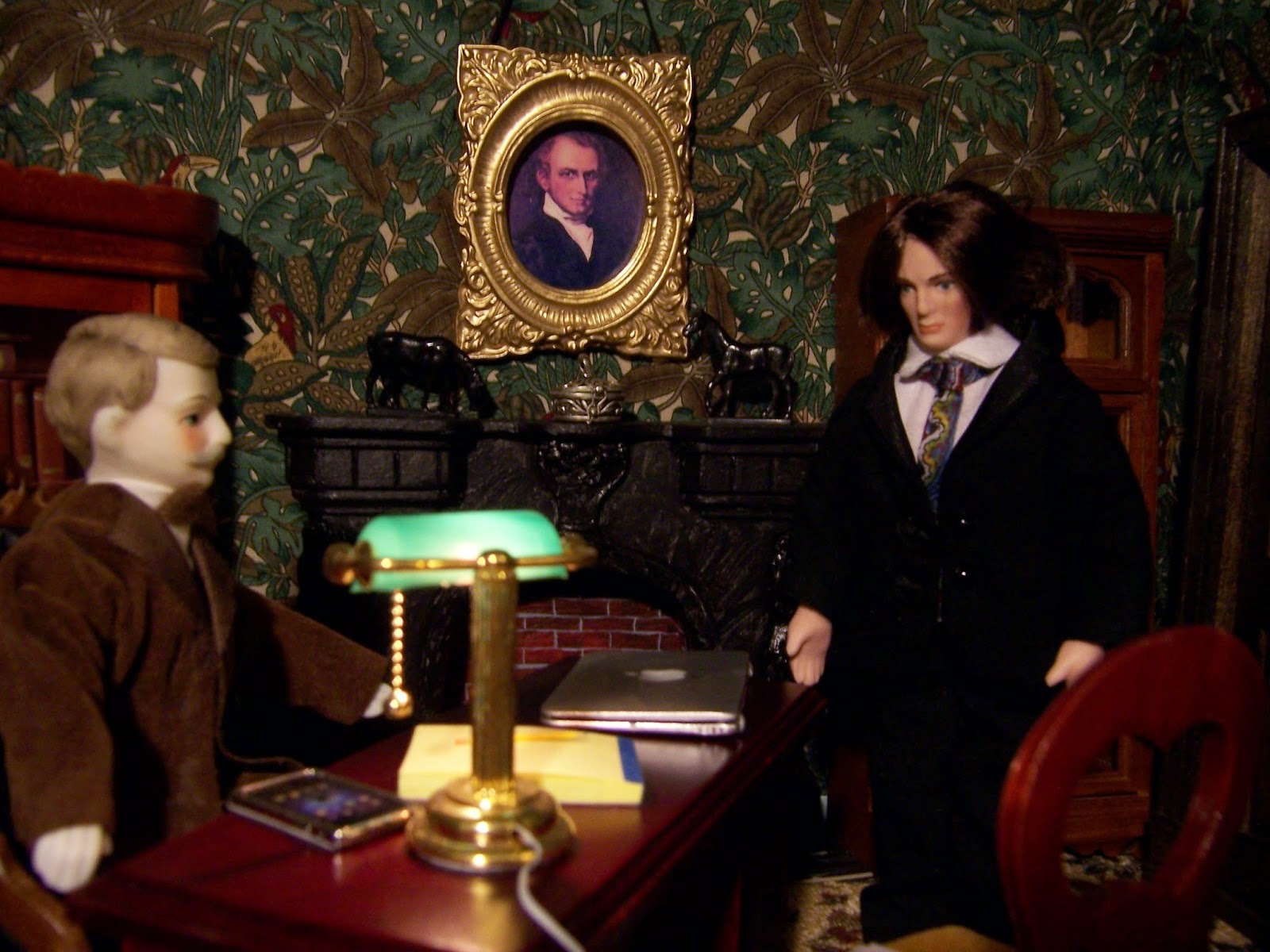 "Someone will have to inform Madame...." said Raymond,
already certain that it would fall to him to explain the oversight.
"I am sure you will find the right words, my son..." replied Gaston.

Meanwhile, Yvonne had hastened home to the Town House. It was near noon, and even though she rarely came home at lunchtime, she thought she needed to tell Guillaume the rumors! He never spoke, but she had grown accustomed to telling him all the details of the business every day. It was reassuring just to have him near and listening. It gave her a strength she didn't think she had on her own. But as she arrived home unexpectedly, she overheard the hired help gossiping as they prepared Guillaume's lunch. Guillaume's manservant, Jean Paul, was recounting to the cook a tale told by Renee when they returned from the Park.... It seemed that Gabrielle had been meeting with a young man at the Park! While she was supposed to be watching the child! How long had this been going on...? Yvonne wondered. And what if it had something to do with the person asking questions?
Now, she was becoming truly alarmed!
She had thought everything was settled....
that the child was truly theirs! 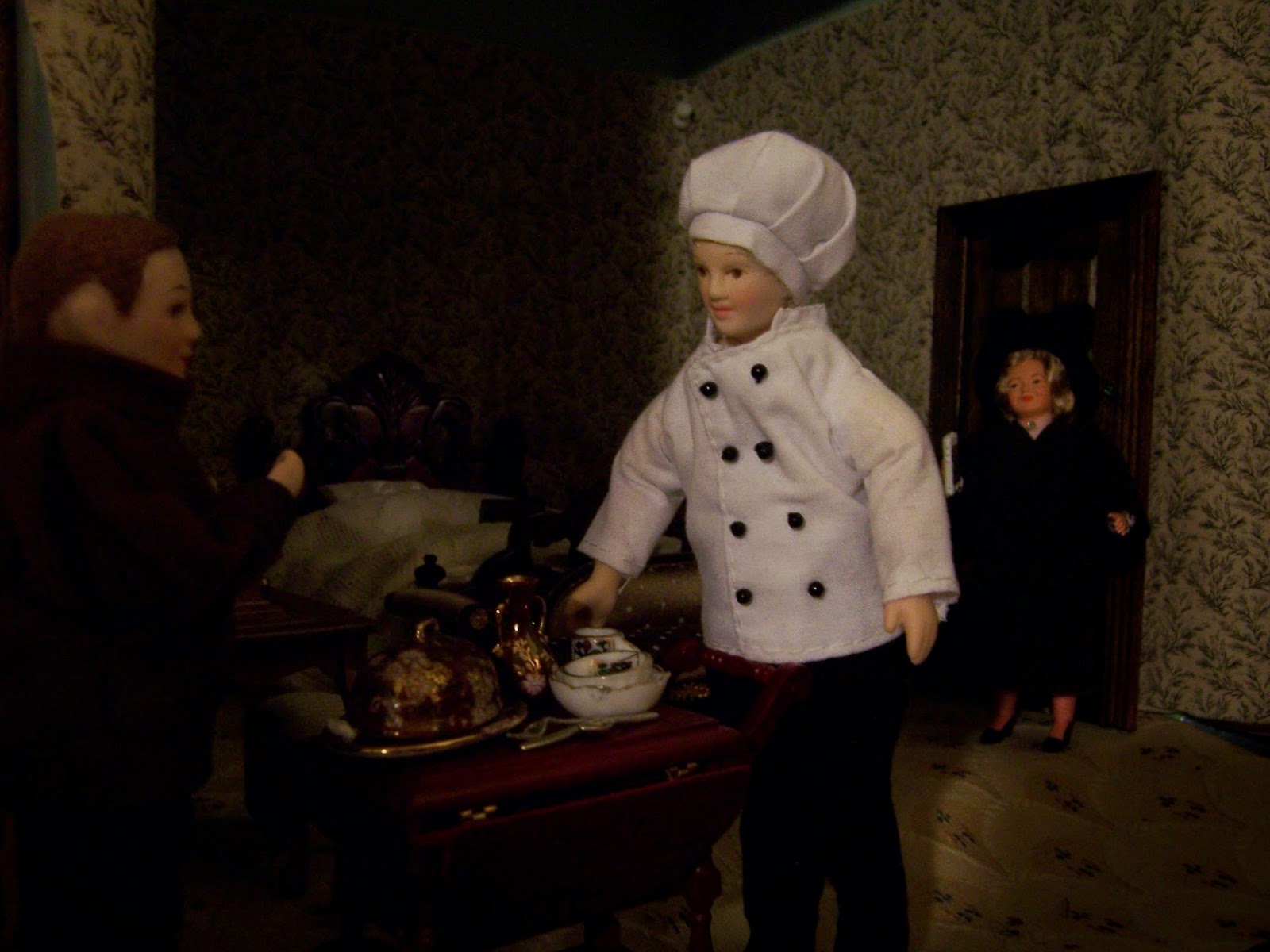 She hurried into the parlor where Guillaume spent most of his time. 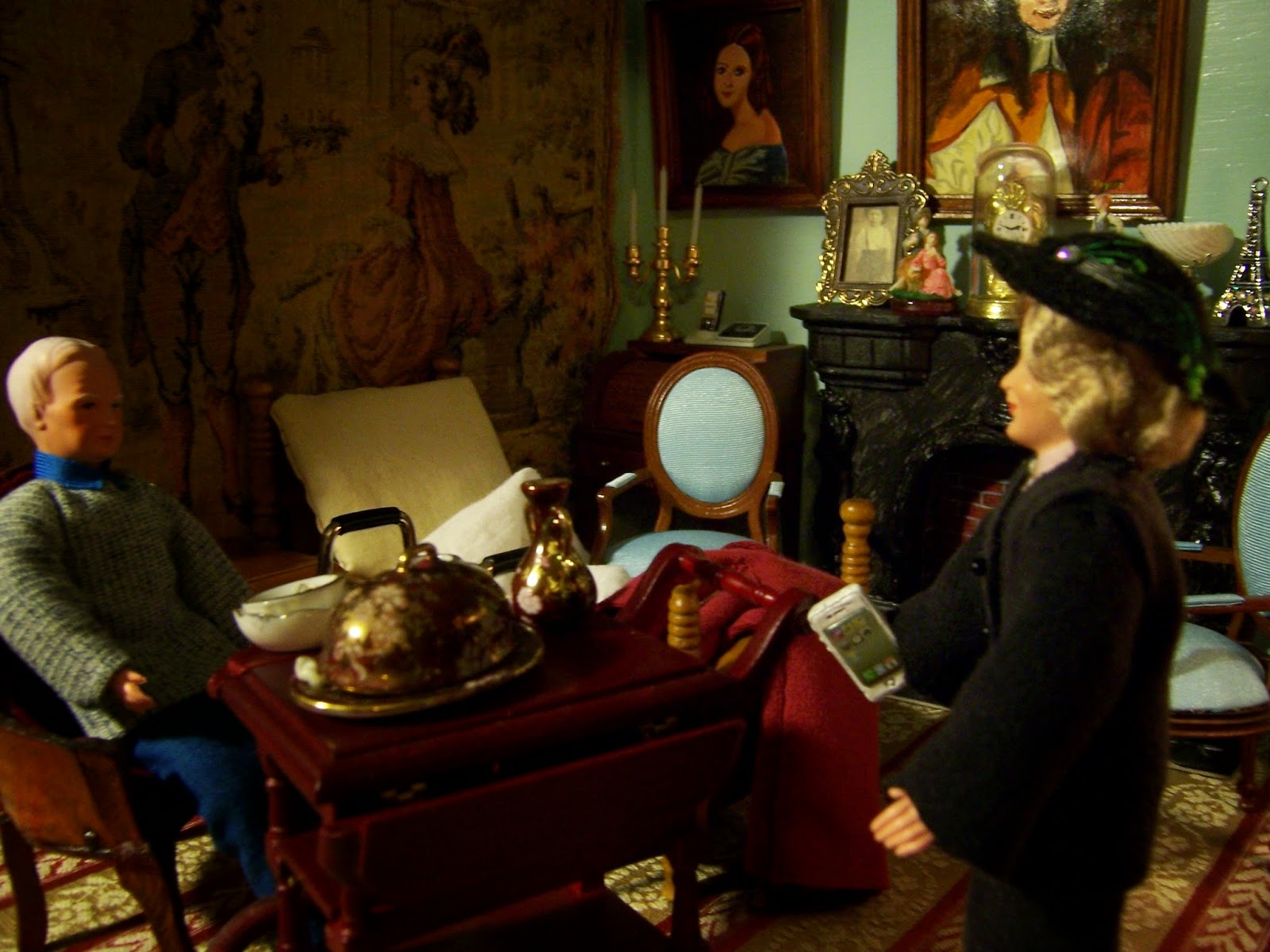 "My Dear Guillaume," she said
"I have heard the most unsettling gossip today!"
"There has been someone in Town asking questions about the validity of an adoption... and the circumstances sound so much like ours..." she said huriedly.
"And I am not sure we ever signed the papers...." 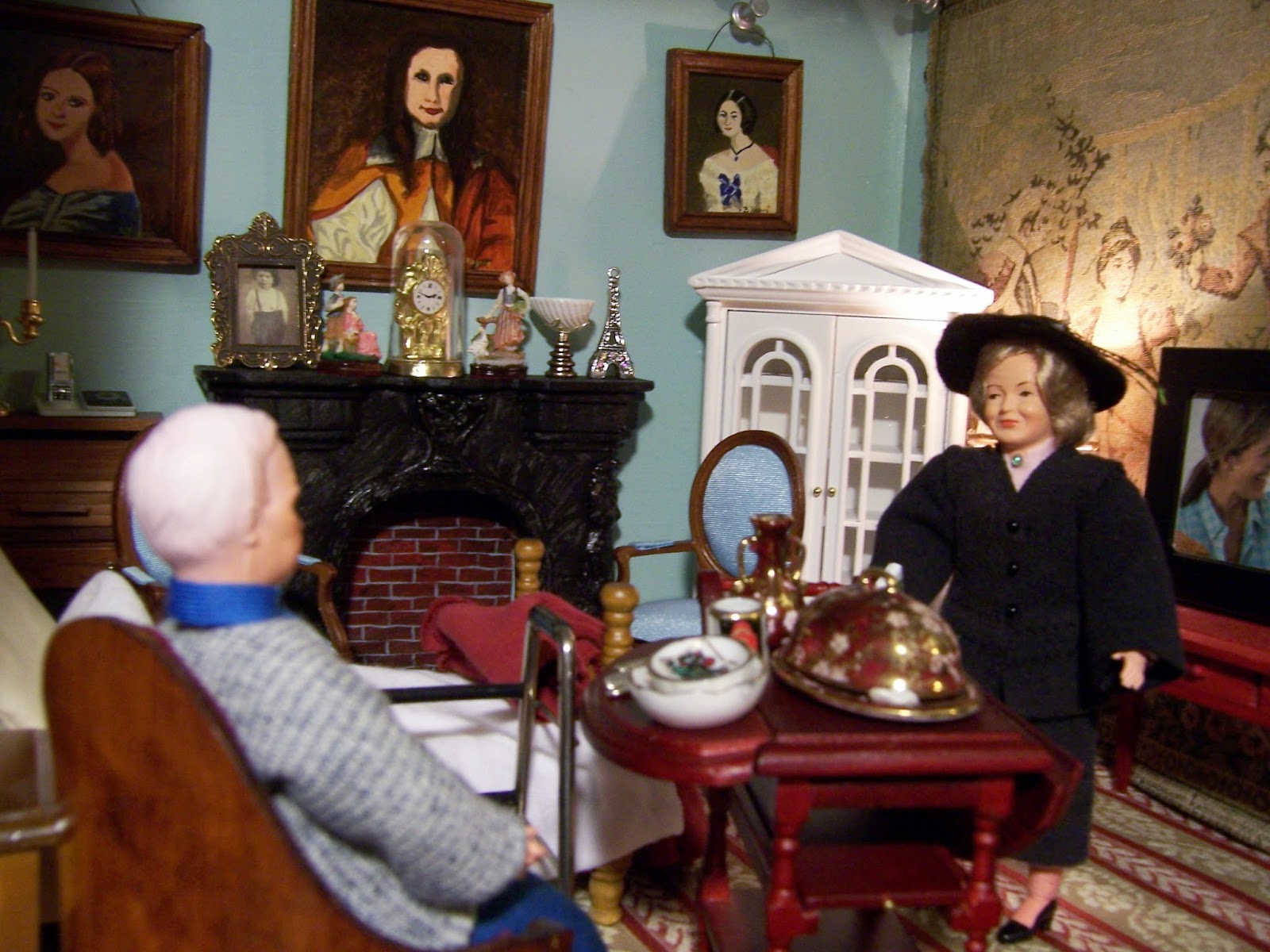 "I am suddenly afraid that our adoption might not be legal!
"And what if there is someone ..... " she said haltingly...
"Someone who would want to take the child from us...?"
"Or even.... kidnap...?" and she left the sentence hanging....
it was too terrible to even consider! 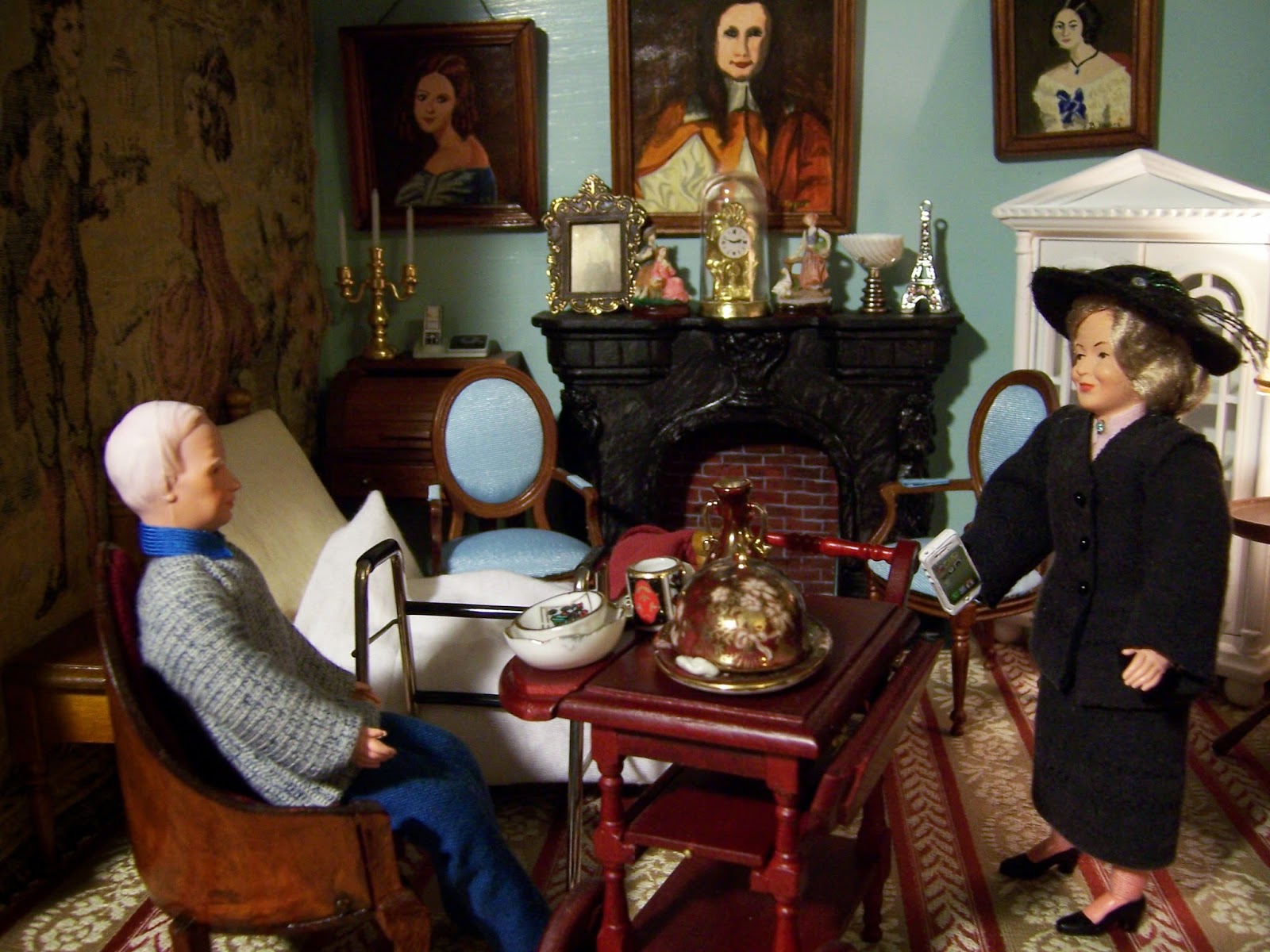 "And just now...." she said, becoming even more agitated...
"I overheard that Gabrielle has been meeting
a man in the Park while she is with Renee...?" 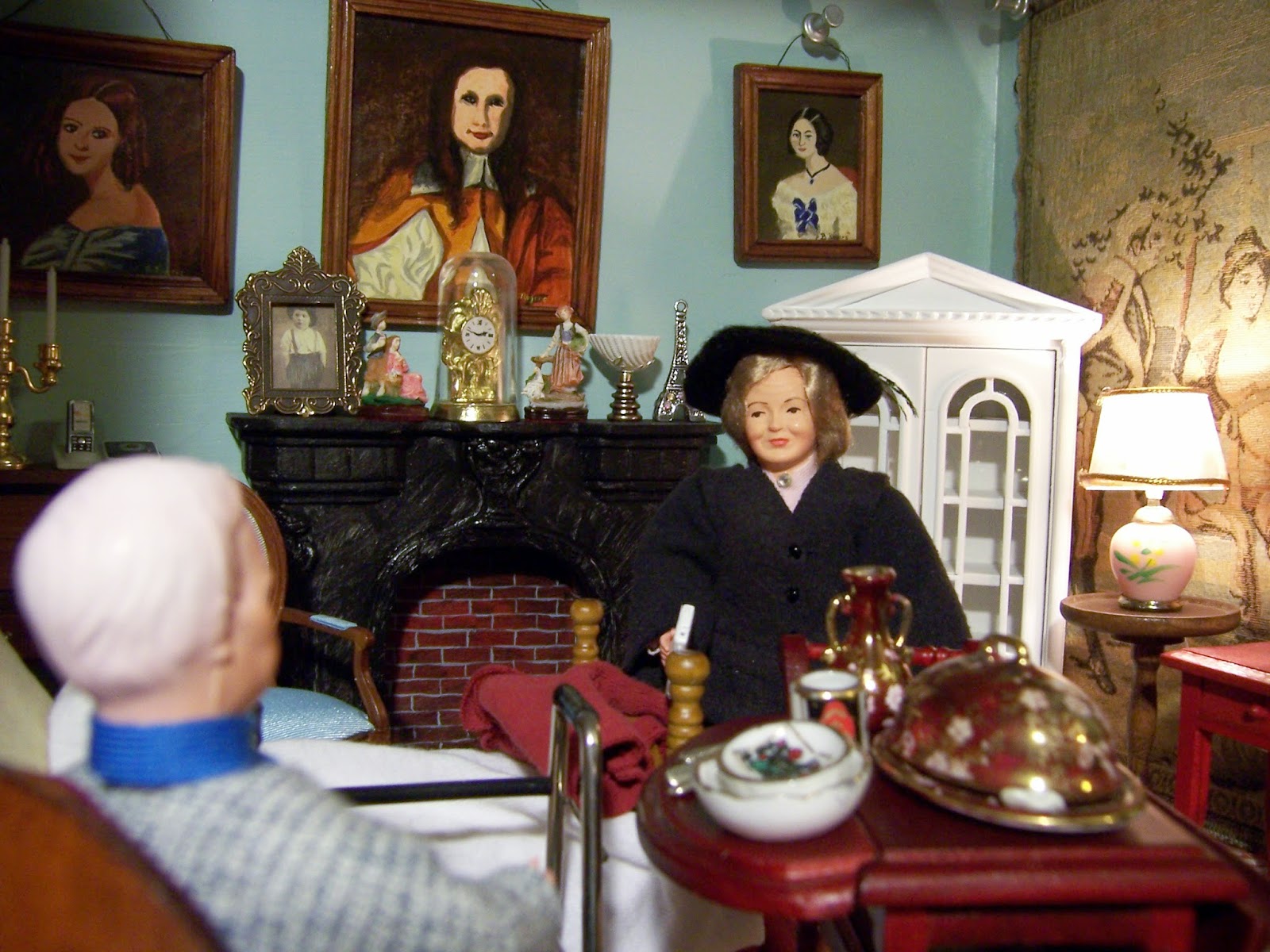 "That will not do at all!" She said vehemently.
"I am very alarmed by this behavior!"
And she turned to call for Gabrielle to join them.
She needed to hear from Gabrielle the truth of the rumors! 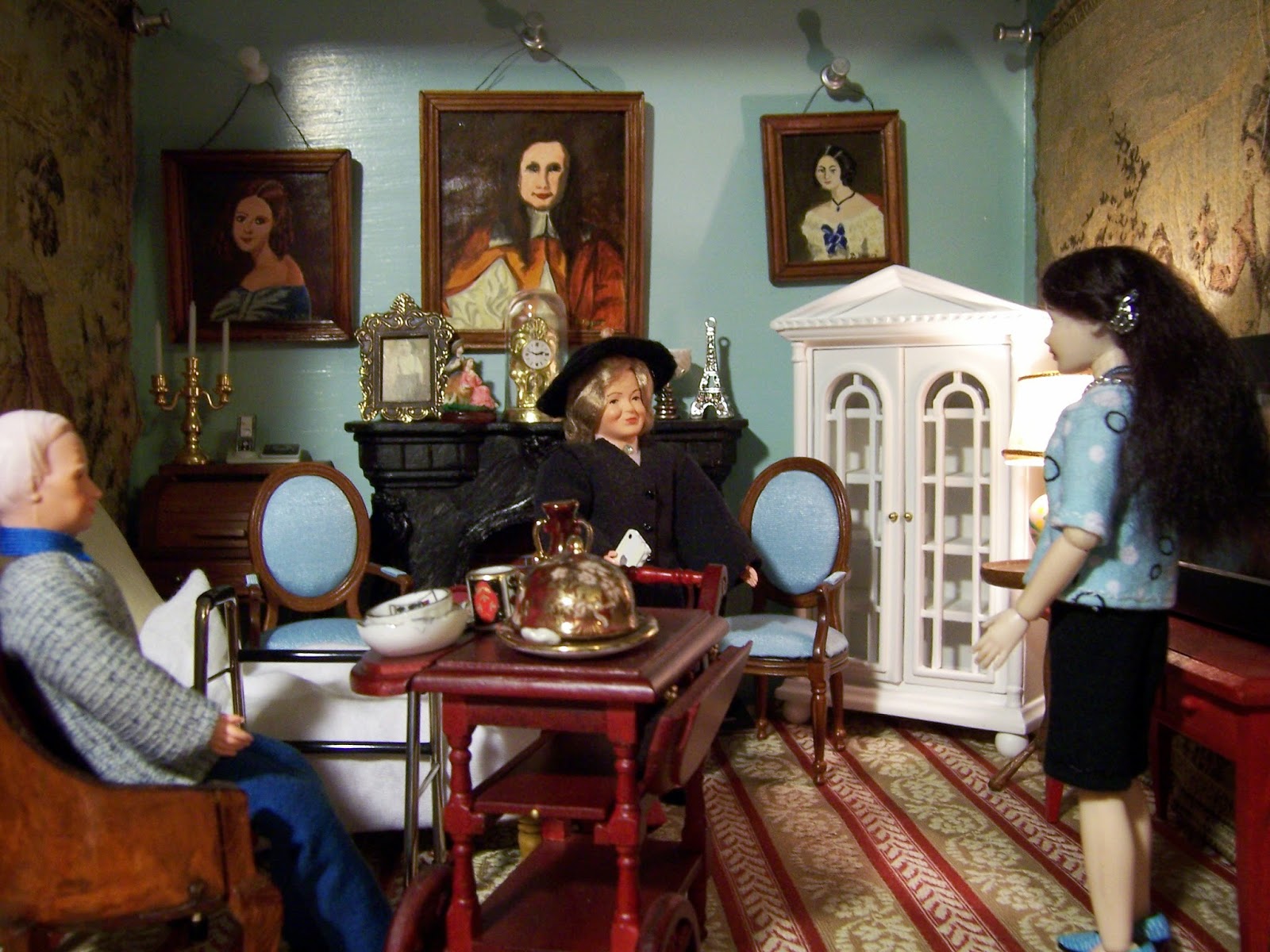 "Ah, Gabrielle..." said Yvonne as calmly as she could,
"I understand you and my Grandchild have been having fun at the Park..." 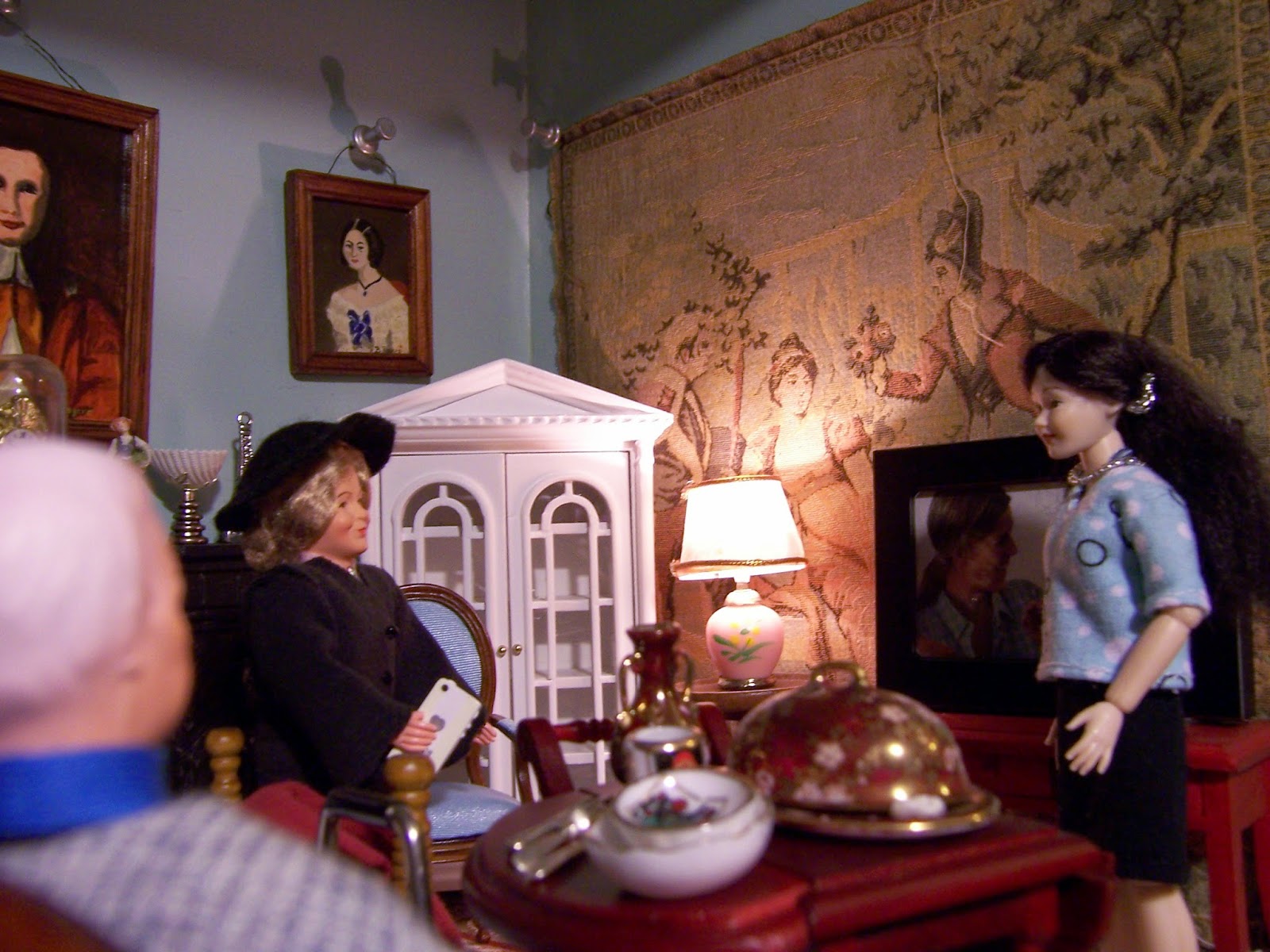 "Yes, Madame," replied Gabrielle,
"as you know, we go every day if the weather is fine." 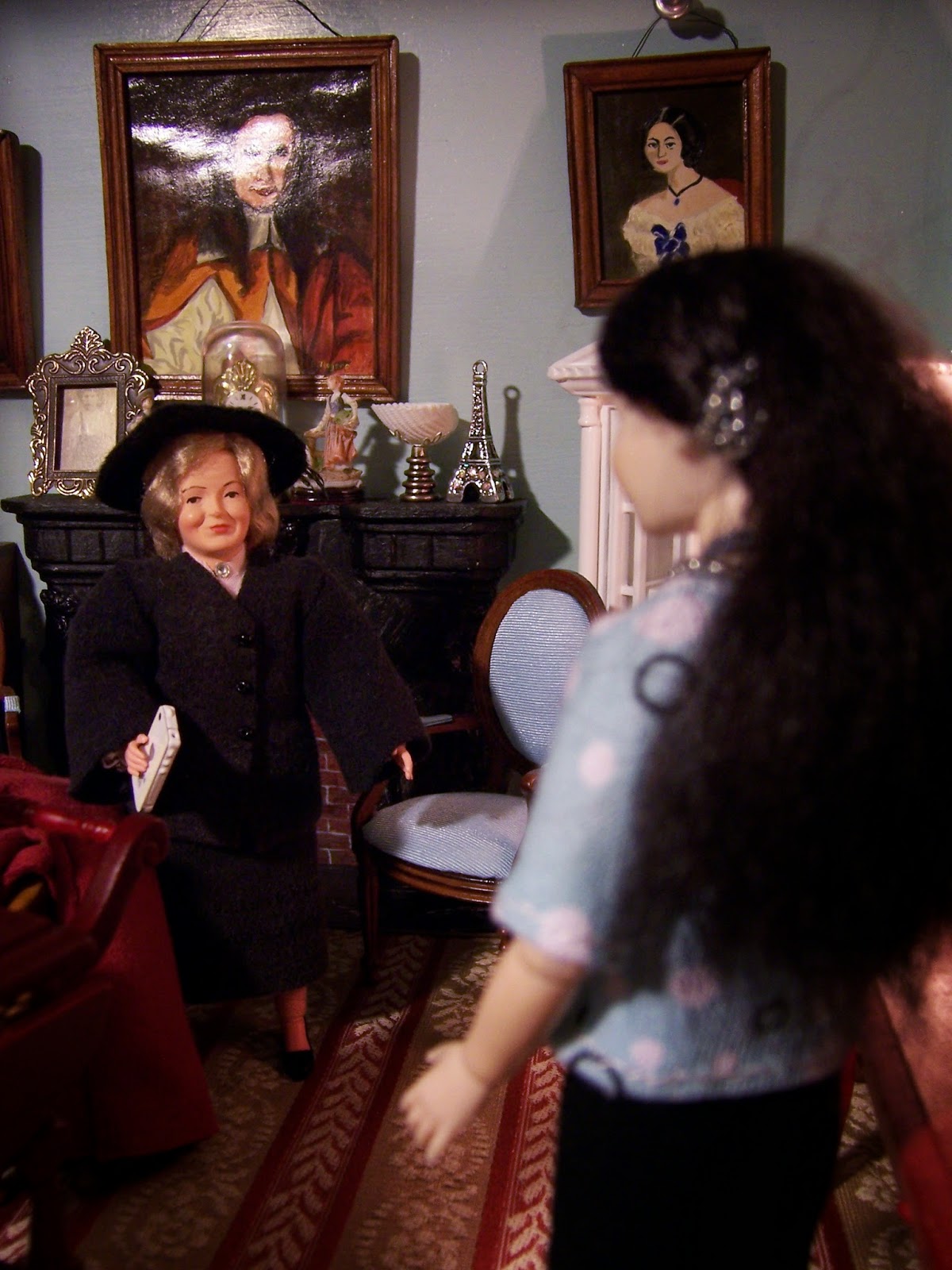 "Yes, " said Yvonne,
"But I have heard you are having even more fun lately....
that you have been meeting a man.....?" and she left the question hanging.
"Ah..." replied Gabrielle, suddenly feeling very unsure of what to say.
It wasn't as though she was meeting him.... he was just there..... 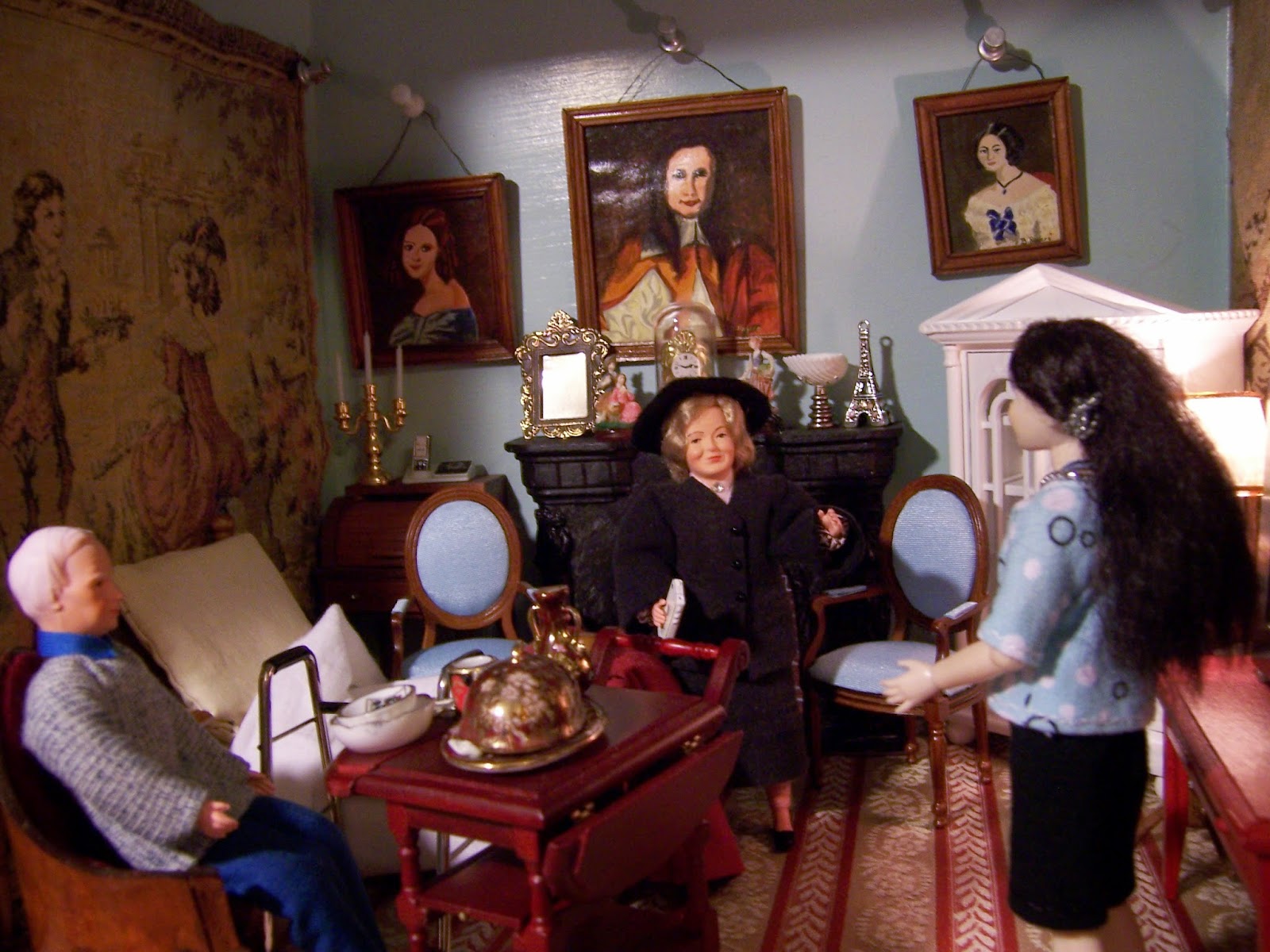 "Well...." said Gabrielle, trying to think of how to explain....
But Yvonne interrupted her saying "I don't want to hear any excuses...!"
"I am afraid I can no longer trust you to take proper care of my Grandchild!" 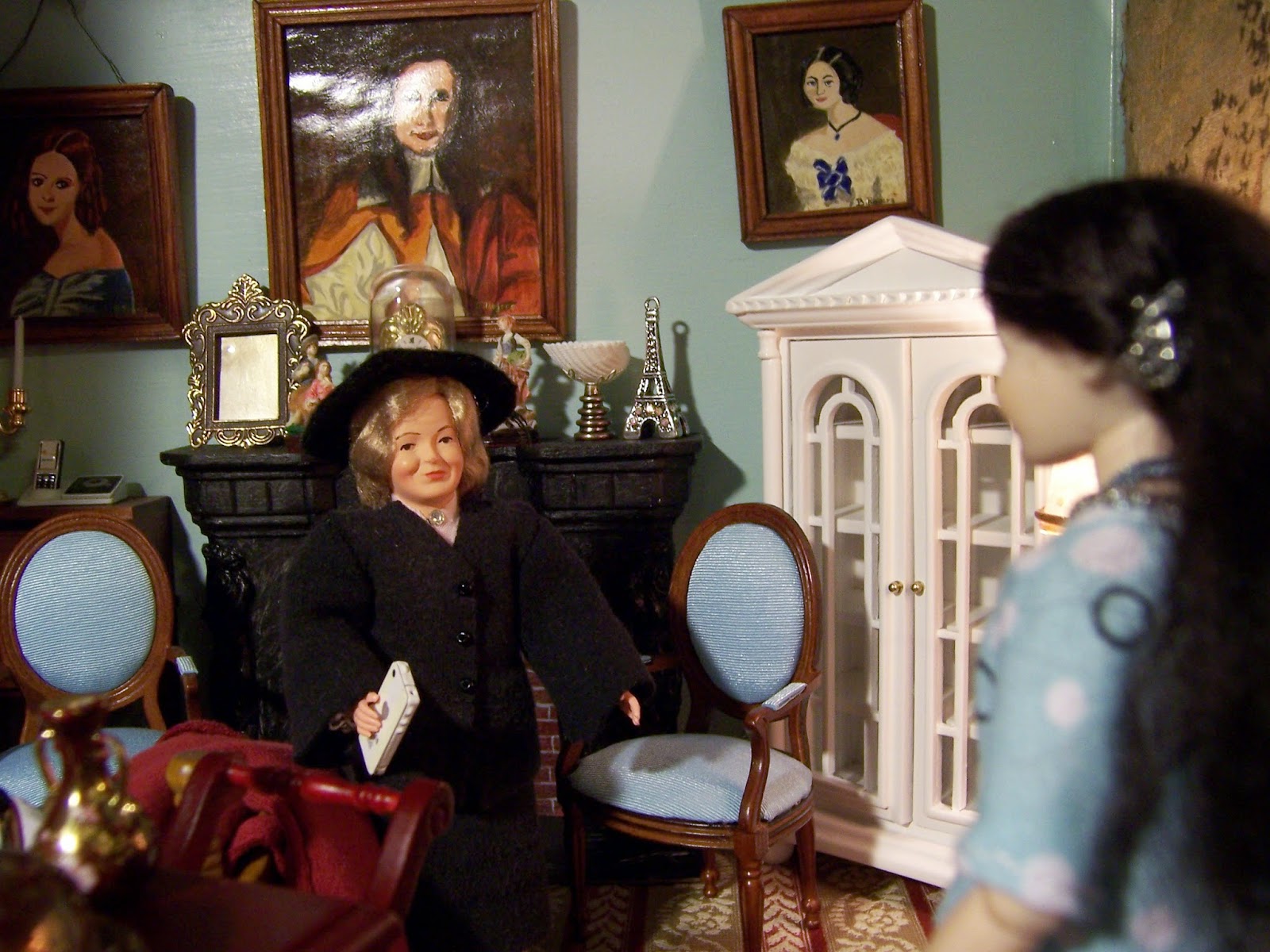 "Did you even think of the example you set by letting her talk with a strange man...?
"You could be putting her in danger!" she exclaimed.
"I am afraid I will have to let you go!" she declared.
"Please pack you things and make arrangements to leave today."
Gabrielle was not really surprised.
She had lasted so much longer than any of the other Nannies before her. But she had known it was only a matter of time before she did something that Madame considered unforgivable.
"Very well, Madame," she replied.
"I will leave right away." 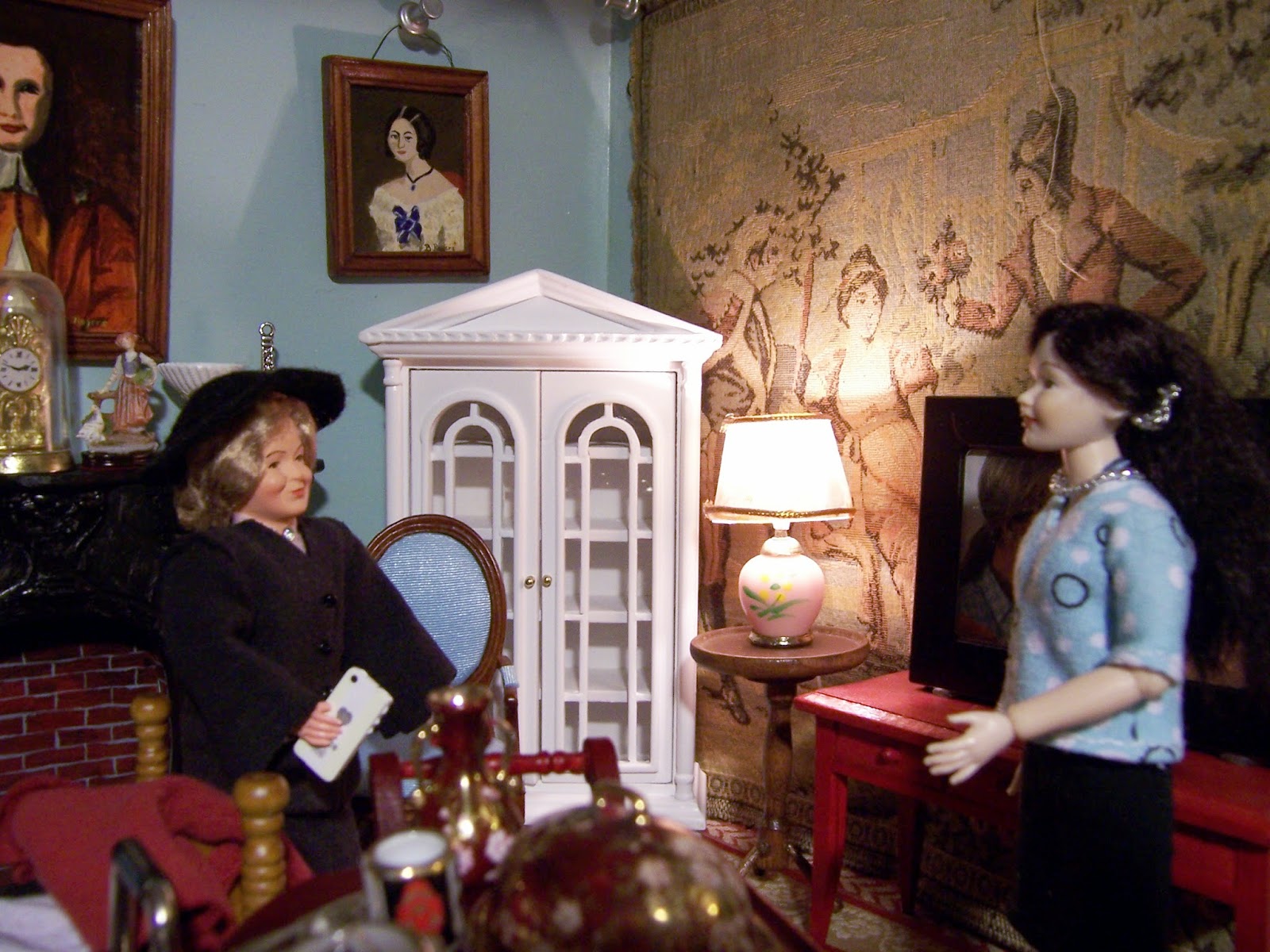 But then she allowed herself the freedom to say what she truly felt.
"I hope, Madame, that you will allow yourself to love Renee as she needs to be loved. Or that you find another who can care for her as she grows up, who will not be dismissed as easily as a Nanny can be fired. She will not learn to love if those she loves are always sent away."

And then she turned to say good-bye to Guillaume. 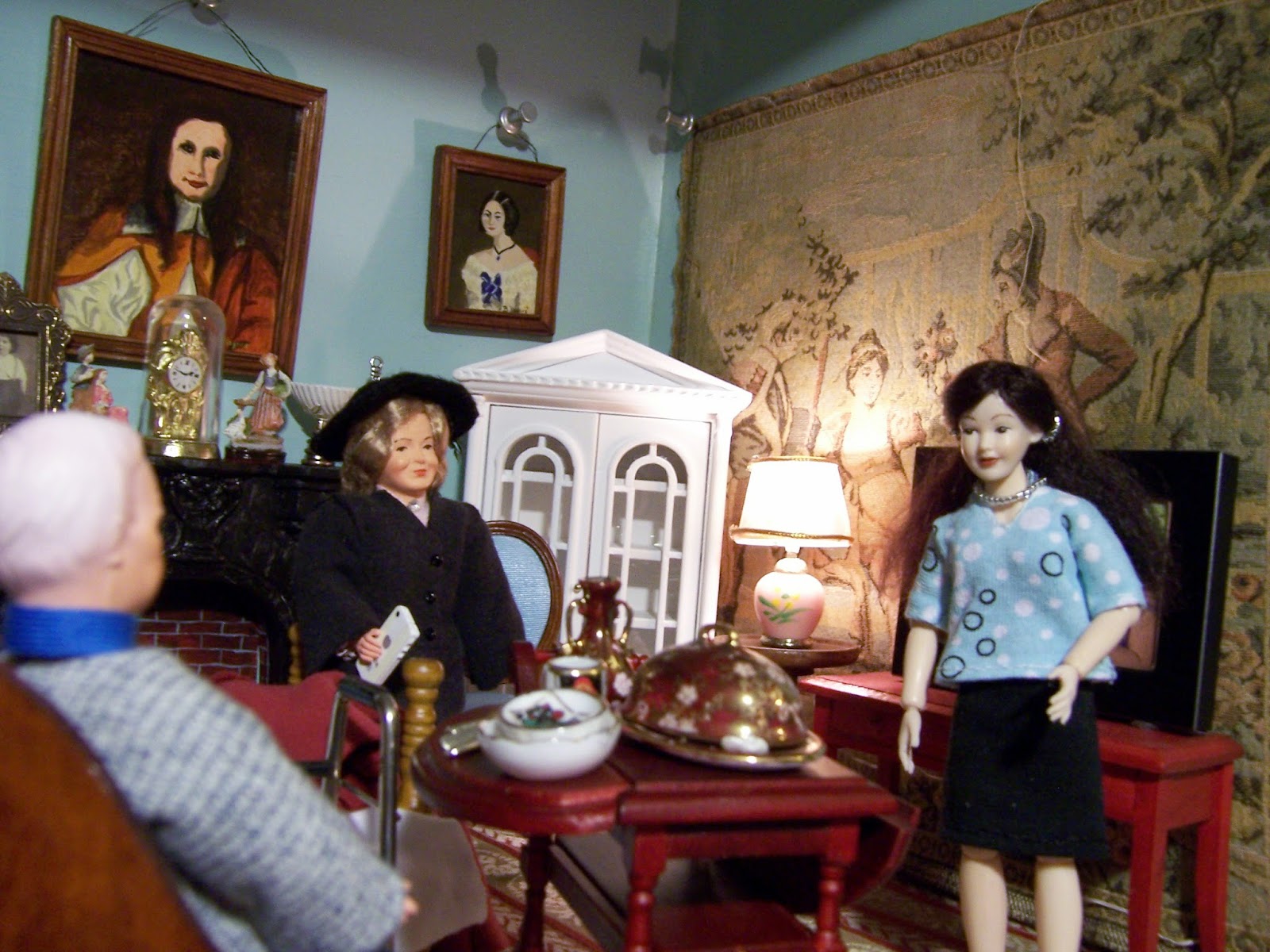 "Good-bye, Monsieur," she said.
"Take good care of your Grand daughter. I know you love her dearly."
And then she left. 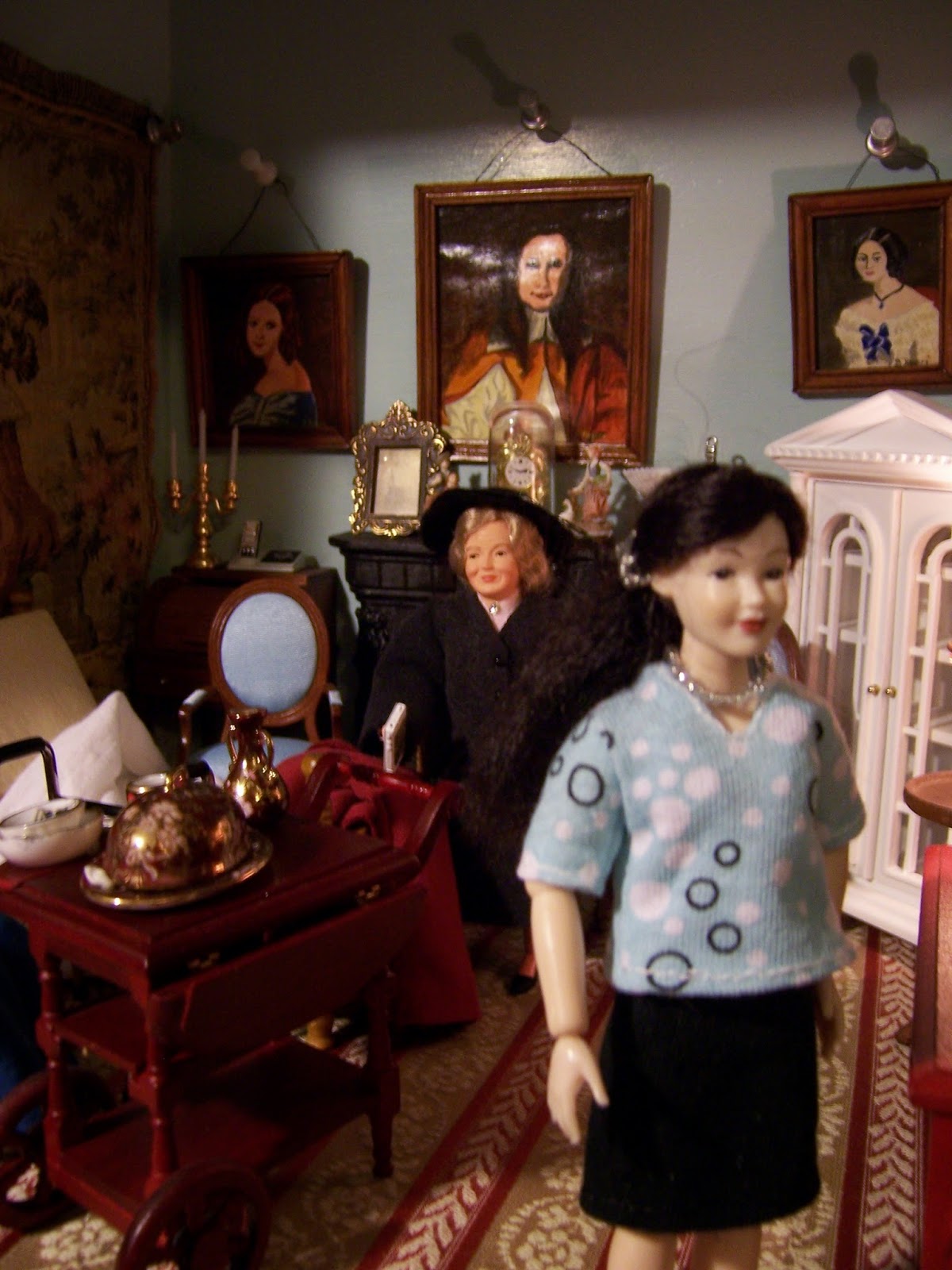 She was determined not to look back.
She would show no regret.
But truly, in her heart she was deeply sad. And Angry.
But she needed to save that for later.
First she needed to say goodbye to Renee....
and that was not going to be easy! 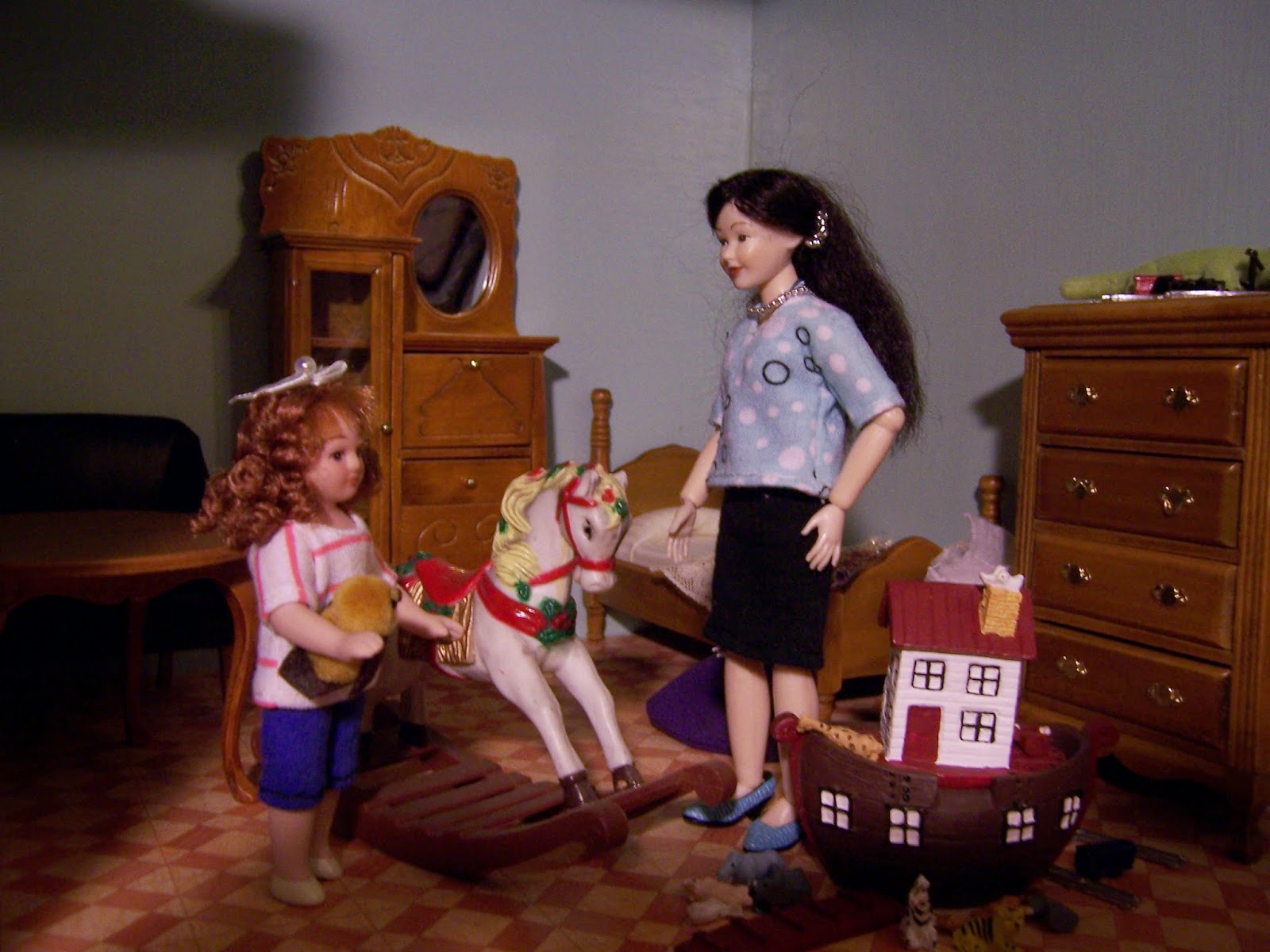 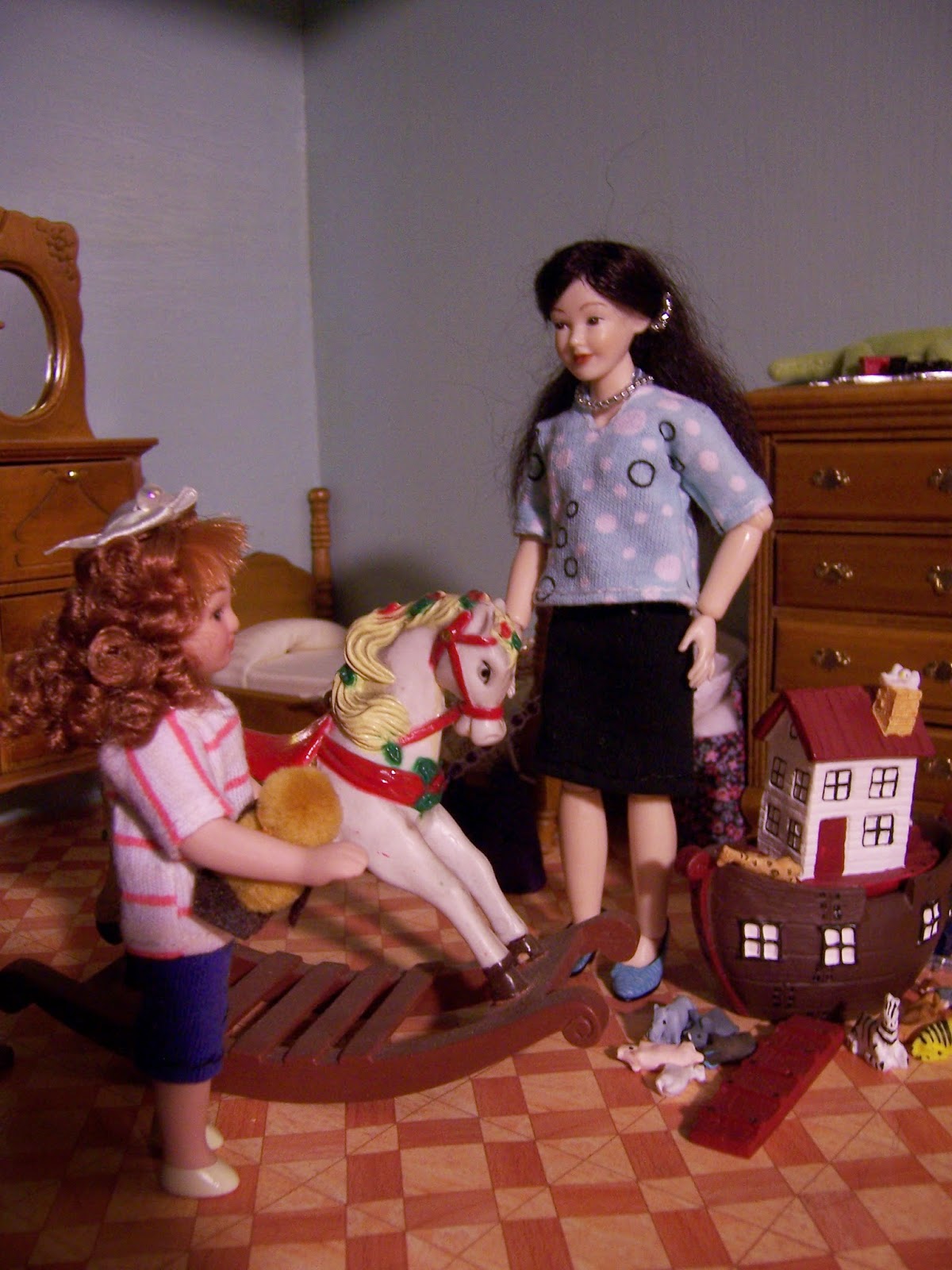 "I want you to promise me you will take very good care of Hibou!" she added.
"He will need you to be brave!"
Renee just nodded quietly.
"I will take good care of him....
and I will show you when I see you again!" she said with unnerving certainty!
Gabrielle could only wish that were so!

Well, Dear Readers, whether you are Ready or Not,
I hope you can endure all this Shocking news!