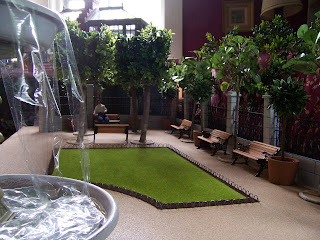 
Can we Pretend, Dear Readers, that it was only yesterday that we last visited the Park? When Will rescued 'Hibou' from the Fountain waters for Renee, and then Daphne confronted him and told him they were "through"? And Madame deMontaigne fired Gabrielle, the Nanny, on rumors that she was "meeting a man at the Park" thus leaving no-one to look after Renee but the young lawyer, Raymond! And Daphne had decided that rather than confront the deMontaignes about her child with no warning, she would write to them instead. It had been a busy and Dramatic day the last time we visited the Park... could it have only been Yesterday?

Well, it seemed to Will as though Everything had changed overnight. 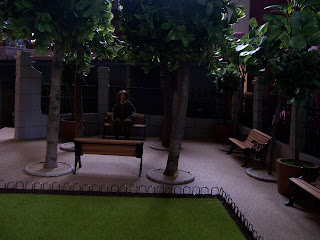 He returned to the Park the next morning and sat on his favorite bench
as he had for every morning this week,
but the Child and her Nanny did not come at their usual time.
It was a gloomy day, so he was not really surprised that the Park was so empty. 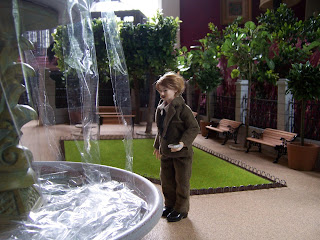 Yesterday there had been rainbows in the fountain mist....
Today there were no rainbows.
The weather had changed too.
He could feel the Fall in the air, and with it came
a sense of melancholy he didn't want to admit to.
It was his last day in town. He was heading back to the States tomorrow.
He had too much to do and no excuse at all to be waiting in the Park for....
he wasn't even sure what he was waiting for!
If the Child and her Nanny did come... what would he say?
He had no idea. And he had work to do.

Meanwhile, was it only yesterday that Daphne
had returned to the Garden of her Hotel
and tried to compose the Letter to her Child's Grandparents? 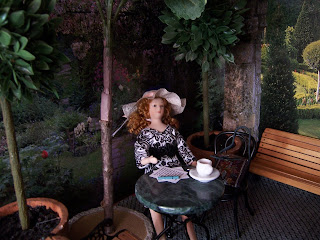 It was much more difficult than she had imagined it would be!
Especially now that she had seen her Daughter....
She looked well cared for.... and happy....
Who was Daphne to intrude on their lives?
Was it just selfishness that was driving her
to try to be a part of her Daughter's life? 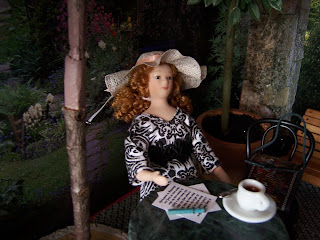 She couldn't find the words to express what she wanted them to know.
She started and rejected letter after letter.
She didn't want to threaten them. But she didn't want to beg either.
She just wanted to be a part of her Child's life!
Was that too much to ask? 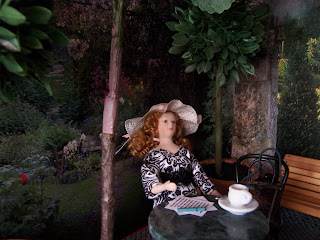 In the end she settled for being as brief as she could
without sounding rude.

"My Dear Monsieur and Madame,"
(she wrote)
"I am sure you hoped to never hear from me.
I am sorry to disappoint you, but I can no longer
accept a life without ever seeing my child.
I have no desire to take her away from you.
But I want to be a part of her life.
I hope you will be willing to meet with me
in person to discuss her future.
I will call on you at the end of the week.
Sincerely,
Daphne O'Malley"

And before she could change her mind
she sealed it in an envelope and mailed it!

And what of Renee?
Well, she could not remember any of the many Nannies
that had come before Gabrielle. She had been too young when they left.
Gabrielle had been her Nanny for more than a year,
so Renee was having a difficult time understanding why Gabrielle was gone. 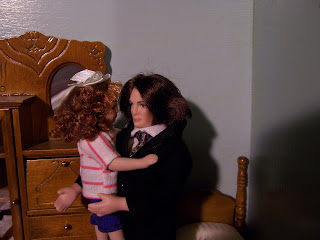 She wanted to know who was to take her to the Park?
Raymond, who had always been the one to look after her
when the Nanny had time off,
assured her that he would take her to the Park.
But he had other work to do as well,
so he couldn't take her in the morning. 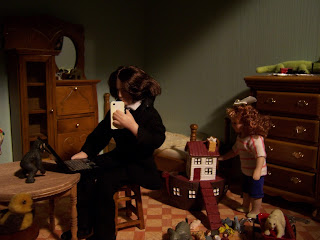 He sat with his laptop at her little table in the Nursery
while she played happily around him.
He needed to hire another Nanny as quickly as possible,
but it was not an easy task. 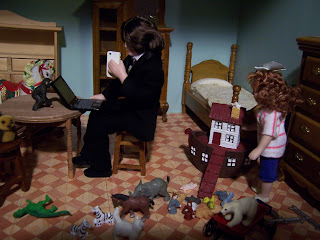 And he had his regular work to attend to...
as much as he could manage from his laptop and phone!
But eventually, he had to agree with Renee.... 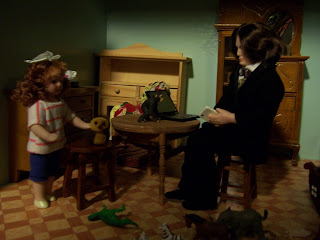 'Hibou" needed to go to the Park!

So they set out every afternoon, rather late...
just before dinner time, for a visit to the Park. 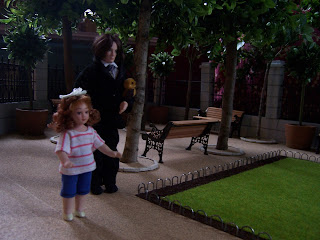 They hardly ever saw anybody there.
But Renee was happy to visit with her "friends" the birds! 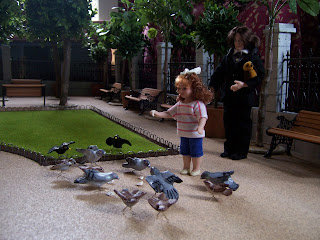 Sometimes they remembered to bring some bread to feed them. 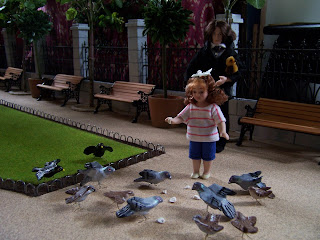 This kept Renee happy for quite some time! 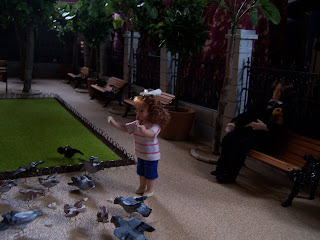 And it gave Raymond time to think.
He had to admit that Renee was no longer just a baby.
She was growing so fast!
They couldn't go on forever with just another Nanny....
Renee would need to start school.
She needed children her own age to play with.
He would need to bring it to Madame's attention.
But meanwhile he would have to find another Nanny!

But most of all, I hope you can understand, Dear Readers,
that Yvonne DeMontaigne was not really to blame for her neglect of Renee.
She had needed to give all her attention to her husband Guillaume
when he had his stroke shortly after Renee came to live with them as an infant.
Guillaume had not recovered his ability to talk.
So Yvonne had to step into his shoes and learn how to take care of the Family Businesses
and the Estates that were their heritage. If she did not do it, then who would?
She had no time left over to care for Renee.
She had hired good Nannies to see to the child's needs.
She was too busy to even admit that she was terrified to love this child...
This child who was Not her son...
but her son's child instead....
and a complete stranger to her!
And her son, who she had loved with a Mother's
complete devotion, was gone forever.
It was so much easier to keep busy and not look too closely
at how quickly time was passing! 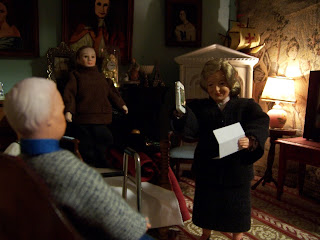 You can imagine her shock, therefore,
when she read the letter Daphne had written!
She brought it straight to Guillaume....
she shared everything with him in the hopes that it
would help him regain his ability to speak.
"My Darling," she cried "You will not believe this letter!"
"It is from that woman... she says she wants to be a part of Renee's life!"
"After all this time she thinks she can just come here..." 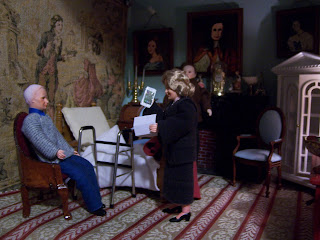 "We cannot allow her to do this...!"
"I am calling Raymond this minute...!" she declared.
"He will have to take care of this..!" she cried.
But as Fate would have it, the letter had taken longer to reach them
than Daphne had imagined it would. So she arrived on their doorstep
only a short while after the letter... and was shown in by the Steward.
She had thought to give them time to get used to the idea of her visiting.... 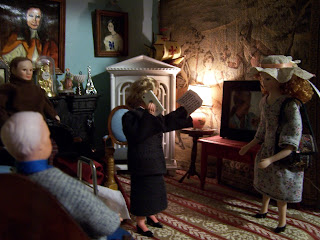 She was not at all prepared to be met with such drama! 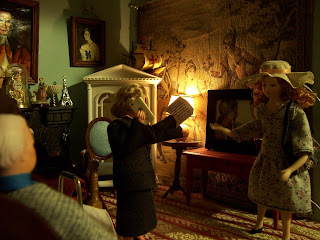 And she was even less prepared to see Guillaume so frail....
She had not been aware that he was unwell!
She hardly heard what Madame was saying.
But it only made her more resolved than before.
For some reason she could not explain, she felt ... needed here!
But lest you think that is too much excitement, Dear Readers,
Renee and Raymond were just returning from their visit to the Park..... 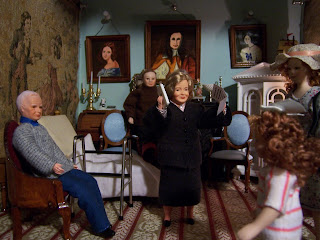 "Ah, there you are Raymond," cried Madame, sounding quite relieved!
"I need you to settle a legal question...." she began... 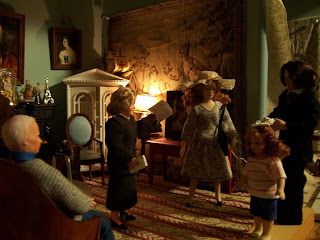 But Guillaume was not listening to his wife.
He was gazing at his Granddaughter
who he loved more than anything in this world...
And Daphne, too, could not take her eyes off her child! 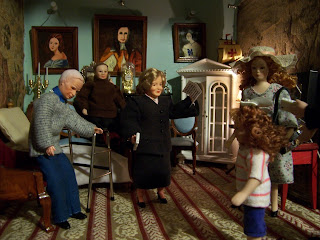 Renee, who always stopped to see her Grandpere
when she came home from the Park,
was surprised into silence when she saw all the people in the room.
And then suddenly Grandpere Struggled to stand up! 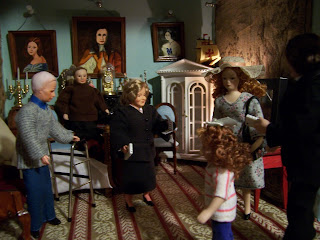 "My Darling..." he said...
and his voice was only a little more than a whisper...
but it completely caught their attention! 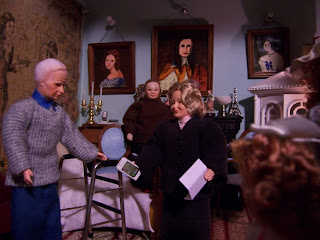 Yvonne looked at him in complete surprise... 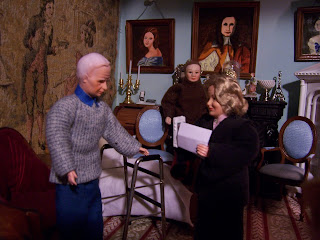 Guillaume cleared his throat, as though he were surprised that it made a sound,
and said quite clearly "Renee needs her Mother..." 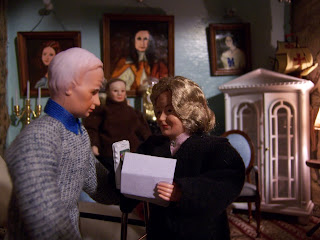 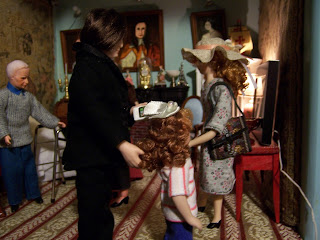 And at that moment Raymond decided that it was
time for Renee to leave her Grandparents to their discovery,
and he suggested that she run down to the kitchen
to see what cook was making for Dinner.
Renee did not have to be asked twice....
it was her next favorite place to visit.... after the Park, of course!
Well, Dear Readers, I hope you will understand
If I leave you here for now....
After such a visit to the Park!
Yes, Daphne's Story will continue....!