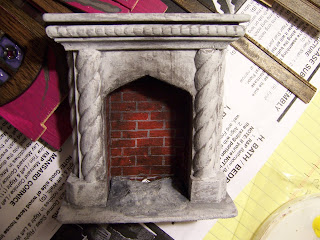 
Another Busy weekend, Dear Readers, working on the RL project, kept me from doing much with the minis. But I have become really determined to accomplish at least Something in spite of the demands on my time and energy! And this weekend I was able to get three small things done! I realized that I had forgotten to add the ashes to the bedroom fireplace! And because I had also decided that it would Have to have a lit fire, there absolutely needed to be a pile of ashes below the fire grate! So I cut a piece of egg carton that had a humped shape and glued it in the hearth. Then I painted it ash colored and gave it a try with the "regency" fire grate. 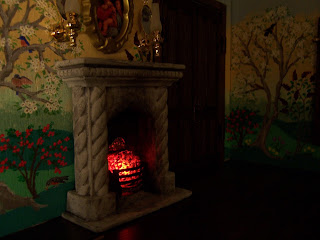 Yes, I know, my pictures are terribly dark, it is almost impossible to see the details! 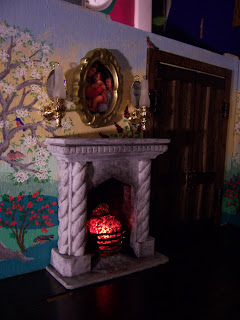 There will need to be a fire screen or a fender at the very least
to prevent run away coals, but I think it is looking good!
Such a small detail, but I would have been
very annoyed if there were no ashes!

The second thing I accomplished, Dear Readers,
was that I remembered I had not yet painted
All the birds on the walls of the bedroom!
This was something that would be very very difficult to do
if I had already glued the walls in place! 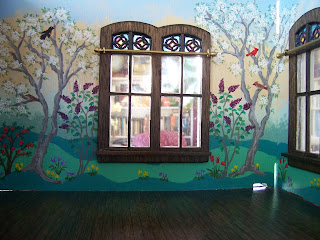 I managed to add four birds to the front wall, which is already attached,
but without the side wall in the way, I can reach in from the side
to paint on the front wall with at least a little less trouble!
(The above picture shows the side wall in place, but it is still removable!)
There still need to be quite a few more birds added to all the walls.
The idea is that it is a New England version of the
Chinoiserie wall decor, so fashionable in the eighteenth century,
and so it needs to be filled with our native birds!
So far the fireplace wall has American Bluebirds and Robins,
and the front wall has the Red-winged Blackbirds and the Cardinals.
But that is just a start! There are many more that I plan to add.
It is such a little thing, but I think it makes a huge difference!

And the third thing I managed to do was to start the painting
of the sculpey tree branches for the Parlor Fireplace. 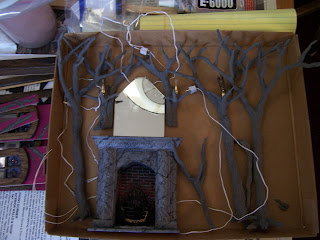 Here you can see them all removed from the parlor but not yet painted.
The color of the sculpey is just a little darker than the paint I used for the Fireplace.
It is a slow process to paint all the branches,
so I started with the ones surrounding the mirror on the mantel. 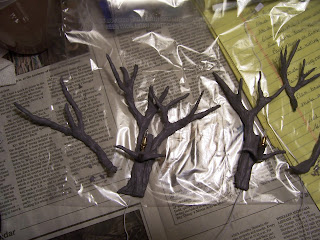 This is just with the first coat of paint.
There will need to be some shadowing and texturing and marbling
to make them match the fireplace. 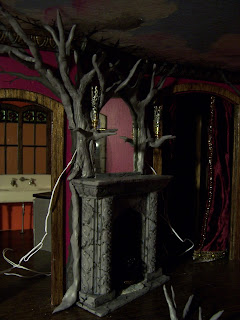 But, of course, I have to test them in place even though they are not nearly done.....
(And once again, I am sorry it is so difficult to get good pictures at this time of year!)
Above, you can see them in place with the sconces turned off. 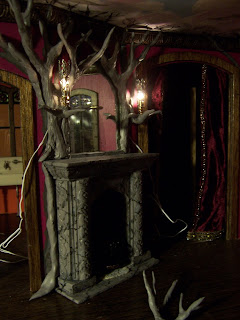 And here you can see the sconces turned on, and the sconce "shades" added.
This view is taken while the side wall is removed...
once it is attached you will not be able to see this view
except through the side windows! 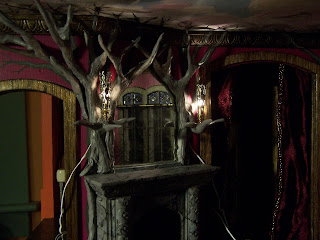 I do think I am going to like the effect when they are all painted!
The color difference is very small,
but I think it is such an improvement
to have them unified in color!
So Dear Readers, I might have only done three little things,
But we all know those Little Things
make a Huge difference!

Posted by Daydreamer at 8:13 PM