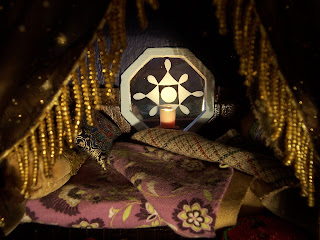 I had a couple of days of Holiday Time left, Dear Readers, after I had finished painting the Christmas Card (see previous post for a picture!), and had hoped to get a Great many things done on All my mini projects! But, as often happens, every little thing takes longer than you could imagine to complete.... and the Indecisive part of my Imagination prevented me from Choosing the best projects for the moment.... so I did not get very much done at all. But I did get a few Little Things done.... even ones I had almost forgotten about! I hope you can recognize, or even Remember The Folly Bed Nook in the above picture (It is so dark at this time of year it is difficult to get a good photo!) Long ago I had started to sew a pair of bolsters for either end of the bed, but I was not at all satisfied with the way the first one was turning out, so I put them aside and forgot about them! Well, for some reason, I decided it was time to finally finish them! 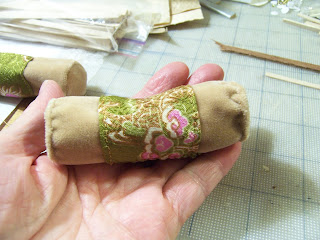 I had sewn one of them but did not have the right material to stuff them. I wanted to try sand or beads so they would look heavy and sag in the middle. They are sewn the old fashioned way by hand, and at first I thought they would be too large and bulky for the bed nook. But then I decided to over-stitch the ends, making a welt around the end seams, which gave more shape and definition to the pillow. I had bought some bird gravel and used it to stuff and I really liked the way it came out after all! Then I tried to make the second one to be just like the first one, and even though I had cut the pieces at the same time, the second one did not turn out right at all! I had to pick it apart and re-stitch it more than three times! (This never happens to me!) Eventually I got it close enough to the first one.... 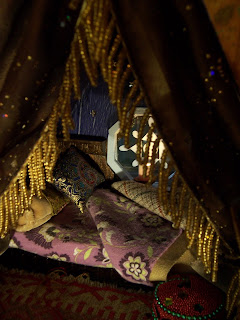 When they are in place on the bed they are almost impossible to see....
(Maybe the next time there is a sunny morning.....)
But I know they are there! 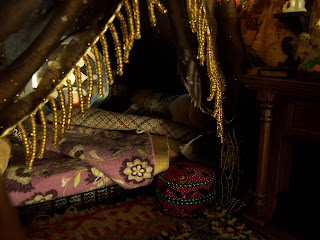 And because one is at each end of the bed....
you don't notice any difference in size at all!

Another Tiny little detail that I worked on was the Curtain rods in the Willowcrest.
It bothered me that it was impossible to remove the curtains from the rod once the walls were all in place! This is because the rods are made to slide out the ends of the eye-screws that hold them to the walls.... but you need enough length of the wall on either side of the window for this to work!  Which just isn't there in these small rooms! I decided I would need to open up one of the eyes on each set of curtain rods.... so that it was a hook instead.... 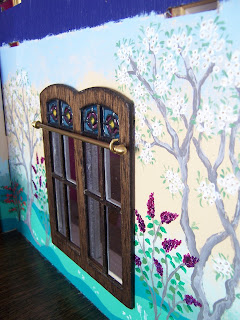 This way you could lift one end of the rod out of the holder
and slide the curtain off the end!
So while I had taken the Willowcrest mostly apart.....
I fixed all the curtain rods!
And while I was at it I worked on those pesky window sills....
remember the problem with the muntins abutting the window sill on the exterior?
When I fixed the exterior side.... it left an unfinished strip visible from the inside! 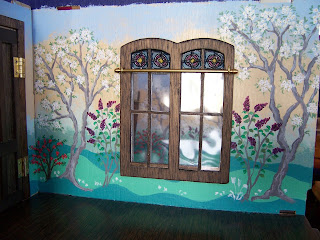 Here you can see I have covered three out of four of the panes...
that little white stripe at the bottom on the right
is the exterior frame showing on the inside.
(Sorry about all the reflections!)
You can also see I have added the under-painting for some more flowers
on the wall murals along the bottom edge.
And once all the window frames had been fixed... I added the interior sills.
It makes the windows so much more realistic!
(The kit design does not include any interior window sills!) 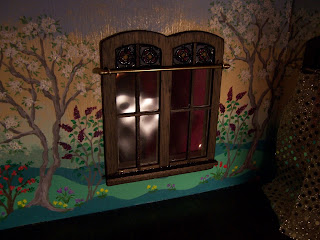 Here you can see the window sill added to the interior of the window.
(Sorry it is so dark.... night again!)
And the exterior window sills that had not yet been attached I fitted and glued in place.
It takes quite a bit of picky carving away at the notches in these pre-cut pieces
to get them to fit flush to the frames and the wall! 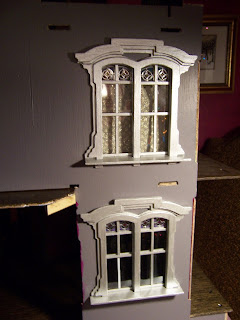 These also required the exterior window frames and muntins to be added..... 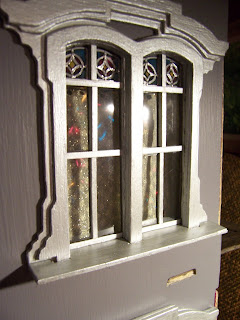 And I had Almost enough already painted pieces
of the very fine silver trim I am using....
But not quite enough!
I will have to cut and paint some more pieces
in order to complete all the windows.

And yet another small detail I worked on
was the fireplace for the Willowcrest bedroom... 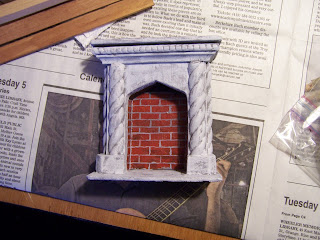 I had not been happy with the way the paint looked
the first time around, so I re-painted it!
It is made of wood, but I wanted it to resemble carved stone.
(I also added a thicker wooden base for the hearth.)
And painted the bricks on the hearth interior....
And tested the look with the Regency Fireplace insert.... 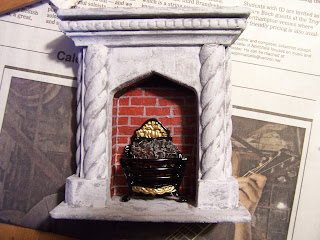 It looks lovely, but Much too clean!
So I added a lot of "soot". 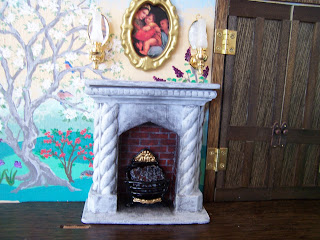 Which really doesn't show well in this photo...
the light is too glaring!

Maybe you can see the soot a little better in this view.
I have not attached the plug to the wiring for the fire yet....
so we cannot see it lit.
But you can sort of see the additional tiny flowers
I added at the bottom of the murals....
(Very picky little details!)
Tulips, violets and dandelions.... 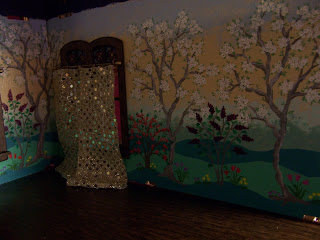 So hard to imagine at this time of year!
(And there will also be a baseboard added at the bottom.)
I will have to get some better pictures for you in the daylight!

And Another project I picked away at was the
Painting of the rocks on the Cloud Palace Tower! 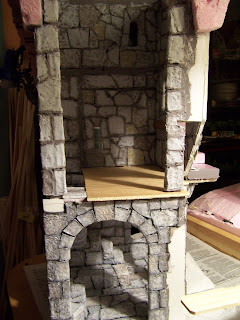 Believe it or not, Dear Readers, this is a part of the project
that one could never possibly be satisfied with the results!
The rocks are fine.... but they are all different
from the ones painted on the lowest section of the Tower!
It is like when you buy yarn and you get two different dye lots
and don't notice until the project is all done and you can see where one color is off!
The paint batches for the rocks will never match the older part!
So I have decided that it is "good enough" and moved on
to gluing the parts together! 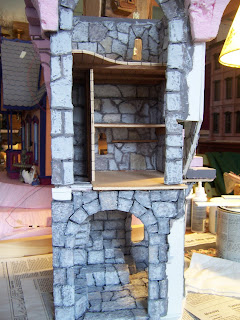 Which means I can construct the beds
for the Guy Bearys.... in the "Bear Racks"!
(Otherwise know as bunk beds and a loft!)
Once I get the interior structure glued
I can add all the rest of the "Rocks"
to the outside of the Tower!
And one more thing I want to show you, Dear Readers,
is not a project at all....
But a Gift I received for Christmas from my Dear Niece! 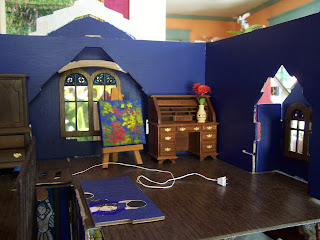 She sent me this fantastic roll-top desk
and the beautiful painting and the bouquet of flowers!
Thank you, Hali!
The only way I can be picky with these is Where to put them...
and I think the roll-top desk might just belong
here in the attic of the Willowcrest!

So Dear Readers, I hope I have not bored you
with all these Picky Little Details!
Sometimes you just have to be Very Picky!

Posted by Daydreamer at 9:30 PM