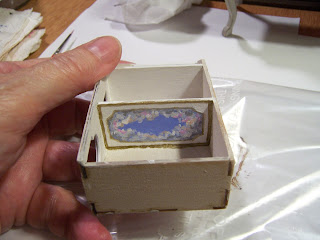 Another Day, Another painted Ceiling in my Mini Worlds, Dear Readers! I hope you do not think it is too boring to have the same cloudy sky repeated on the ceiling of the other room on the ground floor of this little house. This room is supposed to be the "Parlor", but I think I will call it the "Salon" as that sounds a little more ornamental! In any case, I wanted it to have the same elegant feeling as the library, although in this room I left a border of "plaster" around the edge of the ceiling with the "open sky" in the center. The walls in this room have a lovely pink and white stripe pattern paper with decorative pink "losenge" panels on several of the walls. There are many gold accents in the picture frames too, so I planned to add the gold trims at the cornices as with the Library. But I didn't get that far! I thought it would be a good idea to figure out when the window panes should be attached before I went too far with the decor! And along with that step, there was also the window trims for the outside of the building which needed assembling and primer painting. 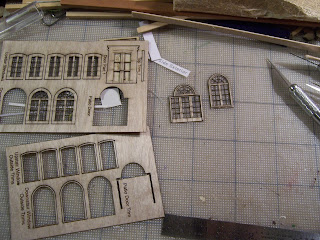 These pieces are Sooooo Tiny and fragile.....
it feels absolutely amazing that they are as elaborate as they are!
The exterior window frames all are made up of two pieces....
a base and a trim section.
Here you can see I have assembled a couple of them. 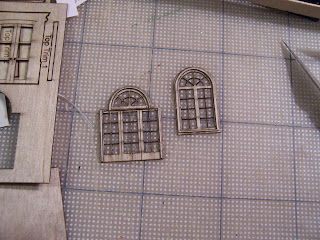 It is interesting to note how much sturdier they feel
with two layers than with one alone! 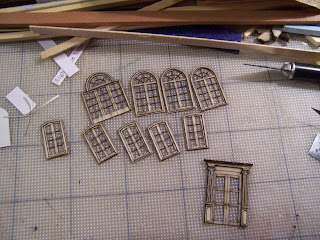 The door is very elaborate and is composed of two layers
plus two trims across the top! 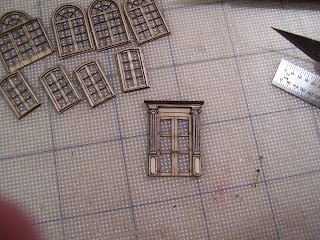 (And no.... I am NOT going to attempt to make hinges for this door!)
So while I was trying to construct all these frames, Dear Readers,
I was also figuring out that I needed to glue the windows in
before adding the paper on the outside walls of the house. The plexiglass is inset into the walls and once the paper is added,
it covers over the window pane a tiny bit.
And then the Outer Frames are glued over the paper edges,
holding the pane firmly in place.
Here I have glued the windows into the end wall
of the removable portion of the house but not the front.
I wanted to test the glue before gluing them all!
I am using Aleene's Quick Dry Tacky Glue. 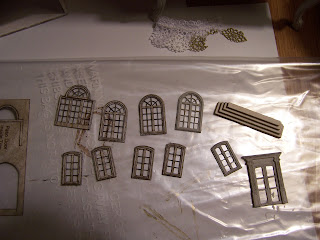 And here I have painted primer very carefully
on a couple of the frames.....
Although it is really hard to tell!
It is Not easy to get the primer onto
all the crossbars and muntins! 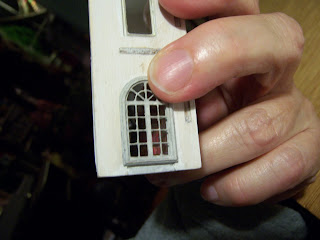 Here I am testing the window frame before the paper is glued in place. 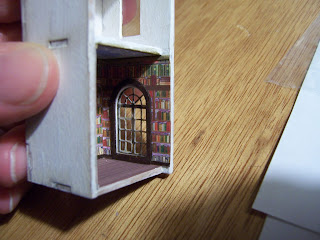 And the view from the inside....
which is where I realize I have a problem!
This is the one window, Dear Readers,
where I should have left the edge of the window opening
dark brown to match the frame! But it is white,
so I should probably paint the reverse side
of all the crossbars and muntins white like the front.
All the other rooms will have white trim
so this will not matter with those windows.

And while I am painting ceilings, I decided to add
the embellishment of a "gilded plaster rosette"
to the ceiling of the room above the "Salon",
which is supposed to be the "Dining Room" 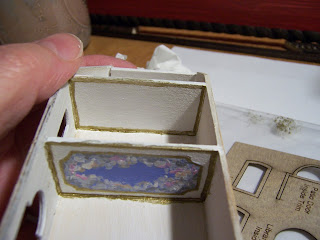 But first I had to paint the edge for the gilded cornice trim in this room too. 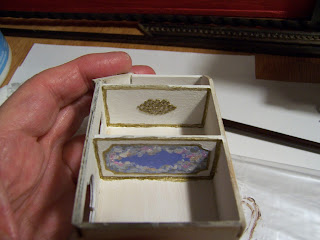 Here you can see the gilded "rosette" has been added.
It is a tiny bit asymmetrical.....
But you are not supposed to notice that!

Well, Dear Readers, that is as far as I managed to progress
last weekend, in spite of the extra days off for the Holiday!
At this rate the house Might be done by Next Christmas!
But I am making Teeny Tiny Progress....
One step at a Time!