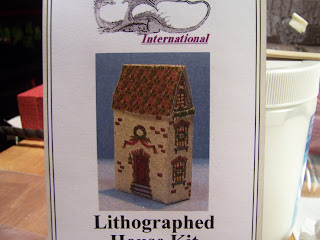 I hope you are Not Shocked, Dear Readers, to see an entirely different Tiny House kit featured in the above picture! I was pawing through my boxes of mini Christmas supplies, looking for something else entirely, when I found this kit I had bought a few years ago but never assembled. And if you are like me and are procrastinating from all sorts of more difficult tasks, then something as simple as this becomes Irresistible! There were hardly any parts, and they would go together so quickly! And best of all, the printed decorative papers that needed to be glued on would give me Practice in attaching these sorts of  papers to the constructed house! (And I was feeling a trifle nervous about gluing the papers for the Secret Christmas House kit!)

So I quickly assembled the parts
and forgot to take any pictures of the beginning.... 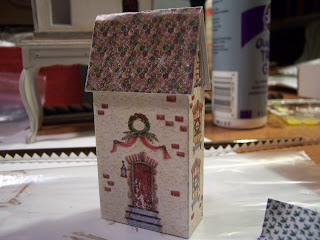 The entire House is less than three inches tall.
The kit is made by "Dragonfly International"
but I bought it through the Hobby Builder's Supply Catalog. 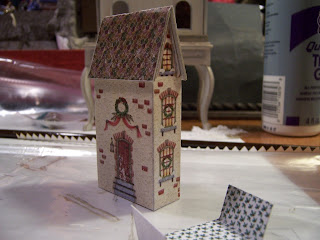 The laser cut wooden pieces went together quickly
and the exterior papers were simple to glue on.
But after that, Something happened..... 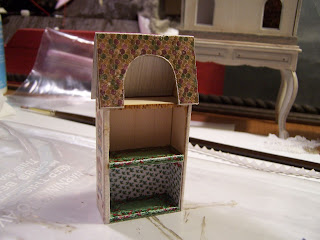 The attic was not supposed to be "accessible".
But I thought that would be a real waste of space!
So I cut an arched opening in the roof paper.
And then I realized that the roof paper was not sturdy enough alone,
and would need to be stiffened with some cardboard...
(Which was easily accomplished.)
And then I realized that while there were two printed floor papers,
there was only one decorative paper for the ceiling....
but there were two ceilings....! 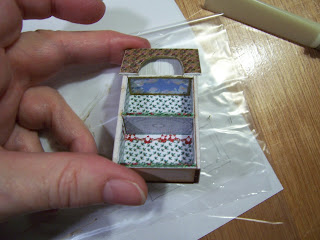 So you can imagine what had to be done to the unfinished ceiling!
(It did not take too long!) 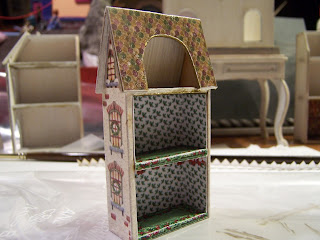 And because the middle floor fit so snugly in the house,
the printed wallpaper needed to be cut in half
and applied separately to each room after the floor was attached..
So there you see, Dear Readers,
I made only a few modifications to the kit!
And I had good practice with the gluing of the decorative papers!

Which made it much easier for me to feel confident
about the Secret Christmas House! 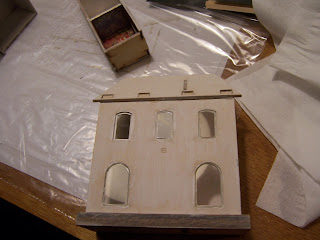 And because I was still stealing moments from all those other tasks on my list,
I decided it was time to glue the windows into the front of the Secret Christmas House,
since the interior side of this wall would not be decorated and so
I needn't worry about getting paint or glue on the window panes by mistake. 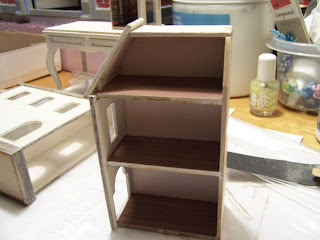 And then I glued the rest of the floor papers into the rooms.
Because the ceilings had all been painted
there was no risk of getting paint on the floors by mistake! 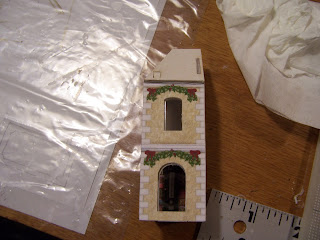 And then I went ahead and glued the exterior wall paper
on the right side rooms!
I had glued the window panes in last week,
and could not attach the exterior frames
until the paper was in place. 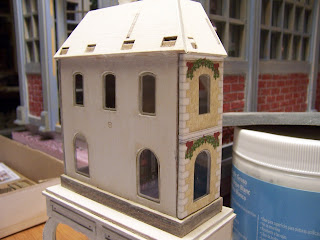 Here I am testing the fit with the right side in place.
And since that was looking so good...
it was time to attach the front wall papers too! 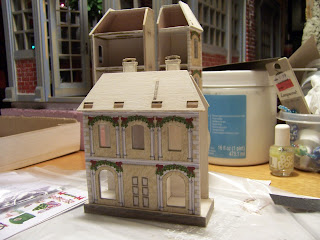 Here it is without the interior rooms in place.... 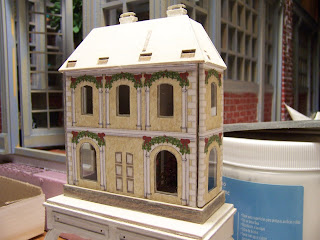 And here they are in place.
What a difference the papers make! 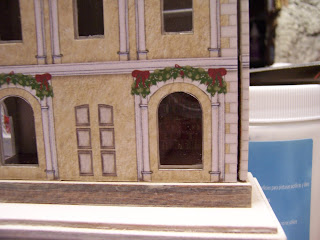 Here you can see a close-up view into the Library through the window!
I still have to paint all those incredibly delicate window frames....
but I figure that will take me quite a while and I don't want to rush. 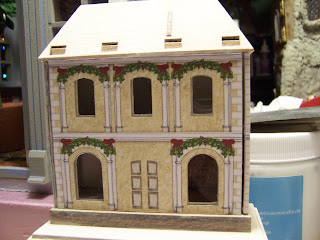 Well, I don't know about you, Dear Readers,
but I just couldn't resist stealing a few moments
to work on these Tiny House kits!
(And No, I don't have  Another one!)

Posted by Daydreamer at 9:56 PM