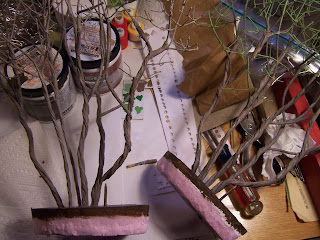 I must admit, Dear Readers, that after all the Turmoil and Drama that has been the dominant Theme on this Blog and my Life for the past few weeks, this post seems very very bland! I would be complaining that I had nothing at all to show you except that I spent the weekend (when I wasn't trying to put my RL house to rights) trying to get the Lilac shrubs stems completed before the paints I had mixed weeks ago dried up! You might recall that I am making four versions of the same Lilac shrub.... one for each of the seasons... so that The Folly Garden can continue to be a seasonally changeable photo venue for my mini worlds! Yes, I know it is an insane idea.... but that is what I am doing! The four shrubs are each attached to a removable section of pink foam which will insert into the landscape and can be swapped out as the seasons change! All I have to do is make the four shrubs as similar as possible in their basic structure.... Above you can see two of the shrubs with just the first coats of paint applied. I am using artists acrylic for the first coats.... treating it like a primer that will seal the paper stem wire without making the paper too soggy (which a wetter paint might do). 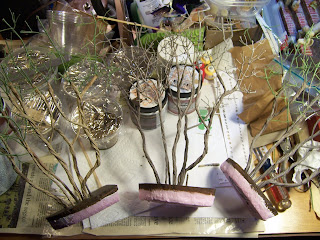 Here you can see three of the bases together....
the one on the left has not been painted at all,
the middle one has had all the stems and all the twigs painted,
and the one on the right has had only the stems painted.
I am focusing on the stems for now,
trying to get them all to the same level of completion
while I have the ingredients prepared! 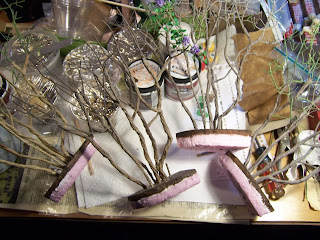 Here you can see all four of the pods  together....
the middle one is the one I had been working on
before the Story-telling mania took over...
and I had developed what I think is
a workable texture for the main stems! 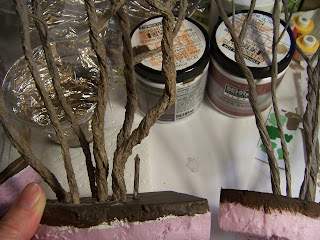 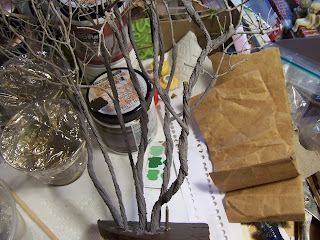 Here I have painted the stems with the flat latex house paint
with the texture additive mixed in.
It makes a very rough surface. 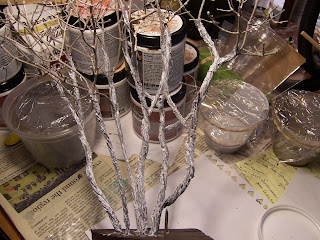 After that has dried, I cover the stems
with a thick artists modeling paste,
scraping textured lines into the surface
to give it a more bark-like appearance. 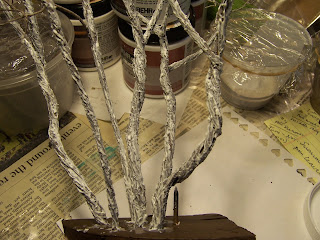 This takes longer than you would think!
Especially when you are doing it on four separate shrubs...!
So I didn't get to the painting part yet...
except for the first one which I am now trying to repeat... 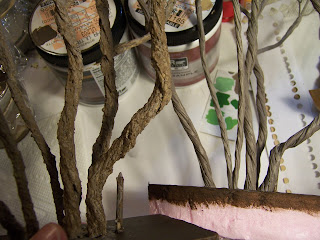 And which you might be able to see in this picture...
has the beginnings of bark "lines" drawn
onto the stems using a fine point marker....
only added at the base so far!
I think it adds a layer of definition
which hopefully makes it look more real.
Still a long way to go... but Progress has been made!
And lest you think I slacked off, Dear Readers,
and neglected my blossom-a-week program.... 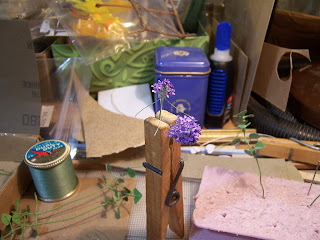 Here you can see the beginnings of blossom number Thirty-one..... 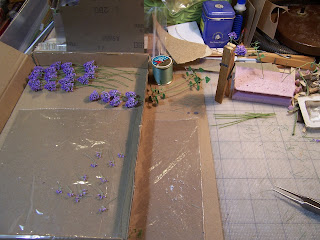 Along with all the pieces.... 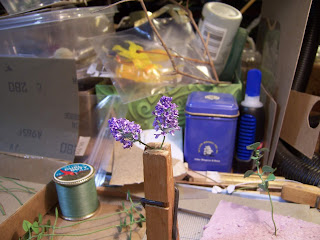 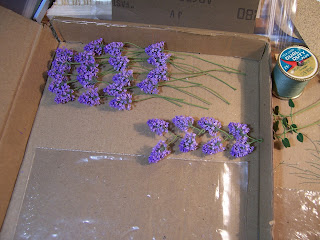 And in the box along with the paired blossoms
number Twenty-eight, Twenty-nine and Thirty....!
(There are already two paired clusters attached to the main shrub as well!)
I was planning to attach these clusters as I made them,
but realized I needed to get the stems all completed
before I went too far with attaching the blossoms....
so that the blossoms would not get damaged in the process.
Alas, I have fallen behind in making the leaves and twigs...
but once the main stems are finished
I will be able to concentrate more on the leaves.

And before I leave you, Dear Readers,
I want to Thank you for all your appreciative comments
on the Never-ending Tales!
I do get a bit carried away.....
and it is like a huge whirlwind
inhabits my otherwise peaceful mini worlds.....
just for a week or two....!
But the mini people do have a way
of insisting that their Tales be Told.......
I am just going along for the ride!
It is Wonderful that you are here to share it with!
And after the Tempest is over....
we are left with the blossoms and twigs...!

Posted by Daydreamer at 8:59 PM