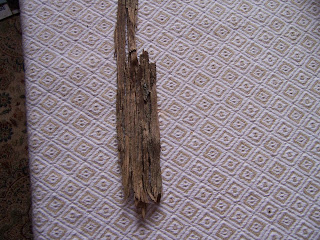 Still not being satisfied with my Lilac stems, Dear Readers, I snagged a section of the shedding bark from one of the RL ancient shrubs at work and brought it home just before Thanksgiving. I had some time off over the Holiday and wanted to experiment with an idea that had been teasing me for a long time. Above you can see the bark piece, in daylight, on my kitchen table. I have always thought that the oldest parts of the stems appeared lighter in color than the younger parts. I wanted to compare my shrubs with the real thing! I think I see a lighter tan-gray color than I was getting on my last paint layers. But more than that, I see the flaking texture of the bark itself, and so far I had not achieved this with the texture on my Lilac Stems. But I had an idea that was just begging to be tried... 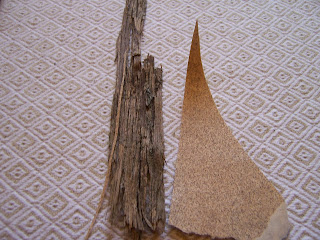 I kept looking at a scrap of sandpaper that was lying on my worktable,
and thinking that maybe I could cut thin strips of it
and attach them randomly to the Lilac shrub stems...?
The color by itself was close,
but too monotone.... it would need painting.
(Do you see the narrow strip of cut sandpaper lying on the piece of bark?) 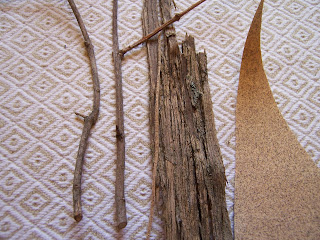 And here are my trusty lilac twigs too....
(Just for color comparison...
because the twigs still need painting too.) 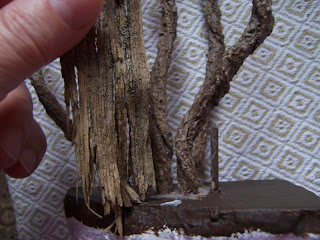 And the Real Life bark held close to the painted stems.....
the color is close, but I am seeing more tan in the real bark.
Clearly I needed to make some more layers on the shrubs! 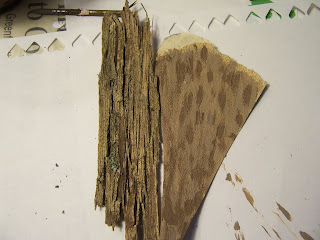 I painted the sandpaper in a mottled pattern...
trying to approximate the colors of the RL bark,
(but not worrying about precision because
it would be cut into tiny strips.) 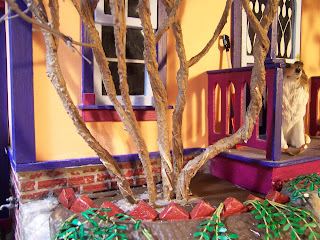 Then I tested adding strips of the sandpaper to one of the shrubs.
I had decided that a cut edge was too artificial,
so I needed to crease and tear the sandpaper
into very thin strips in order to get a raggedy edge.

And because I was still just experimenting, I didn't take many pictures.
Meanwhile I was also painting the rest of the "twigs" on the unfinished shrubs.... 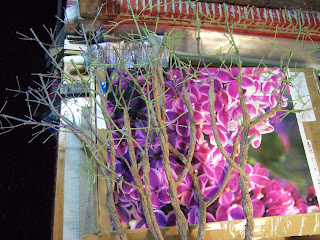 And believe me, this takes a very long time! 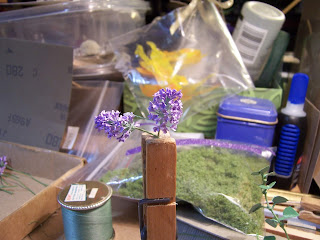 And I was also completing blossom number thirty-three! 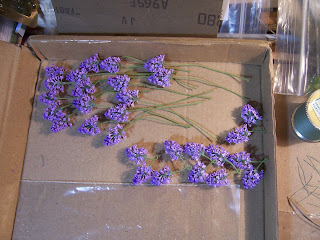 And here it is in the box with its buddies....!
But it was the bark that I really wanted to work on, Dear Readers,
to see if I could make the stems look as
old and raggedy as the ones I was trying to copy! 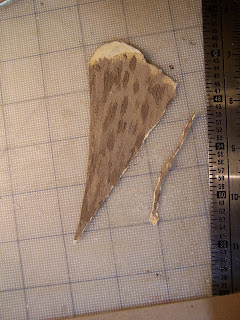 Here you can see one of the strips torn from the sandpaper.... 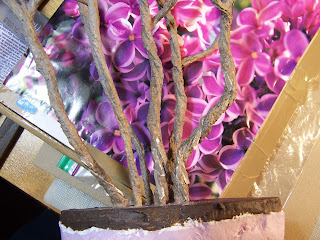 Here you can sort of see them attached to one of the shrubs...
The shedding pieces are all near the bottom of the oldest stems...
the newer bark is not shedding.
And I needed to copy this on all the four shrubs! 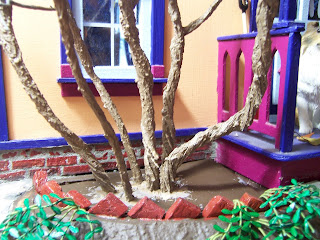 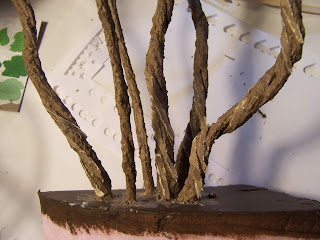 But the white paper edges needed to be painted....
and another lighter layer of color needed to be added to the stems overall,
and to try to blend the shaggy bark seamlessly with the stems. 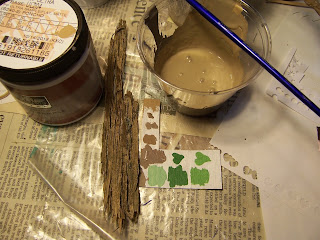 So I mixed more paint.... staying on the lighter side....
because it dries darker than you think it will!
This mixed color when dried is the dark blob on the
bottom left corner of the sample test-card.....! 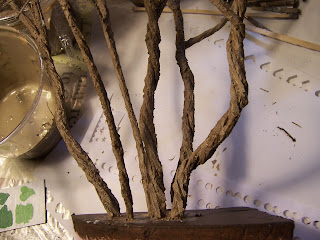 Here is one of the shrubs with the sandpaper painted that lighter color....
(hard to tell it is a lighter color!)....
but I am really liking how this is looking!
It adds just enough more of a three dimensional texture to the shrubs! 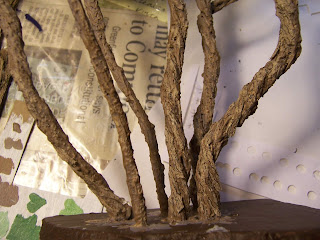 But there was one more layer of
detail I wanted to add, Dear Readers,
and that was very fine ink lines
to simulate the cracks in the bark....!
Above you can see I have added them
to the stems on the right, but not yet on the left... 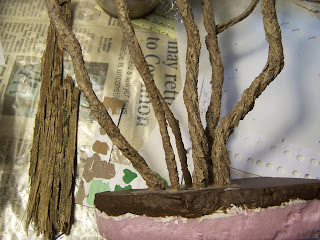 And again, with a comparison with the Real Life Bark sample....
Ohhh, I think I have nearly got it!
(You might have to poke the pictures to really see the details!) 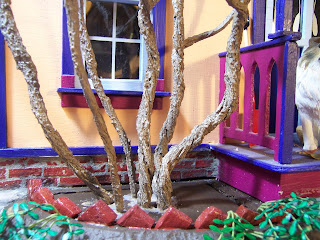 And here it is again, in place in The Folly Garden...
All I have to do is draw those bark lines on all three other shrubs too! 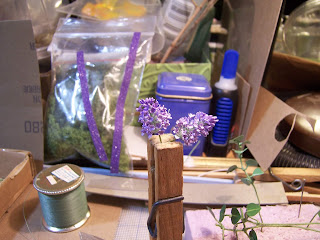 Meanwhile, Rest assured I was not forgetting blossom number Thirty-four! 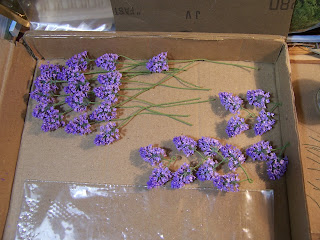 And here it is waiting in the box!
The shrubs are almost at a point
where I can begin to safely add the
completed blossoms to the stems!
(But I am way behind on my leaf-making....
so it might be slower than I think...!) 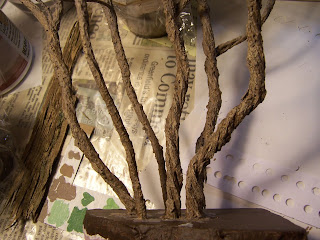 I have to admit, I am very pleased with my shaggy bark!
And while I can't promise there will be no more
layers of paint on these shrubs, Dear Readers,
I can say I think my Lilacs will bloom
splendidly in the Spring!

Posted by Daydreamer at 9:14 PM