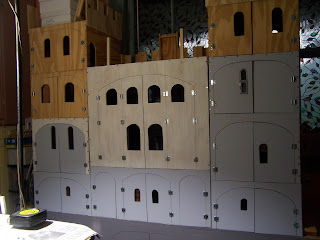 You Might not notice much difference, Dear Readers, but to me it looks like progress, albeit small and slow progress, is being made on the Castle. To begin with, I have added primer to the front doors of the Great Hall. This was time consuming because we are in a very wet and humid time right now (we have had ten or more inches of rain in the past three weeks!) which makes paint very slow to dry. Add to that the need to not let the doors with their beautiful hinges and recent careful buttressing get out of alignment by disassembling them entirely. I wanted to keep the hinges clean of paint, but keep the same hinges at the same position on the same door section, so I only removed half of the screws at each section in order to paint or primer the wood before reattaching it and then doing the other half. I know this sounds ridiculously complicated.... and it was very time consuming. 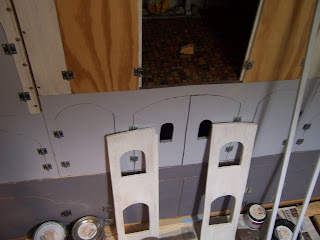 Here you can sort of see what I mean...
the hinges are only removed at one side at a time
so they essentially keep their exact location on the doors.
And both sides of every panel needed to be primered, then painted.
The interior has been given the first coat of gray paint... 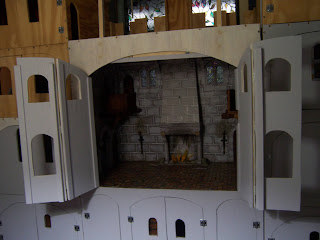 It is amazing to me how much difference the paint makes
in the "illusion" that this is a rocky castle wall!
I am not yet painting the rock details on the exterior,
because I am not sure what the final surface treatment will be!
But for now, watching the Castle gradually turning Gray
from the golden wood color is a sure sign of progress!
But the really "Rocky" road I am traveling right now
is the work on the junction of the Great Hall ceiling with the walls.
I showed you the beginning of my "adjustments" last week.
But to really make progress the ceiling needed to be removed
and the walls needed to be prepared
for gluing the new "rock beams" in place. 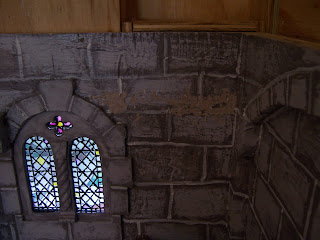 Of course, while I was working on this I took some pictures,
but they are not very well lit... (All those rainy days....!)
I had to scrape away the textured wall "rock" surface
I had added originally to the great hall. 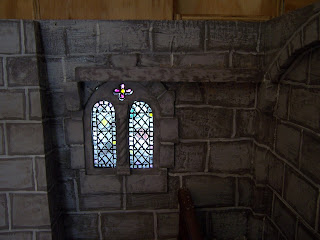 Here I am testing the new support beam in place.
As I mentioned last week,
it covers part of that lovely window detailing...
But there is no way around that!
When I first made these windows, back in 2011,
I had not planned how the ceiling would connect
and how deep the arch would need to be.
And now my retrofitting is fiddly at best and really rough in the end. 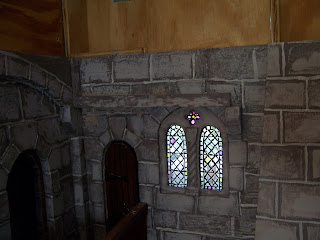 Here is the other side over the Ladies' Gallery.
Of course, the two sides are different ....
but the windows themselves are close to identical.
I decided to add another "stone support" on the other side of each window.
The first one holds the ceiling arches,
but this second one will just be to make
the window appear to be set into the wall more deeply. 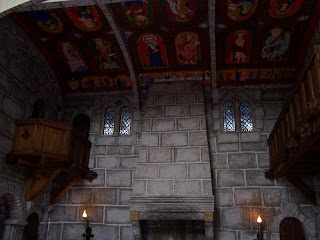 Of course, it is nearly impossible to see what I mean
with out better lighting... 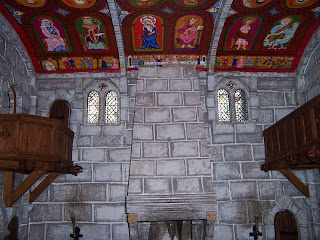 Here I have used the flash,
but it really erases the  sense of depth
that shadows produce... 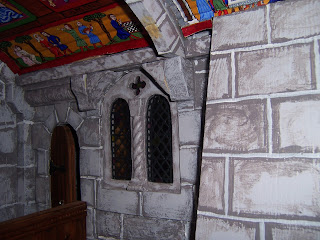 Here is a closer view. It is still far from finished...
I have a lot more "Rocks" to add....
But the upper edge of the wall is starting to look
like it is able to support that ceiling... 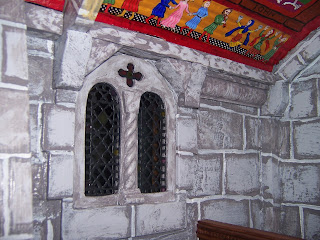 And if the window surround is not
as delicate and pretty as before....
it is probably more authentic...
crude and roughly cut rocks
are just holding up a massive ceiling!
So you can see, Dear Readers,
it is a long and Rocky Road....
but Rock by rock,
I am making good Progress!

Posted by Daydreamer at 8:00 PM