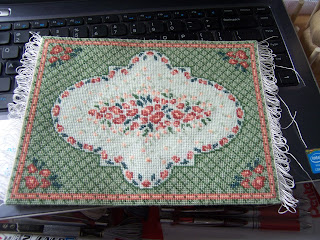 I Finished the Fringe on Sally May's carpet, Dear Readers, and I think it does "finish it off" rather nicely! And then I trimmed all the loops too... and then forgot to take a picture in the lovely sunny morning light. So you will have to put up with the gloomy evening shot instead. I need to clean up in Sally May's living room before we have any pictures to show of it in place. But it is good to be able to call it finished now! 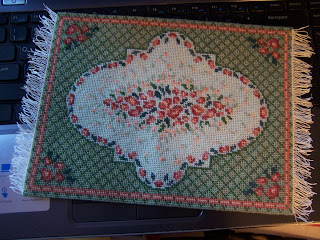 And as for the current stitching project,
I suppose it would be asking too much
for me to leave the pattern just exactly as it is in the instructions. 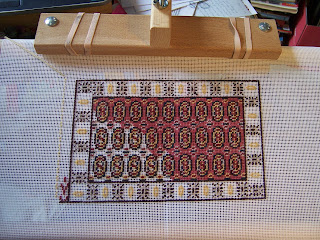 I was making great progress with stitching the
first border that surrounds the central section.
I had completed all the little ovals and started the
dark "spiderweb" around the white ones.
These will also have the rose color for the background.
The gold ovals will be surrounded by
the "spiderweb" in the dark blue color.
I was having a problem with the way it would look....
the dark blue and the dark mauve (chocolate almost)
colors are really hard to tell apart. 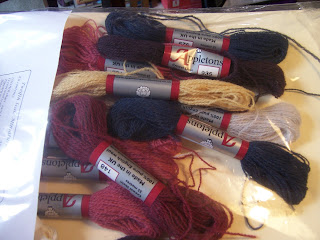 These are the yarns...I love the colors, don't get me wrong...!
But I thought the border was going to look
a little "lack-luster" with just these colors.
And I wondered if I could just add a little bit of zing into the pattern
with another color altogether...
perhaps a lovely sky blue....? 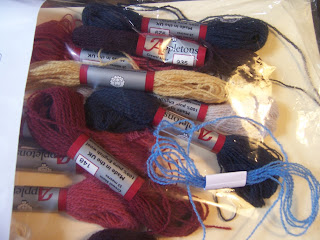 Which I had a little bit remaining from another of Janet's kits.... 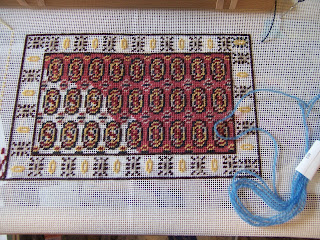 I wouldn't do anything Drastic...!
Just maybe add the blue into the center of some...
not all... of the golden ovals...? 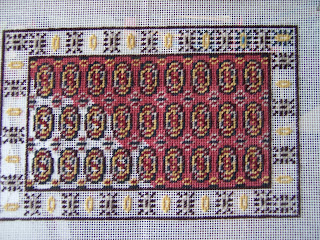 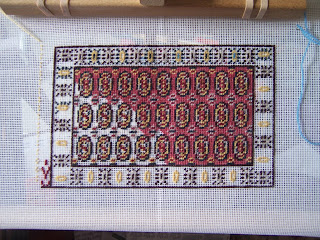 Perhaps just every other gold one?
And would I be able to tell if the rose color was not there yet...? 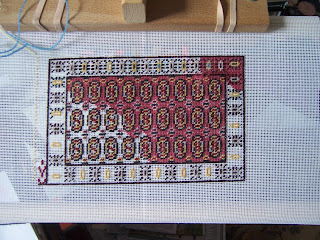 It always amazes me how much the appearance
of a color is altered by the adjacent colors!
The rose color of the center is the same
as the rose color of the border,
but the border has more of the dark colors
mixed into the pattern and less of the white...
so it appears to be a darker shade of rose (at least to my eye!) 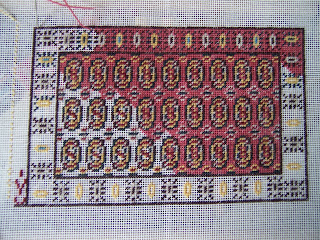 As I am sure you have guessed, Dear Readers,
by the time I have stitched enough background
to know whether or not I like the change,
it is way too difficult to unstitch the blue bits!
But fortunately, I have decided that I like the alteration!
Yes, the blue is not expected in this carpet...
but I think it does add that tiny bit of zing I was looking for.
It is a subtle change, and in some light will not even be noticed...
but I will know it is there! 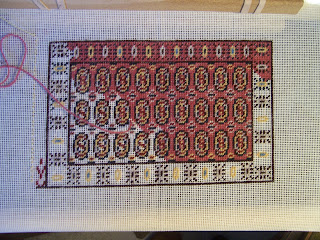 And of course, I will now have to deal with
the temptation to just sneak a few more blue dots
into the other sections of the border pattern...
which have only just been started on the lower left corner.
So you see, Dear Readers,
I still have more carpet details to stitch,
And I might not be done with the alterations,
But I sure do love playing with color!

Posted by Daydreamer at 8:31 PM