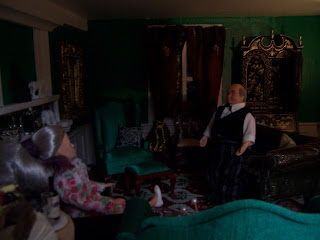 You may recall, Dear Readers, many other Thanksgiving Dinners at the Lovely Old Dollhouse, all with the same dinner and the same guests and very little variation! But I beg your patience with this Tradition that comes around, ready or not, and needs it's moment of glory. This year Helen was astonished to realize that dinner was going to be late. Quite late, in fact! "Goodness!" she declared to Charles. "Look how dark it is already... and Sally May hasn't even arrived yet!" she added anxiously. "Do you suppose something is wrong?" "No! Don't worry!" declared Charles, knowing that Helen would worry no matter what. "It's just that Chip had a late job he had to finish, and Annabelle was napping, so they are running a little late." "But they should be here any minute!" he added. "But what about the dinner...?" said Helen, starting to fret. "Won't the Turkey be over-done?" she added. "Joanna assured me she was able to put off the schedule a little bit." he said. "It sure smells good!" he added. 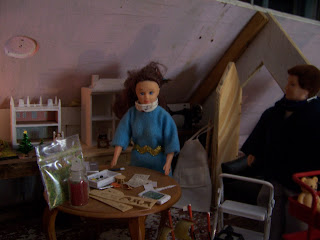 Meanwhile, up in the attic, Pollyanna and Arthur
were keeping "out of the way" of the kitchen.
They knew that too many cooks spoiled the broth!
But even so, the aromas had reached up to the attic.
"Do you think it's ready yet?" asked Arthur. (He was hungry!)
"I think they will call us when it is time." said Pollyanna.
"But it sure smells good!" She added.
"I haven't heard Sally May and Chip arrive yet either." 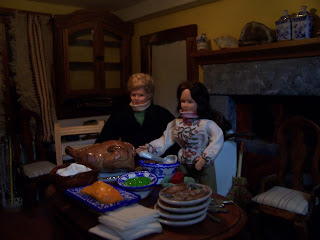 And down in the kitchen, Joanna and Victor
were just taking the Turkey out of the oven.
It looked like everything was ready... except that
Sally May and Chip and Annabelle still hadn't arrived! 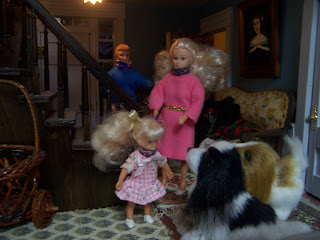 But just then they heard a commotion in the Front Hall.
The puppies were greeting Annabelle and making a great noise! 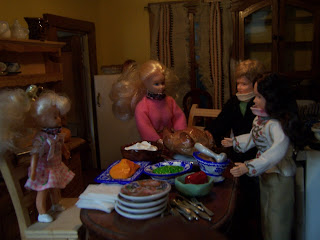 Sally May and Annabelle headed straight for the kitchen.
"I'm sorry we are so late..." she said. "Annabelle just woke up!"
"And Chip had to finish that job...."she added.
"But let me help you get everything ready!" she declared happily. 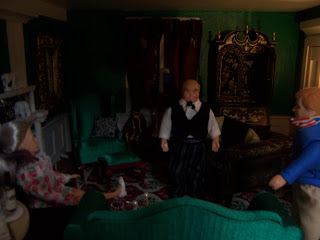 "Sorry we are so late!" Chip was saying to Helen and Charles.
"Are your folks coming too?" asked Helen.
"They said they would be right behind us!" declared Chip.
"It sure smells good!" he added cheerfully. 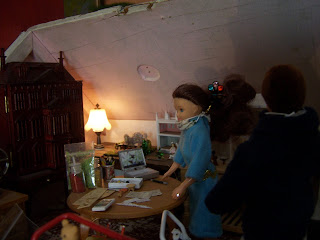 Meanwhile, up in the attic, the noise of the arrivals was unmistakable.
"I think we should go down now..." said Pollyanna.
"We don't want to be Late!" said Arthur grinning. 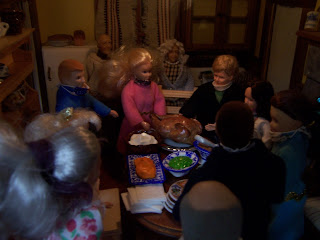 And sure enough, Ernie and Blanche, Chip's parents,
arrived a few minutes later.
Everyone was gathered in the kitchen at last!
"The Turkey looks wonderful, Dear!" said Helen to Joanna.
"And smells even better!" added Charles! 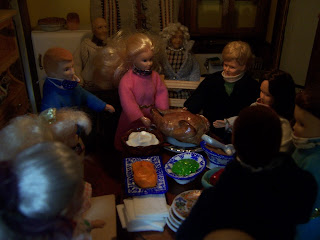 Well, you know what happens next, Dear Readers!
Yep, its the same menu as always!
Roast Turkey, Mashed potatoes, Butternut squash,
cranberry jelly and gravy... oh, and buttered peas too.
And for dessert Apple and Pumpkin pies!
And did you know, Dear Readers,
all those foods, with the exception of the apples and peas,
are Native to the American continents.
A fitting celebration of the bountiful Harvests of this Land!
I hope you all enjoy a wonderful day,
whether you are Giving Thanks or not!
Happy (almost late!) Thanksgiving!
Posted by Daydreamer at 6:55 PM