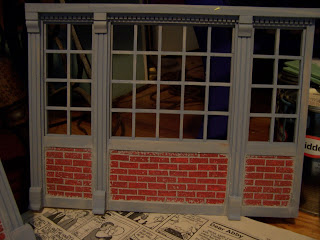 Well, Dear Readers, I feel as though I am a "stuck record" (Boy does THAT saying ever Date ME!)... when I say I have very little to show you this week! But I will Dig deep and find something...!
I did manage to add the grout to all those Lovely bricks on the Future (supposed to be Distantly Future...) Conservatory Project! And I added the "glass" roof to the framework.... 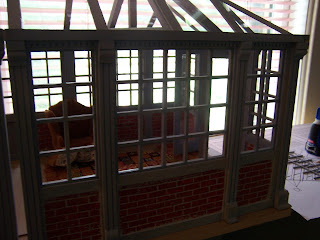 Which you can hardly see in this picture....
And had to start Fantasizing about the Future Interior Decor....!
But on That I will say no more....!
Because it is supposed to be a long time in the Future project!
Meanwhile, those Patient Saints Increased their membership....
By One Ghostly underpainting..... 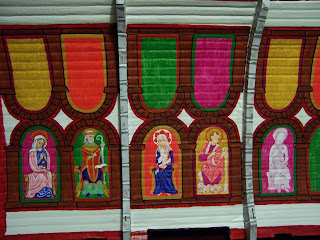 And a few Details on the others.
But still None of them are Done!

And having received so many flattering comments about the Saints in my last post,
I thought I would show you the Original Manuscript Illuminations
I am using as models for my paintings ...
so that you can see how far I have yet to go!
To begin with I will mention that the "Story" behind my Castle is that it was originally an Abbey that was abandoned and ultimately taken over by a Noble Lord who made it into his Castle. Hence it has a much richer than usual adornment in the Chapel and in the Great Hall as well. I am trying to have the Saints all painted as though it were done in the Twelfth or Thirteenth Century, so the style of the figures would be relatively primitive. I am not being able to find good versions for all of them from such an early period, so I am making "allowances" to stretch historical accuracy. Also, I will mention that it is really difficult to paint in a "style" more "primitive" than your own!
The Saints I have painted so far are (from the left) St. Elizabeth, St. Amand, St. Hedwig, St.Mark, and the ghostly one is St. Mary Magdalene.
For the Figure of St. Elizabeth I chose a very small decorated initial from a Gradual from the Dominican Convent of Katharinenthal, Lake Constance, from about 1300. 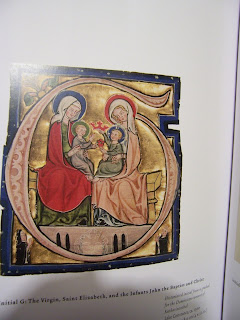 (It is very difficult to photograph glossy pages without the glare....)
You will hardly recognize my painting from the above figures!
To begin with, I turned Elizabeth to face the other direction.
Then I removed John the Baptist from her lap.....
and replaced it with the Roses and Lilies inside her cloak... from one of her legends.
My figures have nowhere near the grace of the originals! 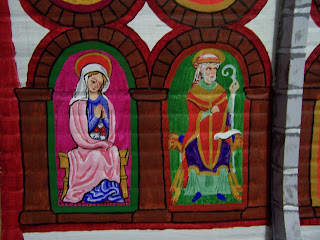 And I didn't even do a very good job of replicating the folds of her garments!
I was a Little more precise in copying St. Amand.... 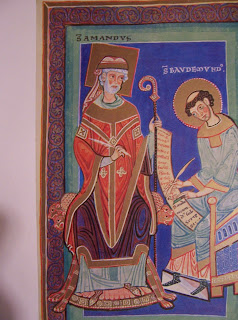 This is from the Vie De Saint Amand from Valenciennes
in the second half of the Twelfth Century.
Even so, it is really difficult to replicate the angular and linear style of the original.

For St. Hedwig I have chosen an absolutely Gorgeous Illumination from the
Vita Beatae Hedwigis from Silesia, 1353.
This is later than my theoretical time-frame,
but St. Hedwig was only made a Saint in 1267!
But you can see how much the style of painting had changed
from that of the earlier paintings. 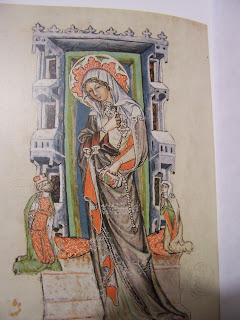 This one I will not come close to succeeding.
To begin with, I made her seated. All the Saints are seated.
(So they fit in the Windows!) 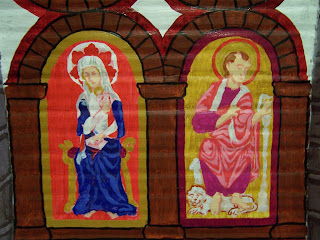 Secondly, I have altered the colors of her cloak from the subtle greys to the vivid blue....
I can only attempt the delicacy of her hands and face....
(you can see why it takes me so long... I have to work up the courage to Try!)

As for St. Mark, once again, I am trying to be true to the original.
This is taken from the Odolricus Peccator Gospel Lectionary.
This is from the Ottonian Empire, early Eleventh Century. 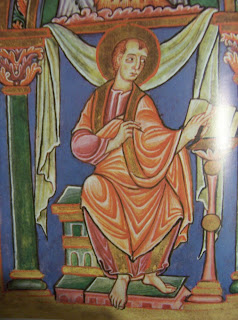 You can clearly see the more primitive linear forms.
But I have put his Lion at his feet instead of overhead as in the original.
And I have altered the colors of the ground. 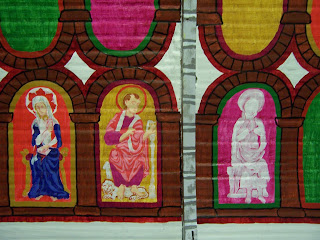 As for the Saint Mary Magdalene,
I will have to show you the source for her once I have done more than the
ghostly underpainting!
But I can already tell you that she does not resemble her original very closely!
And there are still so many details to paint....
as well as Seven more Saints to Discover....
So that is all I have to show for this week.
You have the Grout and Paint...
And Maybe a Little More Saintliness!
Posted by Daydreamer at 10:51 PM