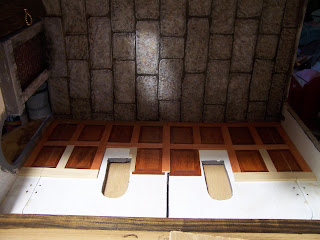 There Were Only a few more pieces of rails and stiles to cut for the paneling on the opening wall of The Dollmaker's Studio, Dear Readers, but they required much more patience than the others because of the opening doors. The panels just barely fit so that the central stile would span the crack between the sides when the doors were closed, but this meant I had to glue pieces on more carefully and align them around both the windows and the cracks in the doors. Above you can see the main pieces cut but not stained or glued. 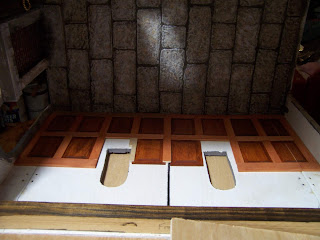 And here you can see the stain has been added.
I decided to glue all these pieces in place
before trying to cut and measure the top rail for the middle section.
I needed the pieces to stay put in order to measure properly. 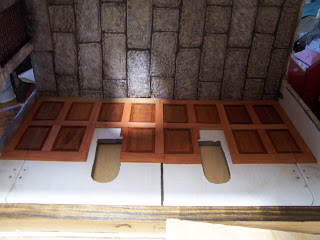 Here the top rail for the middle has been added. 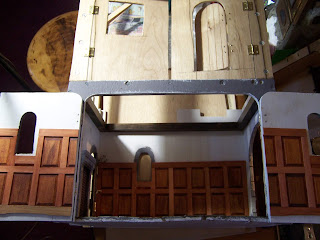 Here I am making sure the doors open properly..... they do! 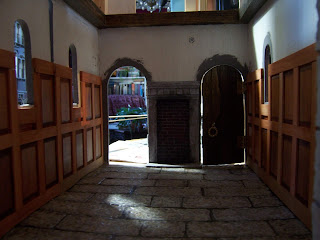 And the view through the arched opening... both walls are paneled! 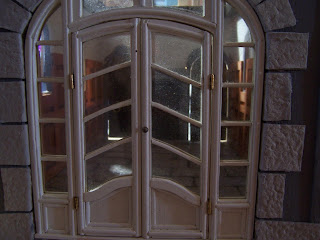 Testing with the arched door in place... those windows need cleaning! 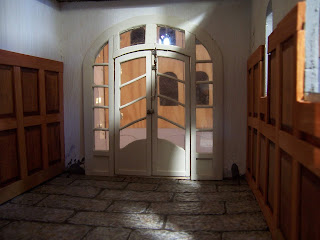 And from the other end..... this really is a very small room!
And I think I need to make some kind of paneling
for the walls beside the door.
But before I do that, Dear Readers,
I wanted to show you the other project I was working on
over my vacation a couple of weeks ago.
I had decided I finally had the time to make the floor tiles
for the Lord's Council Chamber in my Castle!
(It has only been about ....
I don't know how many years since
I really made any progress on that room!) 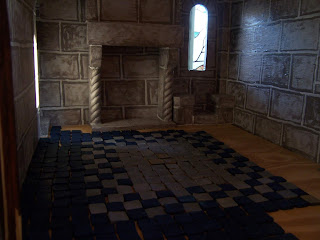 I dug out the sculpey I had bought....
all those many (seven, eight or nine?) years ago....
and discovered it was Almost too old and stiff to use....!
Almost.
With lots of patience and lots of kneading
it eventually became usable...
so I cut and baked tiles ...
one brick per day (all I could stand to knead)
hoping I had enough of the colors I had bought! 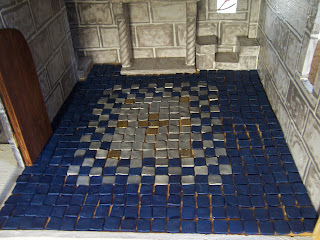 I had Just enough, if I also used a few remaining tiles
from the Conservatory floor... the gold ones in particular.
I wanted to make a pattern that emphasized the center of the floor,
rather than have an over-all pattern. 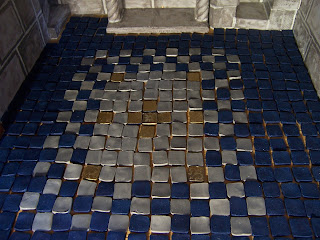 The gold tiles were a "mistake" I made years ago
when I was making the tiles for the Great Hall Floor.
The final step was to spray varnish over the painted patterns of the tiles....
I grabbed the gold spray can and only realized my mistake
when the tiles were turning gold before my eyes!
In the right light you can see the painted designs through the gold.
I liked the effect and saved the tiles...!
I think they work for this floor. 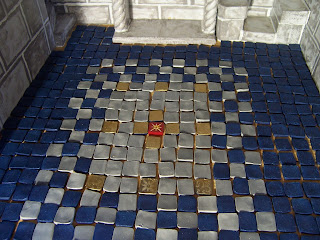 Then I added the Red Star Stone to the center...! 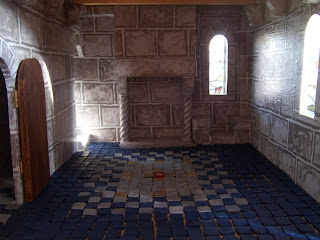 I think it is important to test these ideas in varying light....
Morning light adds a beautiful feeling! 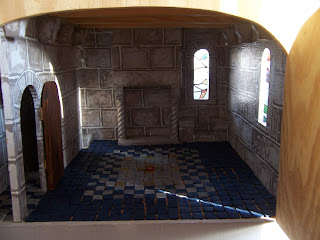 And the next morning I like it even more!
(I can't tell you how long I have been dreaming about this floor!)

But it still needs some more embellishment....
(I do love lots of detail!) 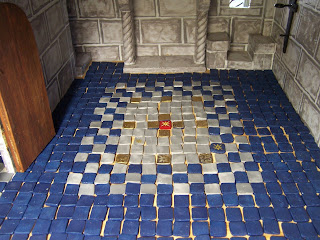 I had always wanted it to have more stars in the pattern...
So I started painting some of the tiles with gold stars. 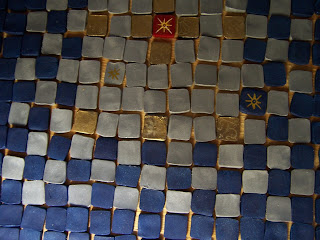 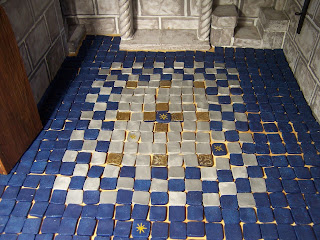 And then just to be Sure I was happy with the Red Star Stone,
I swapped it out for a blue one...
I definitely like the spark of the red one!
(And it will have a power role to play... you will see!) 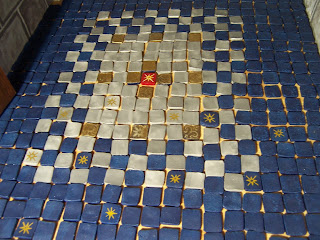 So I kept adding a few gold stars scattered over the floor... 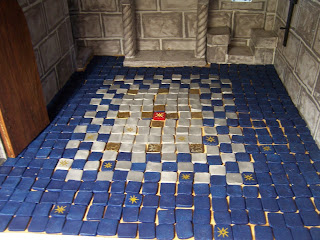 I will be adding a few more!
But that is as far as I got, Dear Readers,
While I was waiting for the glue to dry
on the Paneling for The Dollmaker's Studio!

Posted by Daydreamer at 8:55 PM