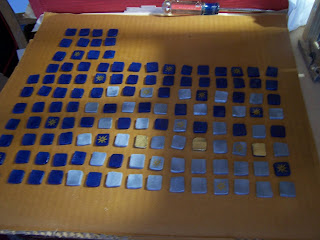 One Thing Leads To Another....

I had some Unexpected Time off from work, Dear Readers, while they sanitized the building where I work last week. It was supposed to be a day at home and then back to work, but it turned into three days at home due to the thorough nature of the cleaning. And since the weather was mild and virtually windless, I decided it was the right time to spray polyurethane varnish on the floor tiles which I could do outside on the porch. This required that I remove all the floor tiles, while keeping them in that perfect pattern I had so carefully arranged! You can see above a portion of the tiles spread out (in their exact arrangement) on cardboard so I could take them outside and spray them. 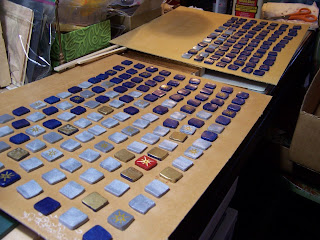 Pretty soon my entire studio was spread out with the drying tiles!
(This is only two of the five cardboards!)
I gave them two coats of the polyurethane. 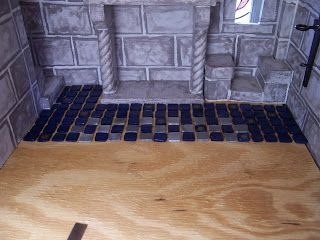 And the following day I began the process
of carefully spacing them in the floor...
with the allowed spaces for grout.
This ended up reducing the pattern by two rows of tiles
so I simply left off the outside rows of my pattern. 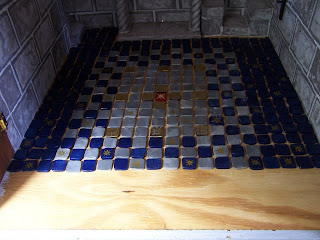 It was important to try and get the spacing just right.
I occasionally swapped out a thick tile for a
better shaped one as long as it was the same color.
And I needed to make sure the door would open over the tiles. 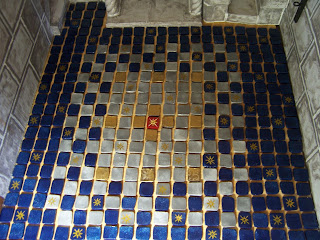 And once I had them all laid out correctly,
I could begin the gluing process. 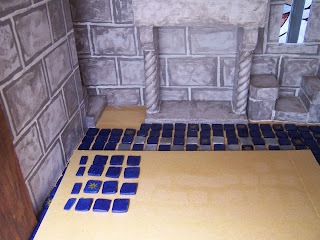 Once again, this required removing a small amount of the tiles at a time,
keeping them in their pattern, and gluing them back into their place.
Once I had done the corner by the stairs,
I could work the rows all the way across one row at a time. 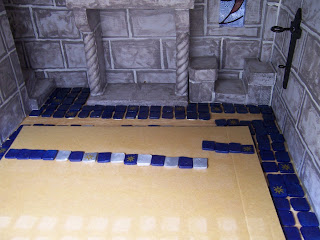 I would remove the next row tile right after gluing the one above it,
ensuring that my spacing stayed as unchanged as possible.
I wouldn't want to get all the way to the front row
only to discover that there was not enough space for the entire tile to fit! 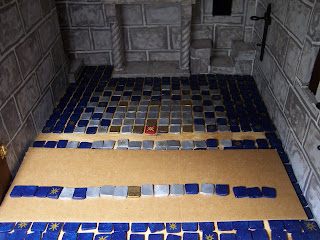 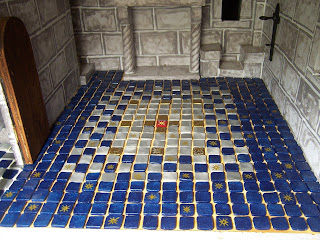 But I got it done! 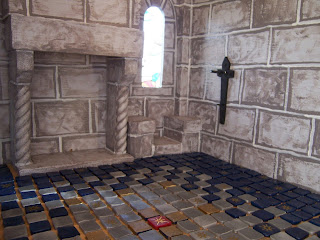 And in the morning light they look clean and sparkly!
I couldn't wait to get started on the grout!
But then I remembered that before I could grout,
I needed to complete the fireplace and attach it in place.
"What, the fireplace isn't finished" I hear you say?
No, I had always thought it needed something more... 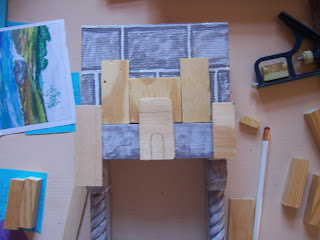 Ages ago, I had seen in one of my Medieval History books
an elaborate Medieval mantlepiece that was carved to resemble a castle....
or perhaps I dreamed this, because I could not find the photo again when I searched!
But the idea stuck, and I began to try to piece together a version for this fireplace.
I dug through my box of off-cut scraps.... 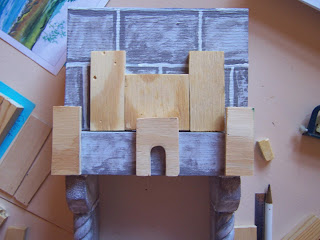 I found some likely pieces that needed almost no trimming to fit!
(This is Why we keep all those scraps....!
I could not have designed this as well
if I had to start from nothing!) 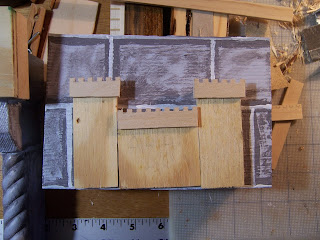 This too, took longer than I had thought....
I had to cut all those crenelations!
I used very thin 1/8 inch plywood because the crenelations
would never have survived the cutting
without the added strength of the plies. 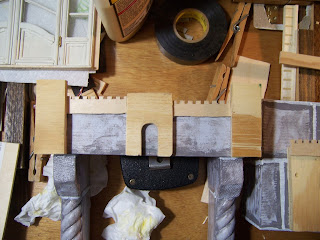 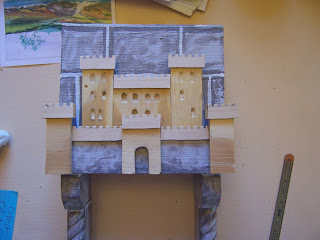 And then I had to carve those windows....
because I wanted the Castle Keep to resemble the Dollhouse itself!
(Without the outer walls, you understand...!) 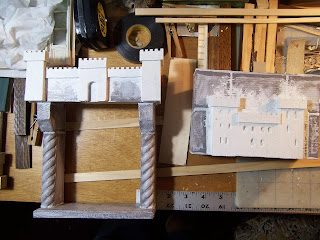 Painting with primer was next....
I know, it is really rough and not very stone-like.
But the same could be said for the Entire Dollhouse Castle!
(Imaginations are required!) 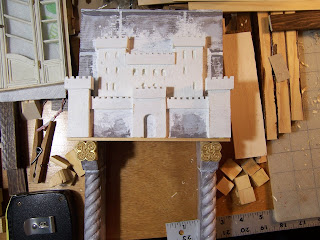 And then I decided that the base of the castle
needed a little reinforcing....
And decorating...!
I found these bezels hidden away among pieces
that were planned for this room ages ago! 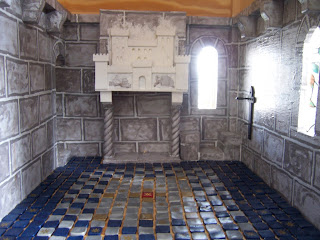 Meanwhile, it needed to be tested in place....
the primer is much too bright...! 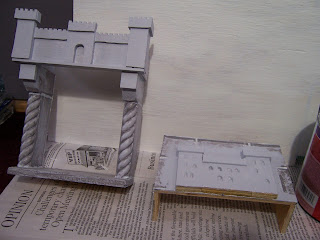 Painting the under layer of light gray paint... 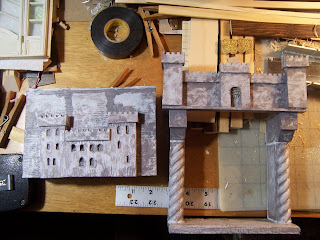 And then roughing in some of the darker "stone" colors....
highlighting the shadows and depths. 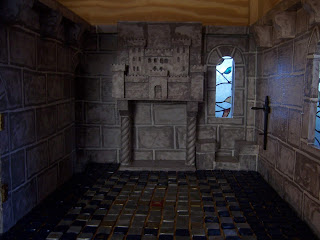 And seeing how it looks.....
Sill not quite finished...!
But that is as far as I got on my
extra days off and the weekend too.
One Thing led to Another
and I made a lot of Progress!

And on the Home front, Dear Readers,
my workplace has set me up to work mostly from home. 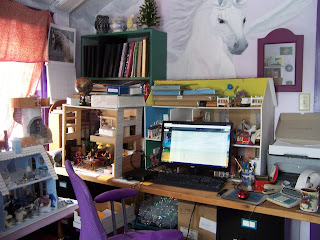 My workstation is tucked snugly in
among my upstairs dollhouses....!
The commute is very very brief!
I hope you are all staying as safe and Well as you can.
I am eternally grateful for the internet
and the ability to stay connected
with loved ones Near and Far!

Posted by Daydreamer at 9:03 PM