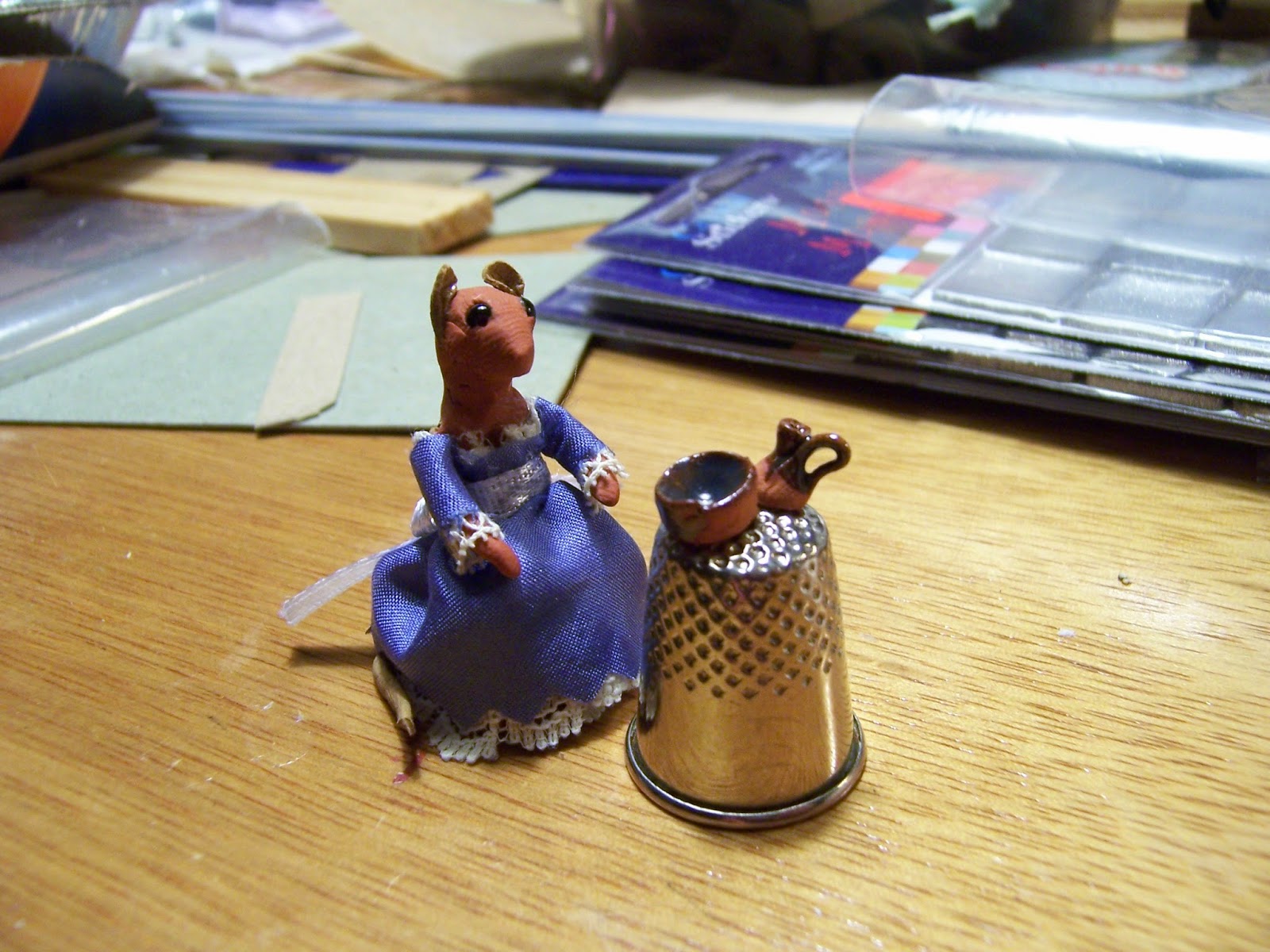 The Tiniest Ceramic Dishes Ever......

While I was visiting my Mother, Dear Readers, she gave me a few "little things" she had come across at the Thrift Shop where she volunteers. One of these "little things" was a plastic envelope with some Teeny tiny ceramic items inside. They were so small that it wasn't even clear What they were until I looked Really REALLY closely! Here you can see them in the bag.... I didn't even open it until I was home because I didn't want to risk losing any pieces. 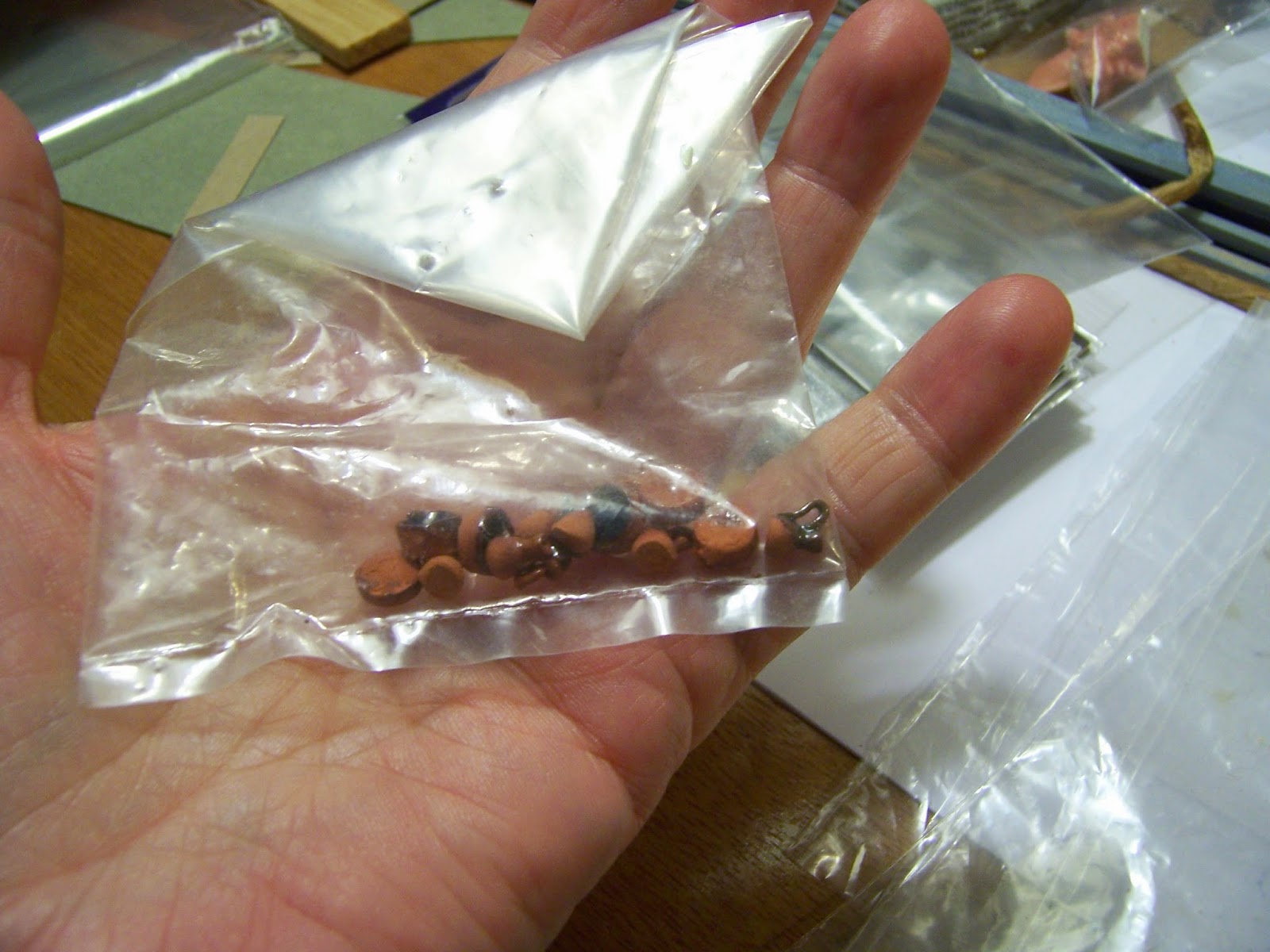 They are So much More Beautiful than I even thought possible...
and tiny beyond belief! 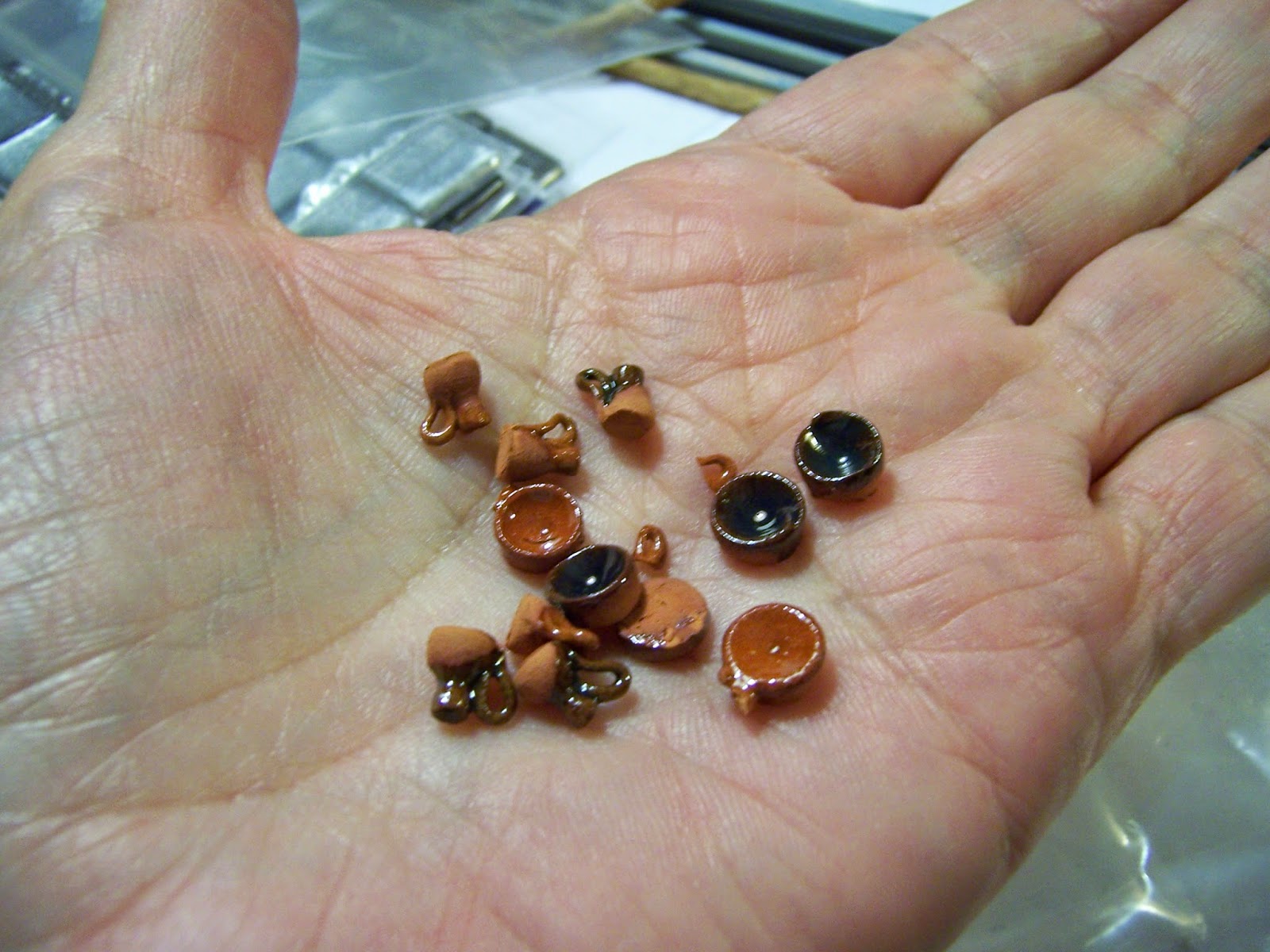 Can you see all those little jugs with Handles??? 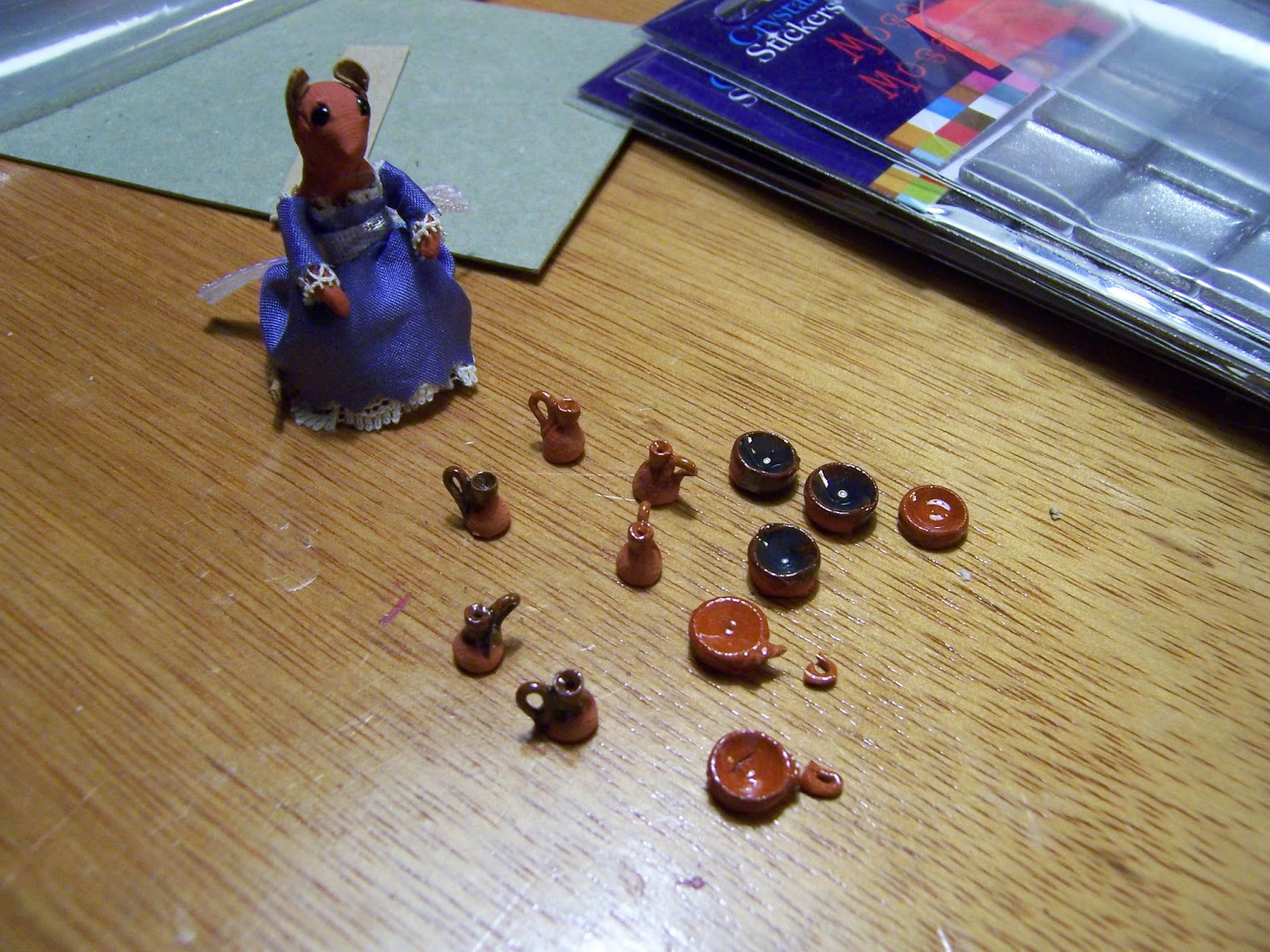 Only two of the dishes had broken handles....
I am sure I can glue them together again.
As soon as I had spread them out, Anna Maria came to inspect them....
She thinks they are Perfect for the Tree House! 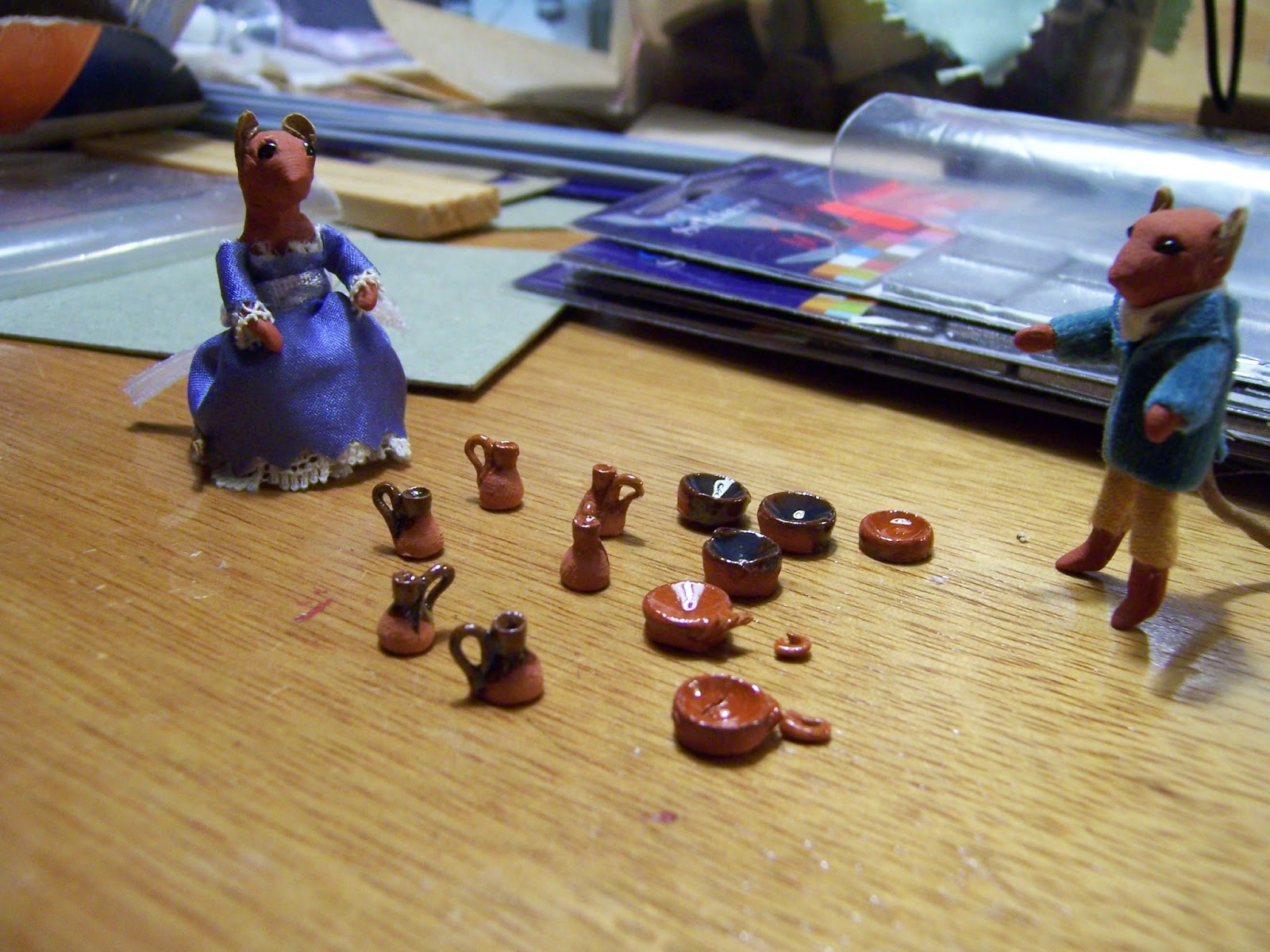 Samuel Whiskers was very impressed...
and decided to start to carry them back to the Folly. 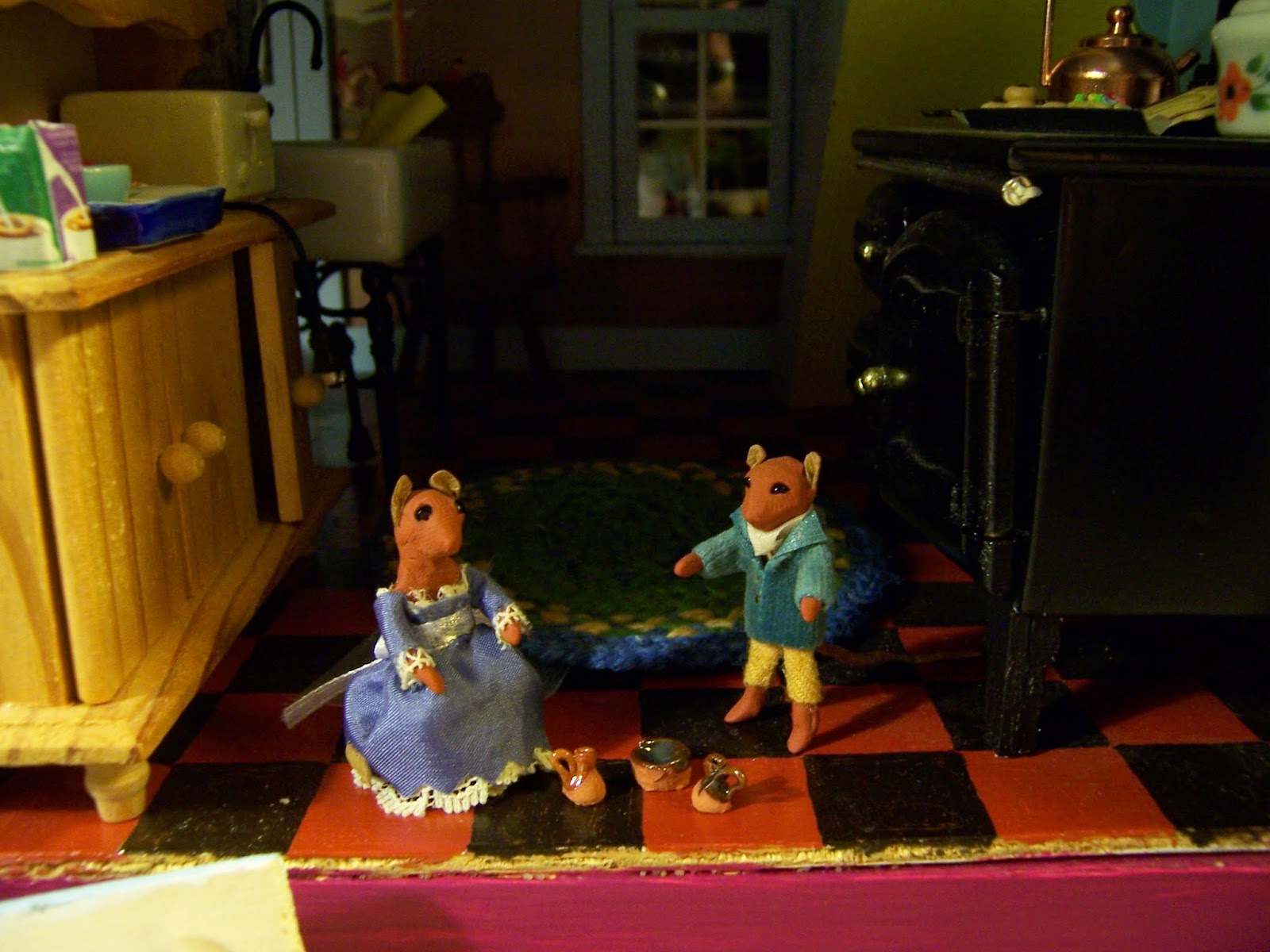 They could only carry a few pieces at a time.....
And all that rustling woke up the little dolls in the Book Nook. 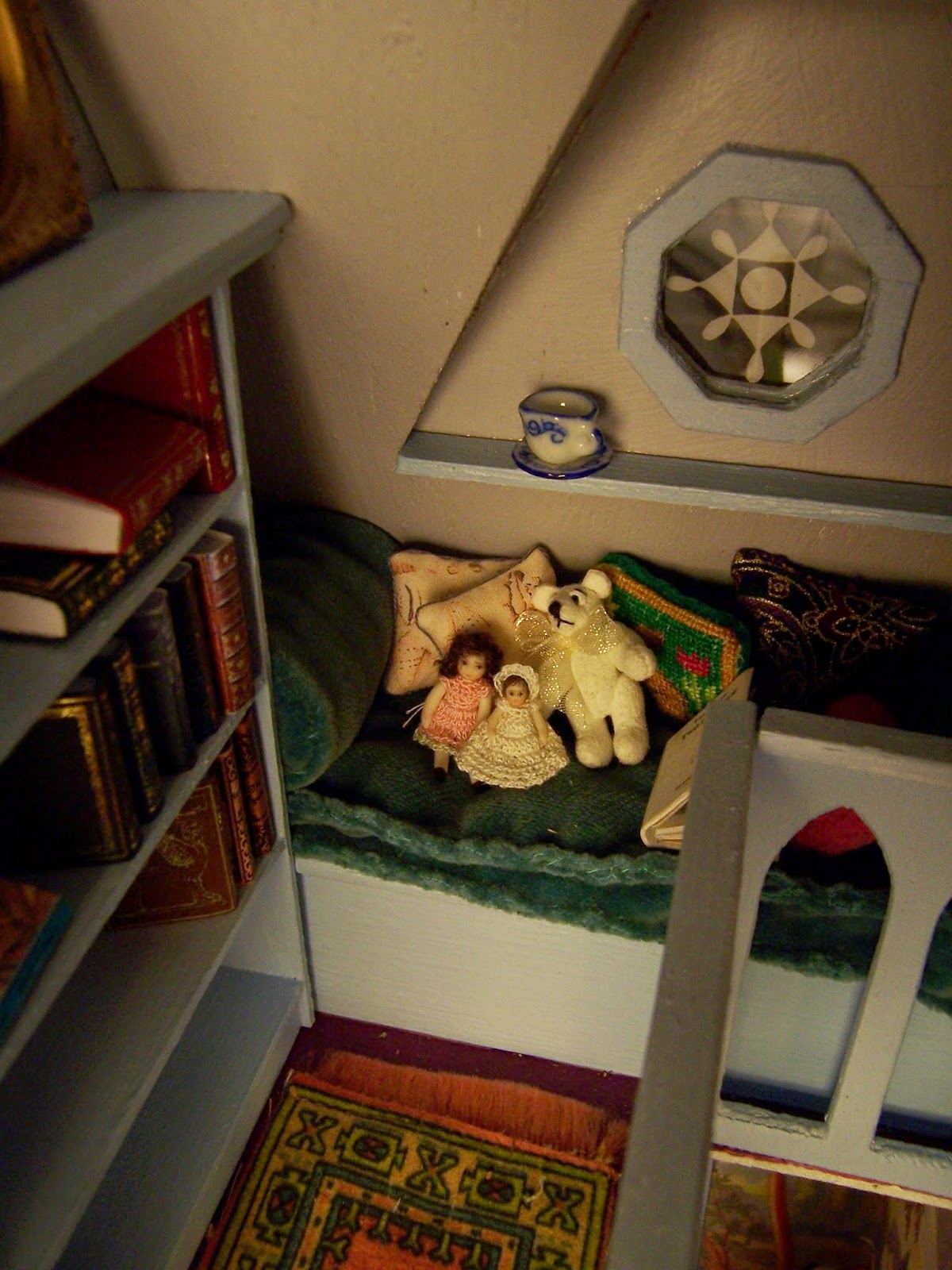 Little Rose thought she better go see what was happening.... 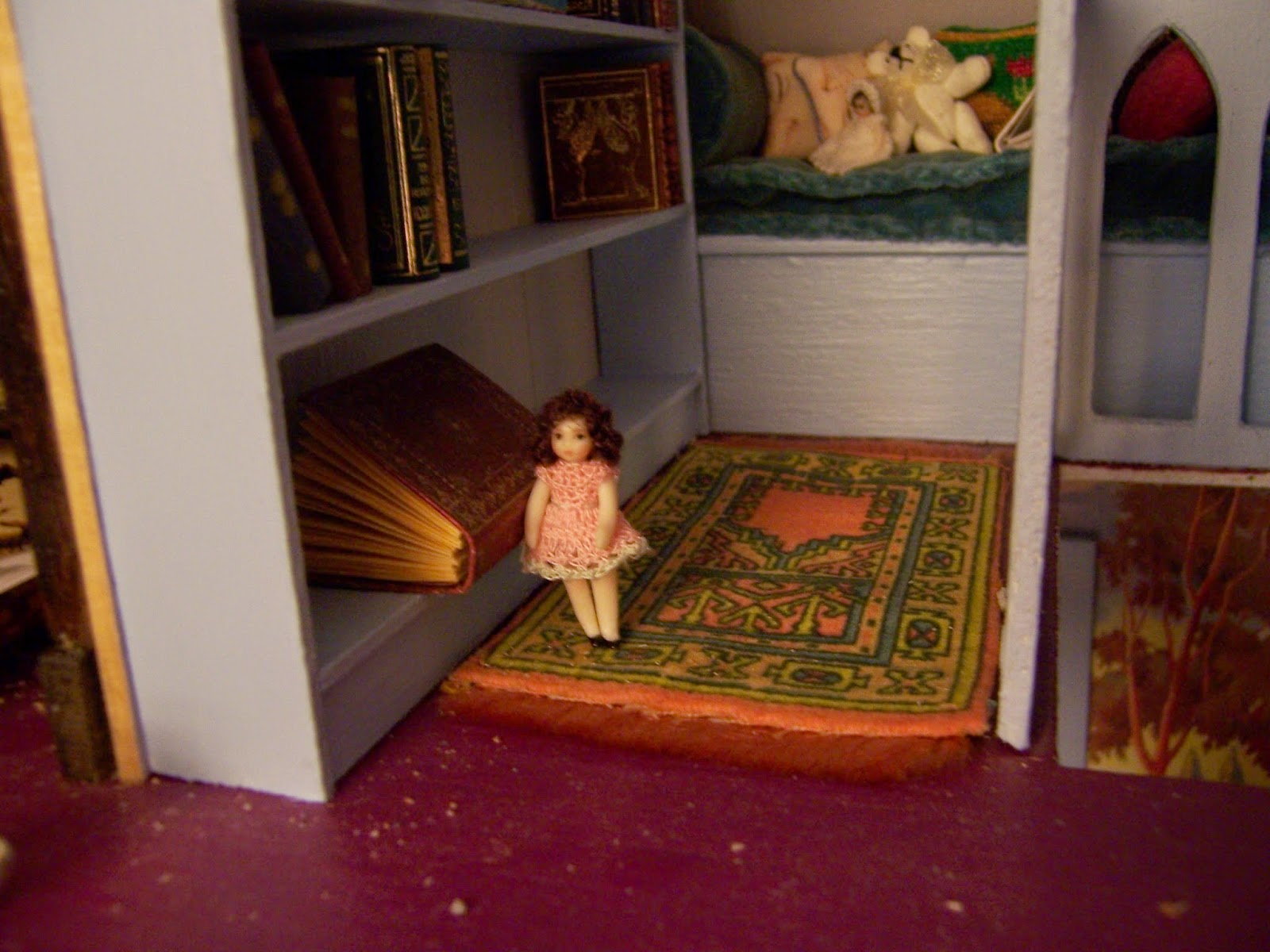 She went to the top of the stairs, but she couldn't see anything....
so she carefully lowered herself backwards over the stair edge.... 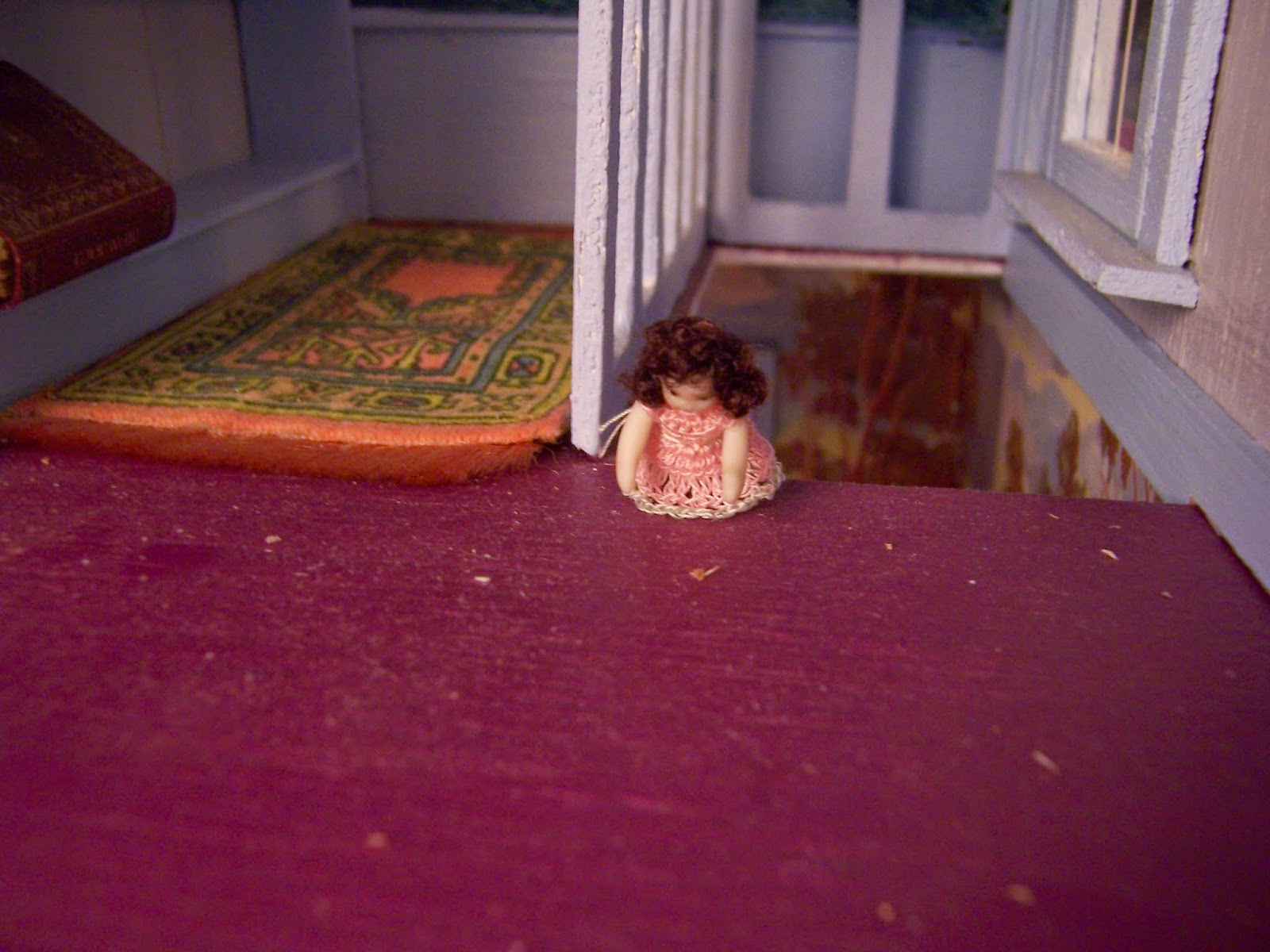 One step at a time, she thought she could make it all the way down the stairs! 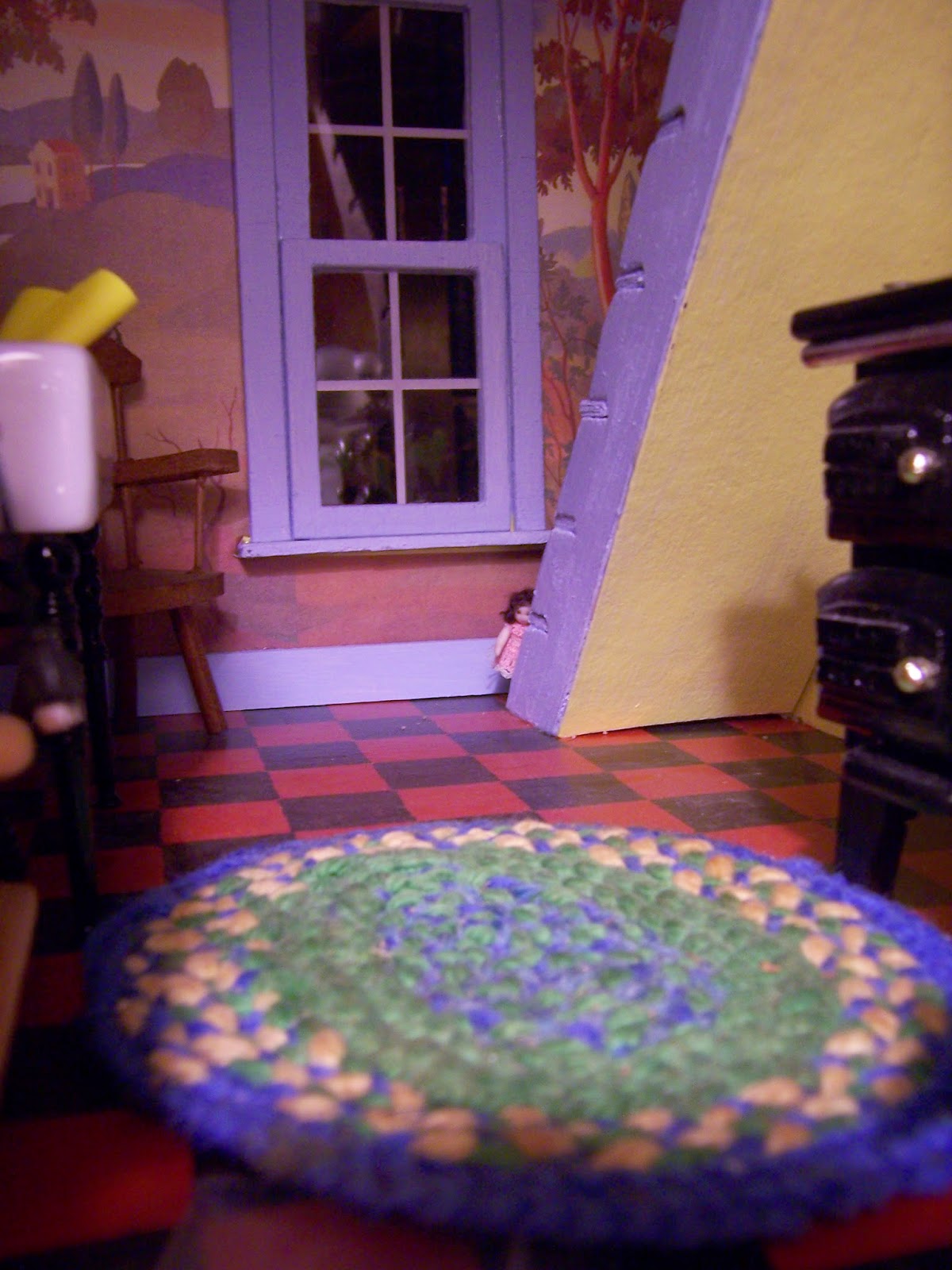 And sure enough, she made it safely all the way to the bottom!
She was only a little Surprised to see Samuel Whiskers in the Kitchen. 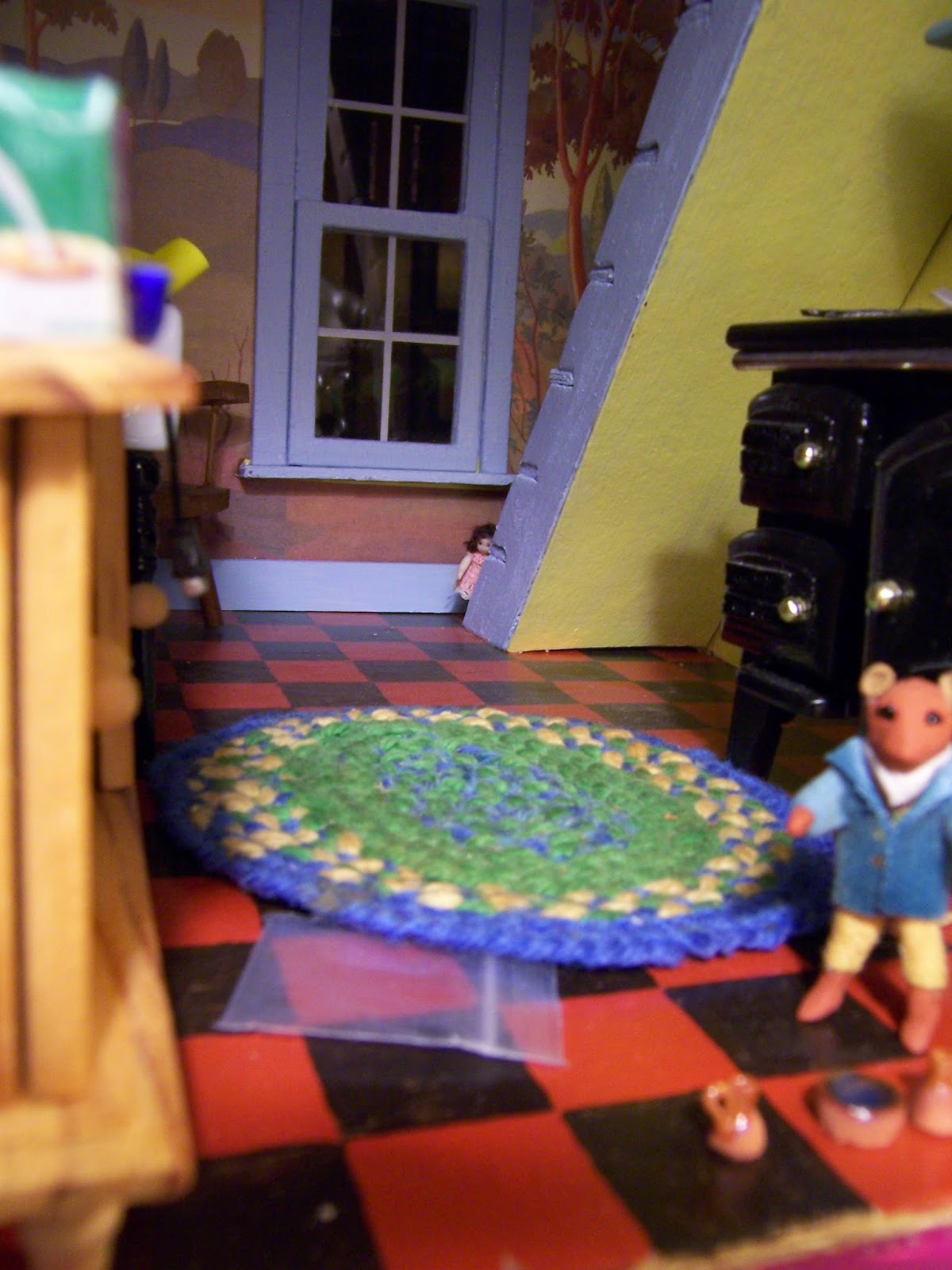 He didn't notice Little Rose at first, he was so intent on the ceramic dishes! 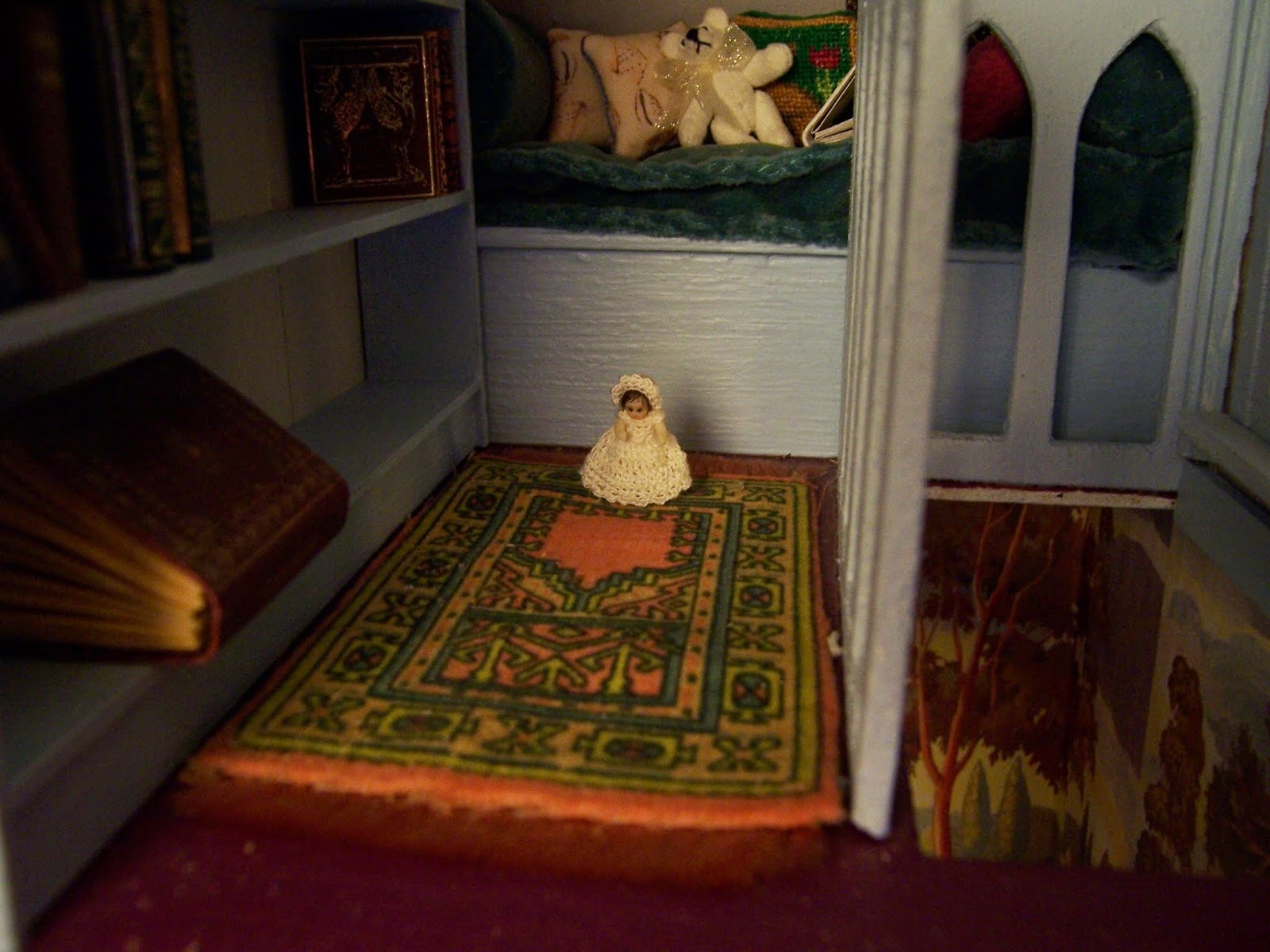 About that time, Sweet Pea decided
(as little sisters will...)
that she didn't want to be left behind! 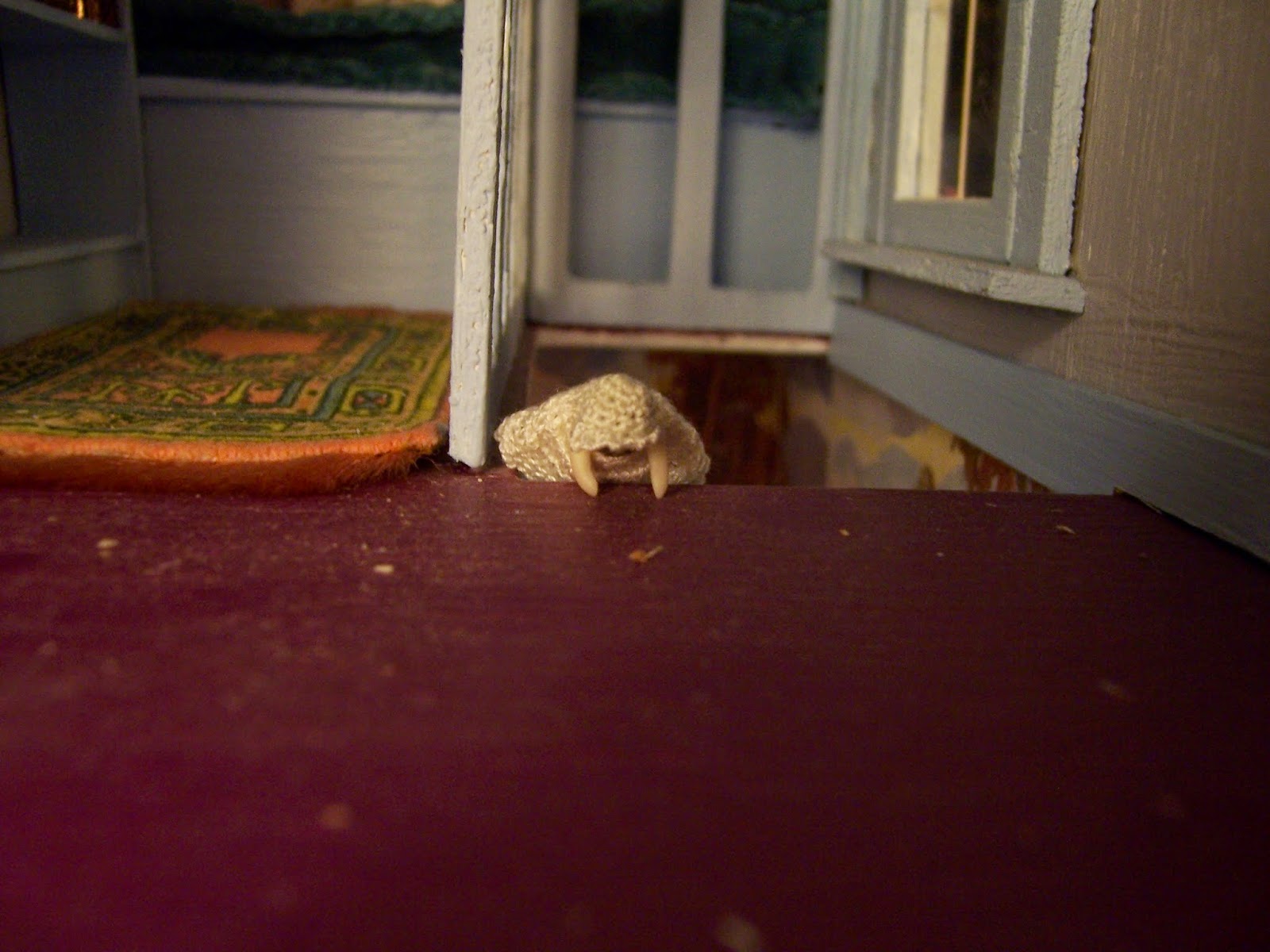 If Little Rose could make it down the stairs, then so could she! 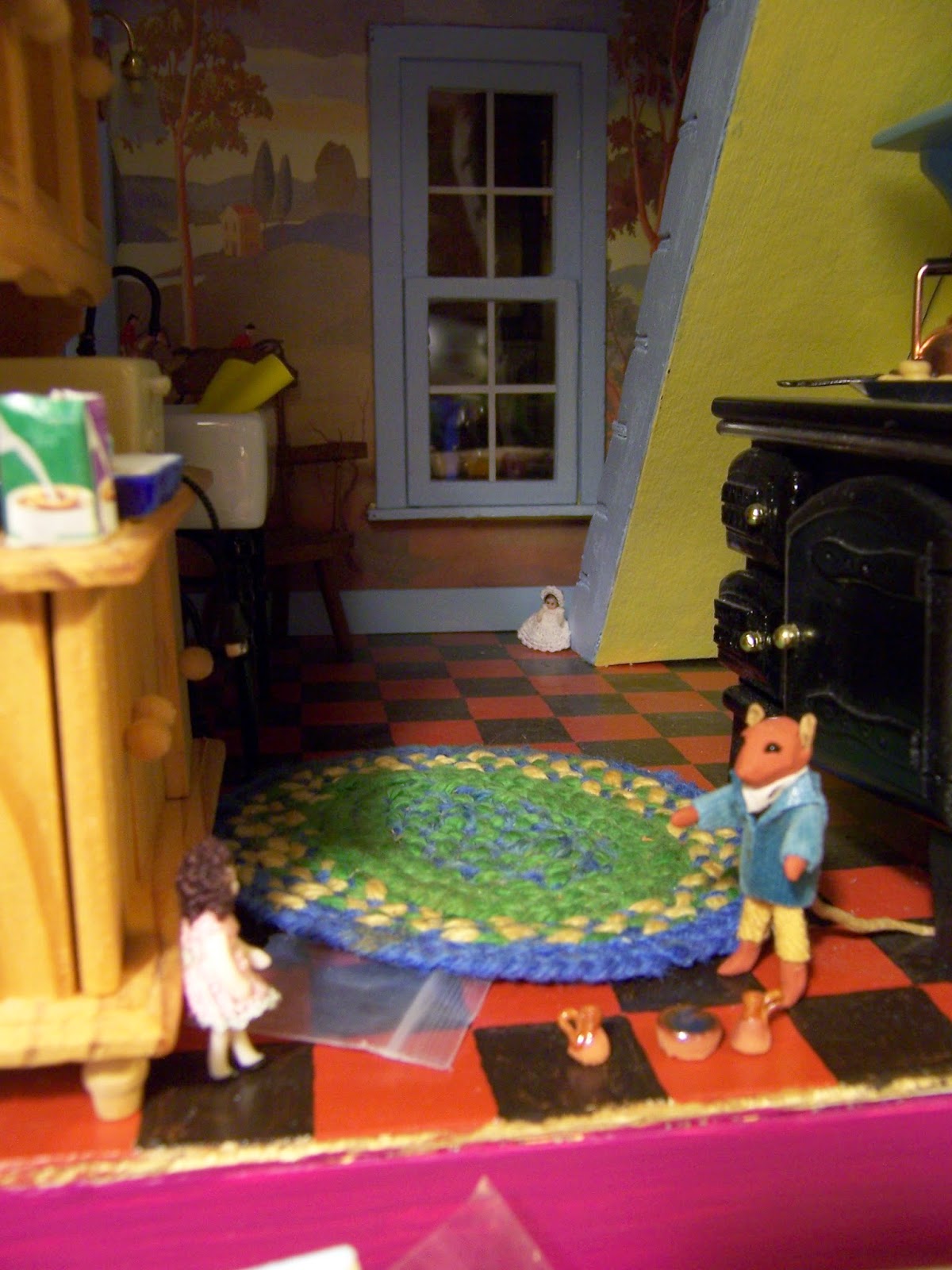 And so she did!

Little Rose was asking Samuel Whiskers where he was taking the dishes...
She was feeling hungry and thought they looked just the Perfect size to eat from! 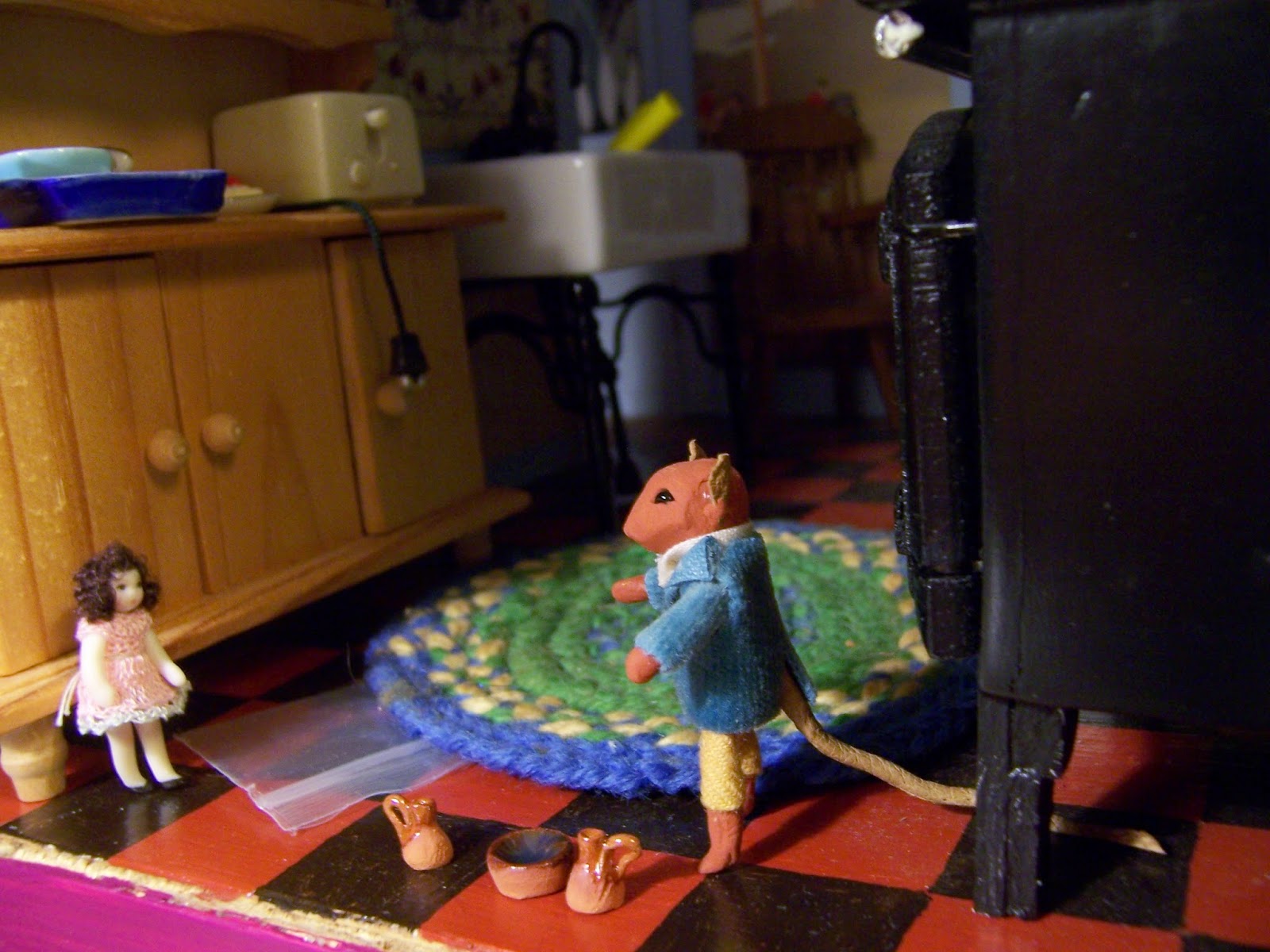 Samuel was explaining that they were newly Imported
and he was carrying them to the Tree House. 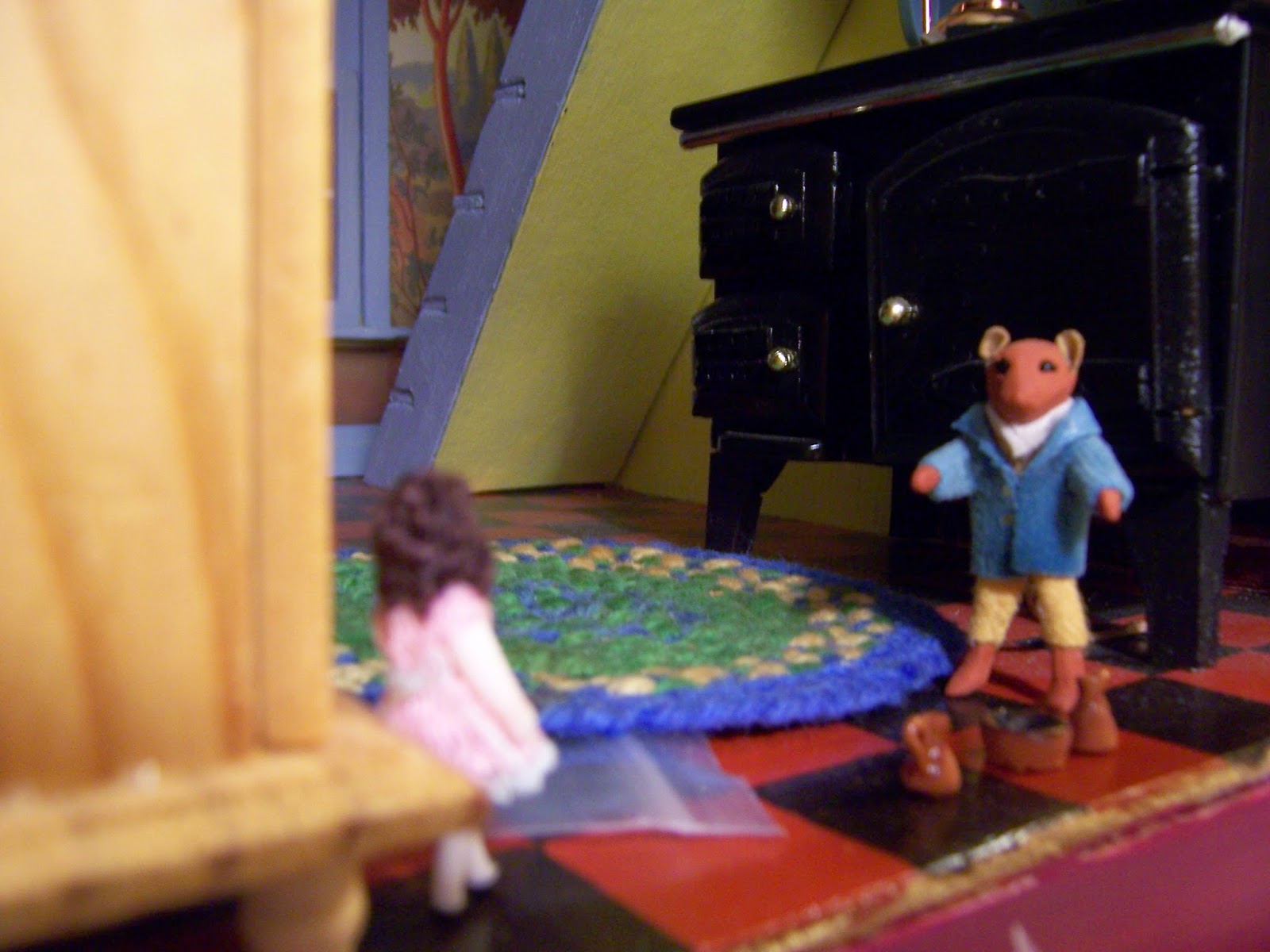 When Little Rose noticed Sweet Pea,
she ran over to her and they decided to ask if they could help.
They had never been to the Tree House before. 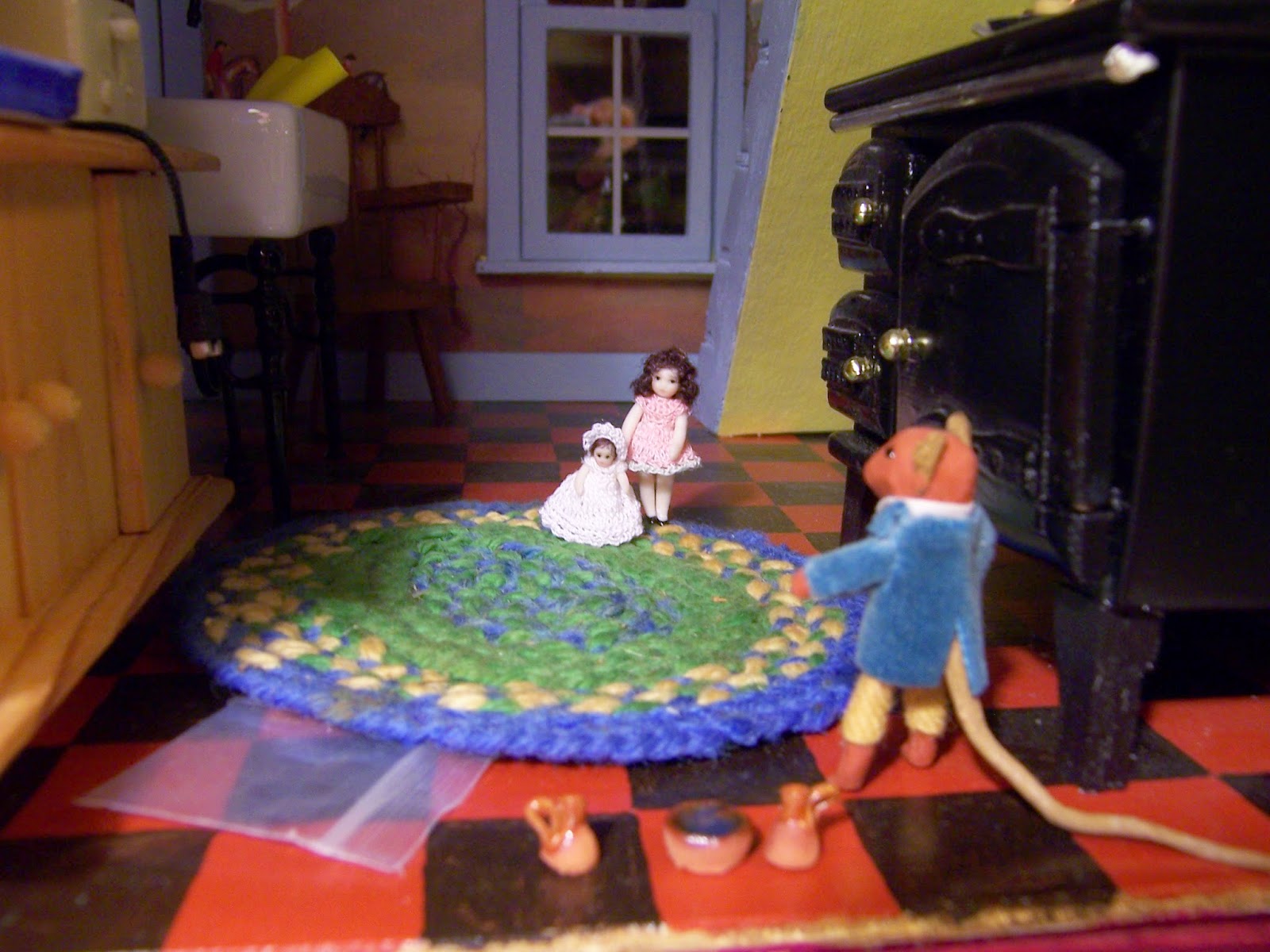 Samuel Whiskers tried to tell them they should stay at home and not bother him...
He didn't think they could help much, being so little. 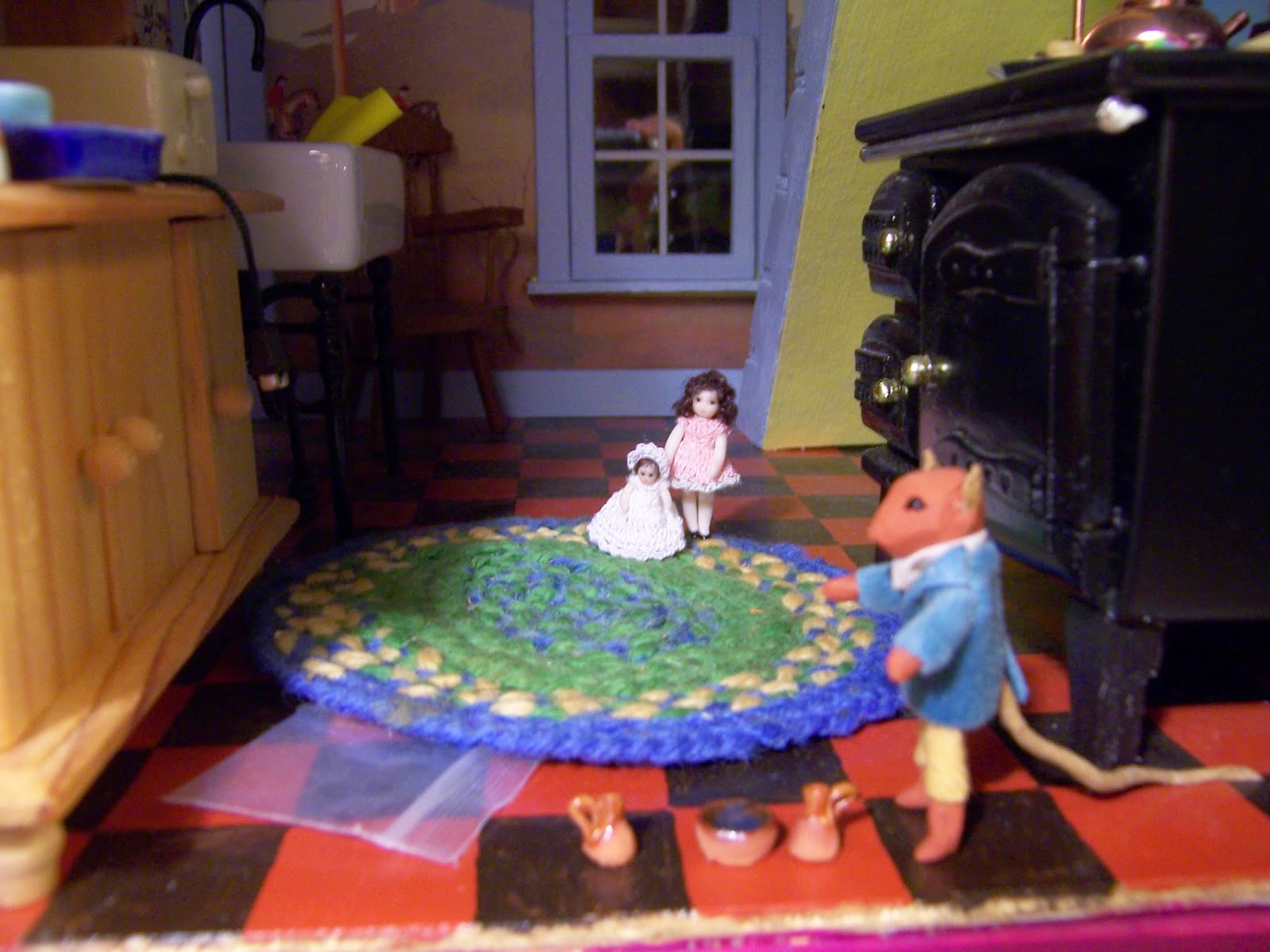 But when they stood there looking hungry, he relented and said
"Very well, you can come to the Tree House. Anna Maria will feed you..." 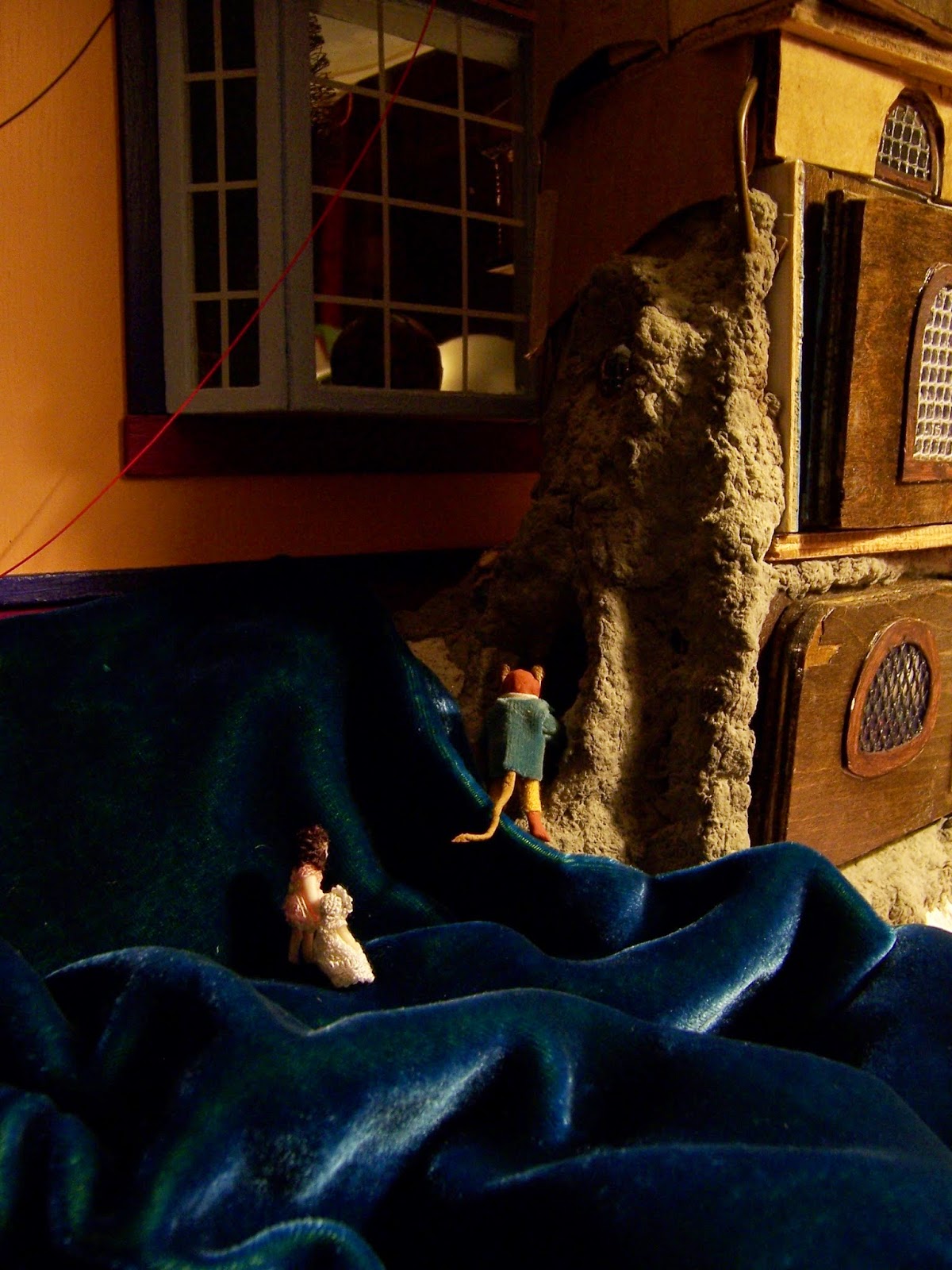 So they followed him out to the Huge Old Tree beside the Folly.....
Where there was a door tucked between the roots..... 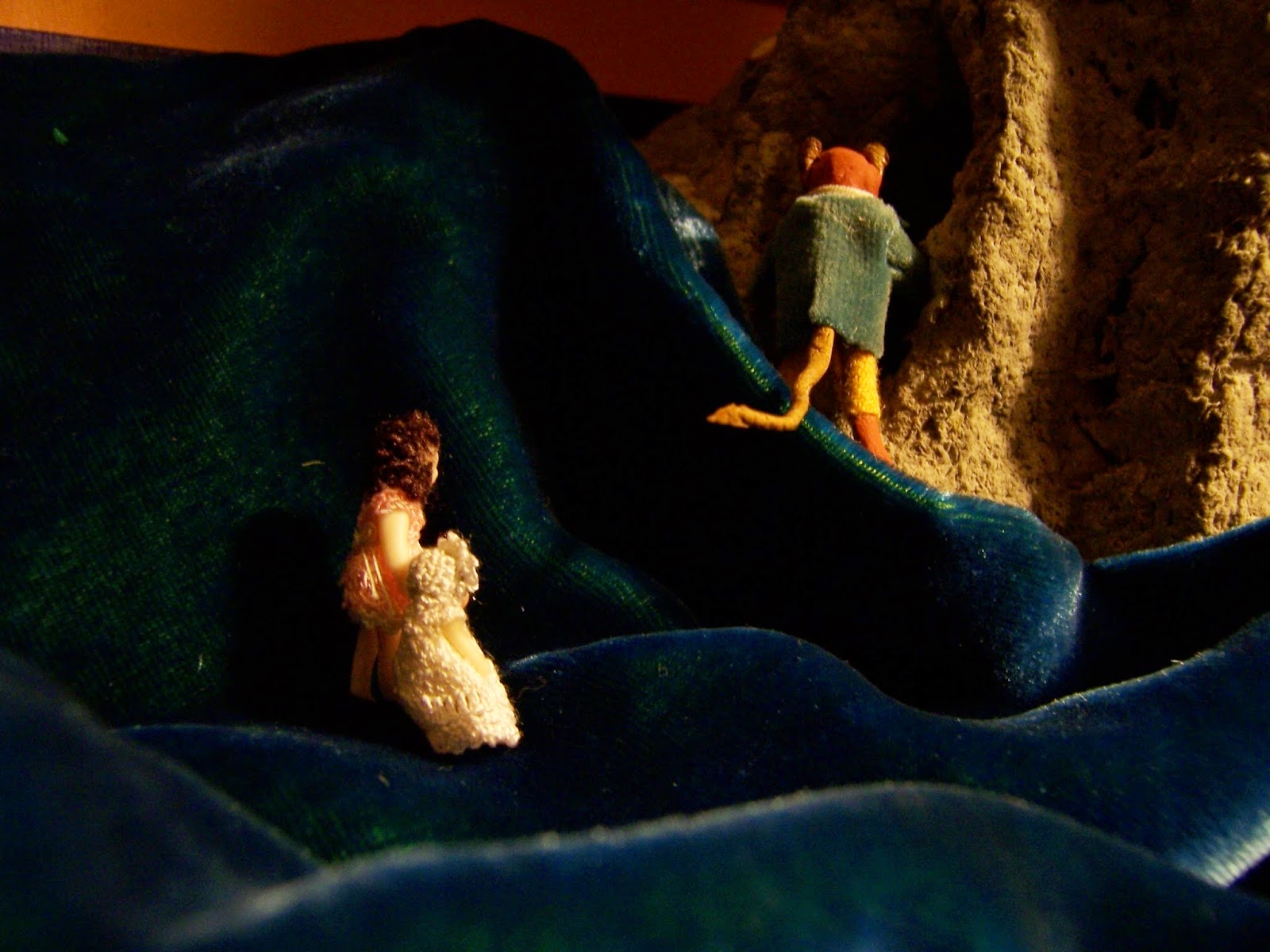 And Samuel Whiskers suddenly Disappeared inside!
They followed as quickly as they could! 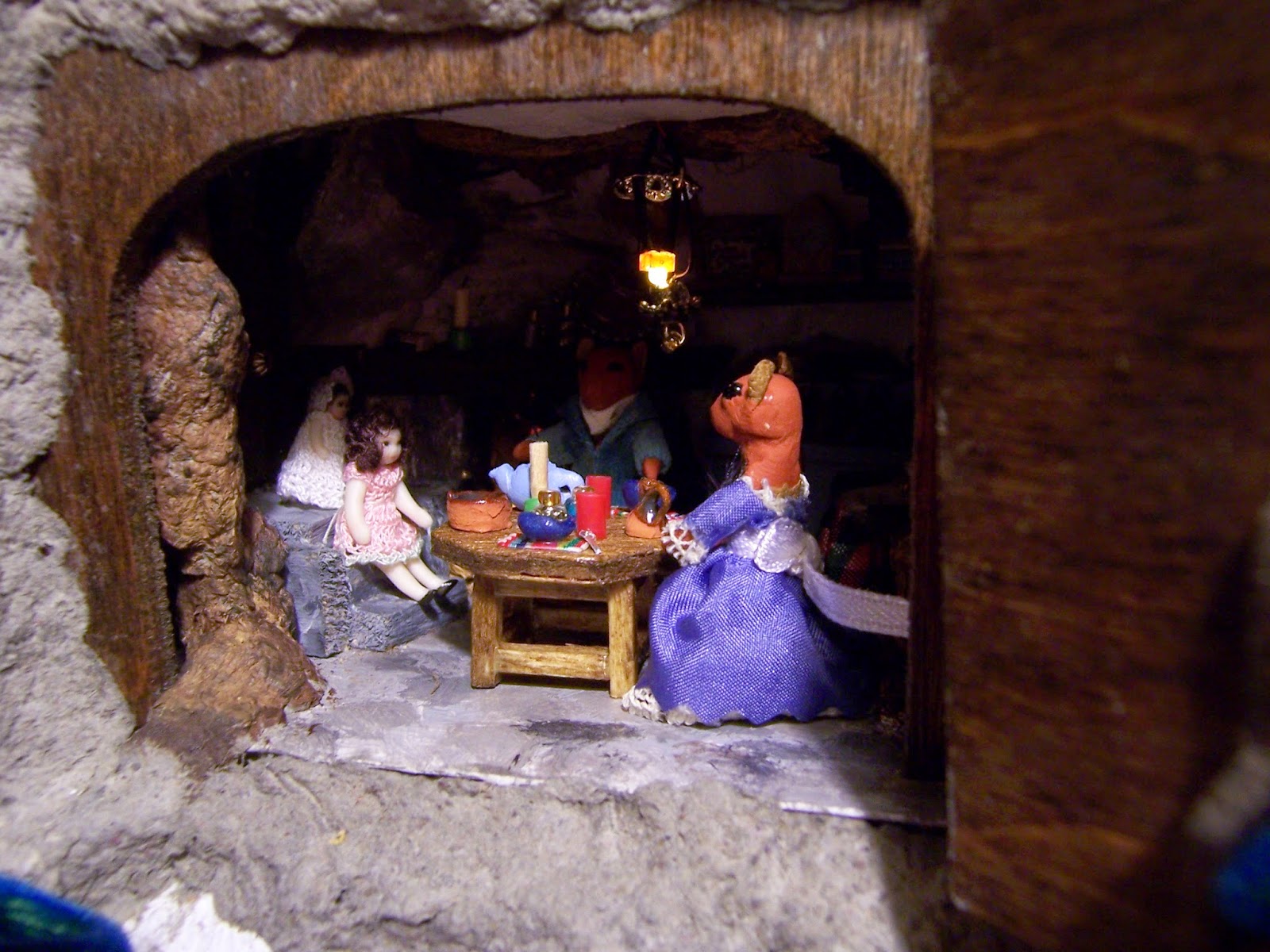 It led them into a snug little kitchen tucked under the Tree!
Anna Maria was rather surprised to see the Little Dolls following Samuel Whiskers!
"We have guests, Anna Maria," he announced.
"They seem to be hungry," he added, a trifle apologetic.
"Perhaps we can try the new dishes..." 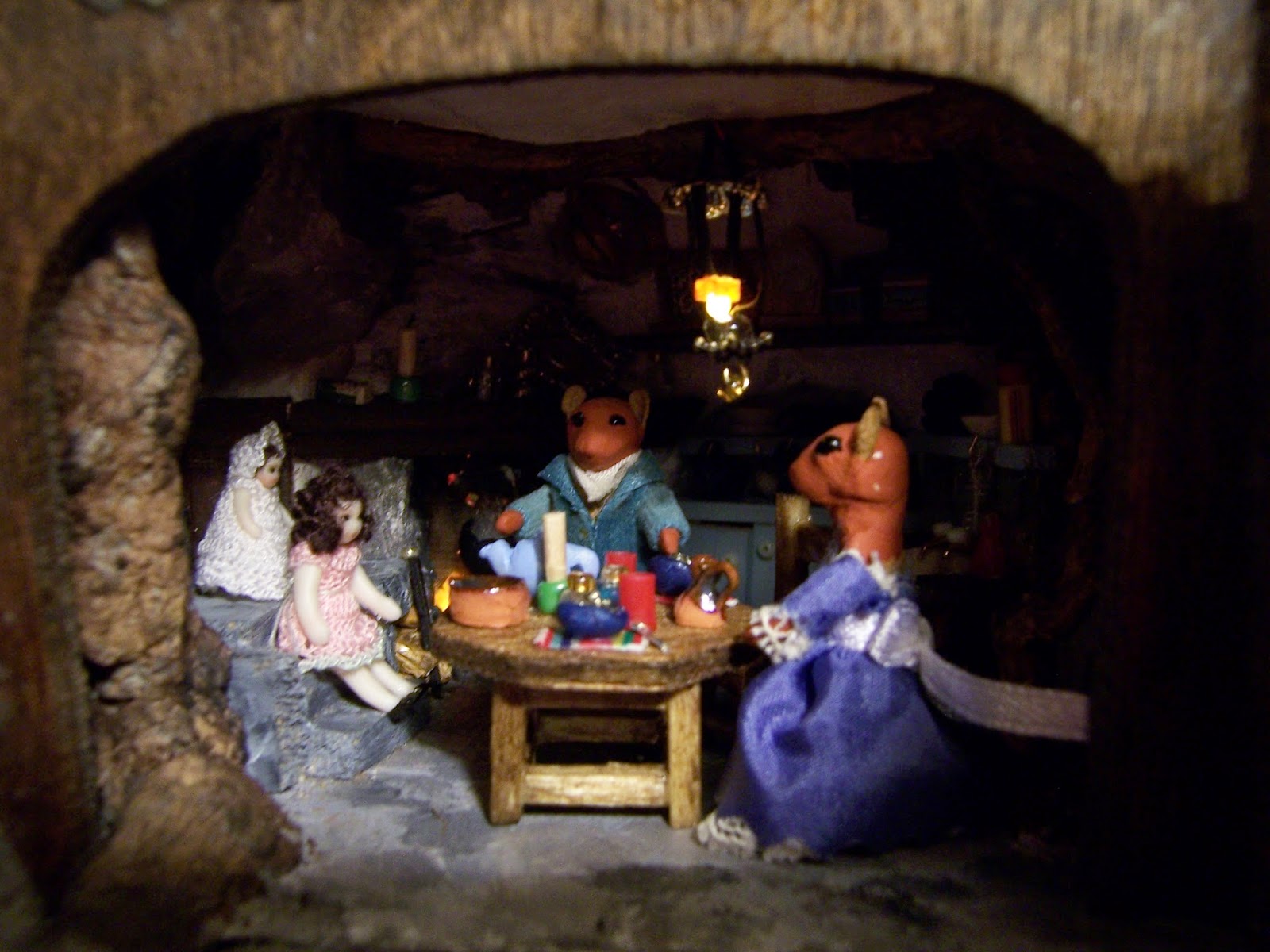 Anna Maria had already placed several on the table,
where they did indeed look Absolutely Perfect!!

These may be just a tiny little gift, Dear Readers,
But I think they are Treasures beyond compare....
And the Tiniest ceramic dishes I've ever seen!
(Thank you, Mom!)
Posted by Daydreamer at 9:10 PM